Cardinal Ugo Boncompagni was elected pope on May 13, 1572 after a one-day conclave. His election was supported by Spain where Cardinal Boncompagni had been nuncio (ambassador) for several years. His coat of arms shows a dragon with a truncated tail (the evil part of this imaginary animal). This is not always evident in some coats of arms or in statues of the dragon. 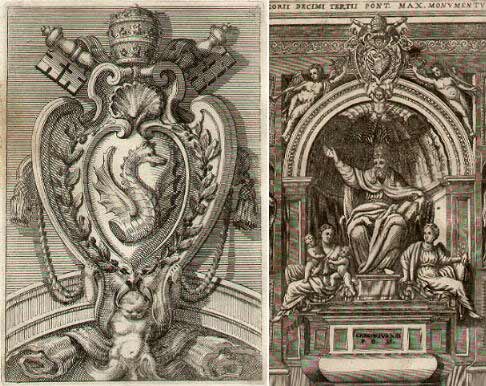 He was buried in S. Pietro near the part of the church (Cappella Gregoriana) erected under his pontificate and the monument was topped by a coat of arms, which Filippo Juvarra included in his 1711 book on the coats of arms of the popes (in the drawing the dragon is looking to the right, while in the actual monument it is looking to the left). The coat of arms was lost when a new monument to the Pope was designed by Camillo Rusconi a few years later (the dragon in the background of the page is part of this new monument). The dragon can also be seen in the coats of arms of the families Borghese and Del Drago.

Gregory XIII was born in Bologna in 1502 and he was always proud of his birthplace. He used to add Bononiensis to his name. In return Bologna in 1580 erected to the Pope a gigantic bronze statue (by Alessandro Menganti) in the front of Palazzo Comunale. The coat of arms was not spared by the effects of the French Revolution in Italy. The coat of arms of the pope inside the palace was deprived of the papal attributes. 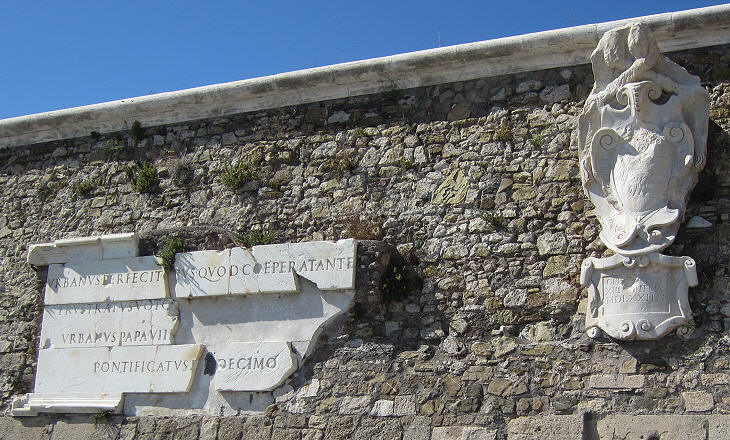 Coats of arm in the harbour of Civitavecchia

For the 1575 Jubilee Holy Year Gregory XIII enlarged the port of Civitavecchia which allowed pilgrims from France and Spain easy access to Rome by sea. The coat of arms celebrating the event was severely damaged when Civitavecchia was bombed during World War II (next to the coat of arms an inscription in honour of Pope Urban VIII).
Coats of arms of Gregory XIII can be found in many towns of the papal state (e.g. in a gate in Visso). 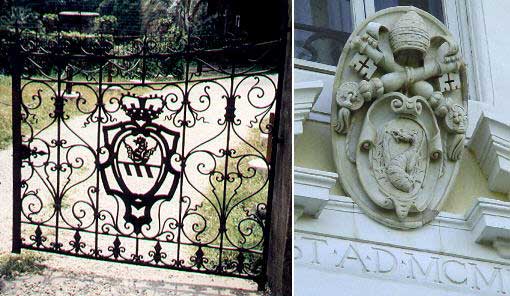 Near Rome the coats of arms of Gregory XIII had better luck. In 1681 the Boncompagni inherited the possessions of the Ludovisi another family from Bologna (Pope Gregory XV) and the coat of arms was modified to include a reference to the heraldic symbol of the Ludovisi. The Ludovisi had a large Villa near Porta Pinciana in Rome and another Villa near Albano in the Castelli Romani. A coat of arms of Gregory XIII is also in Villa Taverna, the residence of the Ambassador of the United States in the Parioli neighbourhood (by courtesy of Mr. Tom Wukitsch).

Gregory XIII was confronted with the challenge posed by the other Christian religions in northern and eastern Europe. He founded Collegio Germanico, Collegio Greco (near S. Atanasio) and Collegio Inglese (near S. Tommaso di Canterbury). He is considered the second founder of Collegio Romano (the University was named after him). He started the enlargement of Archiginnasio della Sapienza. He was a lawyer and promoted new legislation also in urban development matters. Some of the streets that were completed by his successor Sixtus V were initially designed under Gregory XIII (Via Gregoriana is named after him). His main initiative in Rome had bad luck: a new bridge he built lasted only a few years and it is known as Ponte Rotto (broken bridge). 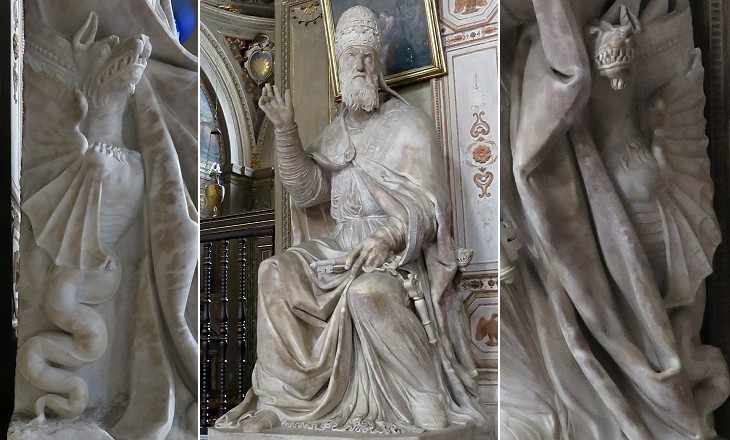 Statue of Gregory XIII by Pietro Paolo Olivieri in S. Maria in Aracoeli

He brought order to the relationships between the papacy and the formally surviving political bodies of the City of Rome. The tower of Palazzo Senatorio, the symbol of communal life was erected under his pontificate and he was celebrated in a statue in the main hall of the building (the statue was moved in the late XIXth century to nearby S. Maria in Aracoeli). The statue shows on the side of the seated pope a dragon (with the appearance of a faithful dog): this idea was copied in similar statues showing Sistus V (with a lion instead of the dragon) and Paul V (with an eagle added to the dragon). 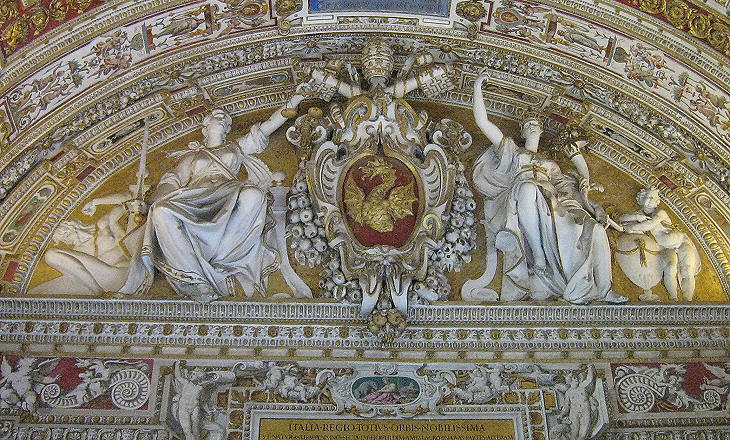 Gregory XIII was also supportive of the Church taking the lead in scientific matters. This statement is in contrast with the general view which sees the Church in a rearguard position in these matters, but in the late XVIth century and in the first part of the next century, at least until Galileo in 1633 was forced to abjure his astronomical theories, Rome was home to many scientists. An example of the progress made in topography is Galleria delle Mappe Geografiche: the gallery is frescoed with detailed maps of Italy, including views of the main ports. The ceiling is full of stuccoes and paintings and the entrances to the gallery are decorated with the coats of arms of Gregory XIII. 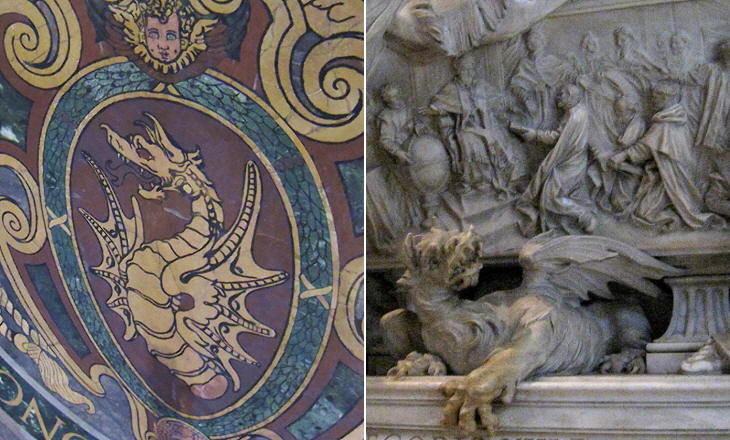 (left) Detail of the coat of arms in Cappella Gregoriana; (right) relief showing the three scientists who developed the new calendar being introduced to the Pope

Gregory XIII had the final say in the decoration of Cappella Gregoriana; a large circular marble inlay with his coat of arms is at the centre of the chapel (it was copied by the popes who built the other parts of the basilica). The Pope was buried in a monument which was replaced by a new one in 1715-1723. One of the purposes of this new monument was to celebrate the Reform of the Calendar, by which in 1582 Gregory XIII endorsed the recommendations of a group of scientists and established new rules for the leap year. The ancient civilizations had calendars based on the moon cycle, with various rules to relate it to the sun cycle (succession of years with 12 or 13 months). The Julian calendar named after Julius Caesar introduced a solar calendar of 365 days, every fourth year having 366 days. In the XVIth century a discrepancy between the dates of the solstices and the actual solstices became evident and research indicated that the solar year was slightly shorter than 365 days and 6 hours (as assumed in the Julian Calendar). The Reform of the Calendar introduced by Gregory XIII (hence Gregorian Calendar) cancelled the leap years at the end of the century (but not in those like 2000 which are divisible by 4). The Reform abolished the days between October 4 and October 15, 1582 to readjust the calendar for the past discrepancies. The Reform was introduced in the Catholic countries, but only in the XVIIIth century in England and in the XXth century in Russia (that's why the October Revolution occurred in November 1917). The Orthodox Church has never endorsed the Reform of the Calendar introduced by Gregory XIII and for this reason the Orthodox Christmas and Easter days fall some days later.