May 1815. At five minutes past ten I first saw the Holy City, even the Turks call it so, which we entered at twenty minutes past ten by the most complete neck breaking road that ever man passed over. I first saw it from a hill commanding it which I descended to enter it by the gate of Damascus. It presented a confused view of trees, roofs of houses and domes among which were conspicuous those of the Mosque of Omer occupying the site of Solomon's Temple and of the Holy Sepulchre. On entering the gate (..) I rode immediately to the Roman Catholick convent of San Salvador. (..) (The monks) welcomed me most cordially. They expressed the greatest astonishment on hearing that I had come (from Nazareth) through Samaria and told me I was the first European who had come by that road in a Frank dress for many years.
William Turner - Journal of a Tour in the Levant - 1820
At last, away in the middle of the day, ancient bite of wall and crumbling arches began to line the way - we toiled up one more hill, and every pilgrim and every sinner swung his hat on high! Jerusalem!
Perched on its eternal hills, white and domed and solid, massed together and hooped with high gray walls, the venerable city gleamed in the sun. So small! Why, it was no larger than an American village of four thousand inhabitants, and no larger than an ordinary Syrian city of thirty thousand. Jerusalem numbers only fourteen thousand people.
Mark Twain - The Pilgrims Abroad - 1869 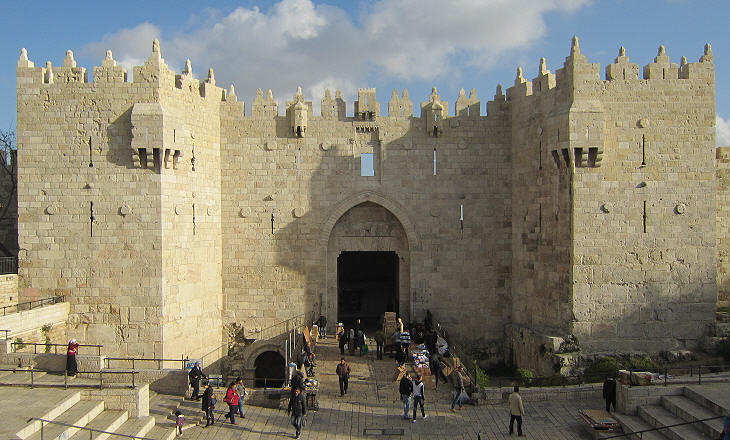 There was a gate to the north part of the city called the gate of Ephraim, which was probably about the same place where the Damascus gate now is. (..) I saw to the east of the Damascus gate a fossee cut into the rock, which they now fill up with the rubbish of the city.
Richard Pococke - A Description of the East and Some Other Countries - 1745
Just after noon we entered these narrow, crooked streets, by the ancient and the famed Damascus Gate, and now for several hours I have been trying to comprehend that I am actually in the illustrious old city where Solomon dwelt, where Abraham held converse with the Deity, and where walls still stand that witnessed the spectacle of the Crucifixion. Twain
The Gate of Damascus was rebuilt in 1536-1542 by Ottoman Sultan Suleyman I in the frame of an overall reconstruction of the walls. It is the finest gate of the city and it stands on the site of a triumphal gate of Aelia Capitolina, the town built by Emperor Hadrian on the ruins of Jerusalem which had been destroyed when it was seized by Titus, Emperor Vespasian's son in 70 AD.
You may wish to compare the walls and gates of Jerusalem with those of Damascus. 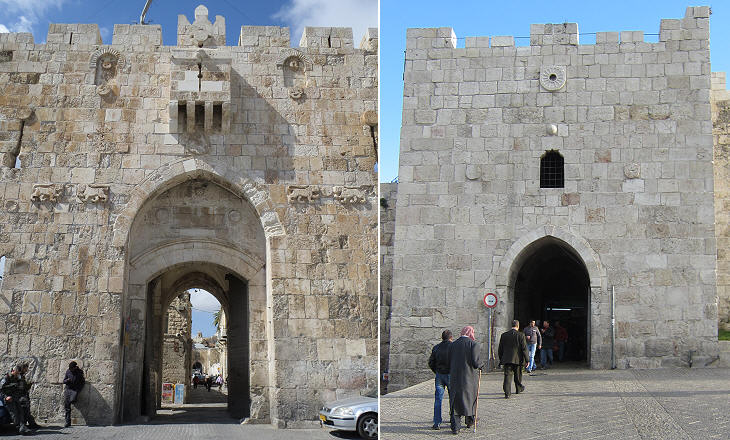 At the east end of the street, which is north of the temple, is the gate of St. Stephen. Without this gate, which is on the east side of the city, that saint was put to death; and going down a steep descent towards the vale of Jehosophat, they shew a part of the rock on which, they say, St. Stephen's body fell when he was stoned, and made an impression on the rock. Pococke
The gates are five: that of David south, of Bethlehem south west, of Bab Isbot, the name has no meaning, south east, of Damascus north, of Our Lady Mary north east. Besides these is the Golden Gate on the east wall, but this is now shut up. Turner
The gates of Jerusalem, have several names. Gate of Our Lady Mary aka Gate of St. Stephen was so named because it led to the Tomb of Mary, but today it is best known as Lion Gate because of the reliefs which decorate it. Turner did not mention Herod's Gate, which perhaps was shut when he visited Jerusalem. 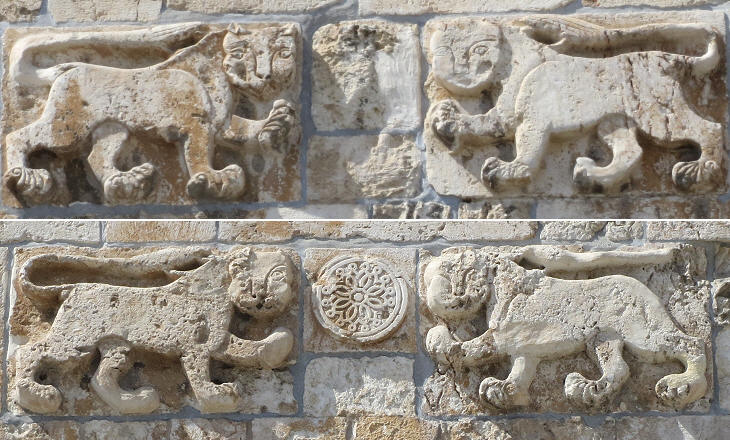 Lion Gate: details of the reliefs

Most texts attribute the reliefs portraying lions to Mameluke Sultan Baibars who conquered the Holy Land in the XIIIth century. His heraldic symbol was a lion (see that at Nimrod Castle), but he was not the only Muslim ruler who was associated with lions and similar reliefs can be seen elsewhere, e.g. at Silvan in Turkey. 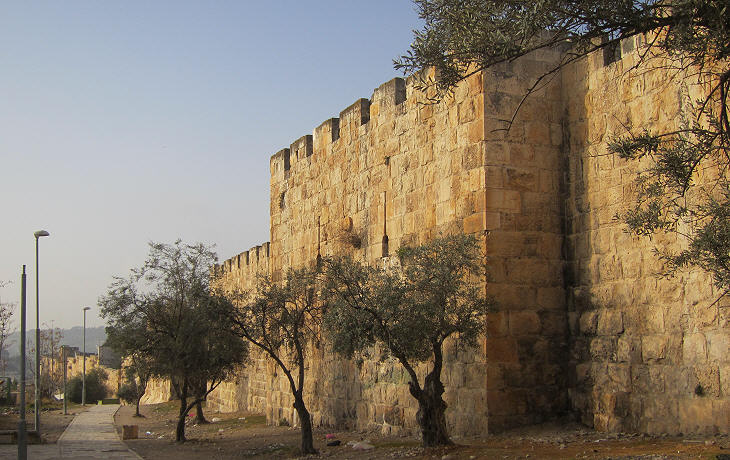 I was willing before our departure to measure the Circuit of the City; so taking one of the Fryars with me, I went out in the afternoon, in order to pace the Walls round. We went out at Bethlehem Gate, and proceeding on the right hand came about to the same Gate again. I found the whole City 4630 paces in Circumference. (..) The reduction of my paces to yards, is by casting away a tenth part. Ten or my paces making nine yards, by which reckoning the 4630 paces amount to 4167 yards, which make just two miles and a half!
Henry Maundrell - A Journey from Aleppo to Jerusalem at Easter - 1697
Overall the walls of Jerusalem are in pretty much the same condition they were when Turner and Twain visited the city. Their surroundings instead have significantly changed because of the development of the modern city. The eastern side, thanks to the presence of cemeteries, is the only one where it is possible to walk along the walls without the noise of traffic. 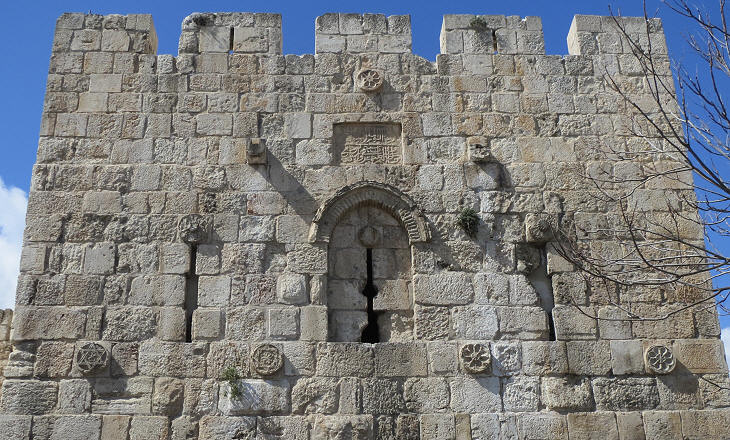 When Sultan Suleyman ordered the reconstruction of the walls he did not fear an enemy would ever lay siege to Jerusalem, because they do no not include bastions, outer works, battlements for the placement of guns and other features which were required by cannon warfare. Other details of the walls which show their almost decorative purpose

I set out from the gate of David (aka Sion Gate) to walk round the city which I accomplished at the rate of about three miles an hour in forty seven minutes. I judged from the time it took me that Maundrel's computation of two and a half miles for the extent of the walls is tolerably correct. The walls were so irregular that I could hardly judge of their form, but I should think them an irregular heptagon. They have square towers at regular intervals. Turner
A fast walker could go outside the walls of Jerusalem and walk entirely around the city in an hour. I do not know how else to make one understand how small Jerusalem is. Twain The Moslems watch the Golden Gate with a jealous eye, and an anxious one, for they have an honored tradition that when it falls, Islamism will fall and with it the Ottoman Empire. It did not grieve me any to notice that the old gate was getting a little shaky. Twain
In 1853 the Ottoman Empire was referred to as "the sick man of Europe" by Tsar Nicholas I and Twain had this sentence in mind when he wrote about the tradition of the Golden Gate (which was similar to that regarding the Colosseum in Rome). 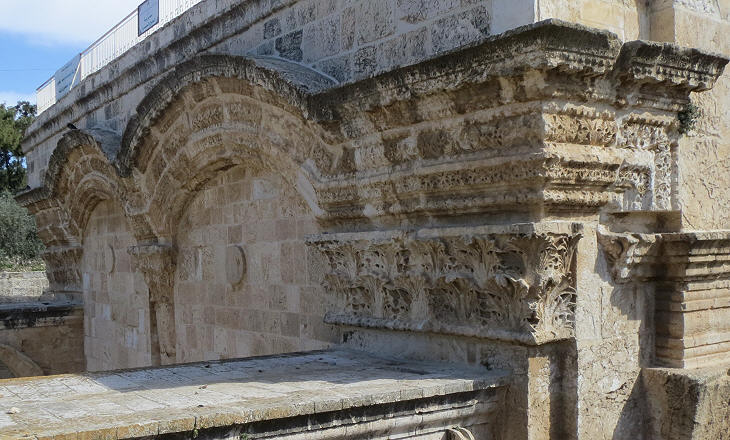 Golden Gate: detail showing the ancient lintels which were utilized for its construction (see some similar details of the "martyrion" of St. Simeon near Aleppo)

The Golden Gate gave direct access to the great terrace where the Temple stood and which after the destruction of the latter housed pagan temples, churches and eventually mosques. Its design clearly indicates that it was a Byzantine ceremonial gate which was used for processions. The Ottoman reconstruction did not alter its original design. The same name indicated a Byzantine gate at Constantinopolis. 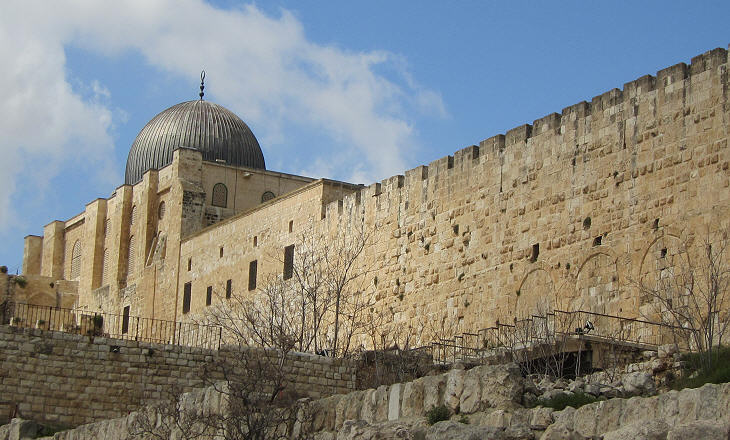 Triple Gate and above it the Mosque of Omar

The area of the Temple had other ceremonial gates which all were walled up by the Ottomans. Excavations have been carried out along the southern walls to unearth stairs which Jewish pilgrims utilized to access the Temple before its destruction. (left) Bab al-Magharibeh (enlarged to allow the passage of cars); (centre) Sion Gate; (right) detail of its decoration made up with ancient capitals

Aelia Capitolina had two main cardi (north-south streets) which from Damascus Gate reached the southern walls near the Temple and on Mount Sion (see an ancient map). Bab al-Magharibeh, so named after migrants from Maghreb (North-Western Africa) who lived in the area, was referred to as "Bab Isbot" by Turner. It is situated near the Temple on the site of the ancient gate.
When Turner visited Jerusalem Sion Gate was known as David's Gate because it leads to the assumed tomb of the king. It does not correspond to the Roman gate which was located to its east. Jaffa Gate is the only gate on the western side of the walls and at Turner's time the road to Bethlehem started from this gate which was named after it, rather than after Jaffa. It is a typical elbow-shaped gate (similar to the Land Gate of Acre) upon which Ottoman Sultan Abdul Hamid II built a clock tower in 1908. It was pulled down by British authorities in 1922. 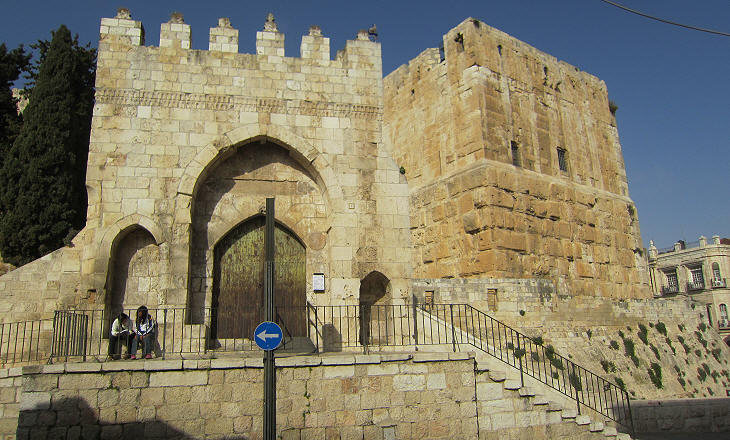 Entrance to the Citadel

This morning early I walked about the city with Signor Matthia, the dragoman of the convent, to visit the remarkable places within the walls of the city. We went first to the castle which I inspected after having obtained leave from the Aga of it. The pilgrims are not admitted here. It is large and might be strong, but like most old buildings in the hands of the Turks is falling to ruins. The fosse is now dry and apparently has long been so for a large olive tree flourishes in it and of only thirteen cannon that I saw few have serviceable carriages. From a minaret in the castle I had a commanding view of the city and observed the situation of the leading buildings. Turner 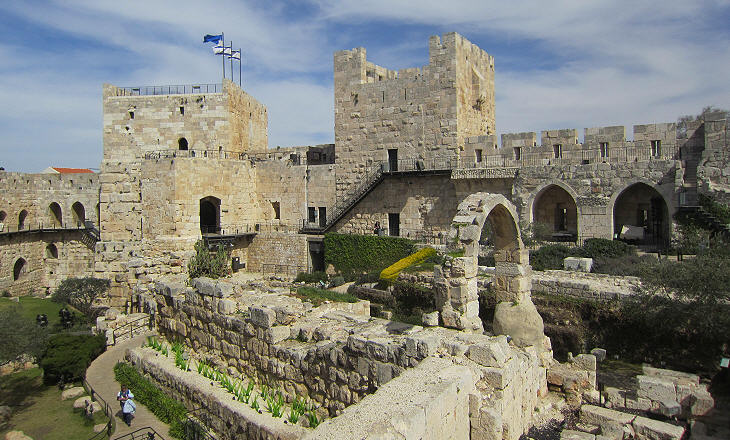 Interior of the Citadel

The Citadel was the only state-of-the-art Ottoman fortification of Jerusalem. It was designed with projecting bastions, a moat and outer works. Its integrity has been disrupted by massive excavations aimed at finding the layers of previous fortifications which include walls of all the periods of the history of the city, in particular the pre-Roman one. 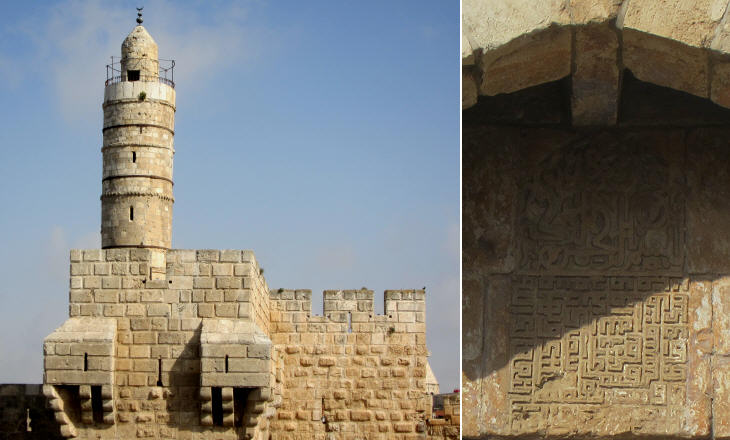 Citadel: (left) minaret added in 1635; (right) detail of the portal at the entrance with two inscriptions; the lower one which resembles a maze can be seen in other towns such as Diyarbakir in Turkey

The image used as background for this page shows a tower of the Citadel.