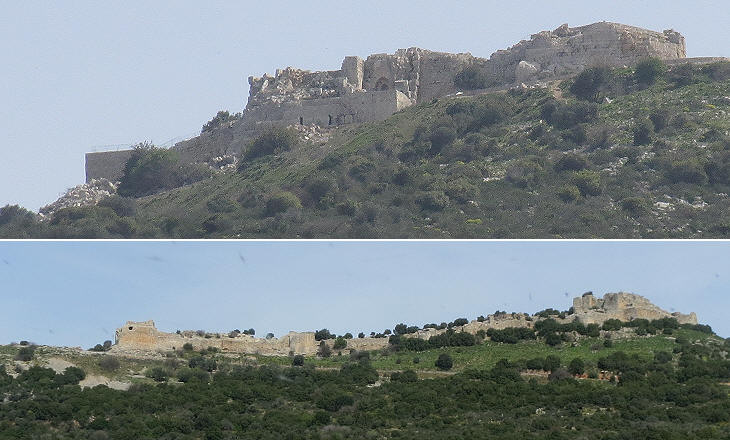 (October 1810) Immediately after my arrival I took a man of the village to shew me the way to the ruined castle of Banias, which bears E. by S. from it. It stands on the top of a mountain, which forms part of the mountain of Heish (Golan), at an hour and a quarter from Banias; it is now in complete ruins, but was once a very strong fortress. Its whole circumference is twenty-five minutes. (..) The castle has but one gate on the south side. I could discover no traces of a road or paved way leading up the mountain to it. (..) In winter time the shepherds of the Felahs of the Heish, who encamp upon the mountain, pass the night in the castle with their cattle.
Johann Ludwig Burckhardt - Travels in Syria and the Holy Land (Journal of a tour from Damascus in the Countries of Libanus and Anti-Libanus) - publ. 1822
Two hours later we reached the foot of a tall isolated mountain, which is crowned by the crumbling castle of Banias, the stateliest ruin of that kind on earth, no doubt. It is a thousand feet long and two hundred wide, all of the most symmetrical, and at the same time the most ponderous masonry. The massive towers and bastions are more than thirty feet high, and have been sixty. It is of such high antiquity that no man knows who built it or when it was built. It is utterly inaccessible, except in one place, where a bridle path winds upward among the solid rocks to the old portcullis. The horses' hoofs have bored holes in these rocks to the depth of six inches during the hundreds and hundreds of years that the castle was garrisoned. We wandered for three hours among the chambers and crypts and dungeons of the fortress, and trod where the mailed heels of many a knightly Crusader had rang, and where Phoenician heroes had walked ages before them.
Mark Twain - The Innocents Abroad - 1869. 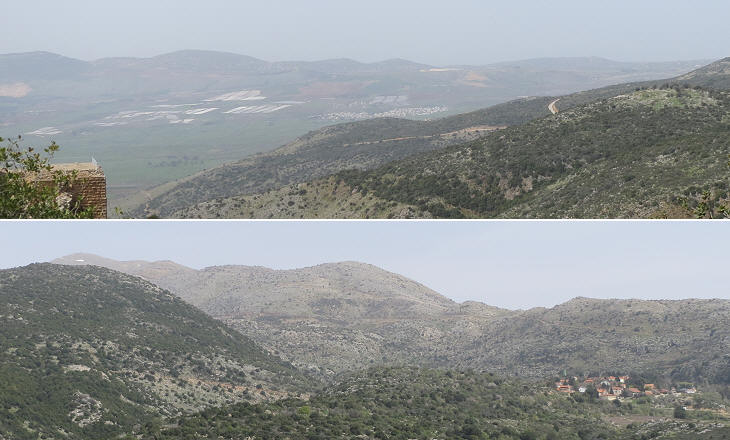 (above) View westwards: the Upper Jordan Valley with Metulla (Israel) and the mountains of Anti-Lebanon in the background; (below) view eastwards: Mount Hermon in the background (left) and Majdal Shams, a Druze village in the Golan Heights (right) after which the UN-controlled Disengagement Zone between Israel and Syria begins (you may wish to see a Druze village in Syria)

The view from hence over the barren Heish, is magnificent. Burckhardt
The fortress is situated along the historical road linking Syria to the Holy Land and Twain considered it to be part of the latter because of its commanding views over the River Jordan valley. At that time the whole region was part of the Ottoman vilayet of Syria. In 1888 a Lebanon vilayet was created out of that of Syria. In 1922 the fortress was included in the territory of the French Mandate of Syria. In 1967 it was conquered by Israel and it is now one of the archaeological sites of the Israel Nature and Parks Authority.
Today the fortress is named after Nimrod, a biblical figure of mighty hunter and king, but when Twain visited it its Arabic name was Qalat al-Subeiba (Castle on the Cliff). 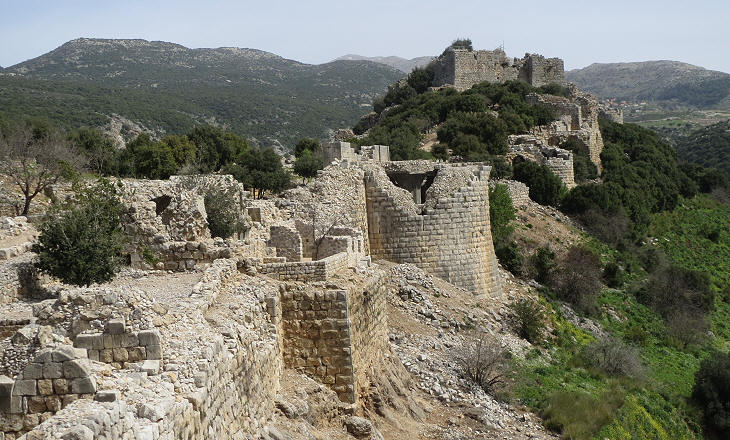 Eastern walls and the keep at the top of the fortress

It is surrounded by a wall ten feet thick, flanked with numerous round towers, built with equal blocks of stone, each about two feet square. The keep or citadel seems to have been on the highest summit, on the eastern side, where the walls are stronger than on the lower, or western side. On the western side, within the precincts of the castle, are ruins of many private habitations. (..) It seems to have been erected during the period of the crusades, and must certainly have been a very strong hold to those who possessed it. Burckhardt
Burckhardt assumed that the fortress had been built or conquered by the Crusaders, perhaps because the region housed many of their castles, but he was wrong. The purpose of the fortress, which was built in the early XIIIth century and was limited to the keep, was to defend Damascus from attacks coming from the south, either by the Crusaders who still retained Acre or by the Mameluke rulers of Egypt. Inscriptions (above-left and below) celebrating Mameluke Sultan Baibars and a relief (above-right) portraying a lion, his heraldic symbol

I saw no inscriptions though I was afterwards told that there are several both in Arabic and in Frank (Greek or Latin). Burckhardt
The fortress was strengthened by Baibars, Mameluke Sultan of Egypt who conquered the Holy Land and Syria between 1260 and 1271. In 1275 he entrusted its enlargement to Bilik, one of his commanders. The fortress lost importance and it was mainly used as a prison after the Mamelukes conquered Acre in 1291 thus ending the Crusader presence in the Holy Land.
The Mamelukes were unaware of the development of cannon warfare and firearms in the XVth century and they actually regarded the use of the latter as unfit for a Muslim warrior. This led to the end of their power in 1515-1517 when Ottoman Sultan Selim I defeated them repeatedly and eventually conquered Cairo. 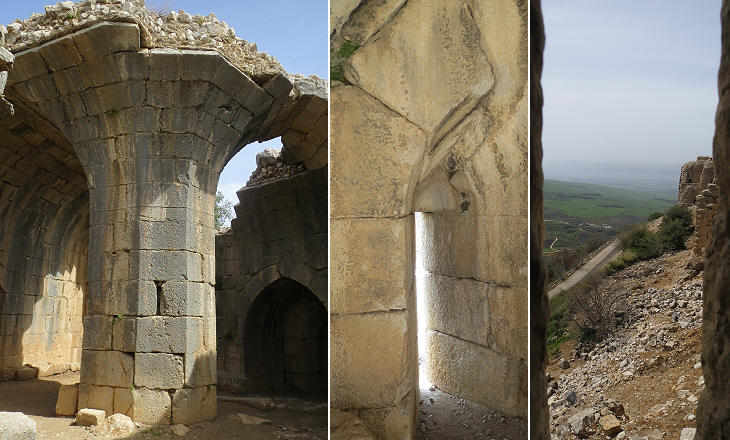 Round tower: (left) central octagonal pillar supporting the whole structure; (centre) slit designed to make more effective the shooting of arrows; (right) view from one of the side slits

At both the western corners runs a succession of dark strongly built low apartments, like cells, vaulted, and with small narrow loop holes, as if for musquetry. On this side also is a well more than twenty feet square, walled in, with a vaulted roof at least twenty-five feet high; the well was, even in this dry season, full of water: there are three others in the castle. There are many apartments and recesses in the castle, which could only be exactly described by a plan of the whole building. Burckhardt
The design of the round towers built by the Mamelukes to strengthen the fortress is of particular interest. They projected from the walls enough to have slits from which the archers could shoot their arrows from a side position (so-called "enfilade fire"). The structure of the towers was probably based on patterns the Mamelukes had seen in the Crusader fortresses. 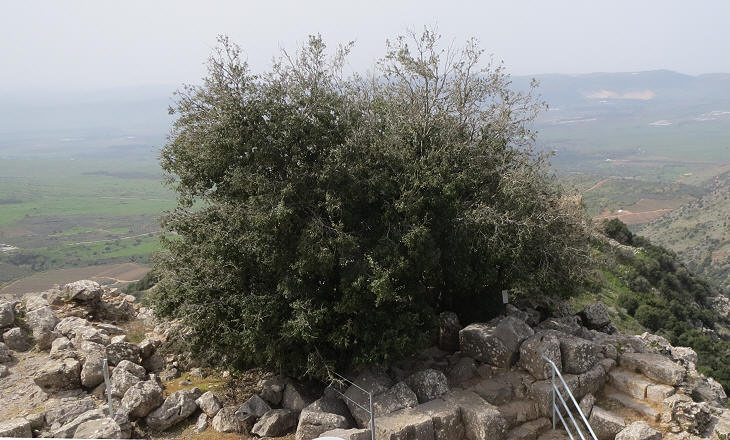 The destroyers of the fortress

We wondered how such a solid mass of masonry could be affected even by an earthquake, and could not understand what agency had made Banias a ruin; but we found the destroyer, after a while, and then our wonder was increased tenfold. Seeds had fallen in crevices in the vast walls; the seeds had sprouted; the tender, insignificant sprouts had hardened; they grew larger and larger, and by a steady, imperceptible pressure forced the great stones apart, and now are bringing sure destruction upon a giant work that has even mocked the earthquakes to scorn! Gnarled and twisted trees spring from the old walls every where, and beautify and overshadow the gray battlements with a wild luxuriance of foliage. M. Twain (he would have enjoyed seeing some temples of Angkor). Round tower of the keep

From the mountain's peak its broken turrets rise above the groves of ancient oaks and olives, and look wonderfully picturesque. From these old towers we looked down upon a broad, far-reaching green plain, glittering with the pools and rivulets which are the sources of the sacred river Jordan. It was a grateful vision, after so much desert. M. Twain.
The image used as background for this page shows a slit of a round tower.