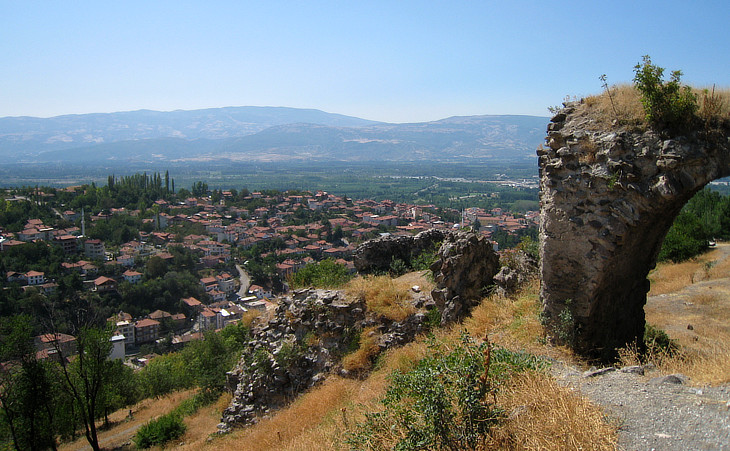 Niksar seen from the castle

Friday, August 5. (1835) We crossed the plain in a direction E. by S. towards Niksar, which appeared ahead of us at the foot of Mount Paryadres, the river flowing close to the road or trending away towards the centre of the plain on our right. (..) At a quarter after one we commenced a gentle ascent towards the town, built on the detritus brought down from the vale of Niksar into the plain. From the road on the north side of the town we overlooked the flat-roofed houses and gardens situated at the mouth of the valley.
William Hamilton - Researches in Asia Minor, Pontus and Armenia - 1842
Niksar is some 70 miles away from the Black Sea port of Unye and the range of mountains between the town and the sea is not very high. For this reason the valley of Niksar receives enough rain and the locals call it the Cukurova of Northern Anatolia, Cukurova being a very fertile region in South-Eastern Anatolia. 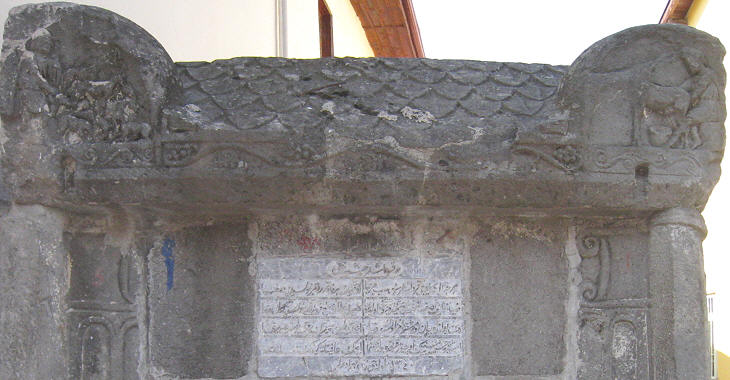 A broken sarcophagus near a fountain bore some traces of an inscription which I was unable to decipher. (..) At a neighbouring fountain was a bas-relief repre- senting a contest of animals, or rather two lions devouring a goat; and let into the wall close by were four stones with very rude sculptures, two of which represented animals, and two men, one of whom was apparently a blacksmith. Hamilton
During the Roman period Niksar was known as Neocesarea and a remnant of that name survives in its present one. Of its Roman past Niksar retains a sarcophagus which was turned into a fountain. According to Muslim religion the representation of human beings and animal is forbidden, but the reliefs placed at the corners of the lid were so close to the everyday life of farmers and shepherds that they were not erased. 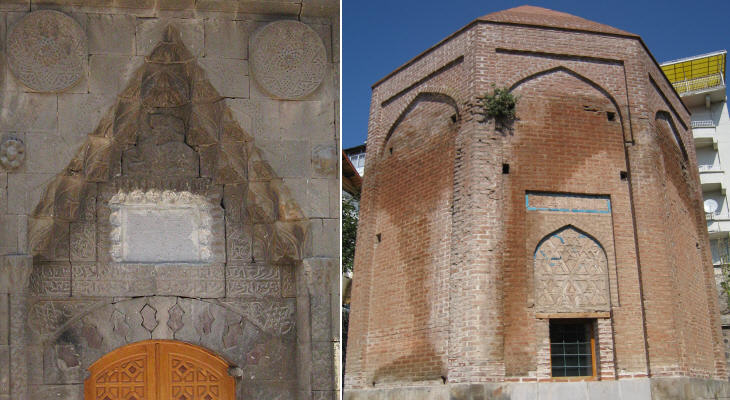 As we entered the town I saw several remains of ruined mosques and other edifices in the elaborate style of Persian or Saracenic architecture. Hamilton
Niksar was one of the main towns of the Danishmend Emirate which was established in the region after the 1071 Byzantine defeat at Manzikert. Towards the end of the XIIth century Niksar became a possession of the Seljuk Sultanate of Rum, based in Konya, the centre of the Mevlevi Order, known as the Whirling Dervishes. A tekke is a Dervish lodge and Coregi Buyuk Tekkesi was built in the early XIIIth century. Its portal follows the pattern of many other Seljuk buildings.
Kirk (forty) Kiz (young woman/virgin) Turbesi is a mausoleum built in 1220; it is not the only mausoleum of the region which makes reference to forty virgins. It is probably a legacy of the Christian devotion to the Forty Martyrs of Sebaste (today's Sivas), which was particularly strong in the region.

Ulu Camii is a strongly built mosque which goes back to the Danishmend period. Today it is located outside the centre of the town. Interesting Danishmend monuments can be seen at Amasya and Kayseri. 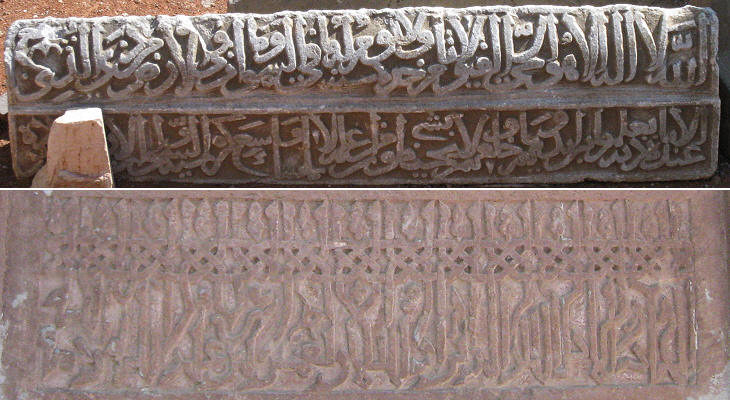 On the hill above Ulu Camii there are several tombs and funerary inscriptions (mainly of the Danishmend period) which are decorated with elaborate inscriptions. 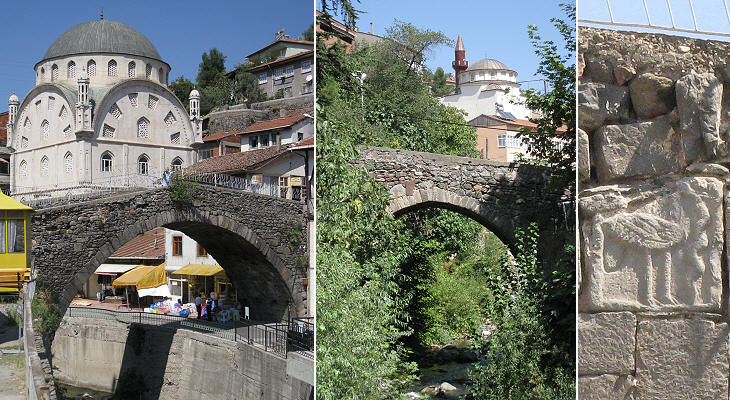 We descended into the plain of Niksar, and immediately crossed the Lycus by a lofty stone bridge without a parapet. The bridge itself was of Turkish or Byzantine origin, but constructed with the fragments of more ancient buildings. Hamilton
Niksar is some thirty miles north of Tokat, in the valley of the Kelkit River, the ancient Lycus, a tributary of the Yesilirmak (Green River). Two brooks cross the town before joining the main river in the valley. 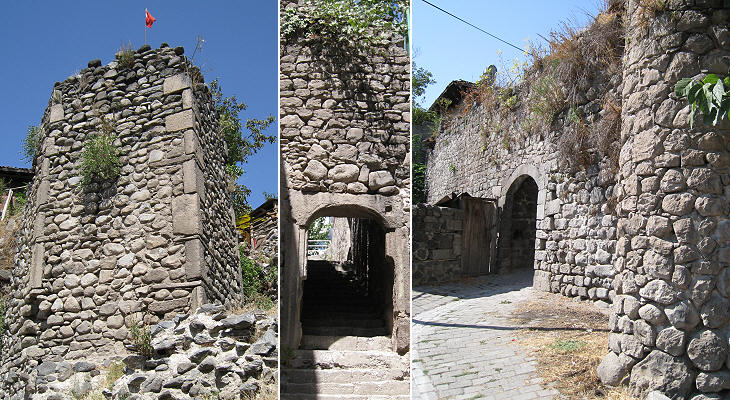 A tower and two gates of the walls

In the gateways of the outer and inner walls were many large blocks of stone which had evidently belonged to older buildings. Hamilton
Niksar was protected by walls of which several stretches with gates and towers have not been pulled down; this because the centre of the town is no longer inside the walls.

The castle, which is of considerable extent, stands on the brow of the hill to the north: it is a long end straggling mass, built at different periods, but in its present form is chiefly Turkish. (..) The castle was supplied with water by an aqueduct, part of which is still in use, the ruined portions being replaced by wooden pipes. Hamilton
The hill above Niksar was fortified; because its slope was not steep enough huge walls had to be built to effectively protect the garrison. After the Mongol invasion the town became part of minor emirates until the end of the XIVth century when it was conquered by the Ottomans. 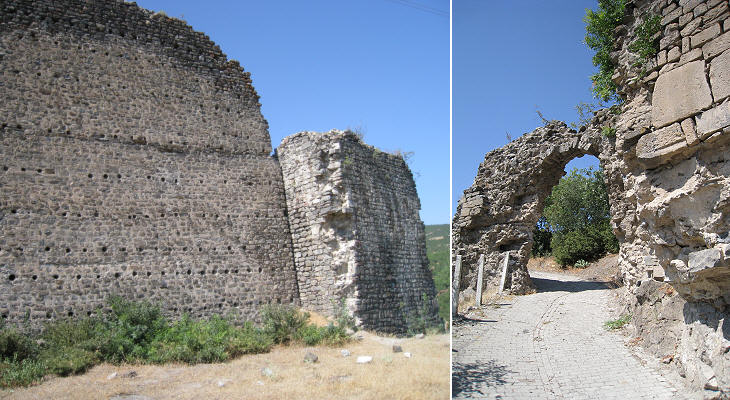 The large castle was used as a gathering point for the Ottoman armies; in particular in 1461 Sultan Mehmet II moved to the conquest of Trebizond from Niksar. 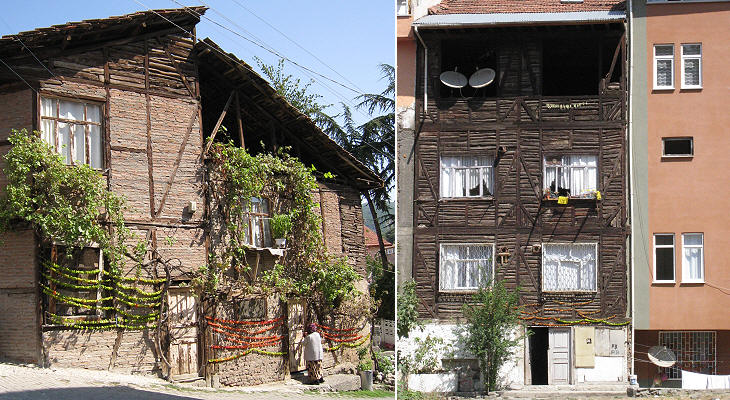 Green and red peppers on display on old Ottoman houses

The image used as background for this page is based on a "necklace" of green and red peppers which the inhabitants of Niksar place to dry out on the walls of their homes.