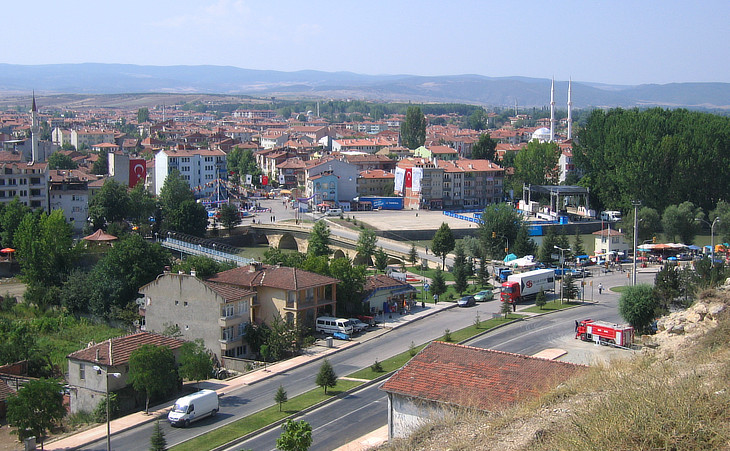 November 6th (1836) After a ride of seven miles along this vale, we came to a point where the river enters into a rocky ravine, and we at the same time crossed over some low hills, beyond which was the basin-like hollow in which stands town of Tash Kupri, in a most beautiful situation, surrounded by low wooded hills, and crowded with grove-embosomed villages.
William Francis Ainsworth - Travels and Researches in Asia Minor, Mesopotamia, Chaldea, and Armenia - 1842
Taskopru is a quiet town on the right (southern) bank of the Gok Irmak (Blue River).

We entered the town, which stands on the right bank of the river, by a bridge seventy-five yards long, and which formerly consisted of four arches, two of which now remain, but the two others, which were carried away, are replaced by three low and badly-constructed modern arches. Ainsworth
Taskopru was founded in the XIIIth century and it was named after the stone bridge built by the rulers of Kastamonu. 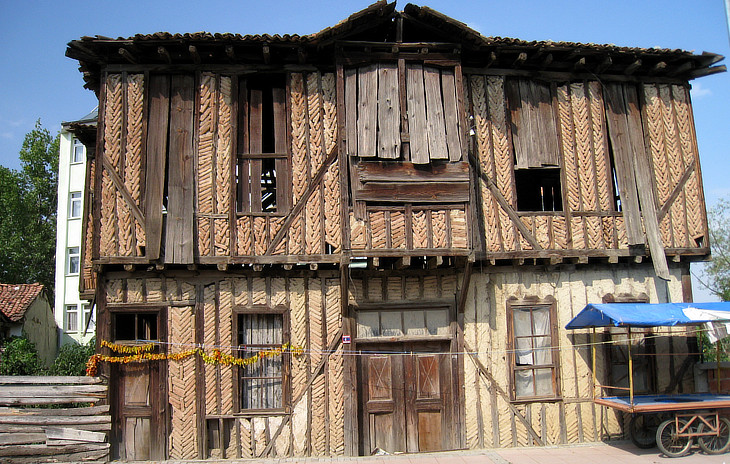 Great part of the houses of Constantinople are built with wooden frames, mostly filled up with unburnt brick, and a great number of houses are made only of such frames covered with boards.
Richard Pococke - A Description of the East and Some Other Countries - 1745
The modern town of Tash Kupri contains 1500 houses, all inhabited by Mohammedans. We counted ten minarets, two khans, and two public baths. Tanners and blacksmiths form a large portion of the community. Ainsworth
Taskopru does not have old mosques because in 1927 it was almost entirely destroyed by a fire caused by an earthquake. Today it supplies garlic to the whole country.

Pompeiopolis: the site of the excavations

Early next morning Mr. Russell and myself went to explore the antiquities of the town. We first visited a small building, used as a madreseh, or college, and which is one entire collection of hewn stones and remains of antiquity, put together in the form of a parallelogram, with an open space in the centre, and two rows of ancient pillars, no two of which had capitals of the same order. Near this building was a magnificent sarcophagus, of white marble, which was seven feet nine inches long, four feet wide, and three feet six inches high, and ornamented at the sides with exquisitely-wrought wreaths encircling a human face that was unfortunately mutilated. Sculptured bulls' heads also adorned the side, and rams' heads the corners, with bunches of grapes beneath (see a similar sarcophagus at Olba / Uzuncaburç). We copied several Greek inscriptions in various parts of the town, one from the gateway of the college, one from a fountain, and another in the interior of a tanner's house, near the bridge. One of these inscriptions was decisive as to the identity of Tash Kupri with the ancient Pompeiopolis: it ran as follows: "To Good Fortune; Caius Claudius Gallitianus, the son of Pallicus, the high administrator of the country, the senate and people of Pompeiopolis, the metropolis, have dedicated on account of his courage." Ainsworth 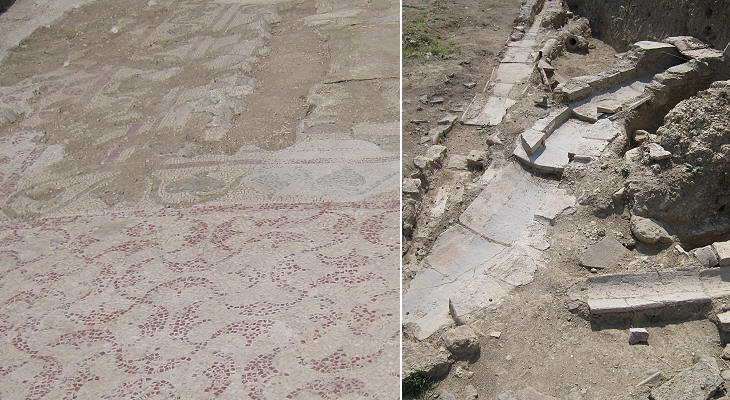 Taskopru is in a way the heir of Pompeiopolis, a town founded by Pompey in 65 or 64 BC on the left (northern) bank of the river. In 67 BC the Senate gave Pompey an imperium infinitum (extraordinary authority) for a period of three years to eradicate the pirates from the Mediterranean coast of today's Turkey. After having achieved this objective, Pompey waged war on Mithridates VI, King of Pontus, a long time enemy of Rome and defeated him. In order to consolidate Roman control over the conquered territories Pompey founded seven towns; his veterans were the first inhabitants.The memory of Pompeiopolis was lost until the French consul at Sinop discovered there an inscription mentioning Pompeiopolis, Paphlagoniae metropolis, Paphlagonia being an ancient name of the region. This occurred in the early XIXth century; in 1910 the site of Pompeiopolis was identified on a hill immediately north of Taskopru. Systematic excavations started in 2006 under the direction of PD Dr. Lâtife Summerer of the Institut fur Klassische Archaologie of the Ludwig-Maximilian University of Munchen.

Pompeiopolis: sections of a pavement (left) and of a mosaic (right) in the process of being entirely excavated

A visit to the archaeological site is very interesting because one can see the process of discovering the structure of the old town, or to be more precise of the "towns", as buildings of the Late Empire period cover the initial settlement. Turkey has archaeological sites which are known worldwide such as Pergamum, Ephesus and many others along the southern coast, but the Roman presence in north-western Anatolia has still to be fully investigated and the excavations at Pompeiopolis are expected to greatly contribute to unearth this historical aspect.

Kale Kapi: (left) the rock from a long distance; (right) the back of the rock

The environs of Taskopru, not only offer the chance to see the excavations of a Roman town, they also allow the discovery of a very ancient rock-cut tomb. Maybe discovery is not the right word, but this is the feeling one experiences when seeing Kale Kapi (Castle/Rock Gate) from a distance. 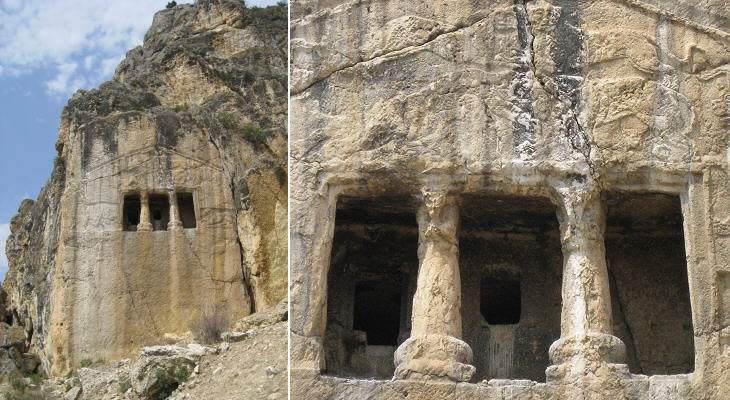 Kale Kapi: (left) overall view of the tomb; (right) reliefs above the cell

We know very little about the history of Paphlagonia before its conquest by Alexander the Great. It seems that owing to its mountains invaders were not interested in occupying it and that the region was ruled by a local dynasty. It had however contacts with the Greek and Persian civilizations and Kale Kapi clearly shows their influence.
The shape of the tomb is similar to a Greek temple and the relief above the cell portrays the fight between a man and a lion, a likely reference to Hercules. The pair of lions above the fight scene indicates that the tomb was that of a king.

Kale Kapi: mythological animals (a detail is shown in the image used as background for this page)

Two mythological animals stand at the sides of the central reliefs; that on the left is hardly visible, while that on the right is almost intact. It is difficult to trace back this animal to the Greek myth; its wings remind the viewer of a sphinx.

The tomb is decorated by three more animals; while bulls and lions can be seen in many works of art of antiquity, the unicorn is very rarely portrayed. Unicorns were not part of the Greek myth; they were thought to be actual animals living in India. The unicorn depicted at Kale Kapi has a heavy body which seems similar to that of a bull or of a boar.
You may wish to see rock-cut temple-like tombs at Myra and Kaunos, a gigantic Hittite relief at Ivriz or the rock-cut tombs of the Achaemenid (Persian) Emperors.

A little more than an hour's ride over hills, clad with juniper and prickly oak, brought us to a steep descent, leading to the small town of Boi'abad, between which and us was a rivulet, issuing from a rocky ravine, on the opposite side of which, and on a lofty and nearly isolated rock, were the remains of a rather extensive castle. (..) Boi'abad contains about 300 houses (..) which are rather scattered, and stretch up the valley which is occupied by luxuriant gardens, full of fine fruit- trees overrun by vines. The castle contains within its walls about thirty dwelling houses, which are said to have been deserted only about eight years ago. (..) When we visited this feudal castle there was not a human being within its walls, and the houses, still good, although built of wood, looked as if deserted only a few days before; the path was overgrown with viper's hugloss, and the whole had an almost painful aspect of sudden desolation. Ainsworth
The fortress of Boyabat, some thirty miles east of Taskopru, protected the entrance to the Gok Irmak valley.