The name of the town is a reference to Julius Caesar. At the time of Emperor Augustus the town of Mazaca/Eusebia was renamed Caesarea Cappadociae (in Latin), Kaysareia (in Greek) and soon after it became the capital of the Roman province of Cappadocia. 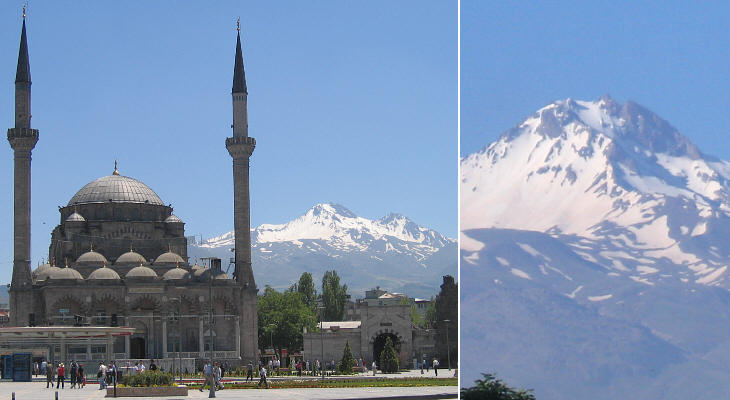 Wednesday July 19 (1836). After crossing the hot sandy plain, and passing close under some low hills on the right, we reached the burial-grounds of Caesarea at three, and presently entered its narrow and dirty streets. (..) I remained a week at Caesarea where (..) I made inquiries respecting the best mode of reaching the summit of Mount Argeus, which I at length learnt could only be attempted, with any chance of success, from a village on the southern flank, where I should find Armenian guides well acquainted with the mountain.
William Hamilton - Researches in Asia Minor, Pontus and Armenia - 1842
Kayseri is located at the northern foot of Mount Argaeus (today Erciyes), the highest mountain of Central Anatolia. According to the ancient geographer Strabo the view from its peak ranged from the Mediterranean Sea to the Black Sea; this is not true, but Mount Argaeus is a very imposing mountain which can be seen from a very great distance.
Burunguz Camii is a 1977 mosque which is an indication of both the wealth of today's Kayseri and of the strong religious feelings of its inhabitants. In addition it shows the reluctance of some modern Turkish architects to depart from traditional Ottoman patterns.

(May 1837) We descended upon the plain of Kaiseriyeh, passing, before we reached the town, a long peninsulated hill called Besh Teppeh (Five Hills), at the extremity of which is a ruined castellated building, and upon which is said to have been built a portion of the ancient town of Caesarea. (..) The central part of Kaiseriyeh is occupied by a castle with high walls and moat around it.
William F. Ainsworth - Travels and Researches in Asia Minor, Mesopotamia, Chaldea, and Armenia - 1842
Kayseri was one of the first important Byzantine towns to be conquered by Turkish tribes. This occurred in 1084. Later on it was included in the Sultanate of Rum. Its fortifications were strengthened by Sultan Alaeddin Kaykubad I in 1224. However this was not enough to avoid Kayseri falling to the Mongols in 1243.

(left) Lion at the entrance of the Citadel; (right) bastion of the city walls

The Armenians have preserved a written chronicle of the earthquake that ravaged the city of Kaiseriyeh in August, 1835, but it contains little of any interest to the philosophy of these destructive phenomena. (..) Many menarehs and lofty buildings were overthrown. Ainsworth
Sultan Alaeddin Kaykubad I placed two roughly cut stone lions at the sides of the main entrance to the citadel. The town was also protected by an enclosure of walls of which only a few stretches survive, also because of the effects of earthquakes. They vaguely resemble those of Diyarbakir.

The antiquities of Kaiseriyeh have not been yet fully explored, but as far as we could see were chiefly Mohammedan. Ainsworth
The Great Mosque of Kayseri was built in 1134-1143 when Kayseri was part of an emirate established by the Danishmend, a Turcoman dynasty who ruled parts of eastern/central Anatolia, including Amasya, Niksar and Tokat. The mosque is large, but rather low with a long portico where the faithful do their ablutions.

Kayseri is an important centre for the funerary architecture of the Seljuk period and of the two following centuries during which the city was often the capital of autonomous principalities. It houses a considerable number of kumbets (turbe - tombs - with a domed/pyramidal roof) some of which were built for a Hatun, the wife of a sultan or a governor. They seem to have been more decorated as compared to the kumbets for men; see also Hudavent Hatun Turbesi at Nigde.

The number of Mohammedan structures, including amams, kumbets, ziyarets, tekiyyehs, etc. is very great, and they also rise out of the plain on every side around the city. Ainsworth
Usually kumbets were built next to a mosque or inside a medrese, but in Kayseri there are many isolated kumbets in different parts of the city, occasionally at a significant distance from its centre. 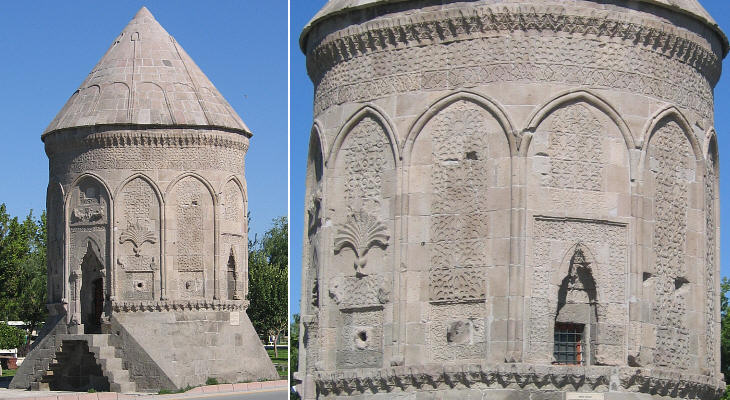 This almost unique circular kumbet was built in 1275 for Sah Cihan Hatun, a princess. It has twelve sides: each is finely carved. In addition to floral and geometric motifs some panels contain palms and animal figures. Also the conical roof has a light decoration based on twelve blind arches.

Move to page two or to:
Introductory page
Konya
Karaman
Mut and Alahan
On the Way to Nigde
Nigde
Cappadocia
Sivas
Divrigi