Tocat is a good fair City built at the foot of a very high Mountain, spreading it self round about a great Rock that stands almost in the midst of the Town, upon the top whereof a high Castle commands the neighbouring parts, with a good Garrison in it. (..) The City is very well inhabited with Turks, who are the Lord Controllers, Armenians, Greeks, and Jews.
Jean-Baptiste Tavernier - Travels through Turkey to Persia (in the 1630s-1650s)

A fair River runs about half a quarter of a League from the City, and is cross'd at Tocat over a very beautiful stone Bridge. Upon the North-side of the City, it waters a Plain three or four days Journey in extent, and two or three Leagues broad. Tavernier
July 11 th. (1837) We turned this day down the beautiful valley of the Yeshil Irmak (Green River), which, near Tokat, is full of gardens, and crowded with villages and country houses. The Yeshil Irmak, the ancient Iris, has its sources in the union of the Chamlu Bel and the Akloh Tagh, at the head of the valley of Tokat.
William Francis Ainsworth - Travels and Researches in Asia Minor, Mesopotamia, Chaldea, and Armenia - 1842 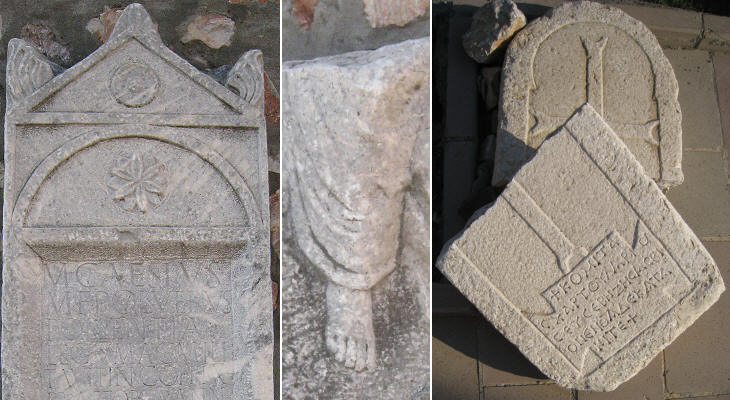 Tokat is very ancient, and the remainder of three others that stood there in former times. Tavernier
Tokat was in ancient times a place of much importance as a seat of worship, and known as the Commana Pontica, in contradistinction to the Commana Cappadocia, both, according to Strabo, being consecrated to the same goddess Bellona. (..) Cicero notices the place as "fani locupletissimi et religiosissimi." Ainsworth
Tokat is the heir of Comana Pontica, an ancient town situated on the left bank of the Yesilirmak, which was known for a large temple dedicated to a moon-goddess. After the Byzantine defeat at Manzikert in 1071, the region was invaded by Turkish tribes; at that time Comana was most likely a very minor settlement and the invaders decided to found a new town. They chose a site at the foot of a rocky hill which was situated a few miles south of the river. Tokat, the new town, underwent rapid development and a large bridge was built across the Yesilirmak to facilitate access to it. For this reason Tokat does not retain ancient monuments: a small museum displays inscriptions and reliefs of that period which were found in the province.

(August 1835) We soon came in sight of the ruined castle picturesquely situated on a steep ridge of limestone rocks to the west; after which the whole town bursts upon the sight at once.
William Hamilton - Researches in Asia Minor, Pontus and Armenia - 1842
The history of Tokat is similar to that of Amasya: at first it belonged to the Danishmend Emirate and after 1192 to the Seljuk Sultans of Konya. During the XIIIth century it became part of a Mongol Ilkhanate, although formally subject to the Sultans of Konya. Finally it was conquered by (Ottoman) Sultan Beyazit I towards the end of the XIVth century.
Current fortifications which link the two peaks of the hill date from the Ottoman period. 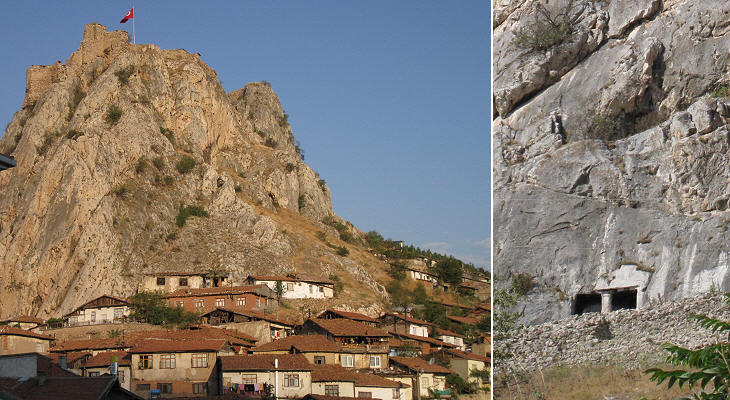 I reached the northern rock, which is crowned with the ruins of a castle of the Lower Empire. Its steep and craggy pinnacles, surmounted with fragments of ruined battlements and turrets, produced a picturesque effect; and on the southern scarp were several natural and artificial caverns, some of which may have been sepulchral. Half-way up the rock I found one of those remarkable flights of steps, penetrating into the centre of the mountain, like those at Unieh Kaleh, but so broken up that it was impossible to descend without ropes and a light. Hamilton
Modern Tokat has developed along a south-north axis along the road leading to the bridge; in the past most of its houses were grouped around the fortress.

The centre of the old town

Tocat is one of the most remarkable Thoroughfares in the East, where are continually lodg'd the Caravans from Persia, Diarbequer, Bagdat, Constantinople, Smyrna, Synopsis, and other places, and here the Caravans turn off, as they are variously bound. Tavernier
Tocat contains several fine old khans, substantial buildings of burnt brick and stone, but those of later date are, like most of the houses, built of mud. Hamilton
During the Mongol protectorate Tokat flourished as a trading city and a pilgrimage centre. The main street of the old town ran along the southern edge of the fortress; it had a variety of markets; there were many caravanserai which were neglected for a long period and have been recently restored/reconstructed. The buildings shown above belong to the Ottoman period. 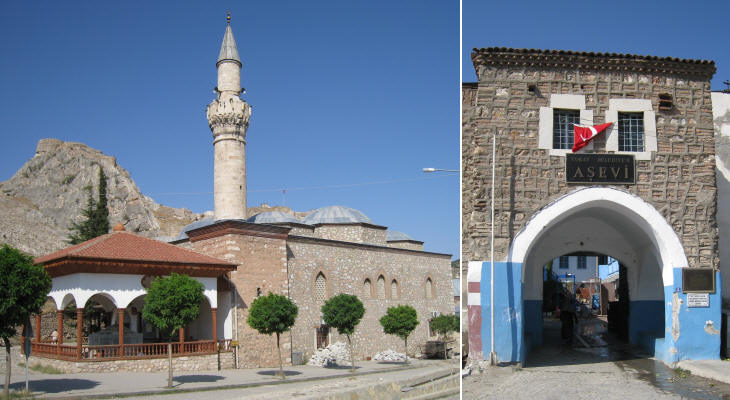 The Soil is very fertil, and replenish'd with fair Villages very well peopl'd. A man may live very cheap at Tocat the Wine is most excellent, and all sort of rare Fruit very plentiful. It is the only place in all Asia where plenty of Saffron grows, which is the best Commodity you can carry to the Indies. Tavernier
The bazaars, with the exception of the Bezestan, which is a solid stone-built edifice are mean and ill supplied. Hamilton
The sweet valley of Tokat, manifested itself at this season of the year in a striking manner by the natural productions. Cherries were already gone by, while apricots, plums, French beans, common beans, and spinach were in season. Ainsworth
Takyeciler Camii was built in the XVIth century next to a bedesten. The mosque has been almost entirely reconstructed while the bedesten required minor restoration. 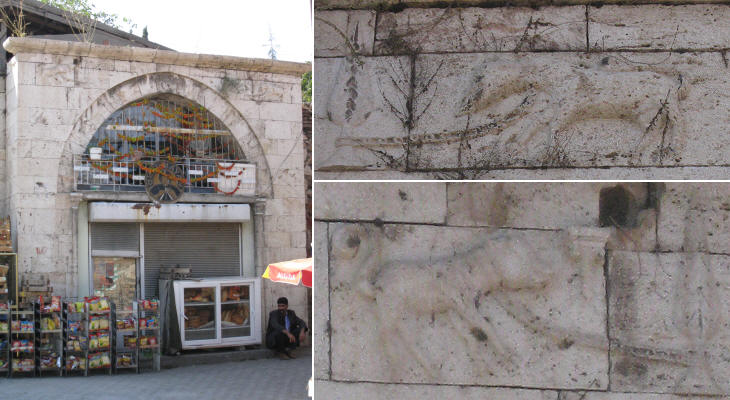 Aslanli or Pacha Hani and details of its reliefs

When you set out either way out of Tocat, there is a Toll-gatherer, that counts all the Camels and Horses that pass by, and exacts for every Camel a quarter of a Rixdollar, and for every Horse half as much. As for the Horses or Camels that carry the Passengers or their Provisions, they pay nothing. This continual concourse of the Caravans trolls the Money about at Tocat, and makes it one of the most considerable Cities of Turkie. Tavernier
A grocery is housed in the entrance to a caravanserai built in 1752; the portal is decorated with two peculiar reliefs portraying an animal which is chained to a cypress. The locals call it Aslanli (Lions') Hani. Similar reliefs can be seen in Syria and Lebanon. 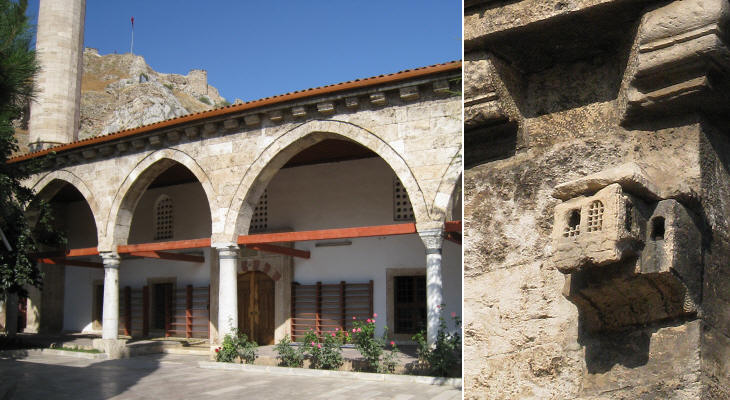 Ulu Cami and holes for nesting birds (as at Kastamonu)

There are 15 mosques, one of which, called the Eski (Old) Djami, is a neat building in the Saracenic style, and very old. The mosque itself is circular, with two small wings, and a large portico built of marbles of various colours. Hamilton
Ulu Cami (Great Mosque) was built by the Danishmend in the XIIth century, but it was modified in 1678. It has some ancient columns and a sort of small cage for birds to nest inside it. 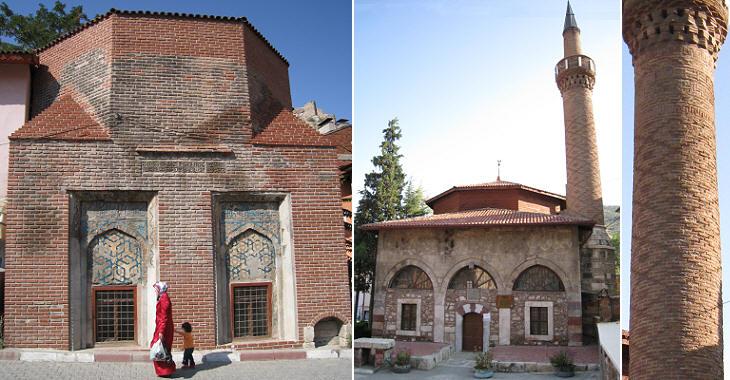 Ebulkasim bin Ali Tusi was a governor of Tokat during the Seljuk period; his kumbet (tomb with a pyramidal roof) is decorated with blue tiles.
Mescid means small mosque: Alaca Mescid was built in 1301 when Tokat was part of a Mongol Ilkhanate; Hamza Bey Camii was built in 1411 during the Ottoman Interregnum, when three sons of Sultan Beyazit I fought each other. 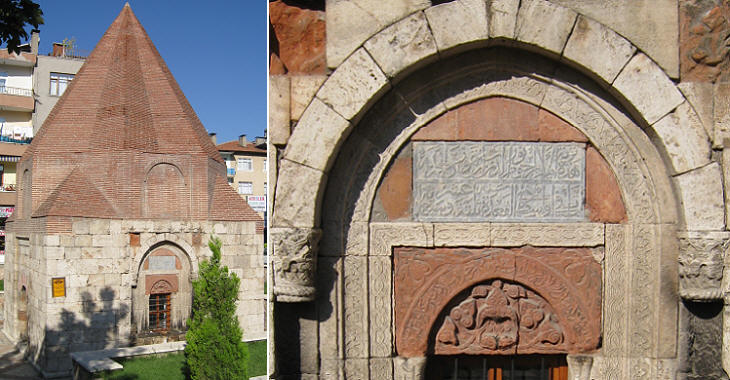 The finest tomb of Tokat belongs to the Ilkhanate period: it was built in 1314 at a distance from the town, along the road leading to the bridge. The image used as background for this page shows an inscription of this monument. You may wish to see the Mausoleum of Ilkhan Sultan Oljeitu at Soltaniyeh.