November 2nd (1836). We continued our route over woodless hills, crossing two different ranges, with their intervening valleys, when we came to a low, wooded crest, with a ravine, where was a guard-house, and a little beyond this the valley of the Gok Irmak (Blue River) burst upon our view, stretching far away beneath our feet, dotted with villages and plantations, and backed by the city of Kastamuni, over which towered the patrimonial castle of the Comneni. From Zafaran Boli to this place, except in the low valley of the Daurikhan river, our elevation had never been much less than 2000 feet above the sea.
William Francis Ainsworth - Travels and Researches in Asia Minor, Mesopotamia, Chaldea, and Armenia - 1842

View of the fortress and of Yakup Aga Camii

Kastamuni is situated in a valley, from one-half to three-fourths of a mile in width, and this it completely fills up; a break in the hills that bound the city to the west gives origin to another valley, which is filled up by the suburb, called Hisar Ardi, while upon the rocky cliff which separates the two valleys, stand the ruins of the castle. The present name of the town is a corruption of Castra Comneni, of which family this place was a patrimonial estate, if not an independent kingdom, before it attained the power and eminence which arrested for awhile the fate of a sinking empire. Ainsworth
The large fortress which overlooks Kastamonu is a symbol of its long history which was particularly troubled between the XIth and the XVth centuries. The fortress is thought to have been built by Isaac I Comnenus (or Komnenos), Byzantine Emperor in 1057-1059, while he was serving as commander of the field army in Anatolia (between 1042 and 1057). The fortress was called Castra Komnenon. At that time the fortress was not meant to protect the Byzantine Empire from an external threat, but rather to strengthen the power of Isaac Comnenus. He was the founder of a dynasty which ruled the empire for over a century.

The castle of Kastamuni is a rude structure, built of the same coarse sandstone as the rock on which it stands. The mortar is a mixture of lime and pebbles. Some of the towers, three of which are round, are nearly fifty feet in height: one is partly built of tiles, and some square ones, more especially such as flank the outer wall, are of better construction than the rest, and formed of large stones; they probably belong to a more remote era. A plan was made, from which it appears that the castle is of an oblong form, 414 feet long by 60 wide. Ainsworth
In 1071 the Byzantines suffered a great defeat at Manzikert in Eastern Anatolia; this event, coupled with dynastic quarrels at the court, led to the loss of most of Anatolia to the Seljuks, Turkish-speaking military-organized tribes. Kastamonu became part of a large principality ruled by the Danishmends, who were based in Amasya and Kayseri.
In 1132 Emperor John II Comnenus restored the Byzantines in Kastamonu, but for just one year because the town fell again into the hands of the Danishmends. 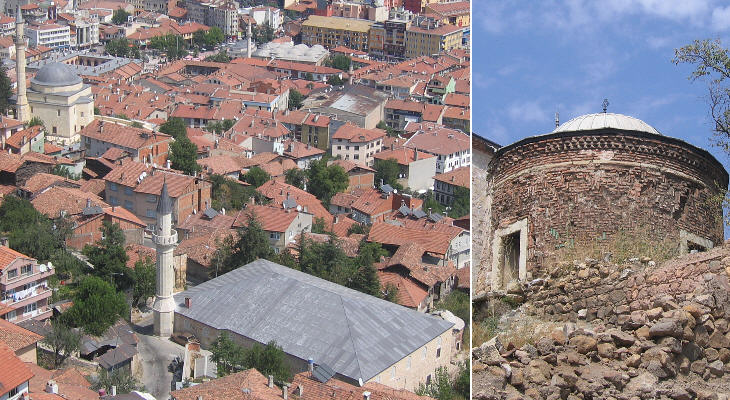 The total number of houses is said to amount to 12,000, giving a population of 48,000 persons. The Greeks have out of this only 160 houses, and the Armenians 20. The former have a small church, dedicated to St. John the Baptist. The Armenians meet for prayers in a khan. In the Mohammedan city we counted thirty-six minarets, and there are twenty-four public baths. There are also in the city four monasteries of resident or stationary, and two of itinerant, dervishes. Ainsworth
The inhabitants of Old Kastamonu lived on the flank of the hill which was protected by the fortress; Atabey Camii was built in 1273 immediately below the main tower of the fortress. It was meant to be used as Ulu Camii, the great mosque where all male adults gathered for the Friday prayer. Its large roof is supported by many wooden columns. Adjacent to it there is a small circular turbe (mausoleum) with an elaborate brick decoration which retains traces of blue tiles. The view from the fortress also shows two later Ottoman mosques covered by a large dome (Yakup Aga Camii) and by a series of small domes (Nasrullah Camii). 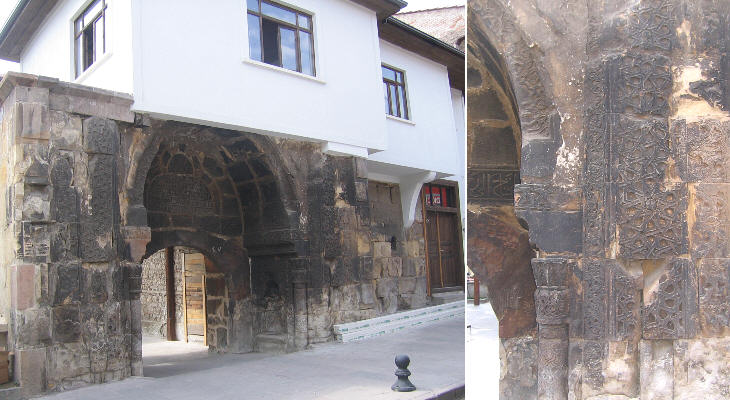 Yilanli (of the Snake) Darussifasi: Seljuk entrance and detail of its decoration

It became, at the fall of the Comneni, the residence of an independent race of Turkoman princes. (..) Although the commerce of Kastamuni is inconsiderable, its population and extent claim for it some attention. (..) Kastamuni is not unfrequently visited by the plague, and is always liable to bad fevers, more particularly malaria, which is said often to assume a very fatal type. Ainsworth
A kulliye (complex of buildings) which included a large darussifa (hospital) was built in the same period as Atabey Camii. It has been largely modified but it still retains an original portal decorated with light and elaborate reliefs, a typical feature of Seljuk architecture.

Ibni Neccar Camii: (left) detail of the wooden door; (centre) relief on the back wall of the mosque; (right) holes for birds to nest inside (they can be seen also at Tokat)

In 1292 Kastamonu became closely linked to the first appearance of the Ottomans in history. Temur Yaman Candar was the commander of the palace guards of the Seljuk Sultan Murad II: he became involved in a dynastic quarrel and by siding with the winning contender he was rewarded with Kastamonu and its environs. This led to the foundation of an autonomous principality; the dynasty was named Candarogullari after its founder.
The governor of Kastamonu had the responsibility to control the border between the Seljuk territories and the Byzantine Empire in north-western Anatolia. The Candarogullari however preferred to cooperate with the Byzantines and they even sided with them against other Seljuk/Mongol principalities. For this reason the Seljuk Sultan entrusted the control of his territories bordering on the Byzantine ones to Osman Bey, the founder of the Ottoman dynasty.
Ibni Neccar Camii was built in 1353 and it is the oldest mosque of Kastamonu which belongs to the Candarogullari period. It was damaged by an earthquake in 1943. The mosque is famous for its wooden door panels, which are carved with floral motifs shaped into discs and teardrops. They are now replaced by good copies. The outer qibla wall which indicates the direction of Mecca is decorated with a relief and there are small niches for birds to nest inside. 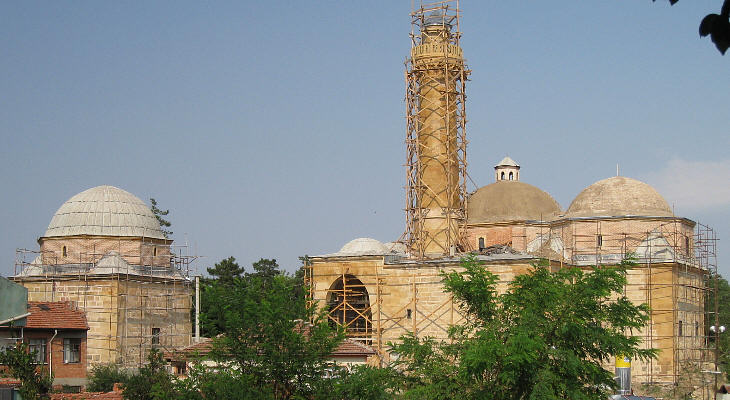 Sinope and the adjacent country being reduced by Mohammed II., conqueror of Constantinople, the whole of the principality fell into the hands of the Osmanlis; and in the time of Murad III. (a.d. 1585), we find his vizir, Osman, wintering his forces at the castle and town of Kastamuni. Ainsworth
Overall relations between the Candarogullari and the Ottomans were good and they were strengthened by the establishment of family bonds. In 1380 as a result of a dynastic quarrel the principality was split into two branches: one was based in Kastamonu and the other in Sinop. A few years later the Kastamonu branch ran into a confrontation with (Ottoman) Sultan Beyazid, who conquered the town. In 1402 Beyazid was defeated at Ankara by Timur, who gave Kastamonu to the Candarogullari of Sinop.
In the XVth century the Ottoman Sultan was again recognized as the overall master of the principality, which however continued to be ruled by the Candarogullari. This situation lasted until 1461 when Sultan Mehmet II, after having conquered Constantinople, decided to annex to his empire many small principalities in Anatolia, including Kastamonu and the Empire of Trebizond.
Ismail Bey was the last Candarogullari ruler. He built a large kulliye on a mound along the river: it included a mosque, a caravanserai, a medrese, an imaret and his own mausoleum. The design of the complex shows the influence of Ottoman architecture. Ismail Bey was not buried in the mausoleum he built. Mehmed II exiled him to Filibe (Philippopolis, today's Plovdiv) in Bulgaria, where he died shortly thereafter. 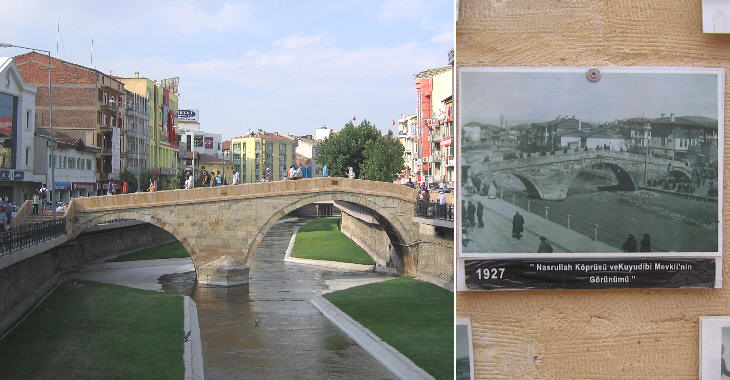 The centre of the town, washed by the river of Kastamuni, is but a deep kennel, into which the filth of the whole place is collected. There are no open quays to enliven the scene, and only here and there a wooden bridge, across which the Mohammedan has to pick his way, lest he should wake the sleeping dogs, and be defiled by touching them. Ainsworth
Kastamonu is situated near a small stream which by joining with other small rivers forms the Gok Irmak (Blue River - ancient name: Amnias). A traditional 1506 Ottoman bridge was among the landmarks of the town. Unfortunately due to the enlargement of the streets along the river it has been brutally shortened. 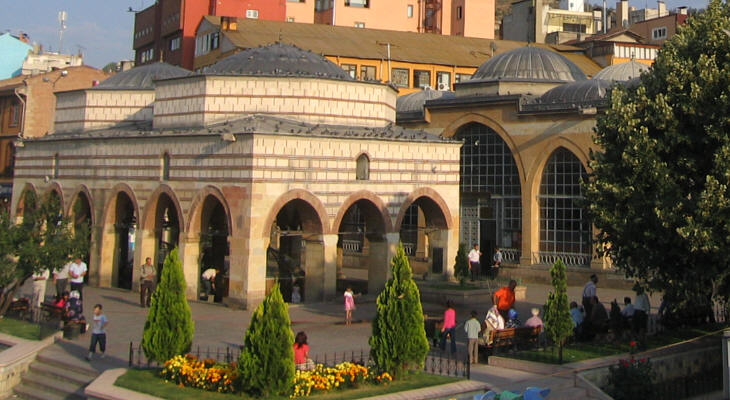 Nasrullah Camii and its double sadirvan (large fountain for ablutions)

We arrived, early in the afternoon, at the crowded and bustling city of Kastamuni. (..) Rassam had to go on first, and as we were to follow, we missed him, and had to wander about the town nearly two hours, till, directed by some Christians in the market-place, we luckily found him in the Greek quarter, where he had secured a comfortable apartment in the house of a member of that persuasion. During our stay, besides our observations astronomical and magnetic, we explored the city. Ainsworth
This mosque was built by Nasrullah Kadi (Judge Nasrullah) during the reign of Ottoman Sultan Beyazid II at the same time as the Nasrullah bridge. The mosque was enlarged in 1746 and a few years later the two fountains which served for ritual ablutions were covered with two nice domes which rest on eighteen pillars. 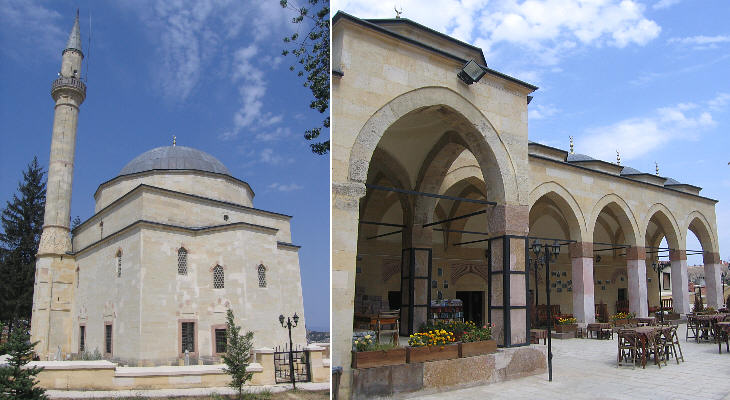 Yakup Aga Kulliye was built in 1547 and it is the best example of Ottoman architecture in Kastamonu; the mosque, thanks to its position on high ground, is a key element of the town's landscape. The ancillary elements of the complex were recently restored after they had been abandoned for some time. 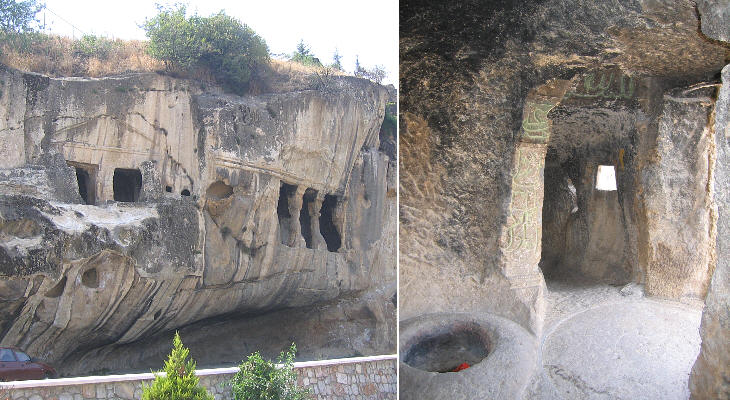 Many locations of south-western Turkey (such as Kaunos and Myra) are renowned for their rock-cut tombs. This kind of funerary monuments can be found also in Paphlagonia (the historical region to which Kastamonu belongs). An impressive tomb is located in a remote area between Kastamonu and Taskopru. Near the town there are two such tombs: from the exterior they have the appearance of a Greek temple, while inside they are not limited to a cell, but have rooms, passages and storage facilities. For this reason they have been called Ev Kaya (stone house). Another very impressive rock-cut tomb can be seen north-west of Taskopru.

The image in the background of this page shows a relief on a well at Ismail Bey Medresesi.