You may wish to see an introductory page first.
May 22. (1835) On coming on deck this morning, as we were passing within two miles of Cape Lepte, a low, black, volcanic-looking coast, we saw the town of Sinope with its remarkable promontory about ten miles a-head of us. It is situated on the low and narrow isthmus which connects the promontory with the main, and is surrounded by a wall fortified with turrets at short distances from each other. A rich and well-wooded country appeared to extend to the south from the town.
William Hamilton - Researches in Asia Minor, Pontus and Armenia - 1842 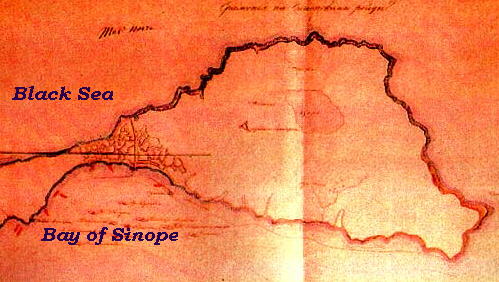 It was with feelings of the greatest satisfaction that I at length found myself within the walls of this celebrated city, once the capital of the kingdom of Mithridates Eupator, by whom it was much embellished, and who also formed a harbour on each side of the narrow isthmus; a city no lees illustrious in its origin, than in its defence against hostile attacks, and in its final fall; and remarkable as the birth-place of the cynic philosopher Diogenes. Its modern name is Sinab; but nothing remains standing of its once celebrated buildings, its magnificent halls, and the beautiful temples, with which it was embellished by successive princes and rulers; the few traces of its former magnificence, I subsequently found in rambling about the town and neighbourhood during the three days I remained there. Hamilton
Sinope (today Sinop) owed its development since the most ancient times to its position at the most northern point of the Anatolian coast which facilitated the crossing of the Black Sea to reach the Crimean peninsula. The town lies on a narrow isthmus linking the mainland to a peninsula, which protects the resulting bay from the strong northern winds. A high range of coastal mountains made it rather difficult to reach Sinope from the Anatolian plateau and these same mountains aided in protecting the town from attacks. Sinope was in turn a prosperous Greek colony, one of the main centres of the Kingdom of Pontus and a rich Roman town (Iulia Felix). During this period it was fortified by walls having the shape of an almost regular rectangle. 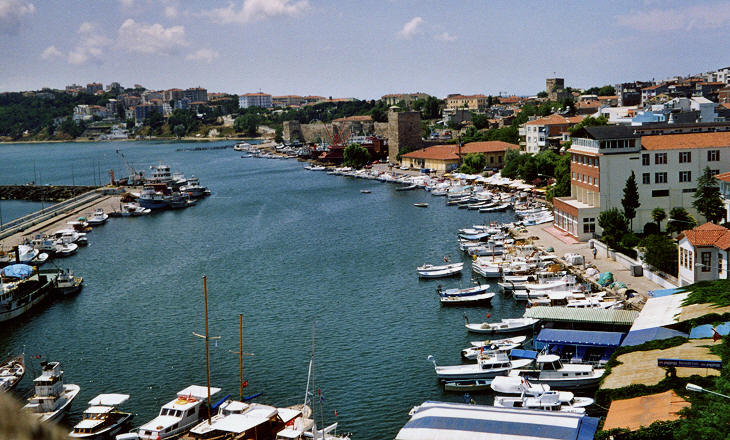 View of the harbour of Sinope from the eastern bastion

With the fall of the Byzantine Empire in Constantinople in 1204 the possession of Sinope was contended between the Byzantine Empire of Trebizond and the Seljuks who ruled most of central Anatolia. The Genoese merchants who had settled in Sinope opposed the Byzantines, as they were in competition with them for control of the Black Sea trade. Eventually, the Seljuk Emirs of Kastamonu, prevailed and the Genoese merchants in Sinope were granted facilities and tax exemptions. 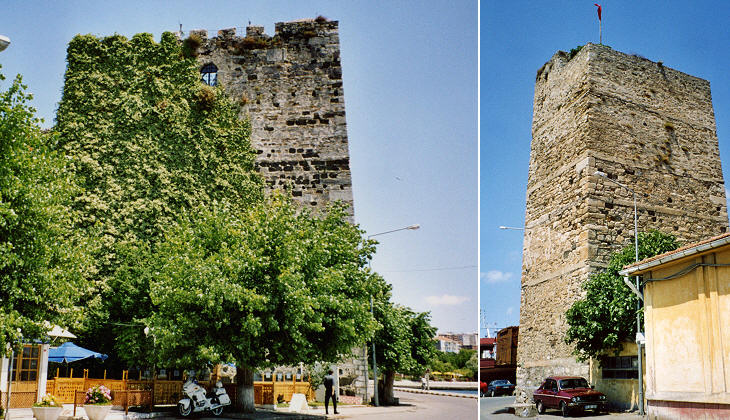 The second or outer wall, which extends across the isthmus, is built of old materials, and is probably the work of Byzantines or Genoese. Hamilton
Although Sinope does not show evidence of direct Genoese rule it is thought that the two high towers protecting the harbour were strengthened by them. 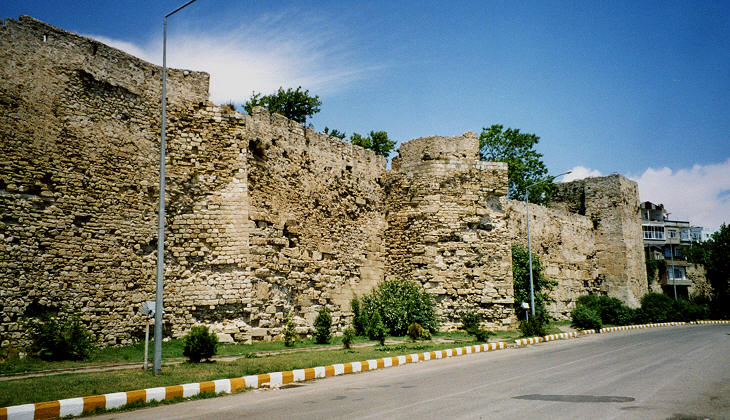 A well preserved section of the walls near the harbour

The narrow isthmus was covered with fine sand blown up by the prevailing north-west winds. On this side Sinope is defended by a strong wall, apparently Byzantine, which stretches across from N.W, to S.E., and which is strengthened by several towers, some of which have swerved considerably from the perpendicular. Hamilton
The walls of Sinope were built by the Romans and subsequently restored and modified by the Byzantines and the Seljuks. They have towers of different shape and orientation to provide a more effective defense. 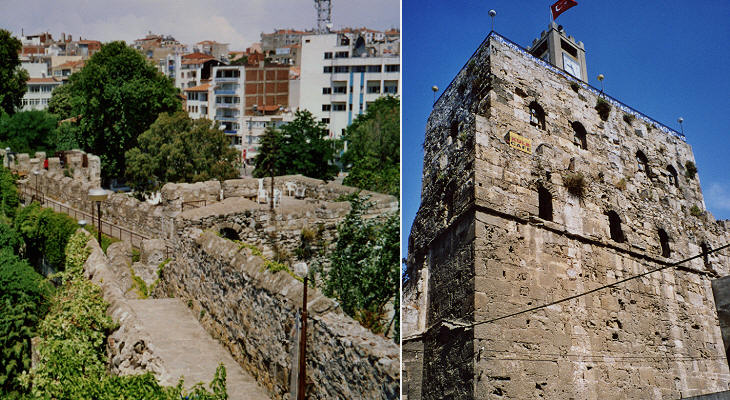 Eastern walls and their main tower

The towers have narrow oblong windows or loophole and the construction is very perfect; and I have no doubt that they are part of the old Roman wall. Hamilton
It is possible to walk on the ramparts of the eastern walls which are interrupted by a tower showing different layers of fortifications. 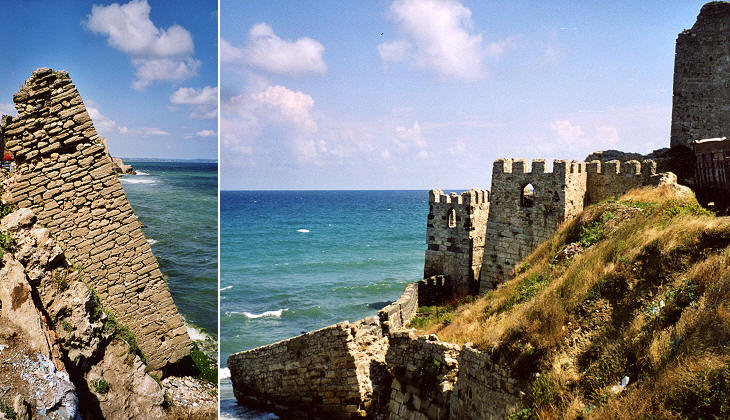 Being raised upon sand, some of the towers have fallen from the perpendicular, and still present a grotesque appearance, more recent fortifications having been built upon them. Hamilton
The walls protecting Sinope from attacks coming from the Black Sea were built right on the edge of the coastline, which as the Black Sea has no noticeable tides, is very precisely defined. 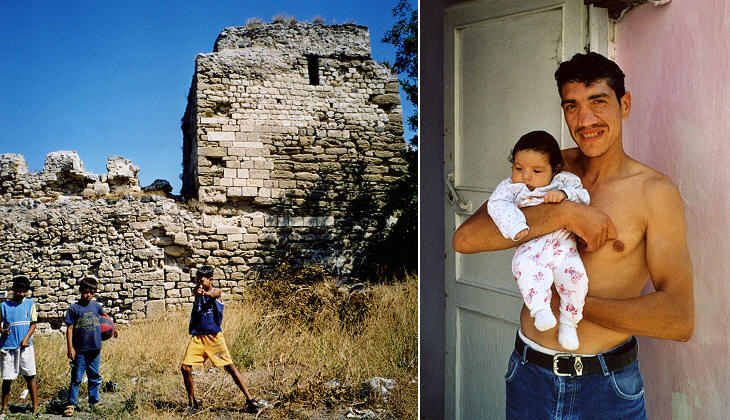 The population and prosperity of Sinope are not such as might be expected in a place affording such a safe harbour between Constantinople and Trebizond. I observed also a general appearance of poverty and privation throughout the peninsula. Hamilton
While the area of the harbour is full of cafès and restaurants, the streets next to the maritime walls are rather grim and the people who live there are not accustomed to seeing people taking pictures. They often volunteered to be photographed and I felt I had to show I was not interested only in crumbling stones, but in human beings too. 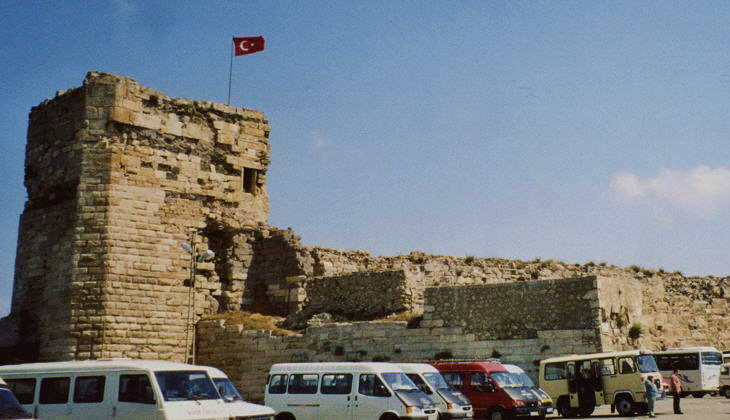 Fortifications at the entrance of Sinope

The Seljuks strengthened the fortifications protecting Sinope from an attack by land, by building an imposing fortress, which later on was turned into a prison. 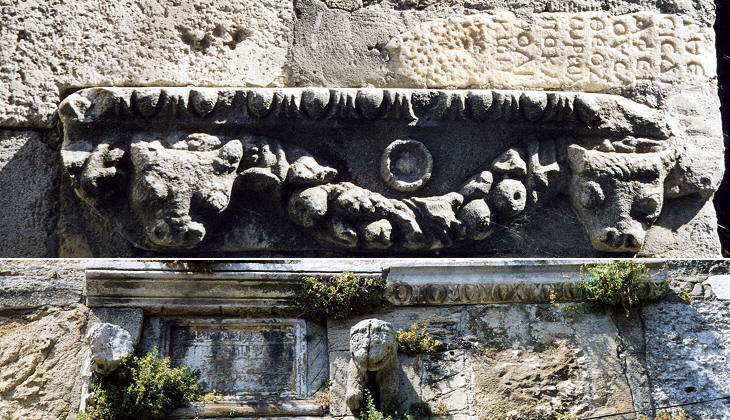 Near the eastern gate the whole of the wall across the isthmus on this side has been built up with fragments of ancient architecture, such as columns, architraves, etc., and I promised myself a rich harvest of inscriptions; (..) and the outer wall to the west is also formed of similar remains; amongst them were pieces of cornice. Hamilton
The walls of the fortress were embellished here and there with fragments of Roman buildings, one of which is used as background image for this page. 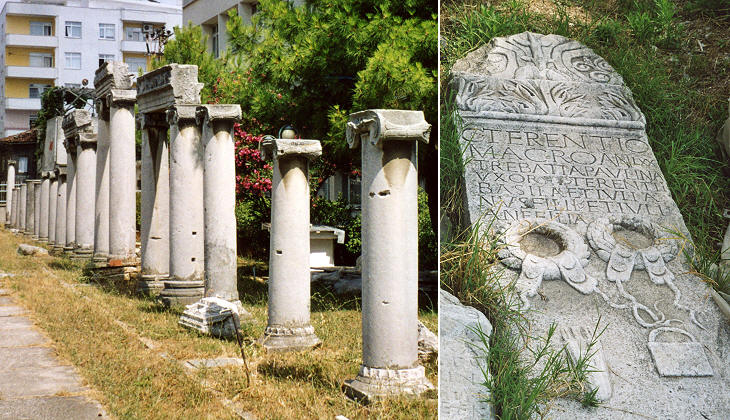 The same profusion of ancient fragments existed in the courtyard of a mosque near the centre of the town, where they were arranged on each side of the different paths and avenues leading to a large fountain. In many of the principal streets fragments of architraves and columns are seen in the foundations of the houses. Hamilton
The Museum of Sinope provides ample evidence of the wealth of the town during the Roman period. In its garden there are many columns and funerary inscriptions of that period, some of which were found in nearby locations. 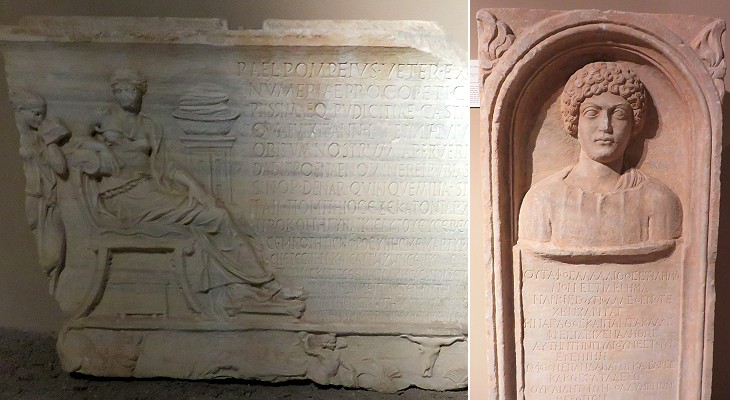 Archaeological Museum of Istanbul: Roman gravestones found at Sinop; that on the left has an inscription in both Latin and Greek

Prior to the foundation of the local museum the most interesting archaeological findings were sent to the Archaeologogical Museum of Istanbul. 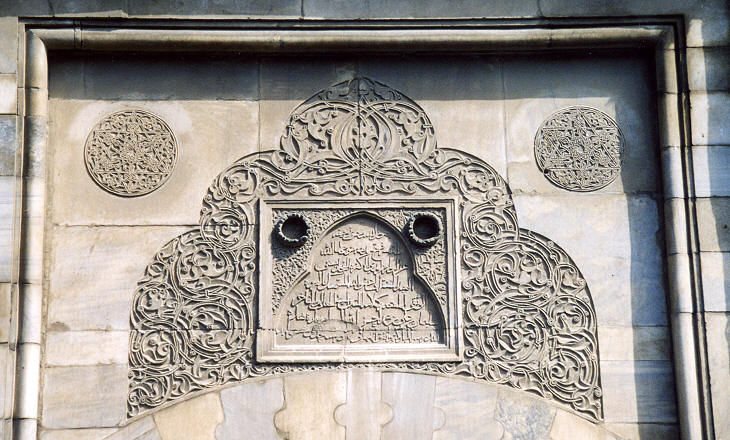 Detail of the mederse portal

Sinope has also some interesting evidence of Seljuk architecture. The image above shows the fine decoration of the entrance of a XIIIth century religious school (mederse).