We found a small village called Chaye Keuy, which was built in part upon a mound of ruins, and there were also many large hewn stones, which make it likely that this was formerly a station of the great Roman road. (..) At Golmekchi-ler we also found many fragments of large hewn stones and marble columns, and our road continued over what was evidently the remains of an ancient causeway. (..) The great road, the indication of which is thus preserved, by means of stations or villages, and of gateways and guard-houses, extended from Tium by Claudianopolis, in the valley of the Parthenius, as far as to Ancyra; and the details of this road have been preserved in the Antonine Itinerary. It is curious that this great road lies through what has been hitherto a very unfrequented and quite misunderstood part of the Asiatic peninsula, but which presents great advantages to the movements of an army in its natural facilities, its population and fertility.
William Francis Ainsworth - Travels and Researches in Asia Minor, Mesopotamia, Chaldea, and Armenia - 1842 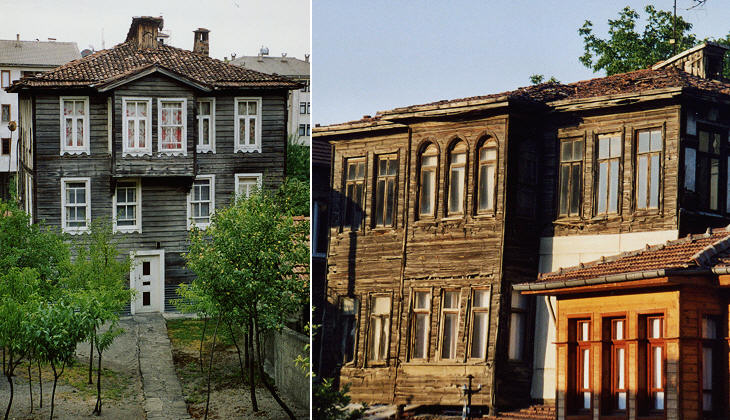 Timber houses in Bardin; you may wish to see those at nearby Safranbolu

The next day we continued our journey over a similar country, low, hilly, and wooded, for about nine miles, when we came to the crest of some chalk hills, from the summit of which, the valley of the Parthenius, and the town of Bartan, burst upon our view in inviting beauty. (..) The town of Bartan, which is the ancient Claudianopolis, has 650 houses. (..) The houses, on account of the marshy character of the surrounding country, are all built of two stories, the upper one alone of which is inhabited. For the same reason the town is carefully paved with large limestone slabs, better so than any Turkish town I have seen. Ainsworth
During the Roman period the timber of the woods around Bardin was shipped through the port of Amastri. Emperor Claudius built a road between the towns. 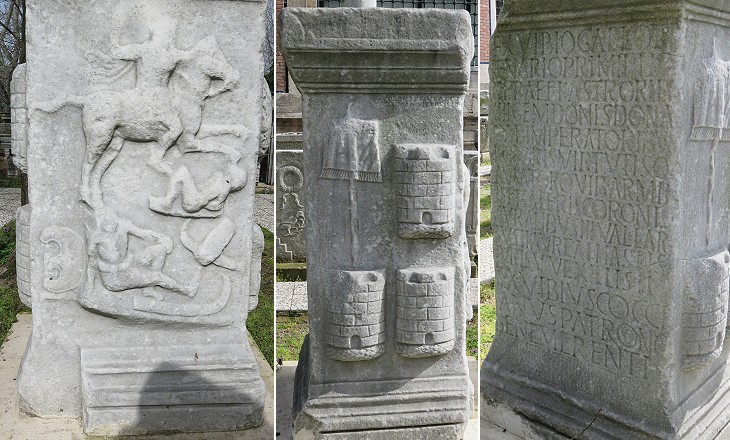 Archaeological Museum of Istanbul: base of a statue in honour of Sextus Vibius Gallus, a Roman military commander (IInd century AD), which was found at Amastri

After staying a day at Bartan, we hired horses to take us to Amaserah, a distance of twelve miles, and back again the same day. (..) We now began to ascend wooded hills, and continued along these till we came within view of the sea, when we turned to the east, by a steep descent, with steps hewn out of the solid rock. This is the only approach to Amaserah from the land side, and a remarkably difficult one, and it would have required little sagacity in a country where public spirit in the way of internal improvement is so exceedingly rare as in Turkey, to determine that this road hewn out of the rock, had been executed by another nation of workmen; but it was not long before we came to a small niche in the rock, destined apparently to hold a figure, and beyond was a tablet bearing an inscription in Latin. (..) A little beyond this is a tablet basement, supporting an arched frame-work, with the upright figure of a Roman in his toga, much mutilated, and his head broken off; but the attitude is graceful, and the details good. Ainsworth
Some of the Roman memories described by Ainsworth are lost, but others were found.

The modern town consists of only 145 houses, and has a population of about 900 souls. From its difficulty of access it is used by the Turks as a place of detention for deposed beys and governors. Ainsworth
The Phoenicians who first sailed the Black Sea certainly noticed a repaired site between a hill projecting from the coast and an islet very close to it. In the VIth century BC seamen from Miletus founded a colony called Sesamos in that location. The town later on became part of the Kingdom of Pontus and it was called Amastri or Amastris (today Amasra). The Romans conquered Amastri in 66 BC and under their rule the town continued to flourish. 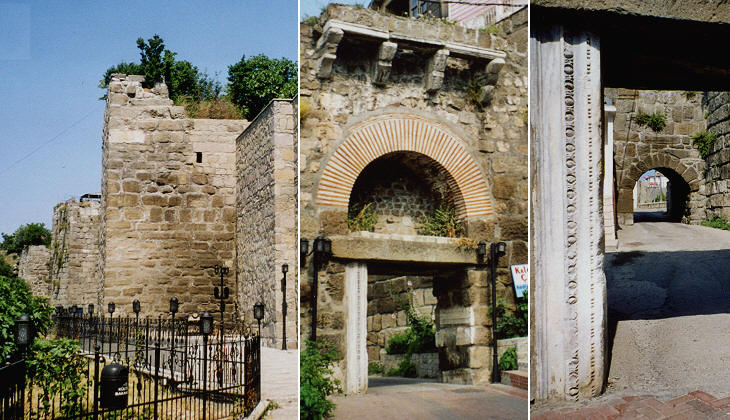 The modern history of Amaserah is involved in obscurity. It occupies no place in the Byzantine or Turkish annals. The character of its ruins attests that it belonged to the Genoese, and that, like Sinope and Trebizond, it was once one of their active and prosperous commercial entrepots. Ainsworth
Genoese merchants settled in Amastri in the XIIIth century and their influence grew to the point that the town became a city-state ruled by them. They built new walls or strengthened those built by the Romans and the Byzantines. In doing so they used elements of former pagan temples (in the background of this page you can see a Roman relief). 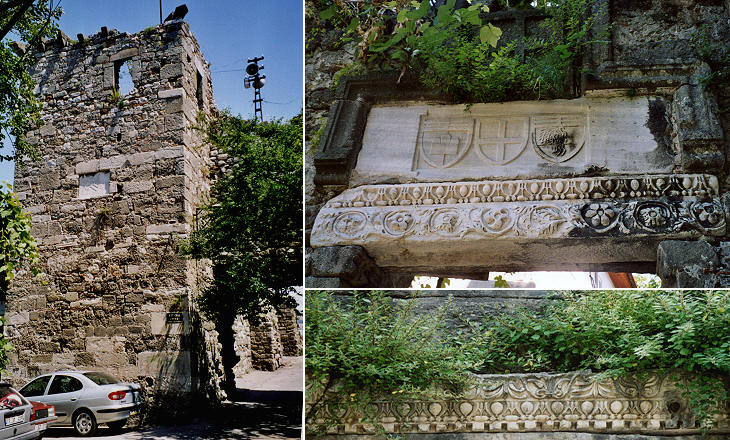 The whole of that part of the ancient and modern town which occupies the peninsula is surrounded by a wall, defended by towers, which appear to have been renewed at various times, but to have received their chief regeneration from the Genoese, whose escutcheons are over the gateways, and whose preference of utility to ornament is well exhibited by their irreverent intermingling of Gothic tracery and Byzantine wreaths amid the solid blocks of Roman architecture; and even eagles, carefully sculptured in bas-relief on slabs of white marble, are to be seen prostrate at the angles or corners of the walls which they once adorned. Ainsworth
The hill on the mainland was additionally fortified with a citadel, of which a few towers still exist. The citadel as well as its outer walls is decorated with several coats of arms of the Genoese rulers. The symbol of Genoa is the cross of St. George. 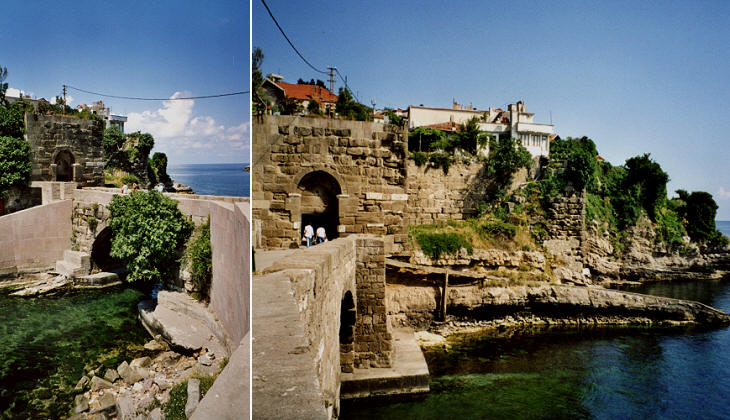 Roman Bridge (left) and fortifications of the islet (right)

It is built upon a rocky peninsula that has two necks, the first formed by a lesser and greater bay of the sea; the second by a small inlet, over which a narrow causeway leads to what was formerly the castellated or military portion of the town. Ainsworth
The Romans built a bridge to link the two hills of Amastri. The access to the islet was fortified so that a last defense was possible even if the assailants had breached the outer walls and conquered the citadel. 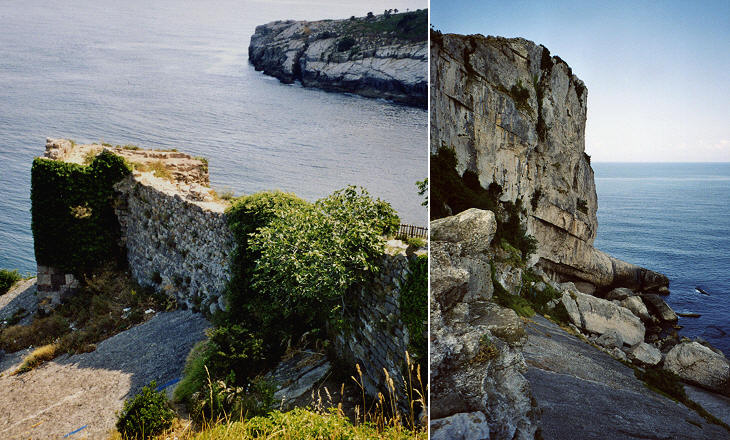 Walls (left) and rocks (right) of the islet

The cape called Diwan Burnu (Point of the Divan), is formed of rude and nearly perpendicular rocks, which rise above the little bay to the south-west, the whole of which was formerly built in with large hewn stones, like a well kept harbour. Ainsworth
After the fall of Constantinople in 1453, both Venice and Genoa became aware that the Ottomans, led by Sultan Mehmet II Fatih, were in the process of building a powerful and stable empire. They tried to lessen this threat by encouraging the autonomous kingdom existing in central Anatolia (Karaman) to incite revolts in the Ottoman Asian possessions. In 1461 Mehmet II moved by sea and land along the coast of the Black Sea and conquered the remaining Genoese and Byzantine ports.