- Fortresses
(Emperor Constantine VI in a fresco at Sumela)

You may wish to see a page on Trebizond with a map of the region first.

The Empire of Trebizond stretched for hundred of miles along the coast of the Black Sea and it included several ports which were founded by the first settlers who explored this sea. A series of little fortresses protected these ports from pirate raids and most often from threats coming from the Anatolian tablelands. The fortresses are usually of a rather small size, sometimes more a fortified watching post than a castle which could withstand a siege. 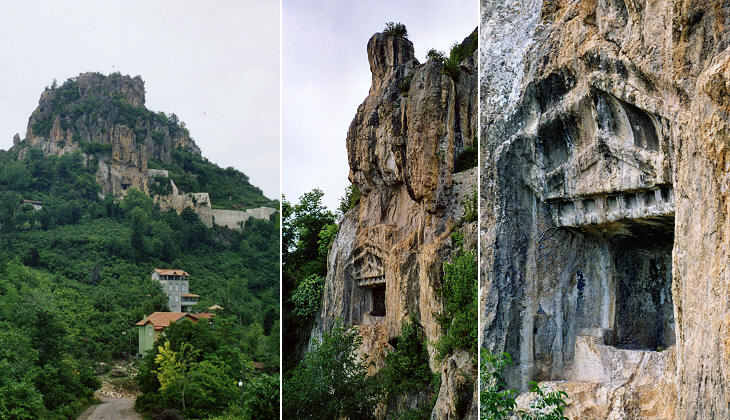 View of the fortress and of the rock-cut tomb

(in June 1835) I was no sooner lodged than I made inquiries of my Greek landlord; (..) he said the only object of interest near Unieh was a castle, built on the summit of a lofty rock, about an hour off towards the interior, with wonderful flights of steps, treasures, baths, etc., excavated in the solid rock. I was anxious to see what had given rise to such a description, and accordingly at once put myself under the guidance of two Greek boys, and reached the foot of the castle-hill, after a walk of nearly an hour and a half up the valley of the Unieh Su. The road at first led through a rich country producing corn and flax; the latter, grown chiefly for the sake of the seed, was now ripe. The castle is situated on the summit of a lofty and almost perpendicular rock, surrounded by deep glens and wooded hills, with here and there a grassy glade, above which it rises to the height of nearly 500 feet. (..) To the south the rock rises perpendicularly 200 feet, presenting to the view a tetrastyle temple cut in it halfway up the smooth face of the precipitous cliff, through which an opening leads into a small cave, where, according to tradition, a hermit formerly dwelt. It is now inaccessible; no ladder could ever reach it; and a narrow path scooped out of the face of the rock is almost obliterated.
William Hamilton - Researches in Asia Minor, Pontus and Armenia - 1842
The little port of Unye is linked by a road to the town of Niksar (Neocesarea) in the tableland. To protect Unye from threats coming from that road a little fortress was built to early detect and possibly check the enemy. The fortress is located at the top of an isolated rock at the centre of a valley. The ruins, the thick vegetation, the opening of an ancient rock-cut tomb all contribute to create very evocative feelings of mystery. Tombs of this kind are very common in Lycia from Kaunos to Myra. 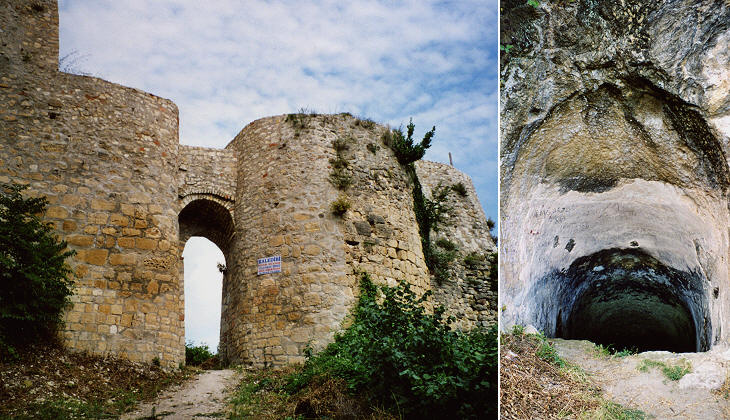 Within fifty feet of the summit I found a subterranean staircase descending to a great depth at an angle of 45°. It must have been either the entrance to the fortress, or a secret contrivance by which to obtain water, unseen and unmolested by the enemy. It had been finished with much care, but, having neither lights nor a rope with me, it was impossible to attempt the descent, or to ascertain its depth. I threw down some large stones which bounded off twenty or thirty steps at a time, and I heard them distinctly for twenty-four or twenty-five seconds, when the sound became too faint to be distinguished. The steps, which had originally been carefully cut, were so worn and broken as to present a highly inclined plane, on which it would have been almost impossible to have preserved a footing. Hamilton
While most of the fortress is ruined, the entrance protected by round towers has been restored. The Byzantines excavated the rock in order to have an alternative exit through which to flee the fortress or to attempt a sally. 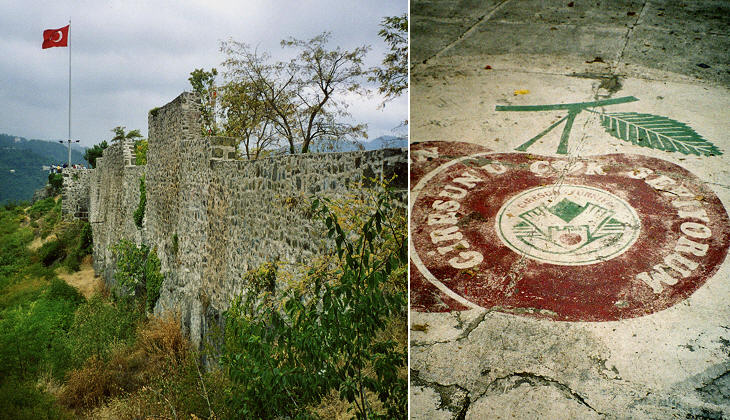 The castle of Giresun and the town symbol

The town of Kerasunt, which represents the Phantacia of antiquity, is situated on the extremity of a rocky promontory connected with the main by a low wooded isthmus of a pleasing and picturesque appearance. The highest point is crowned with the ruins of a Byzantine fortress, from which a strong wall, with Hellenic foundations, stretches down to the sea on both sides. (..) Great uncertainty prevailed even in former days respecting the early name of this place; for, though all writers speak of it under the name of Phantacia, Arrian states that it was originally called Cerasus; (..) it is curious that the same error should have prevailed in modern times, and that the name erroneously given to it by Arrian should really have been applied to it in the present day, to the entire exclusion of its ancient name of Phantacia. (..) Near the crest of the hill, where the wall runs N.N.E, for some distance, are the ruins of a more modern castle, attributed to the Genoese or Byzantines, and called the Utch Kaleh; and on one of the angles of the wall is a small wooden fort with loopholes for musketry. (..) The wild cherry grows in great abundance on the neighbouring heights, and no others could be procured in the market; the fruit is small and rather bitter, but well-flavoured, and not acid. Hamilton
A high hill projecting into the sea was a perfect site for building the Acropolis of a Greek town. Over time the Acropolis became a fortress of which a few walls still exist. Today the area of the castle is a preferred picnic site: I noticed there the symbol of Giresun, because the town is said to have given its name to cherries. 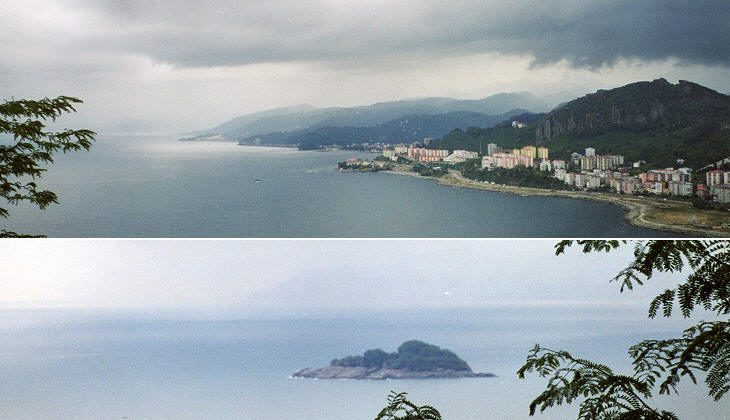 When the Black Sea is black and Giresun Island

Soon after three we landed on an island between nine and ten miles from Cape Zefreh, and called by the Turks Kerasunt Ada. This is evidently the Insula Aretias, mentioned by Apollonius Rhodius as celebrated for a temple of Mars, said to have been erected by two Amazonian Queens, Otrere and Antiope. It is between three and four miles from Kerasunt, which agrees with the 30 stadia of Arrian. (..) It is overgrown with weeds and brambles, which almost conceal the remains of the surrounding wall. A large tower with embrasures and windows stands near its southern extremity, but showing no traces of Hellenic origin. Hamilton
Why the Black Sea is called black is a question which has several answers. According to some experts, its name comes from the sulphurated hydrogen that blackens all metal objects dropped to the ocean floor. A variation of this explanation makes reference to the fact that due to scarce oxygenation its deeper waters are toxic. Most likely the Turks called it black in the sense of inhospitable, the same impression the Greeks had at first, although, after having settled there, they changed their mind and called it hospitable (Euxinos).
Another aspect of the Black Sea which appeared unusual to the first Greek settlers was its almost total lack of islands. So the Greeks appreciated very much finding this small islet (totally irrelevant from an Aegean Sea standard) near Giresun and they hastened to build a temple to Mars on it. 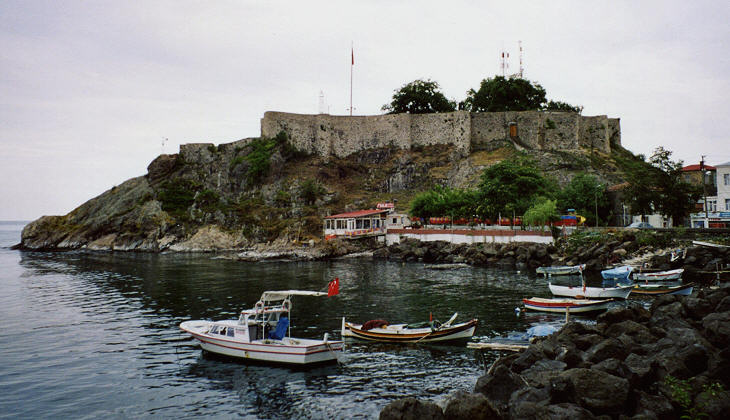 I awoke early to a heavy rain and fog, driven across the Euxine from the steppes of Russia by a strong north-wester; and I proceeded, in company with the Agha's saraff or banker, to visit the old castle at the extremity of the rock on which the konak is situated; this rock forms one of three distinct rocky headlands, on which the town of Tripolls or Tirebolu is placed, with three intervening bays or harbours, and from which the ancient town probably derived its name. In these bays there is very deep water; but as they also contain many sunken rocks, the anchorage is not safe. The castle itself was much ruined, with some rudely carved stones over the gateway; a small battery of four guns has lately been erected here for the defence of the town, but the embrasures are so placed that two of the guns can only be brought to bear upon the town itself. Hamilton
Tirebolu is a little port between Giresun and Trebizond. The harbour is protected by an apparently imposing, but actually rather small fortress, where you can go and sip a tea. Ruins of similar fortresses located on the sea can be found before reaching Trebizond. 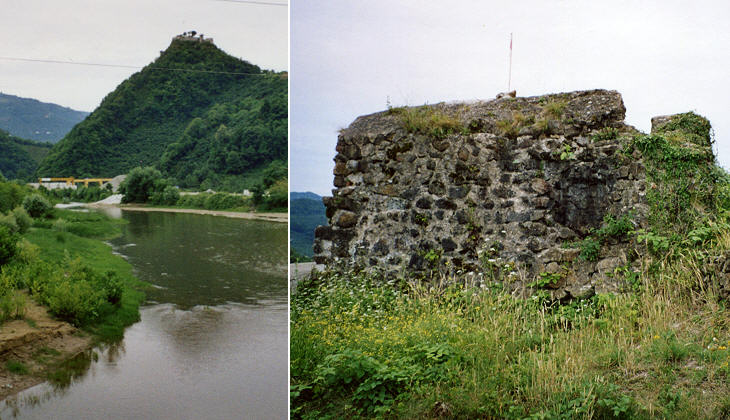 The ruins of another castle and walls of considerable age exist, but no remains of Hellenic times are anywhere to be seen. (..) The situation, however, was very commanding, and the view up the river very striking. About ten miles off I saw on the summit of a lofty hill a remarkable-looking rock, which my guide called, in a strange mix- ture of languages, Petra Kaleh, or rock-castle. Hamilton
A few miles off Tirebolu, near the town of Espiye, there is a castle protecting the coast from attacks coming from the tableland. Apart from the walls little else ìs left of the old Byzantine fortress. 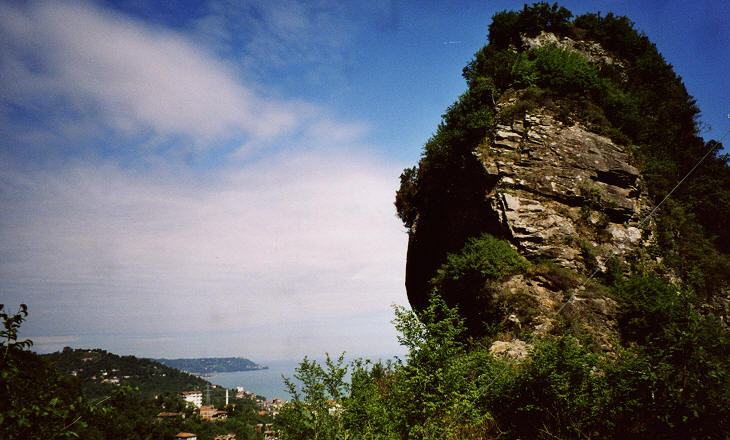 The purported castle of Surmene

In May 2005 boralioglu@gmail.com a student from Surmene wrote me confirming that there is not a proper castle in the area, but that on top of the rock there are some ruins of walls and signs of a well, so that it is likely it housed a sort of fortification to protect the road leading to the town.