- The Town of the Knights
(relief in the fortress of Bodrum)

The medieval city is located within a 4 km-long wall. It is divided with the high town to the north and the lower town south-southwest. Originally separated from the lower town by a fortified wall, the high town was entirely built by the Knights.
From the UNESCO synthesis of the universal value of the Medieval City of Rhodes which in 1988 was added to the World Heritage List.
The cross wall separated off the northern portion of the city, or Castello, which was reserved for the Knights, and occupied about one-third of the entire area, from that part which was inhabited by the citizens.
Henry Fanshawe Tozer - The islands of the Aegean Sea. Publ. 1890, but Tozer began his travels in 1874.
The Knights lived in the northern section of the town in an area reserved to them which was called Collachio: the rest of the town was called Burgo (by the Knights) or Hora (by the Greeks). A similar approach was followed by the Knights at Borgo, where they initially settled when in 1530 they moved to Malta.

(left) Street of the Knights; (right) a window in the street

The Order was organized into seven "tongues", each having its own seat, or "inn". The inns of the tongues of Italy, France, Spain and Provence lined the principal east-west axis, the famous Street of the Knights, on both sides, one of the finest testimonies to Gothic urbanism. UNESCO
Friday, November 24th, 1815. The street of the Knights is about eighteen feet wide, with a narrow flag pavement on each side, and on the houses along it are seen, very frequently, the Arm of the Knights sculptured in basrelief.
William Turner - Journal of a Tour in the Levant - 1820
This famous street, which descends in a straight line by a gradual slope towards the port, is (..) the centre of interest in the place, since it contains the Priories, which were the headquarters and places of meeting of the different nationalities, and their escutcheons and those of their most distinguished men can in many cases be seen on the façades. Tozer
There were seven "Langues": Germany, England, Italy, Spain, France, Provence (south-eastern France), Auvergne (a region in the centre of France). In 1462 the Langue of Spain split into Castille and Aragona. Each Langue was responsible for the defence of a section of the walls and built a small palace which served for meetings and as official residence of the Langue chief knight. The main street of Collachio started from the square where the Hospital, the Cathedral and the Hotel de la Langue d'Auvergne were located and led to the Citadel, a fortified building where the Grand Masters had their residence.

(left) Great Hospital; (right) detail with a relief depicting two angels at the sides of the coat of arms of Grand Master Jean de Lastic

The original hospice was replaced in the 15th century by the Great Hospital, built between 1440 and 1489, on the south side of the Street of the Knights. UNESCO
May 18th. 1840. Armorial bearings and architectural ornaments, of what we call the Tudor age, are seen on the fronts of almost every house. (..) Many dates are on the walls, blended with gothic ornaments.
Charles Fellows - An account of discoveries in Lycia - 1841
The Knights did not forget the original purpose of their Order and so one of the most imposing buildings of Collachio is the Hospital which was built by Grand Master Jean de Lastic in 1440 and enlarged by Grand Master Pierre d'Aubusson in 1481-1489. The ward for the sick was located in the upper floor, while warehouses and stables were at the ground level.

Opposite to the English Priory was the Hospital of the Order, a large building of rude but massive construction, with a deep Gothic portal, and a court inside. This has been converted into a barrack. Tozer
The hospital had a large courtyard surrounded by a double portico built using a design typical of Gothic architecture. It was restored by the Italian administration in 1913-1918 and later on used to house the Rhodes Archaeological Museum.

The objects I went to see were the church of St. John, and another, now both mosques; the palace of the Grand Master and a convent. These were all large massy buildings in the Gothick style, of which the palace is by far the largest, and, is indeed a very handsome building. Turner
Within the memory of the present generation, however, two objects, which were among the greatest glories of the place, have been destroyed. The church of St. John, the Sanctuary of the Order was destroyed in 1856 by an explosion of gunpowder, which was set on fire by a flash of lightning that struck an adjoining minaret. The neighbouring palace of the Grand Master, which was already in a ruinous condition, was still further damaged by the same catastrophe, so that now only the lower storey remains. Tozer
The Langues which had a leading role in the Order were those of Provence and Auvergne and this influenced the architecture of Collachio, which has features typical of Southern France; Catholic churches had a Gothic design, similar to that existing in nearby Cyprus (which was ruled by the Lusignans who came from Southern France too). You may wish to see the church the Knights dedicated to St. John at Valletta, their new capital on Malta in 1573. 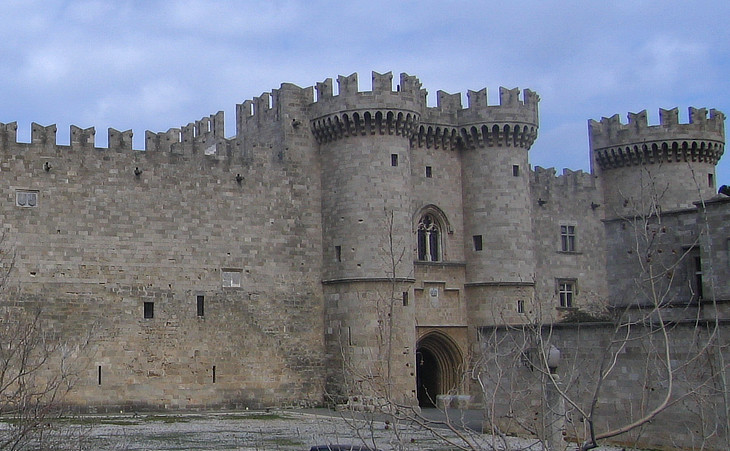 Palace of the Grand Masters

The Italian occupation after 1912 left a strong imprint on the urban landscape of Rhodes, with reconstructions of some of the major buildings. They must be considered, nonetheless, as a permanent integral part of the urban history of Rhodes. UNESCO
The palace was almost entirely destroyed in 1856. The Ottomans built military facilities on its site. Today's building is a 1937-1940 reconstruction by architect Vittorio Mesturino, which was based on medieval castles in Northern Italy, rather than on the Byzantine/Gothic features of the original palace.

To the north, close to the site of the Knights' first hospice, stands the Inn of Auvergne, whose facade bears the arms of Guy de Blanchefort, Grand Master from 1512 to 1513. UNESCO
On the bas-reliefs in the city which contained the arms of the Knights were generally dates, all of which that I saw were from 1492 to 1519, i. e., three years before the capture of the island by the Turks. Turner
The Great Hospital replaced an older one built by Grand Master Roger des Pins (1355-1365), which later on was used as a general armoury.

I went immediately ashore to the house of Signor Stephano Massa, a young physician, who was appointed six months ago by Mr. Werry Vice-Consul here. (..) In the morning I went with Signor Massa to observe what I had yet to see in the city. Turner
The languages that can be heard at the port are very motley, for the Jews, as in Salonica, are descendants of those who were expelled from Spain in the time of Ferdinand and Isabella, and speak a corrupt form of Spanish; and Italian, which, during the last thirty years, has been rapidly superseded by French in the Levant, but is still prevalent here. Tozer
In the early days of the Order in Rhodes the written language was French; towards the first half of the XVth century there was a move to Latin and after 1454 also to Italian. The spoken language in late XVth century was most likely lingua franca, a sort of Esperanto with many Italian words and it continued to be used until the early XIXth century. Members of local families of Italian origin were employed as dragoman (interpreters) or represented European countries at Rhodes and in other ports of the Ottoman Empire. 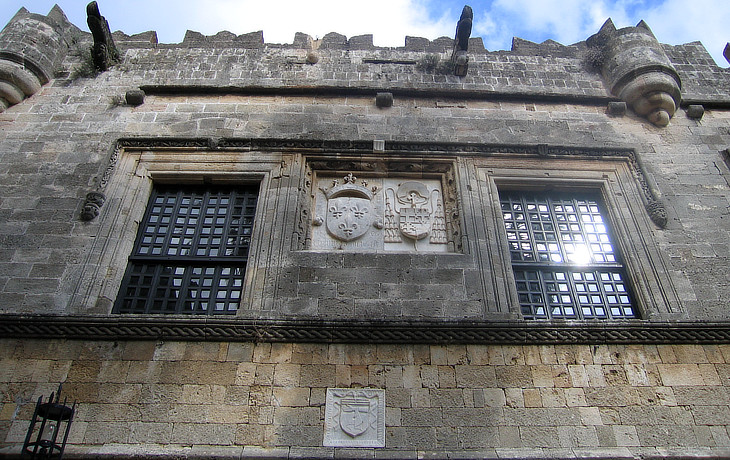 By far the handsomest inn is that of France which occupies a central position on the northern side of the street, and is adorned with the arms and cardinal's insignia of D'Aubusson, who successfully defended the city against the attacks of Mahomet II, and with those of the not less heroic, though less fortunate, L'Isle Adam. Tozer
Several Langues had their palaces along the Street of the Knights: they had decorated portals and windows in addition to many coats of arms. 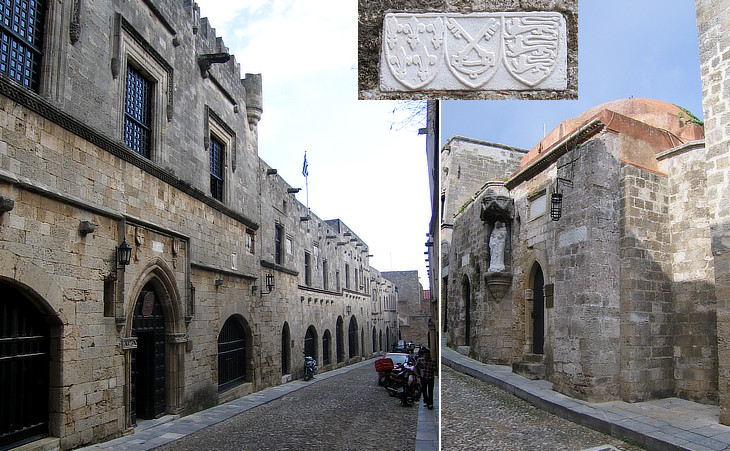 (left) Street of the Knights with the Auberge de France; (right) English Chapel

To an Englishman, however, the most interesting monument in this street is one of the least conspicuous - a little chapel, only the outer wall of which is visible, together with a groined niche for a statue reached by a flight of small steps; this was called the English chapel, and has the arms of England sculptured on its walls. It is now a mosque. Tozer

"Castellania", the Civil Tribunal and relief with the coat of arms of Grand Master d'Amboise

Not far off was the Chancery, or Palais de Justice, part of the façade of which remains; it is approached by a flight of steps. The architecture of this, as of all the other buildings, is Gothic, and forms a strong contrast to the Byzantine style of the ecclesiastical structures, and the Saracenic military architecture, which prevail elsewhere in Turkey; throughout the city pointed and ogive arches, cable mouldings, and ornamental finials and carved heads of doorways in that style, are found. Tozer
Burgo was the part of town where the merchants lived and had their warehouses; the lawsuits arising from their trade were settled in this elegant palace which was built by Grand Master d'Amboise at the beginning of the XVIth century.

In one part of this quarter, where there is an open space of ground, stands the Admiralty, the purpose which it served being shown by the emblem of three flags which is sculptured on a shield. Tozer
Another fine building of Burgo, notwithstanding its name, was most likely the residence of the Orthodox Bishop; the Knights were faithful to their promise to allow the Greeks to retain their allegiance to the Orthodox Church and in Burgo there were many churches in the traditional Byzantine style.

Domenico d'Alemagna, an Italian Knight, built towards the end of the XIVth century a residence for guests of the Order. After being greatly damaged during the 1480 siege and by an earthquake in 1481, it was rebuilt in 1516 by Costanzo Operti, another Italian Knight. Also on Malta the Italians dedicated their church to St. Catherine of the Wheel.

The image used as background for this page shows a portal on the side of "Castellania".