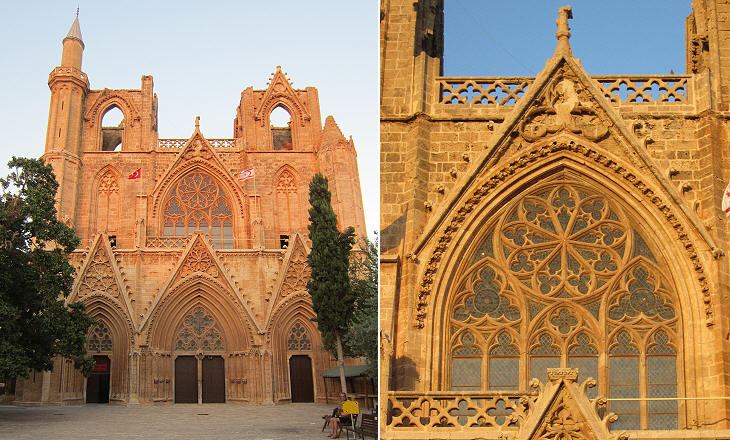 (November 1738) The antient piazza seems to have been very beautiful; the house of the governor is on one side, and the western front of the church of saint Sophia on the other; it is a most beautiful Gothic building, now converted into a mosque, but about three years ago two thirds of it was thrown down by an earthquake, together with the greatest part of the city. It is surprizing to see what a great number of churches there are in this city; St. George's, one of the most magnificent, was thrown down by the earthquake.
Richard Pococke - A Description of the East and Some Other Countries - 1745
I first entered the principal church Sta. Sophia, now converted into a mosque, and surmounted by a broken minaret. It is very large, and built in the Gothick style, mixed with Venetian ornament, the arches of the door and window being overtopped by a large triangle sculptured in high relief.
William Turner - Journal of a Tour in the Levant - 1815.
In the XIVth century Famagusta became a very important trading port in the Levant. French, Italian, Greek, Syrian and Armenian merchants lived together in a cosmopolitan environment, not uncommon in this part of the world. The different nationalities competed in building churches for their communities. 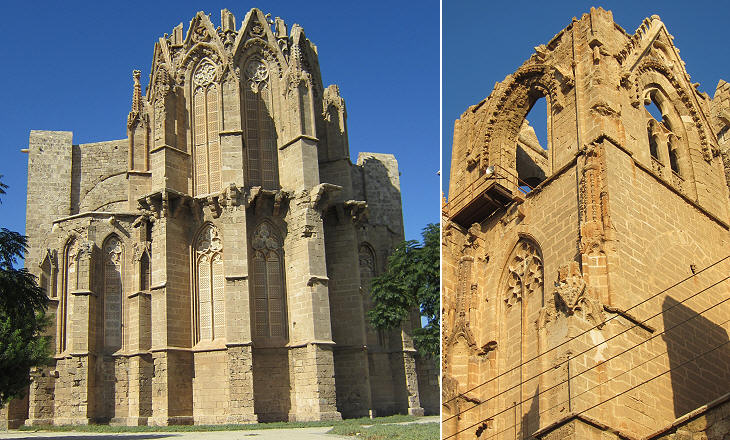 Nicosia was the capital of the Kingdom of Cyprus and coronations took place in the cathedral of that town. The Lusignans, the ruling family, however were also Kings of Jerusalem and a second coronation was held at Famagusta. St. Nicholas' was built between 1298 and 1328 at a period when the Lusignans were at the peak of their power and Famagusta at the peak of its wealth. St. Nicholas': details of the portals

In 1291 the Mamelukes conquered Acre and Tortosa, the last remnants of the Crusader States in the Levant and key ports of the trading routes between Europe and Asia. They were replaced by Famagusta which benefitted from the papal bulls which forbade direct trade between Christian and Muslim countries. The bulls were ignored by the many merchants of Famagusta who were not Catholics. Genoese and Venetian merchants could buy pepper and other spices from them without incurring papal wrath. 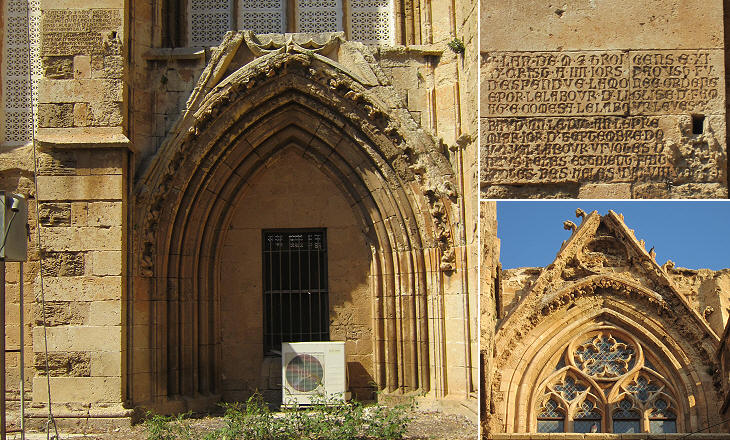 Text of the inscription in Old French: L an de mil et troi cens et xi de crist a iiii jors d aoust fu despendue la monée ordonnée por le labour d l iglise de Famag et comensa le labour l evesq Bauduin le dit an le premier jor de septembre douquel labour vi votes d deus lielcs estoient faites c x votes des heles aus viii. The meaning is not very clear, but it may refer to the utilization of parts of a previous smaller church for the completion of the new one.
The decoration of St. Nicholas is richer than that of the Cathedral of Nicosia which was built at an earlier time. The image used as background for this page shows another side window. 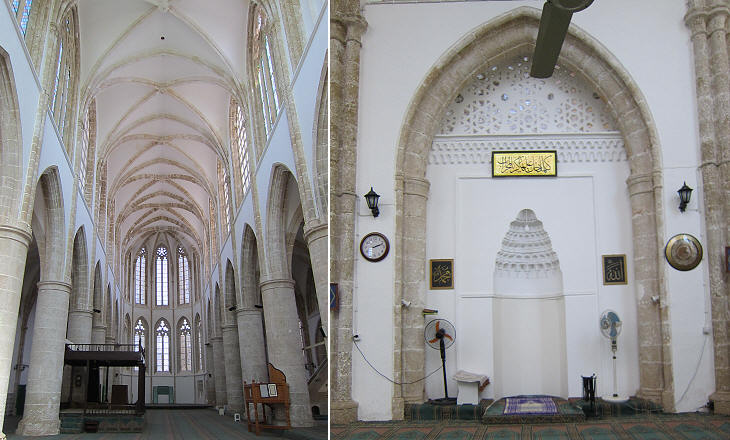 The interior which is about 120 feet by 90, and about 80 high, is disposed in three aisles, divided by thick round columns, which rise into arches. The windows were neatly fretted, and a recess for the altar was made at the top of the middle aisle. As is usual in Turkish mosques, its walls are now entirely naked, and it is furnished only with a few lamps and mats, and a small pulpit. Turner
After the Ottoman conquest of Famagusta in 1571, St. Nicholas' was converted into a mosque dedicated to Lala Mustafa Pacha, the Ottoman commander who seized the town after a long siege, but it was known also as Ayasofya to indicate it was the largest mosque of the town. The traditional emptiness of mosque interiors enhances the Gothic design of the building. 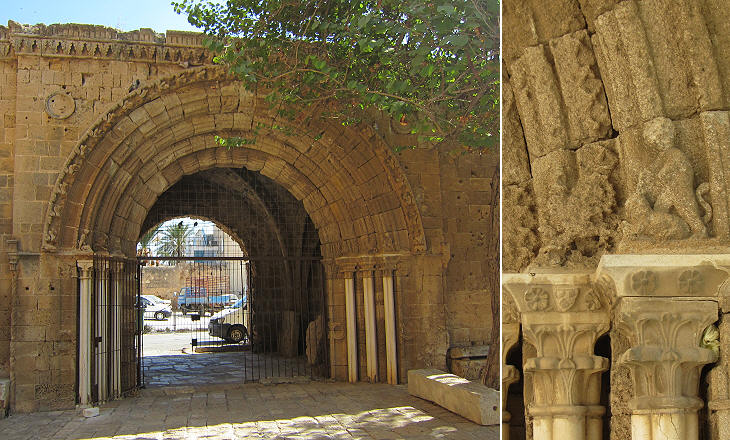 (left) Portal of a medieval loggia, located to the right of St. Nicholas', perhaps a meeting place for merchants; (right) detail of its decoration

The high number of elaborate portals is a characteristic of the Lusignan architecture of Cyprus. The one near St. Nicholas' was embellished with columns made with marble found at Salamis, an ancient Roman port four miles to the north of Famagusta. 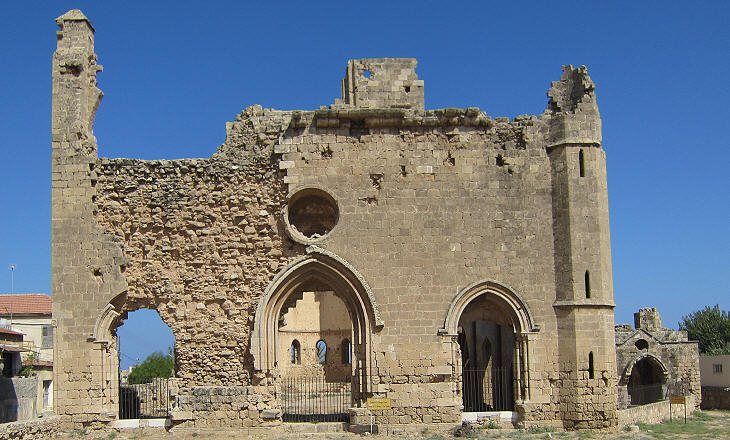 There is very little trade at this place, which is the reason why all provisions are cheap here. (..) The present buildings do not take up above half the space within the walls, and a great part even of those are not inhabited. (..) No Christian is suffered to live within the walls, unless it be in confinement. (..) They will not suffer a Christian to go in or out of the city, otherwise than on foot. Pococke
After the conquest of Famagusta, the Ottomans closed all Catholic churches, but not necessarily those of other Christian faiths in an attempt to gain the support of the Greek and Armenian population of the island. However, these communities were not allowed to retain large and prominent churches, so all the major churches of Famagusta were either converted into mosques or abandoned. St. George's was the Greek Orthodox cathedral and it was built in a mixture of Byzantine (the three apses) and Gothic (the windows) styles. 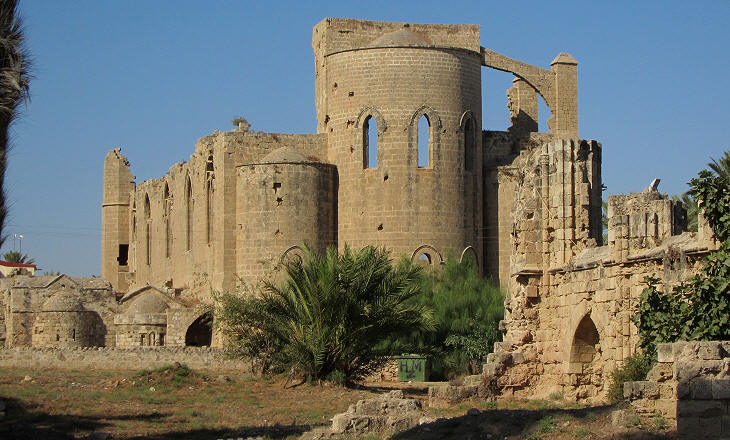 It is hardly credible that a city so lately flourishing should be so completely ruined as is Famagosto; of its numerous palaces and churches, not one remains entire. It is now inhabited by not more, than 100 souls, almost all Turks, for there are only three Greek families. These live in crumbling palaces, which they patch up to make habitable, and the only room in which they can live is blocked up by the fallen materials of the rest. The streets are in many places hardly passable, from the heaps of stones that choke them. But the city might easily be restored, for the walls and fortifications yet remain entire. Turner
In 1735 an earthquake struck Famagusta and it is likely it caused the collapse of many abandoned churches. Their ruins remained untouched because Famagusta had become a ghost town after the Ottoman conquest. The Greeks were not allowed to reside inside the walls and they lived in a suburb to the south of the town.
With the Ottoman conquest Famagusta lost its importance as one of the main trading centres of the Levant and Larnaca became the main port of the island. 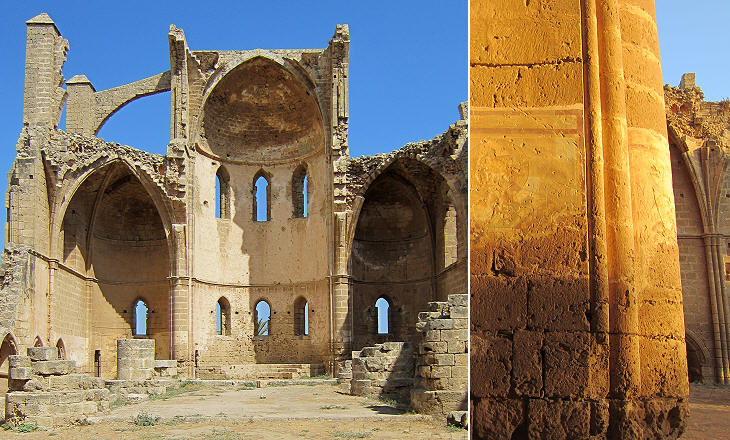 St. George's of the Greeks: (left) the three apses; (right) a detail of the right apse showing fragments of frescoes portraying saints

The three apses retain evidence of frescoes; they make the site very evocative, but without protection they are bound to disappear completely. The Smithsonian Magazine reported in March 2009: "In April 2008, under the guidance of Europa Nostra, a pan-European federation for cultural heritage, the Greek and Turkish mayors of the city met in Paris. They agreed to put aside their political differences and support efforts to preserve Famagusta. Europa Nostra hopes that their shared interest in conservation will create an opening for international agencies to donate money, without giving rise to legal or political disputes." 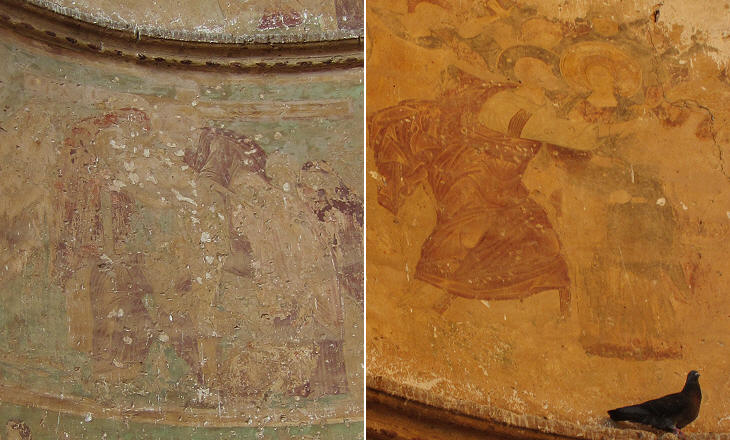 The photos which illustrate this page were taken in September 2012 and are almost identical to those which illustrated the page in 2002. Nothing was done in the meantime to protect the remaining memories of the past glory of Famagusta. 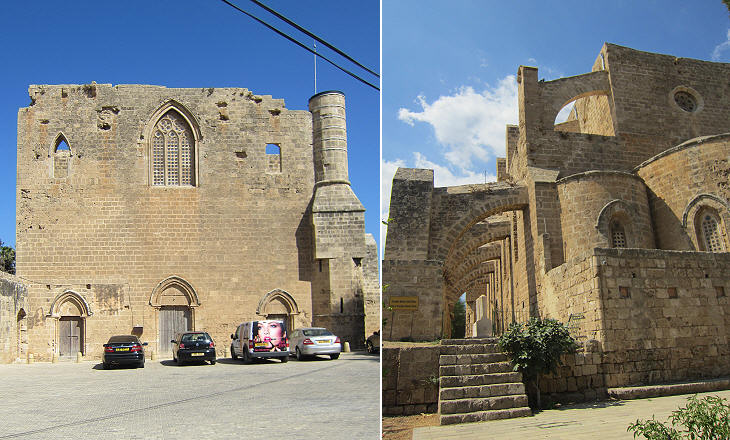 The third large church of Famagusta was dedicated to Sts. Peter and Paul and it was built in ca 1360, although parts of it were added at a later stage. The façade is rather plain when compared to the rest of the building. It was converted into a mosque dedicated to Koca Sinan Pacha, Grand Vizier after Lala Mustafa Pacha. Eventually it was turned into a storage depot and a library. 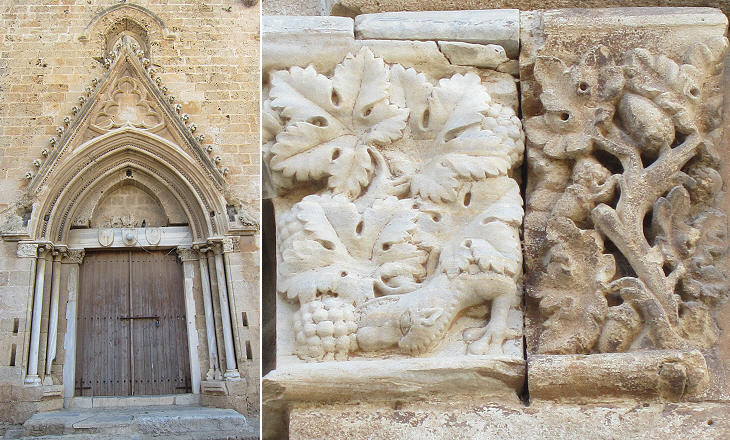 Sts. Peter and Paul's: (left) side portal; (right) detail of its decoration

The three portals of the façade are very small when compared to the size of the church. The design of the side portal (maybe reserved for the entrance of the king or the clergy and belonging to a previous building) is instead very elaborate. Perhaps some of the reliefs at the side of the portal came from Salamis, whereas the angels were made for the church. 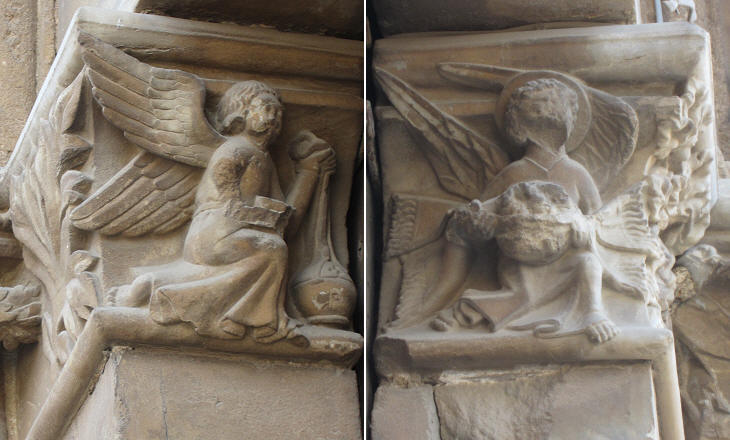 Sts. Peter and Paul's: angels in the side portal

Move to other pages of this section:
Famagusta - The Walls
Famagusta - Other Monuments
Nicosia - Walls and Houses
Nicosia - Churches and Mosques
Cirenes (Kyrenia)
An Excursion to Bellapais
Larnaca