The name of the town derives from Anti-Arados (opposite Arados), the Greek name of a small islet which stands opposite the town; so Arados preceded in history Tortosa and it retains some memories of its ancient past when it was a Phoenician principality which controlled what today is the coastal strip of Syria (see a Phoenician shrine at Baetocece).
Tortosa and the islet acquired great importance during the Crusades and were the last strongholds to fall in the hands of the Mamelukes.
In the XVIth century Torquato Tasso set at Tortosa the beginning of his poem Jerusalem Delivered where he sang the sacred armies, and the godly knights, that the great sepulchre of Christ did free:

First Book
The ArgumentGod sends his angel to Tortosa down,
Godfrey unites the Christian Peers and Knights;
And all the Lords and Princes of renown
Choose him their Duke, to rule the wars and fights.
He mustereth all his host, whose number known,
He sends them to the fort that Sion hights;
The aged tyrant Juda's land that guides,
In fear and trouble, to resist provides.
(Translated by Edward Fairfax (1560-1635); London 1600)

Walls of the citadel: side towards the sea

Tortosa was conquered by Raymond of St. Gilles in 1099 and became a fiefdom of the County of Tripoli, a Crusader State established immediately after the First Crusade; it was located near the "Gate of Homs" (in Arabic Nahr el-Kebir) a large breach in the mountain ranges behind the coastal strip which allowed access to the valley of the Orontes River and to important towns such as Homs (ancient Emesa) and Hama. For this reason Tortosa was not only a landing point for pilgrims to the Holy Land, but also a port of call for Genoese and Venetian ships. Former Hall of the Knights in the citadel

There are great remains of the castle, and the present town is within the walls of it, which are strong, and beautifully built, of very large hewn stone rusticated. They are of a surprising height, being at least fifty feet high; (..) the whole is near half a mile in circuit.
Richard Pococke - A Description of the East and Some Other Countries - 1745
In 1152 Nur ad-Din, Atabeg of Aleppo conquered Tortosa and a few years later also nearby Chastel-Blanc; after the Counts of Tripoli had regained control of Tortosa the town was assigned to the Knights Templars, who in a few years built a citadel near the harbour and fortified the whole town with walls; in the citadel they built a large hall for their meetings and ceremonies; today it can still be detected notwithstanding the many later buildings which have been nested inside it.
In 1188 Saladin, the conqueror of Jerusalem, managed to conquer Tortosa, but was unable to seize the citadel and he eventually left the town. 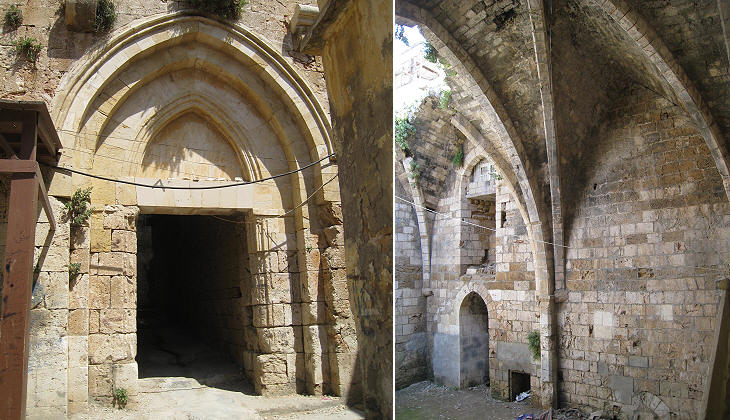 Chapel in the citadel: entrance (left) and interior (right)

Within the castle there is a church almost entire, consisting of one nave arched over. Pococke
The Knights Templars were a religious military order and its members were at the same time monks and warriors; for this reason they also built in the citadel a chapel; its elegant structure is very evocative of France, the country from which the majority of the knights came.
The destruction of many buildings of the citadel may not have been the result of its conquest by Qulawan, Mameluke Sultan of Egypt, in 1291, but rather by the fire set by Peter I King of Cyprus, who in 1367 briefly seized Tortosa. Cathedral (Our Lady of Tortosa): façade, a detail is shown in the image used as background for this page

Towards the east corner of the city there is also a very beautiful large church, which is entire; it is built of hewn stone inside and out, and consists of three naves; it does not seem to have been finished. Pococke
The Cathedral of Tortosa is the largest building of the Crusaders' period which is not related to a castle or the protection of a town. It was erected during the Templars' tenure of Tortosa on the assumed site of a church built by St. Peter and dedicated to the Virgin Mary; in 1202 the region was struck by a strong earthquake so it is likely that the cathedral was repaired and completed at a slightly later date; after the fall of Jerusalem in 1187 Our Lady of Tortosa became a major holy site in the Levant and the bishops of Tortosa could rely on donations and contributions for the construction and maintenance of the cathedral. 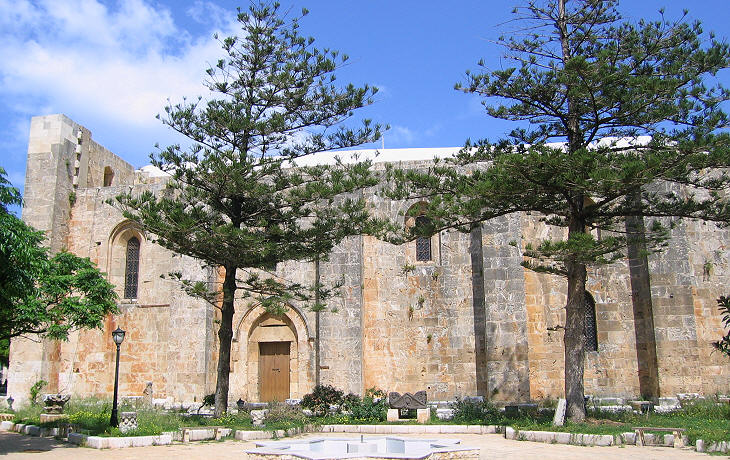 The overall style of the Cathedral can be defined as Romanesque, but some details indicate the adoption of Gothic patterns; because the building was located near the ramparts of the town it was also designed in order to be part of the fortifications of Tortosa. 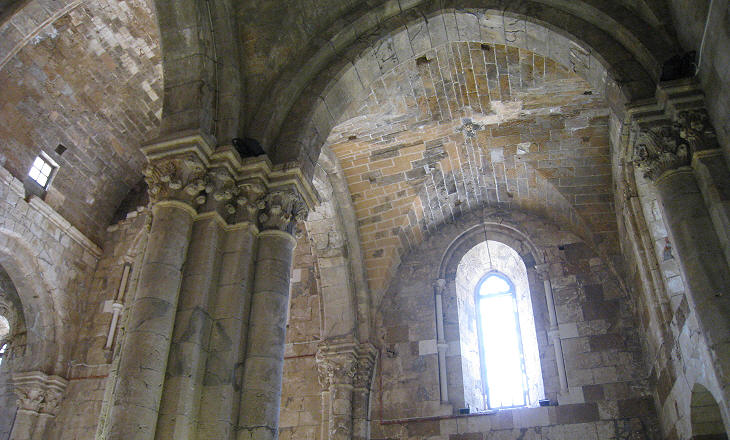 It is of the Corinthian order, and the arches, which are executed with the plain olive leaf, are built on square pillars, covered on the four sides with semicircular pilasters. Pococke
After the Mameluke conquest the cathedral was turned into a mosque; later on during the Ottoman rule, perhaps because the declining population of the town did not justify such a large religious facility, it was used as a warehouse. Today the building houses the municipal museum.
Tartous was a very modest fishery port until the 1950s when the Syrian government promoted its development to provide the country with a second modern harbour in addition to Lattakieh (ancient Laodicea) in the northern part of the coastal strip. 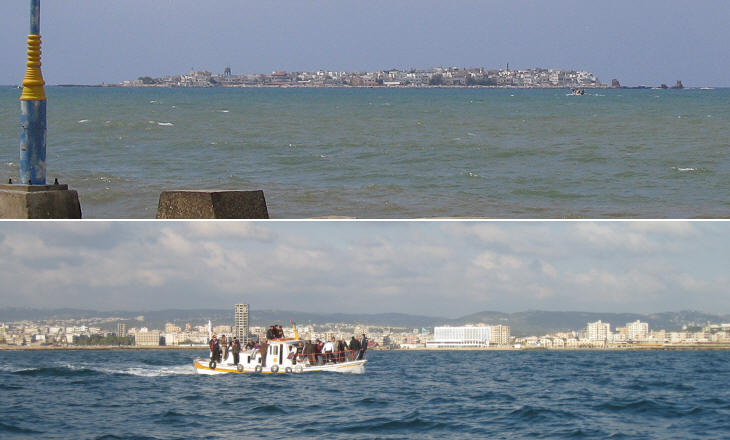 (above) Arwad seen from Tartous; (below) modern Tartous seen from the boat returning from Arwad

I went over to Ruad the antient Aradus, which is a very rocky island; (..) it is reckoned to be about two miles from the continent. Pococke
Arwad is a very tiny islet with a maximum width of about half a mile and yet when in 1291 the Knights Templars were forced to surrender Tortosa to the Mamelukes they retreated to Arwad and for eleven more years they held the island in the hope of a new crusade to free the Holy Land.
Today a long series of cafés and restaurants wait for the inhabitants of Tartous to take a short (and very amusing) boat ride there. 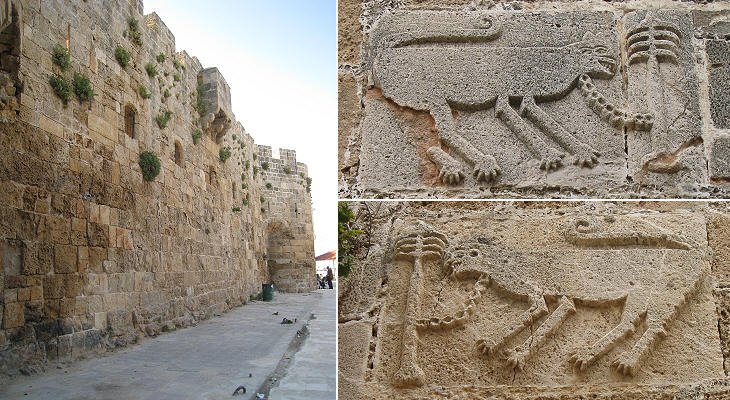 This city is said to have been built by some Sidonians, who were banished from their country. At first they were governed by their own kings, but afterwards they followed the fate of Syria. However, in some dissensions between the princes of Syria, they obtained the privilege of protecting all persons that fled to them, which added greatly to the number of their people, and to their strength. Pococke
The islet was entirely surrounded by walls, parts of which dated back to the Phoenician period; two castles completed the fortifications; a small one near the harbour and a larger one on the highest point of the islet; the latter was almost entirely redesigned and modernized by the Ottomans, but it did not avoid the seizure of Arwad by the French in 1915; during the French Mandate (1923-1943) it was used as a prison for Syrian politicians advocating the independency of their country. 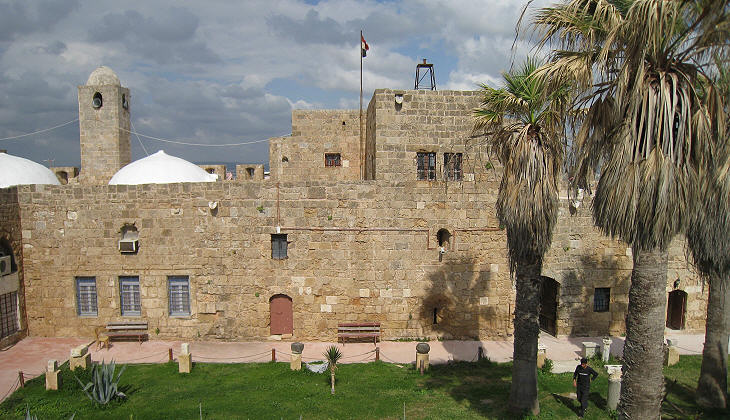 The Knights Templars' hopes for a new crusade faded away when in February 1300 Pope Boniface VIII called the First Jubilee Year by which pilgrimages to Rome replaced those to the Holy Land. Arwad fell in 1302 and the majority of the knights were killed in the fight; a few of them were taken prisoner to Cairo where they waited in vain to be ransomed.
Their order was powerful and immensely rich and yet (perhaps because of this) it was approaching its dramatic end; Philip the Fair, King of France, charged the Knights Templars with a long series of crimes and Pope Clement V, who lived in France, supported the charges: in 1307 the Pope called on all monarchs to arrest the knights in their countries and to seize their assets; in 1312 the Order was formally dissolved and in 1314 the last Grand Master was burnt alive in Paris. 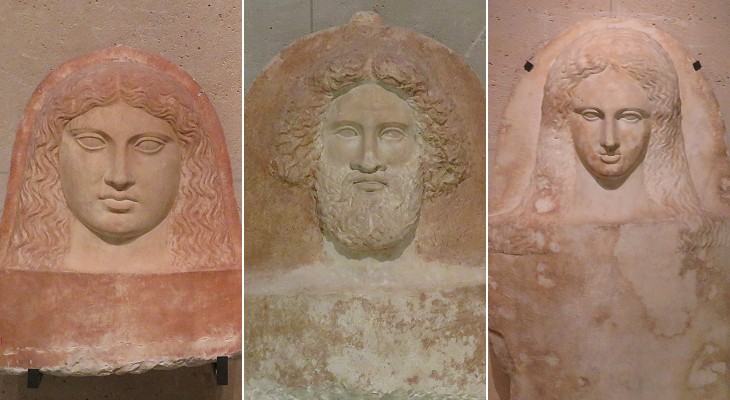 Louvre Museum in Paris: details of IVth century BC Phoenician sarcophagi found near Tartous (see other similar sarcophagi in Beirut, Istanbul and Sicily) 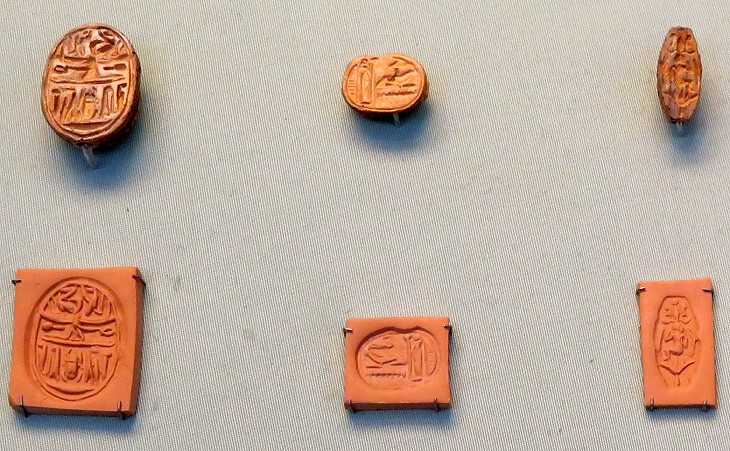