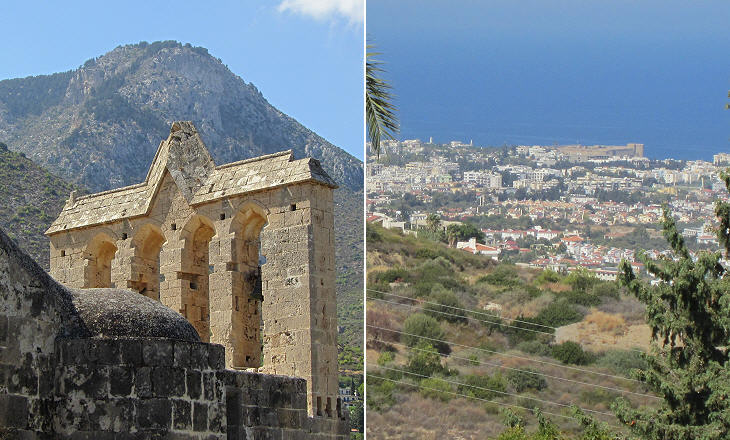 Bellapais, a corruption of Abbaye de la Paix stands on a hill south of Kyrenia and it enjoys a commanding view over the sea and the range of mountains which divides the northern coast of Cyprus from the central plain where Nicosia is situated. The location was chosen because it was easy to defend.
It should be observed that the Abbey is built on the spur or side of a hill, which on the north side of the buildings forms a cliff about 100 feet high. On the south side towards the hill an artificial moat or dry fosse was doubtless cut in such a way as to prevent any access to the Abbey except across a drawbridge. This dry fosse has subsequently been filled up, and only traces of it remain at its west end.
George Jeffery - A Description of the Historic Monuments of Cyprus - 1918. 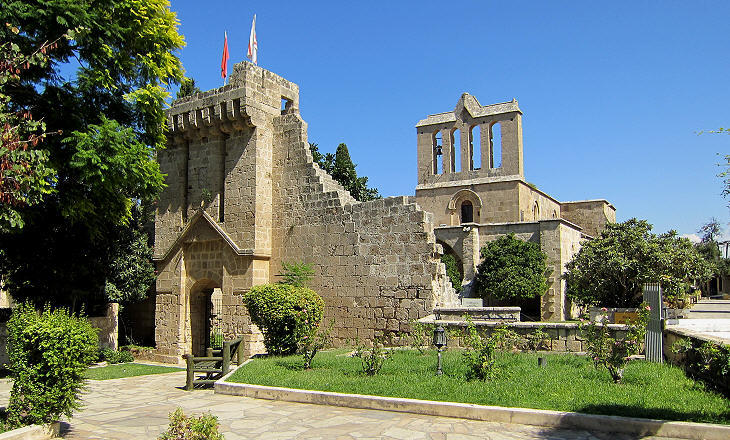 The Abbey was built over a long period of time, starting from 1198-1205 when Augustinian monks who fled Jerusalem settled in this spot. In 1206 the Abbey was consecrated and assigned to the Premonstratensian Order, which was founded by St. Norbert in 1120 when he obtained permission to found a monastery at Prémontré near Laon in northern France. The members of the Order were known as Reformed Augustinians as they followed the rule of St. Augustine. 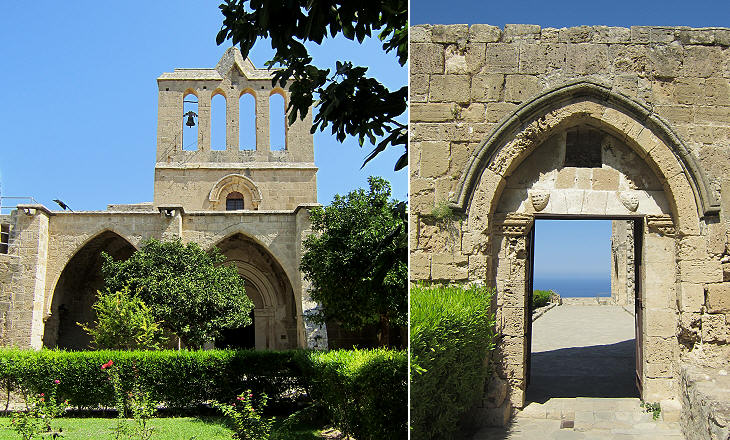 (left) Façade of the church; (right) gate leading to the cloister

The Abbey was enlarged and embellished especially during the reigns of King Hugh III (1267-1284) and King Hugh IV (1324-1359).
The Abbey is certainly the most magnificent souvenir and architectural monument of the Lusignan Dynasty of Cyprus. It was designed on a scale and with a completeness worthy of its royal foundations and patronage. Such an example enables us to realize the descriptions of several Lusignan palaces and other buildings elsewhere in the island, of which we now have no traces remaining. Jeffery 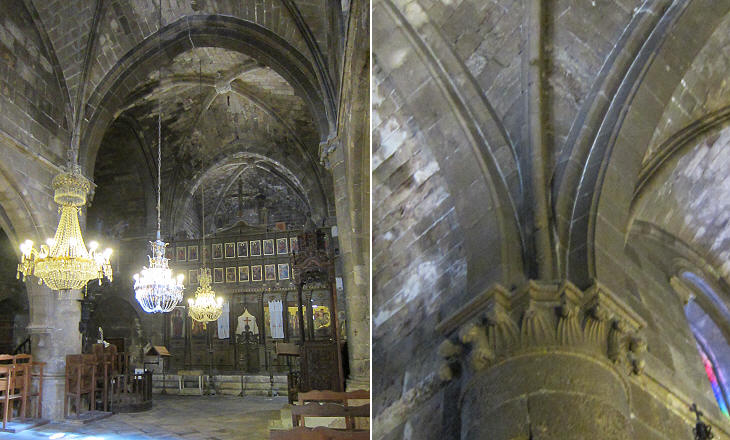 In 1570 the Ottomans conquered Nicosia and Kyrenia; the Abbey was given to the Greek Orthodox Church, but it soon fell into disrepair. Some changes were made to the church, especially by closing windows, but eventually the building was abandoned for a long time until part of it became the parish church of a small village built near the Abbey. 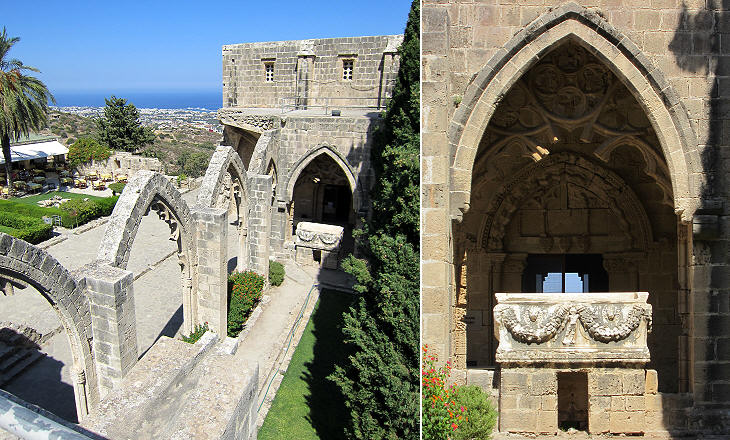 (right) View from the roof of the church; (right) ancient sarcophagus placed opposite the refectory and utilized as a water tank (very similar to that in the main square of Famagusta; it likely came from Salamis)

In 1683 Cornelis de Bruijn, a Dutch painter and traveller best known for his views of Persepolis, visited the Abbey and described it in A Voyage to the Levant. He found it in good condition.
It is a kind of fortress in itself and pretty well entire. Passing the gate you turn to the left, and about twenty paces further you pass a second gate. On its cornices are carved in marble three different coats of arms. To the right of this gate you mount twenty-seven steps, nearly all ruinous. Next you cross a large open space where are a few trees, and twenty-eight paces farther one comes to a building composed of four great arcades, to the left of which is a fine square apartment, now unroofed; again you pass through another room and enter the cloister, a quadrangle of great beauty and dignity, and as fair and whole as if it were but just finished. Between the two first columns at the entrance of the garden there is a fine marble cistern. It is in the form of a tomb, and carved around it is a wreath which a little child on either side holds up with its hands, one of the children is somewhat injured and the other is headless, and in other parts the tomb is mutilated. Bound it are six lions' heads, two on each of the longer sides, and one on the narrower. At each of the corners is the head of a young ox, all in low relief and of fair execution. 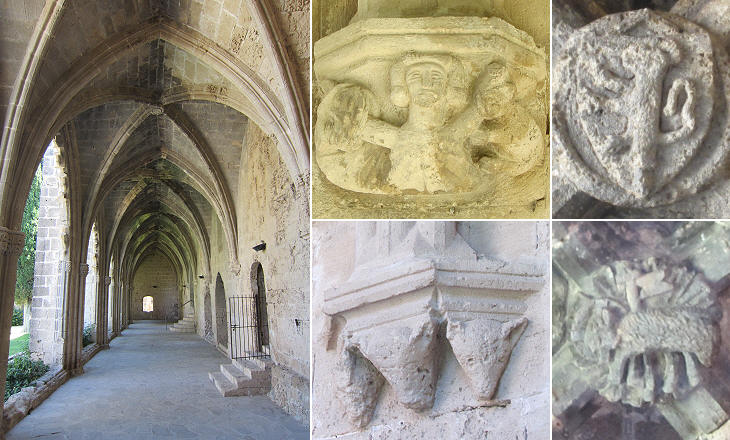 (left) A side of the cloister; (centre) capitals; (right) junctions of the arches: (above) heraldic symbol of the Lusignans; (below) Holy Lamb. The image used as background for this page shows another relief in the cloister

The vault on the garden side is upheld by eighteen pillars set in order in the middle, each of them is thirty-two palms thick, the capitals are Corinthian: the columns themselves of fair height. They make a kind of arcade, leaving wide spaces, through which you enter the garden between one column and the next. The ornaments of the arcades are all broken, but you can see their style. The inner side is an unbroken wall, and there are full sixteen feet between it and the columns. Van Brujn 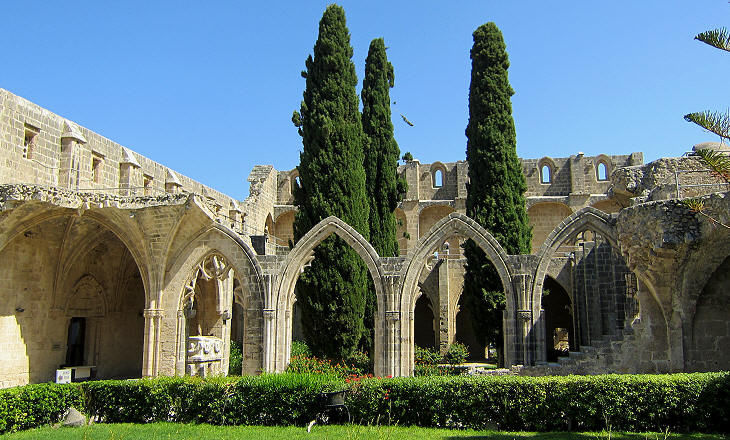 Western view of the cloister

Life at the Abbey was rather pleasant for the Abbot and his brethren. Marriage was largely tolerated and the monks' children were admitted as novices in the community. The Abbey could rely on the revenue of several fiefdoms which the Kings of Cyprus and local noble families had donated. 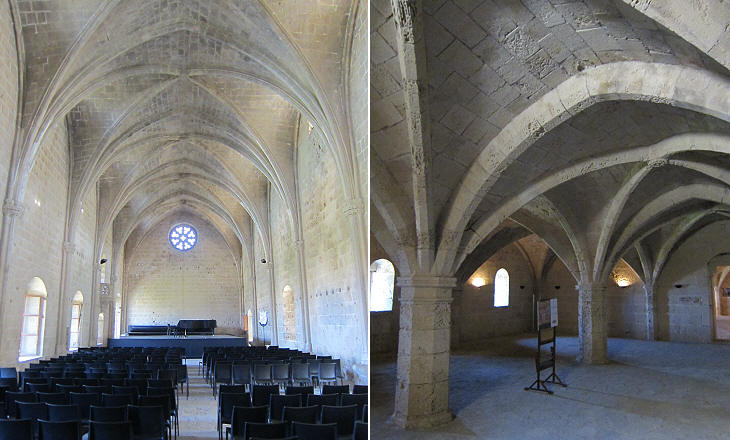 A door on the left leads into a fine room (the refectory), which looks newly built, with six large windows giving a pleasant view of the sea. It is ninety feet long by thirty-two wide, it has a fine arched vault supported by fourteen pillars, seven on each of the longer sides, and is closed at each end by an unbroken wall. There is a curious pulpit. I came down to the vestibule of the convent, and then descending on the left a flight of twenty-one steps came to a room thirty-two feet broad and sixty-six feet long (the cellar), with a well built vault upheld in the middle by two pillars, three times the height of a man. One might fancy it all built five or six years ago. Van Brujn
We went to a most magnificent uninhabited convent, which is almost entire, called Telabaisè; it consists of a very beautiful cloyster; on one side of it there is a magnificent refectory, on the other a fine room up one flight of stairs, which might be a library, and under it there are two very handsome apartments, one of which might be a common refectory, and the other probably served to receive strangers; on a third side, is a church of a more antient and heavy building; all the rest is of a very fine Gothic architecture, and in the cloister they have made a cistern of a beautiful coffin of white marble adorned with bulls heads, cupids, and festoons of exquisite workmanship.
Richard Pococke - A Description of the East and Some Other Countries - 1745
After the Ottoman conquest the refectory was used as a village school, a prison and a hospital. Today the whole complex belongs to the Department of Antiquities and Museums of Northern Cyprus and the refectory is used as a concert/conference hall. 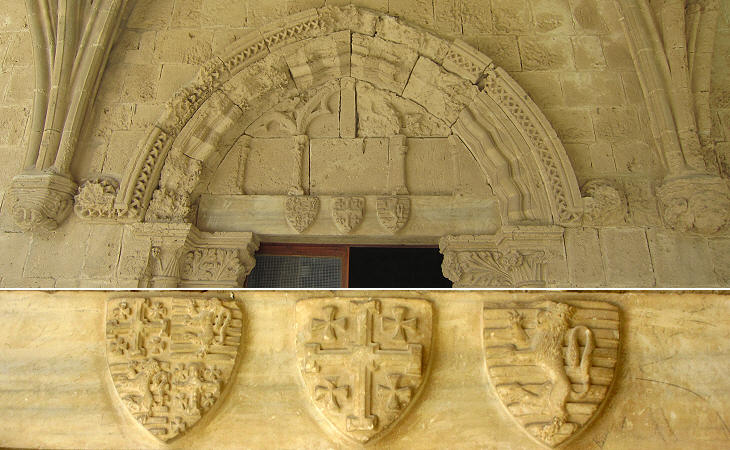 (above) Portal of the refectory; (below) coats of arms, most likely of King Hughes IV who is said to have restored the Abbey during his long reign (1324-1358) 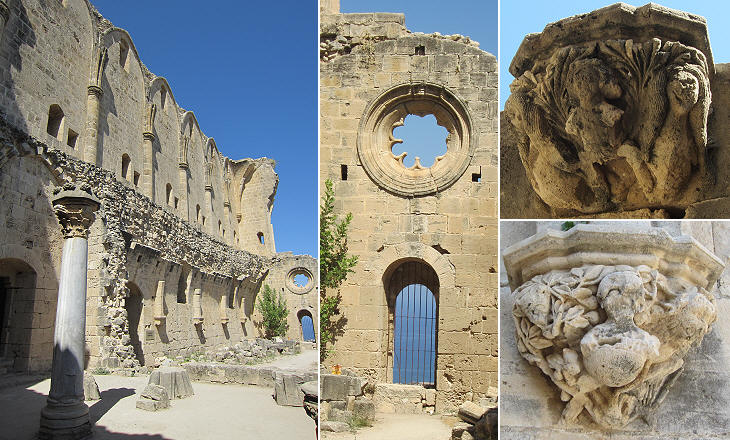 Large hall behind the cloister and details of its capitals; the upper floor housed a dormitory

The medieval buildings of Cyprus when vaulted in the European manner were never covered with rainproof roofs as in Europe. The vaults were covered on their outsides with "terrazzo" or concrete of small stones, pozzolana, and lime, in the same way as the small Byzantine churches of the natives. This economy in roofing accounts for the total disappearance of the greater number of the medieval monuments of Cyprus. To this must be added the fact that, although the construction of these edifices was evidently superintended by European masons, or "architects", the workmanship betrays the very great inferiority of the builders employed under such supervision. Bella Paise Abbey is not an exception in this respect.
In removing the debris of the ruined dormitory and chapter house in 1912, the central support of the vaulting in the latter, consisting of a marble column and capital, came to light. Jeffery The garden surrounding the Abbey seen from inside the cloister