You may wish to read an introduction to this section or to Persepolis first. 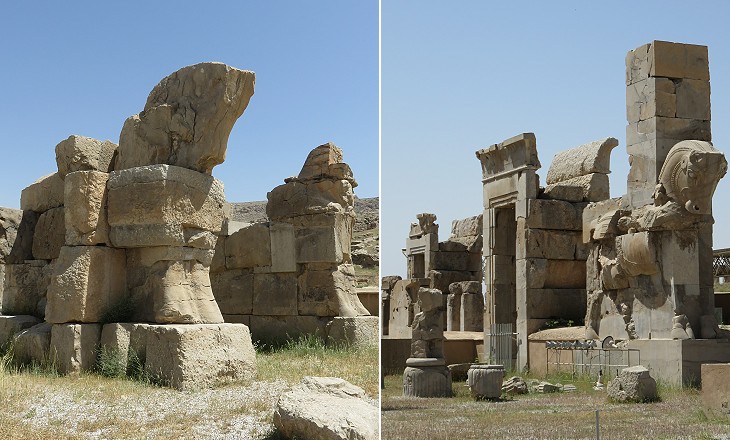 (left) Unfinished Gate built by Artaxerxes III, one of the last Achaemenid kings; (right) one of the entrances to the Palace of 100 Columns (Hall of the Throne)

Alexander the Great seized Persepolis in January 330 BC. Four months later the monumental part of the city was burned. Archaeologists have excavated a layer of ashes of up to ten feet. Historians disagree on the causes of the fire: accidental or ordered by Alexander as a revenge for not having been acknowledged as the new Achaemenid king after the killing of Darius III by one of his satraps. Others say he did it in retaliation for the burning of the Acropolis of Athens by Xerxes in 480 BC (you may wish to see a floor mosaic at Pompeii depicting a battle between Alexander and Darius III). 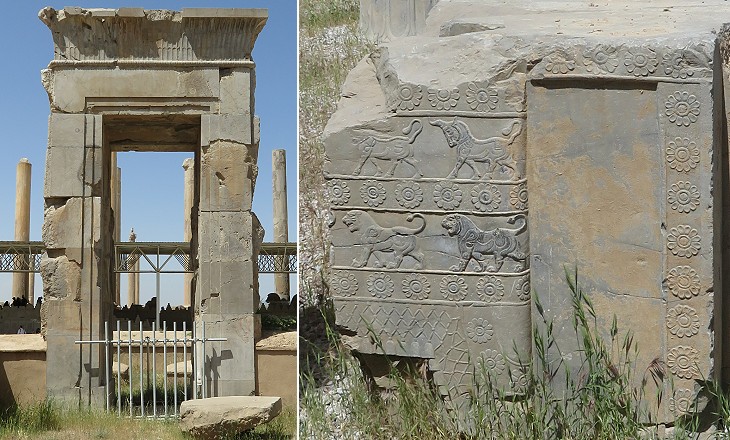 Palace of 100 Columns: (left) one of the entrances; (right) detail of a decorative relief

There are still things to be said about Persepolis. In its prime, when the walls were mud and the roofs wood, it may have looked rather shoddy - rather as it would look, in fact, if reconstructed at Hollywood. Today, at least, it is not shoddy. Only the stone has survived. Stone worked with such opulence and precision has great splendour, whatever one may think of the forms employed on it.
Robert Byron - The Road to Oxiana - 1937 - Macmillan & Co. (piece written in March 1934).

Examples of decoration of the entrances to the Palace of 100 Columns (left/centre) and to that built by Xerxes (right). You may wish to see two sketches of reliefs by Cornelis de Bruijn, a Dutch painter who visited Persepolis in 1704 (it opens in another window)

Above each doore is ingraven the Idea of a Majestique Monarch; his roabe is long, a Tiara or Mithre on his head, his hayre very long and curled in one hand he holds a globe in the other his scepter.
Sir Thomas Herbert - Some Yeares Travels Into Divers Parts of Asia and ... - 1638 (in Persia in 1626-1629)
Persepolis was neither the largest city of the empire, nor its major economic centre. The decoration of its palaces basically had only one purpose: the depiction of the ceremonies which took place there. It has some conventional features such as the king having a gigantic size, but otherwise it looks very accurate.
The king was portrayed with symbols of his power (a sceptre) and of his divine status (a fly-whisk and a parasol) which have survived until the present day. You may wish to see the use of parasols at an Eritrean celebration of Michaelmas and by the Popes who were followed by attendants with flabelli, large fly-whisks (until the 1960s). 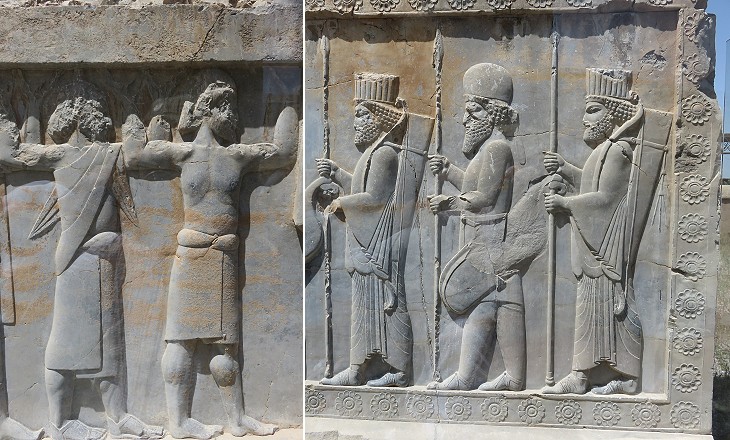 The decorations of the entrances to the palaces and of the platform supporting the Apadana convey the message that the power of the king rests on the shoulders of his satraps (the governors of the provinces) and is protected by his army. The soldiers are never portrayed in a fight, but always as if parading in front of their king.

Louvre Museum in Paris: brick relief at the Palace of Darius at Susa

The Achaemenid army greatly relied on archers. An anecdote reported by Herodotus says that when the Persians discharged their arrows at the Battle of Thermopylae, they obscured the light of the sun. The skill of the Achaemenid archers passed on to the Parthians and the Sassanids. 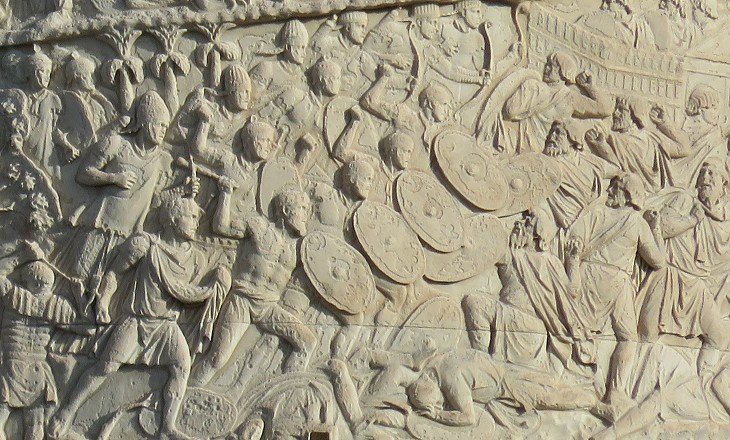 Relief on the column erected by Emperor Trajan to celebrate his victories. It shows a fight between Romans and Dacians. The Romans are helped by a German warrior with a club and by a group of archers. The latter came from Syria or other countries bordering on Persia, as the three palm trees behind them and their costumes indicate

Apollo and Artemis were very often portrayed by Greek sculptors with the bow they used to hunt. Eros threw arrows to make people fall in love. At war however the Greeks (and the Macedonians of Alexander the Great) were mainly equipped with spears, spikes and a short sword. Roman legionaries used javelins, a short sword and a dagger. Trajan's Column is a monument similar to the Apadana in the sense that it accurately depicts the Romans at war, as the Apadana depicts the Persians celebrating their king. 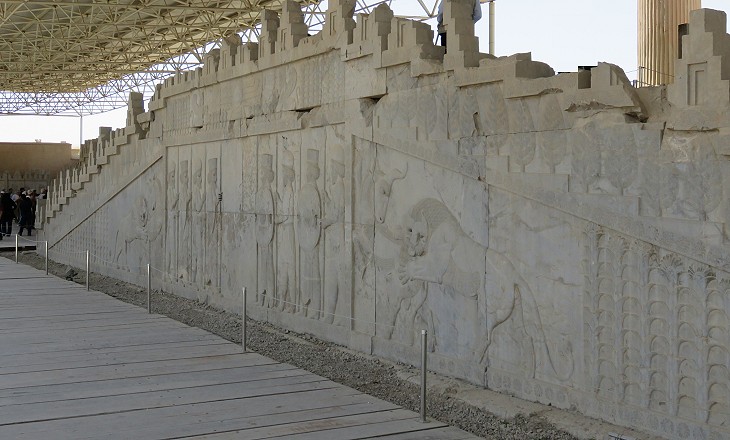 Each of these stones are most excellently ingraven with Images of Lyons, Gryffins, Tigres, and Bulls: and in other places (for the wals are durable) Battailes, Hecatombs, Triumphs, Olympic games, and the like, in very rare Scolpture and proportions. Herbert
The Apadana Staircase, similar to the Great Staircase, was designed to allow a solemn access to the audience hall. Its decoration, in addition to soldiers, included cypress trees and two large reliefs portraying a fight between a lion and a bull. This subject is depicted at many other places in the Apadana and other palaces. The prevalent opinion is that it had an astronomical significance, the lion representing the constellation Leo and the bull the constellation Taurus. They would indicate the spring equinox, a major festivity and the beginning of the new year in many ancient civilizations.
Cypress trees were planted near Zoroastrian temples. At that time Zoroastrianism was a well established religion, but it cannot be said with certainty that the Achaemenid kings were among its followers.

This is one of the plates, originally engraved from drawings by the French artist Guillaume-Joseph Grelot, who had accompanied Chardin on part of his second voyage, and re-engraved for later editions, which illustrate mainly buildings, architectural features, and city views. They are attractive and give a reasonably accurate impression of their subjects. More than a quarter of them are devoted to Isfahan and Persepolis. Apadana: reliefs portraying the Lydian delegation (left) and the Cilician or Assyrian one (right)

The largest panel of the Apadana staircase depicts a procession of people carrying gifts (pots, jewels, animals, but not weapons). Archaeologists have studied it extensively and have identified delegations from between 23 and 28 countries which were part of the Achaemenid Empire at the time of Darius.
Lydia was one of the westernmost provinces of the empire (see a page on Sardis, its former capital). Cilicia was a key province because of its location between Anatolia and Mesopotamia. 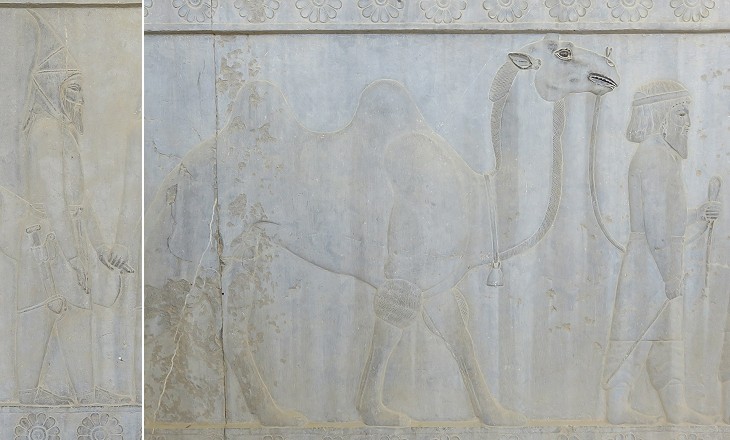 Apadana: reliefs portraying: (left) a member of the delegation from Scythia (a vast region spreading from today's Ukraine to Central Asia); (right) a camel from today's Afghanistan

The walls are of black shining marble; in many places so bright and jetty as we could easily view our reflex, no steel mirror conjuring with It. Herbert
The reliefs were carved on a stone of extreme hardness. They must have required an enormous amount of careful work, but by and large they have escaped the injury of time. They have a very unusual metal appearance; according to Robert Byron they are slick as an aluminium saucepan. The fluting of the Apadana columns suggests workmen from Ionia made them (see the Temple to Apollo at Didyma in Ionia), while their bases recall Egyptian patterns. The central hall had 36 columns and it was surrounded by three porticoes of 12 columns each. The beams placed on the columns and the roof were mainly made of cedars of Lebanon, a light weight wood. The beams and the roof were painted. 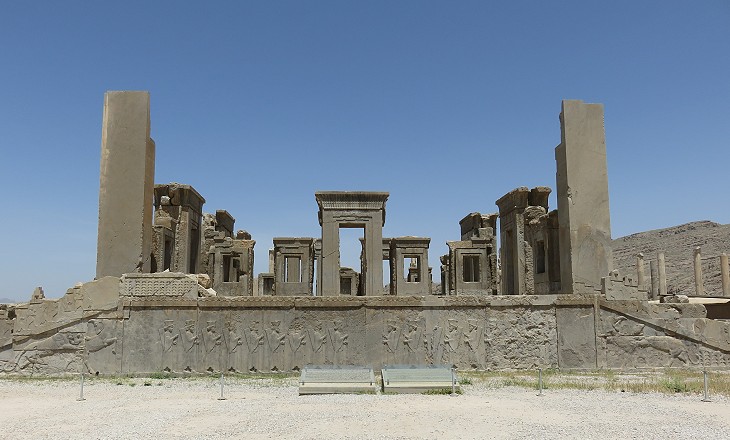 Tachara or Palace of Darius

The decoration of the staircase is very similar to that of the Apadana, but it has a long inscription in three languages at its centre in which Xerxes states that he has completed the building initiated by his father. 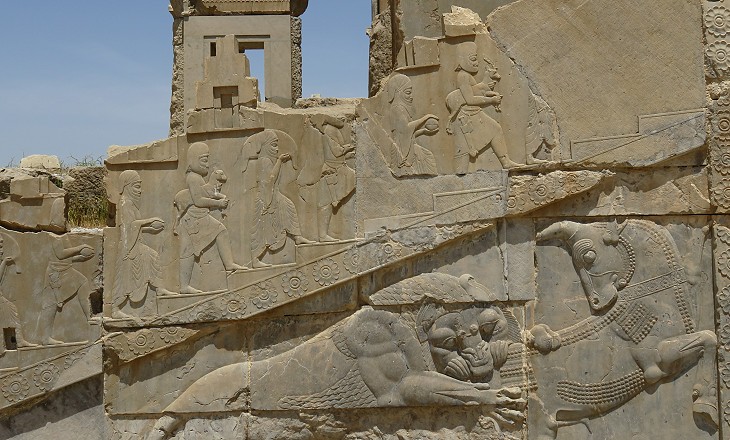 The image used as background for this page shows a relief portraying a member of the court of Darius the Great at the National Museum of Tehran.