If you came to this page directly, you might wish to read a page with an introduction to this section or a page on the main churches of Famagusta first. 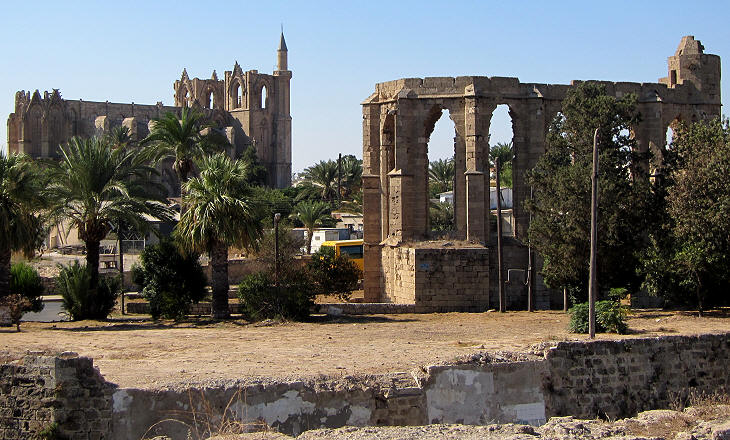 St. Nicholas' (left) and St. George's of the Latins (right)

Thus saith the Lord - In whom shall Cyprus trust,
With all her crimes, her luxury and pride?
In her lascivious loves will she confide,
her harlot Daughters, and her Queen of Lust?

The initial verses of this sonnet written by Benedetto dell'Uva, a Benedictine monk (translation found in The Poetical Register and Repository of Fugitive Poetry for 1804) on the eve of the 1571 Ottoman conquest of Famagusta shed some light on the profligacy of its inhabitants. Some travellers thought that the reason for the presence of so many churches was due to the desire of the town's wealthiest citizens to make up for their lascivious behaviour. 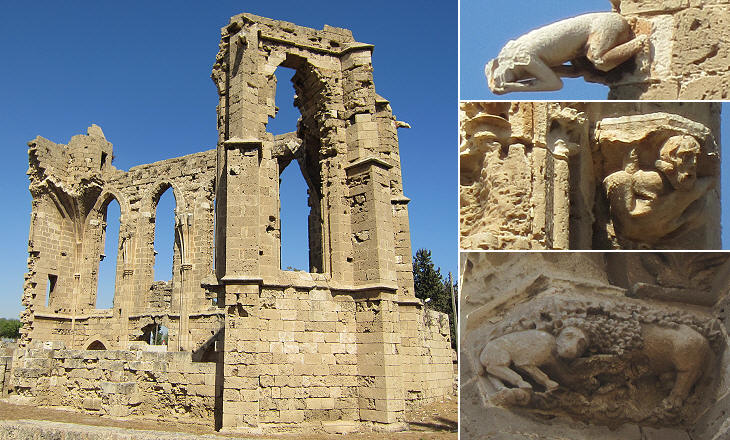 (left) St. George's of the Latins (most likely the church of the rich Genoese community); (right) reliefs and statues

A few fig, olive, and mulberry trees, are the only vegetation within the walls. The ruins have the same yellow hue as those of Athens. (..) Near the city is a village inhabited by Christians, who are not excluded from the city, but prefer living in the village of which, each house has its garden. This village contains about 100 low houses, mostly of mud, but some of stone.
William Turner - Journal of a Tour in the Levant - 1815. 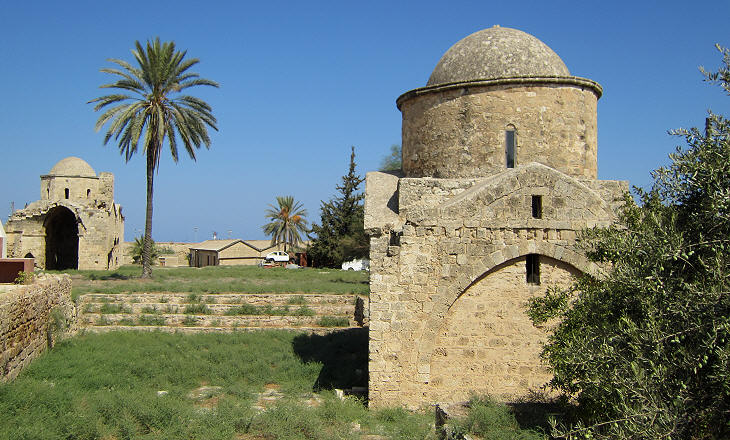 The remaining churches help in understanding how Famagusta was divided into quarters in its heyday. Communities from the Asian mainland lived in the north-western quarter; Latins i.e. communities from Italy and France resided in the north-eastern quarter and the Greeks in the southern part of the town. Their churches were a mixture of traditional Byzantine patterns and Gothic structures. 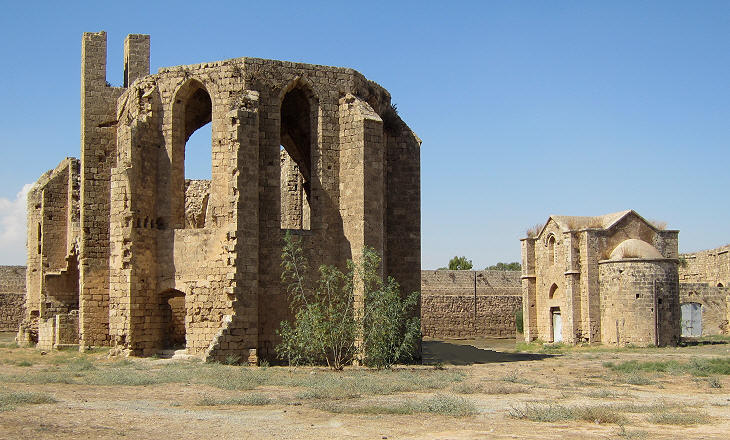 After the partition of Cyprus in 1974 Turkish authorities forbade access to many areas near the Venetian walls of Famagusta. Ruins of old buildings in this military zone were cleared away and today it is amazing to see old churches standing in a sort of urban desert and believe that in the past they were part of a lively neighbourhood.
The image used as background for this page shows the Armenian church seen through a gap in the wall of the Carmelite one. 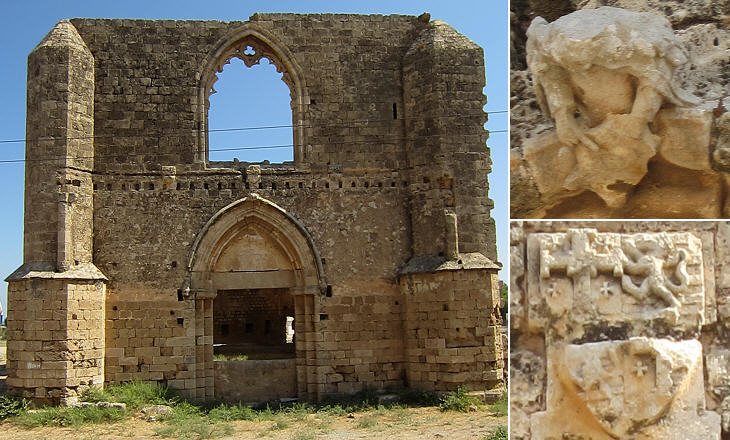 (left) Carmelite church at Martinengo Bastion; (right-above) a relief above the main portal; (right-below) coat of arms of the Lusignan Kings of Cyprus, the Holy Sepulchre cross indicates that they were Kings of Jerusalem too

The church of the Carmelites housed the tomb of St. Peter Thomas, a French Carmelite monk who was appointed Archbishop of Candia and Latin Patriarch of Constantinople by Pope Urban V. He promoted a sort of crusade against the Mamelukes and in 1365 he accompanied King Peter I of Cyprus in a campaign during which they briefly seized Alexandria. According to tradition he was killed by an arrow (and this explains why he is venerated as a martyr), but some sources indicate that he returned to Famagusta where he fell ill and died in January 1366 at the age of sixty.
He was canonized in 1609 at a time when feelings for the slaying of the Venetian commander of Famagusta were still running high and the Popes hoped that one day Cyprus would return into Christian hands. 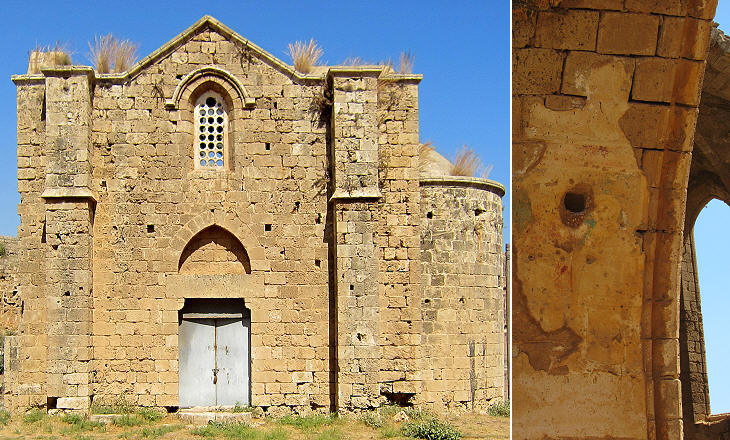 (left) Armenian Church; (right) interior of the Carmelite Church with fragments of frescoes

In 1341 a member of the Lusignan family became King of Lesser Armenia, a state founded in 1199 by Armenian knights in the ancient region of Cilicia. A large Armenian community lived at Famagusta; they belonged to a church having at its head the Patriarch of Sis, the capital of Lesser Armenia. 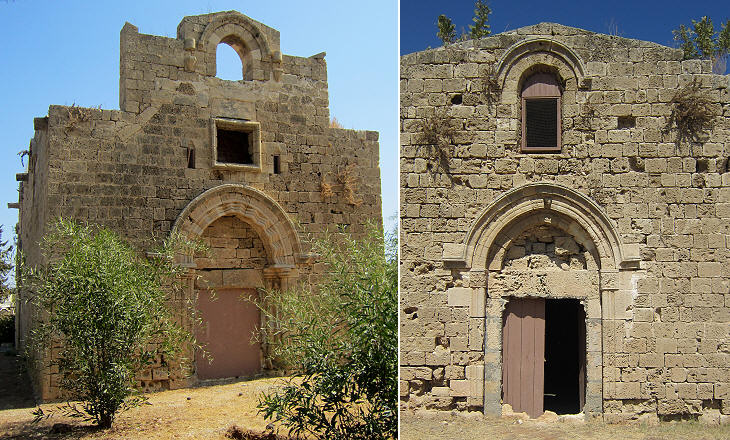 This tiny church is among the few which were turned into mosques. It has decorated portals on three sides. Its original dedication is unknown, however because the neighbourhood was mainly inhabited by communities coming from the Asian mainland (such as the Armenians) it is believed it belonged to an Eastern Church such as the Syriac Orthodox Church (aka Jacobite because it employs the liturgy of St. James the Apostle), whose members still live in today's Syria and Lebanon. 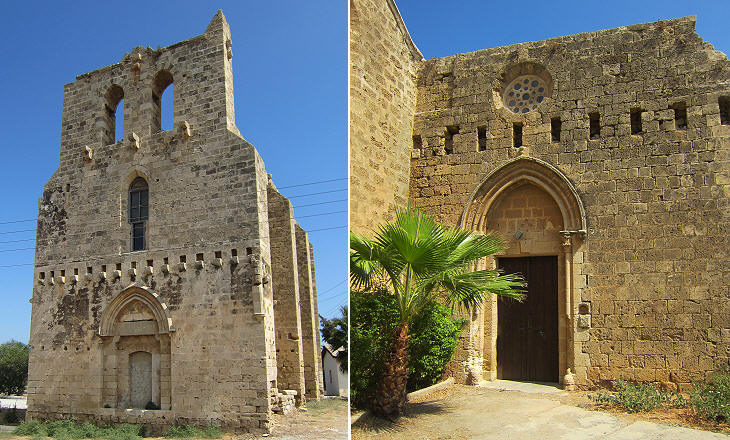 St. Anne's resembles the Carmelite church and this supports the hypothesis that it was a Catholic church included in a Benedictine nunnery which is mentioned by Venetian chronicles. Because of its location however the building could have been the church of the Maronites.
Syriac inscriptions have led to identifying a church with the Nestorian community, which is recorded as being one of the richest ones. The term "Nestorian" can apply to a plurality of Eastern Churches which rejected the outcome of the 431 First Council of Ephesus which condemned the views of Nestorius, Patriarch of Constantinople. 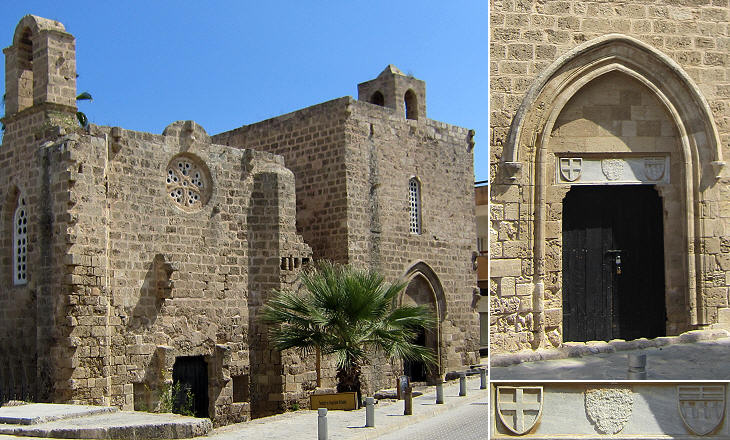 The two best known and powerful military orders associated with the Crusades had their chapels side by side; they were deeply involved in the defence of the Latin States of the Levant and they held a large number of castles there.
The Templars, after having lost Arwad, their last stronghold in Syria, in 1302, were charged with a long series of crimes by Pope Clement V; the Order was eventually dissolved and its assets were confiscated.
The Hospitallers had better luck; after losing Acre in 1291 they escaped to Cyprus and eventually in 1309 they took Rhodes from the Byzantines and they became known as the Knights of Rhodes.
The traditional identification of the two churches with the Orders is questioned today by those who believe these buildings were private chapels of some rich Genoese merchants; this hypothesis is supported by the "horizontal" cross on the upper section of one of the coats of arms (see the coat of arms of Pope Innocent VIII of the Cybo Genoese family - it opens in a separate window). 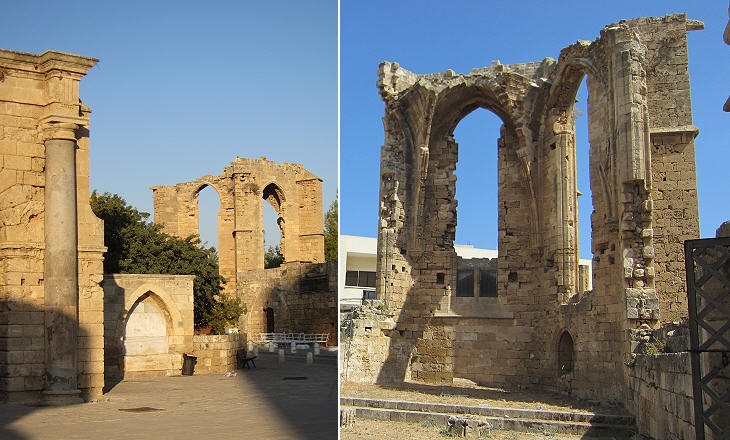 The Franciscans had a large monastery at the centre of the town. The Order was established on the island at a very early stage in memory of the visit made by St. Francis of Assisi on his way to the Holy Land. In 1601 materials were taken from the church to build an adjoining hammam. 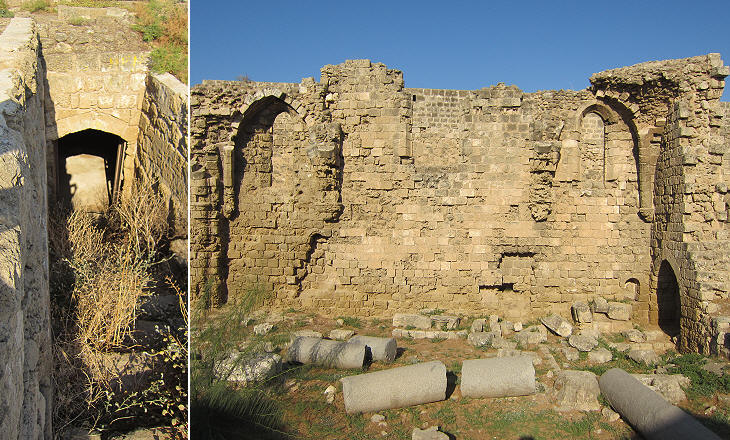 Famagusta was said to have a church for each day of the year. Although this was clearly an exaggeration, by wandering around one sees the ruins of many churches which have not been identified yet (and maybe never they will be as they are completely neglected and are bound to disappear). 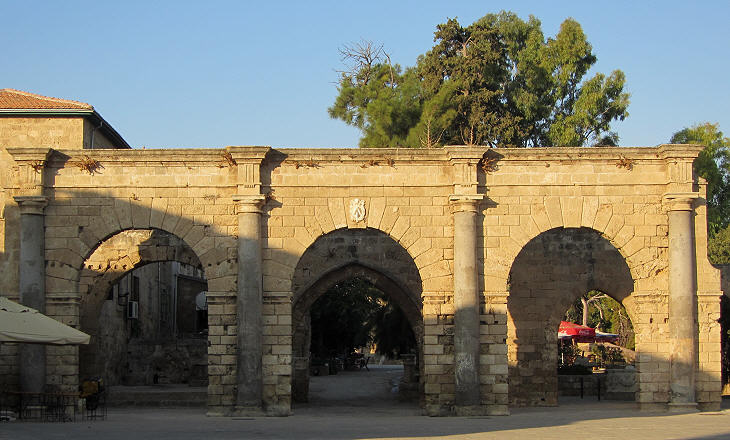 (November 1738) The antient piazza seems to have been very beautiful; the house of the governor with a portico before it, is on one side, and the western front of the church of saint Sophia on the other. (..) Near the north west corner of the church there are two pillars, which probably had on them the Venetian ensigns; near these there is a coffin of white marble adorned with lyons heads, and festoons held by cupids.
Richard Pococke - A Description of the East and Some Other Countries - 1745
The Ducal palace was near Sta. Sophia, and is now completely crumbled to ruins. Under it are some subterraneous chambers, full of cannon-shot. Turner
The Venetians moved the capital of Cyprus from Nicosia to Famagusta and built a Renaissance palace opposite the Cathedral. It was preceded by a portico decorated with granite columns coming from Salamis an ancient town four miles north of Famagusta. 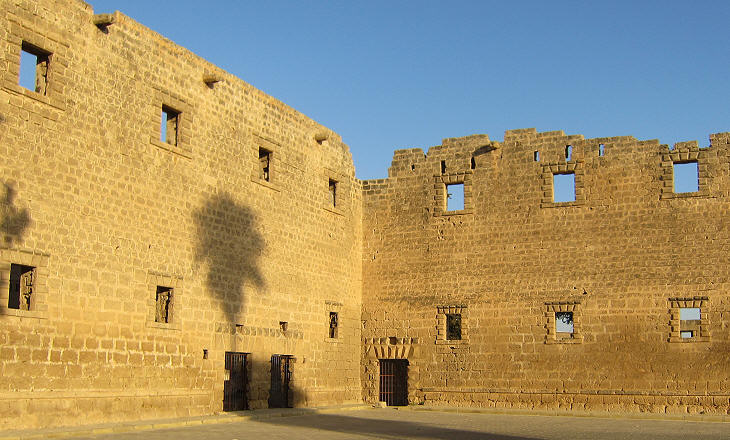 Palazzo del Provveditore was not just the residence of the Venetian governor of Cyprus, but it included a series of buildings which housed tribunals and administrative offices. The bugnato frames of doors and windows are rather unusual in Venetian architecture, but they were employed by Michele Sanmicheli, a Renaissance military architect, in the design of Forte S. Andrea in Venice. 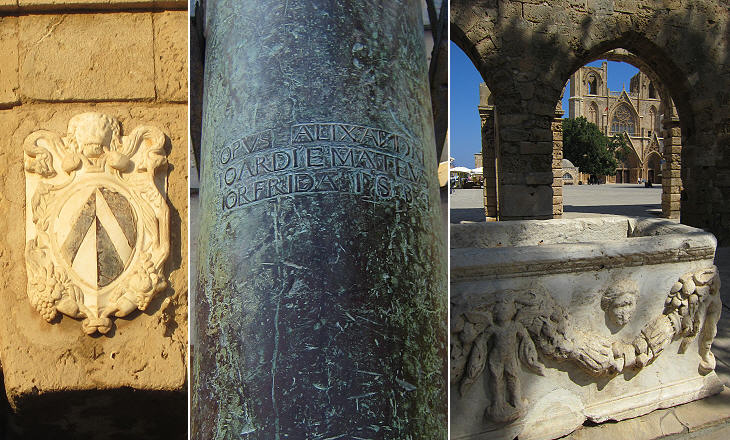 (left) Coat of arms of Giovanni Renier, governor of the island in 1552: (centre) detail of a 1534 Genoese gun with the name of Alessandro Gioardi, the manufacturer; (right) an ancient sarcophagus and St. Nicholas' in the background (through the arches of the palace)

The conquest of Cyprus and in particular of Famagusta cost the Sultan a fortune and entailed the loss of many valiant officers and soldiers, yet the Ottoman interest for the island and the town seems to have vanished soon after the conquest. Venetian buildings were not restored and they were left to crumble until an earthquake in 1734 caused the collapse of many walls. 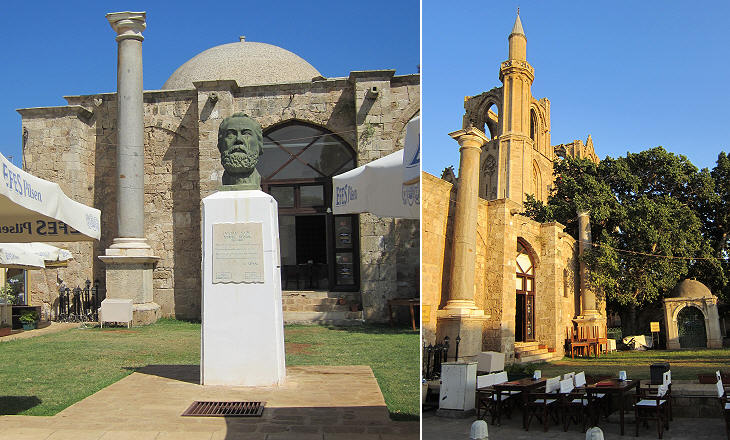 (left) Medrese adjoining the cathedral and monument to Namik Kemal, a XIXth century Turkish poet who was imprisoned in Famagusta by the Sultan; (right) another view of the medrese (today a coffee shop)

A medrese (Koranic school) built near the cathedral is one of the very few monuments left by the Ottomans at Famagusta. It is flanked by two granite columns which supported statues of the Winged Lion, the symbol of Venice. In August 1571 Marcantonio Bragadin, Venetian governor of the island, was tied to the right column and he was flayed alive in breach of the agreement signed before surrendering the town. 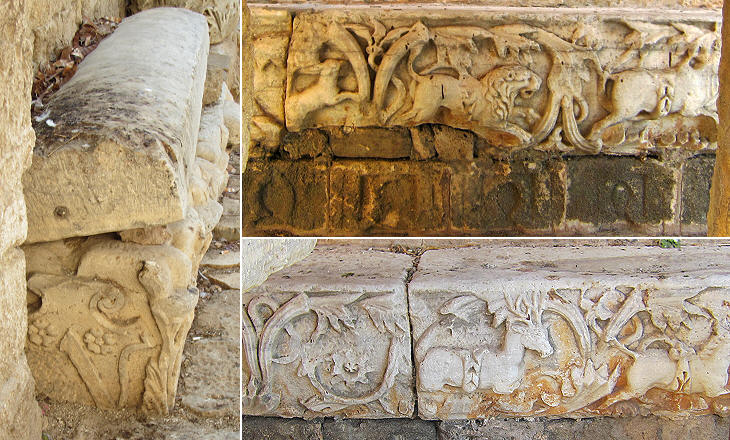 Move to other pages of this section:
Famagusta - The Walls
Famagusta - Main Churches
Nicosia - Walls and Houses
Nicosia - Churches and Mosques
Cirenes (Kyrenia)
An Excursion to Bellapais
Larnaca