If you came to this page directly, you might wish to read a page with an introduction to this section or a page on the walls and houses of Nicosia first. 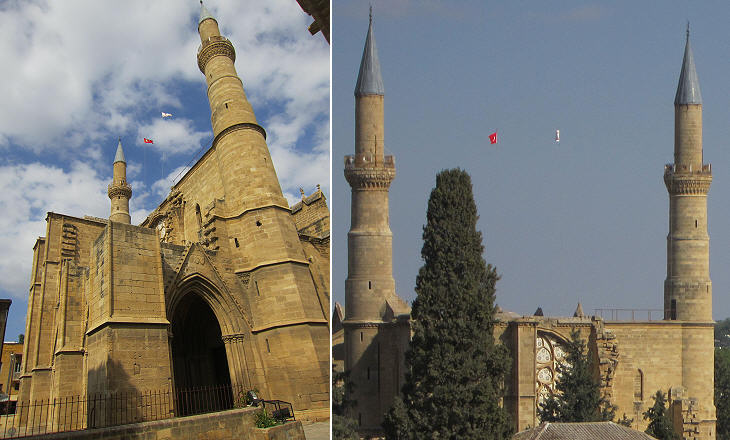 In 1208, soon after taking control of Cyprus, the Lusignan kings started building a new cathedral in Nicosia; it took them more than a century to complete it (1328); with reference to that of Constantinople they dedicated it to Hagia Sophia, but the two buildings could not be more different, as that of Nicosia was designed in pure French Gothic style. It was converted into a mosque with the addition of two minarets and dedicated to Sultan Selim II, so it was called Selimiye Camii, a name which in turn recalls the mosque by the same name at Edirne, the masterpiece of Mimar Sinan, the great Ottoman architect. 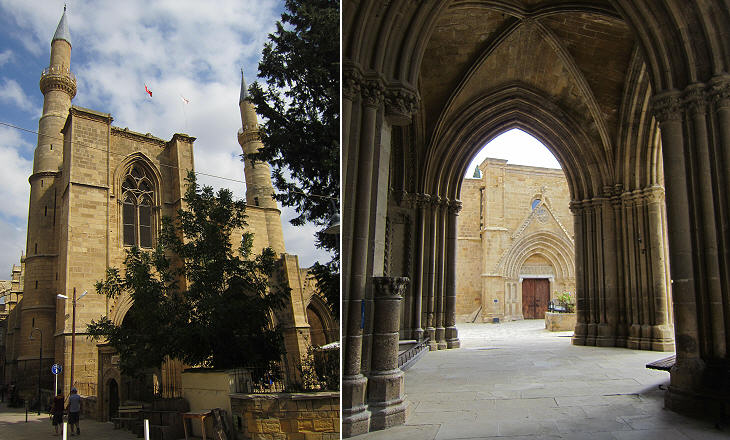 Cathedral: (left) north-western tower, the last addition; (right) the porch and in the background the main portal of St. Nicholas'

The construction of such an imposing cathedral was perhaps due to the fact that the Kings of Cyprus were Kings of Jerusalem as well and they felt they were obliged to show their devotion to the Catholic Church. Relations with the Papal court in Rome and Avignon were very strict and on some occasions the popes were asked to judge on dynastic quarrels.
Some cadets of the Lusignan family entered the ecclesiastical career. In 1426 Hugh of Lusignan was appointed cardinal by Pope Martin V and in 1447 Lancelot de Lusignan was appointed cardinal by Antipope Felix V. 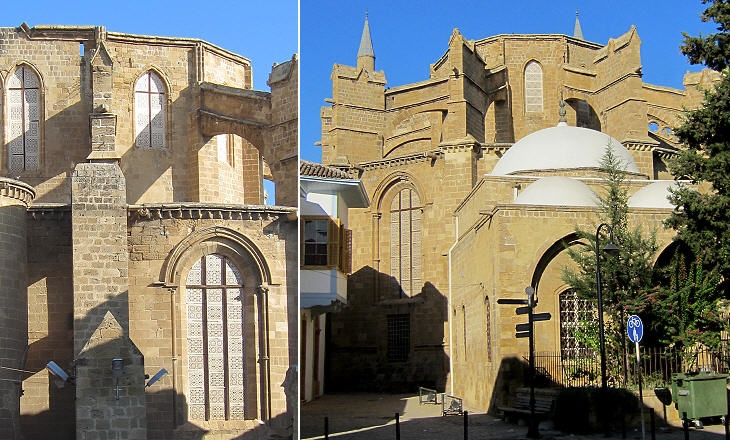 Cathedral: views of the apse

(November 1738) The cathedral church, now a mosque, is a large building, and exceeds that of Famagusta in the front, as much as it falls short of it in other respects.
Richard Pococke - A Description of the East and Some Other Countries - 1745
The church of Sta. Sophia, (now converted into a mosque,) stands about the centre of the city. It is built in the Gothick style, (corrupted by the same triangular ornaments as I observed in that of Famagosto,) in an oblong form, with a pentagonal projection at the end opposite the entrance, for the reception of the altar. It is already much ruined, and the Turks have broken the wall in three or four places, to make doors. The interior is laid out in three aisles, divided by clumsy white-washed Corinthian columns. (..) On the two belfries of Sta. Sophia, the Turks have built two high and handsome minarets.
William Turner - Journal of a Tour in the Levant - 1815.
Gothic cathedrals were developed in European countries which were not subject to earthquakes. Their design proved to be unfit to withstand the earthquakes which often struck Cyprus. Hagia Sophia suffered major damage in 1347, 1373 and 1491. Huge buttresses were built to improve the stability of the cathedral and in particular of its rear section. 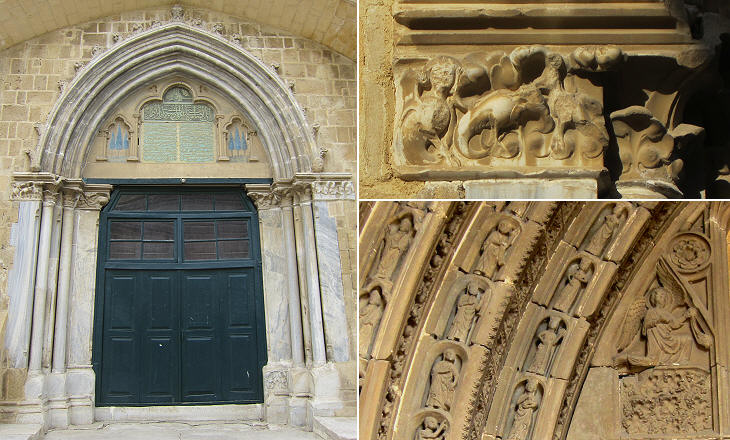 Unlike other great French cathedrals, that of Nicosia has an elaborate rear portal giving access to the ambulatory. The building has a west-east orientation so this portal was oriented towards Jerusalem (and Famagusta). It is possible that at the end of the coronation ceremony, the new King of Cyprus left from this exit as an indication that in the following days he would proceed to the Cathedral of Famagusta to be crowned King of Jerusalem.
The decoration of the portals was mainly based on floral motifs; some of the reliefs depicting human beings or animals were smashed after the building was turned into a mosque, but others were just covered with plaster (by and large the Ottomans were not possessed by iconoclast fury). 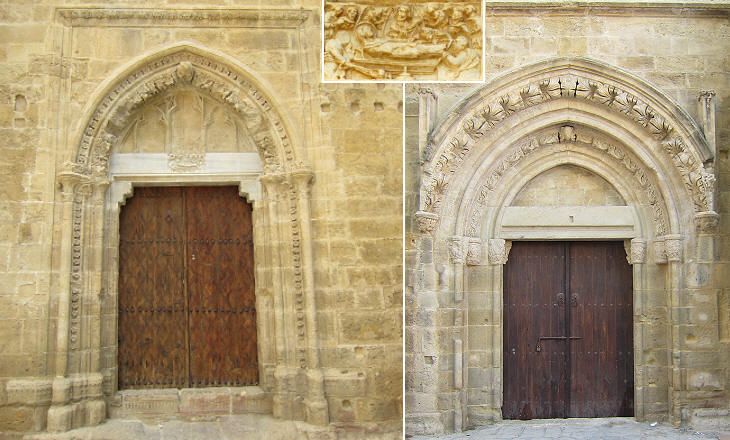 Two portals of St. Nicholas'; (inset) relief portraying the Dormition of the Theotokos (the Virgin Mary), a frequent subject in Greek Orthodox churches

St. Nicholas' stands to the left of the Cathedral with its three portals having a different design. The Venetians assigned St. Nicholas' to the Greek Orthodox Archbishop of Cyprus in an attempt to establish better relations with the Greek community; the Ottomans turned the building into a bedesten (covered market). 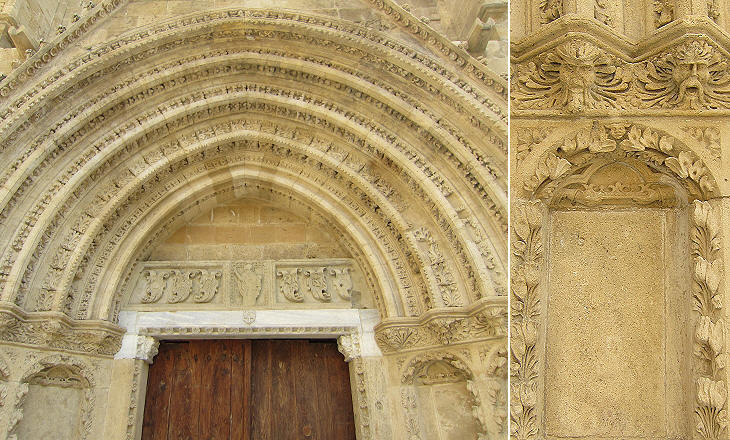 The Greek Orthodox Archbishop of Cyprus enjoyed a particular status as William Turner learnt from the Archbishop himself:
The Archbishop received us very hospitably; he is the primate of the island and is so respected by the Greeks that he shares the supreme power with the Aga (the Ottoman governor).(..) He told me that he was entirely independent of all the four patriarchs (of Constantinople, Rome, Antioch and Alexandria) for the following cause. In the time of the latter Byzantine Emperors of Constantinople the church there having no authentic copy of the Gospel of Saint Matthew issued orders for the seeking of one throughout the empire. The priest of a convent near Famagosto dreamed that if he dug under his church he should find it. Next day he obeyed the injunctions of the Angel who had appeared to him in a vision and found the tomb of Saint Barnabas with the Gospel of Saint Matthew laid on the bosom of the dead saint. The Archbishop wrote this to Constantinople whence the royal galleys were immediately sent on board of which he carried the treasure to the capital and in return for his present he was made independent and presented with a red vest which he has still the prerogative of wearing and allowed the privilege of writing with red ink which he has ever since continued. 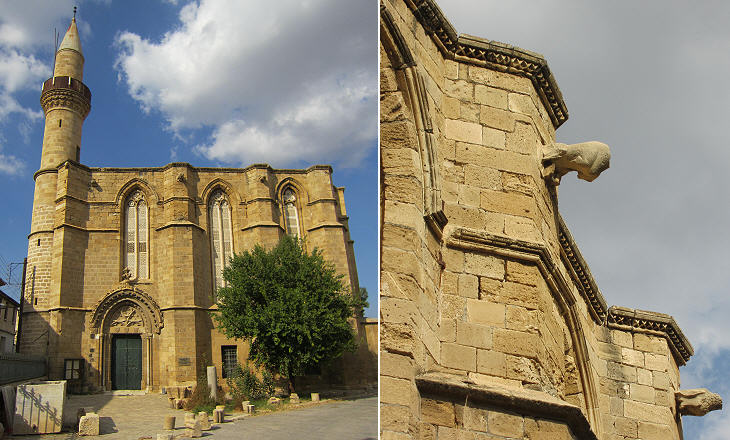 A tombstone dated 1373 is supposed to be associated with the foundation of this church and of a nearby convent. The reference to St. Catherine is based on a list of churches which were converted into mosques after 1570, but we do not know much else about the history of the church and about the monks or nuns who lived there. The addition of a typically Ottoman lancet minaret, although incongruous with the style of the church, is not unpleasant to see.
The tracery of the portals is among the finest examples one can see on Cyprus and it suggests the presence of some German or French mason during the designing of the church.

St. Catherine's: (left) west side portal (a detail of which can be seen in the image used as background for this page); (right) detail of the front portal

After the Ottoman conquest all the Catholic churches of Nicosia were either pulled down or converted into buildings having other uses. All the Catholics who were not killed during the seizure of the town were sold as slaves.
The day after the capture of the city, the prisoners and the plunder were put up for sale. The good-looking young men and maidens fetched good prices; the others, except those suitable for the galleys, went for almost nothing. (..) Mustafa, the Ottoman commander, reserved, besides ordinary booty, some hundreds of captives, the flower of young men and maidens from Nicosia as presents for the Sultan.
George Hill - A History of Cyprus 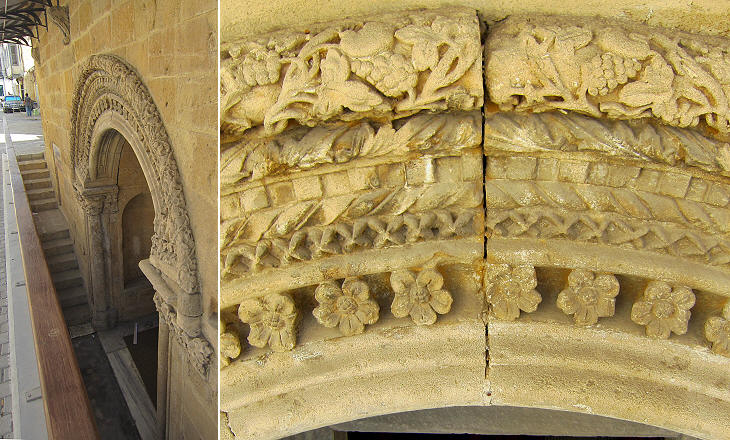 This building has been identified by some historians with St. George's of the Latins. It is now called Buyuk (Great) Hamam, but in the XIXth century it was a bath establishment reserved for women. Its richly ornamented portal is remarkable for an interlaced grape and leaf motif. Today the portal is buried to a depth of about six feet, most likely because of the decay of the surrounding buildings. 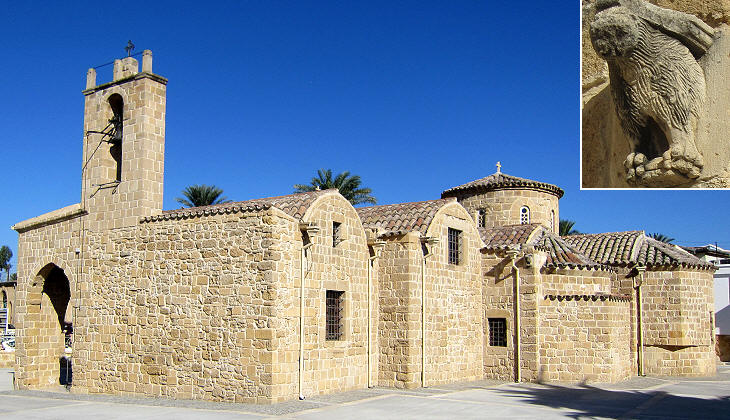 Panagia Chrysaliniotissia (Our Lady of the Golden Flax, because of an icon found in a flax field); (inset) a gargoyle

The Greeks have several new built churches in the city, and the Latin fathers of the convent of the Holy Sepulchre at Jerusalem have a small convent. Though there are very few Armenians, yet they have possession of an antient church here. Pococke
The Greeks were allowed to retain some churches, but only in the peripheral areas of the town and only those which were modest in size. The church is a building of different periods of reconstruction, and evidently replaces a medieval structure; at one time the dome was rebuilt on a much smaller scale, perhaps to make it less visible. Additional separate chapels were built to the side of the church, a very common Byzantine practice. Panagia Chrysaliniotissia: details of its decoration

The church was built by Queen Helena in 1450; she was the daughter of the Despot of Mistras and she married King John II of Cyprus in 1442 during the period of the short-lived reunion of the Catholic and Orthodox Churches which was agreed in 1439 at the Council of Florence.
In the angle formed by the south side of the church and its prolongation, there is a portal which makes a very picturesque effect. Reliefs and frames which probably came from earlier buildings were utilized to embellish the window at the side of the portal.

There was also a church here dedicated to the holy cross, and another of the Augustinians, which are now mosques. Pococke
Other churches and mosques retain traces of the past. The southern doorway of Agios Tripiotis, an XVIIIth century church, has a lintel with a relief representing a human figure with its lower extremities turned into floriated scrolls which it grasps with its hands, at the sides are two lions facing each other. Another doorway has a lintel decorated with a coat of arms similar to another one which was visible above the entrance of an old house until the late XIXth century.
An Augustinian church near the southern walls was repeatedly damaged during the siege of Nicosia. Some features of the original building survive in the mosque which was built after 1570 and dedicated to Omar, the second Caliph (634-644), who according to tradition visited Nicosia on his way to Egypt from Damascus. Not all the mosques of Nicosia were modified churches. In the XVIIIth century a typical Ottoman mosque was dedicated to Arab Ahmet, one of the Ottoman commanders in 1570.
Tahtakale is a corruption of Taht-el-Kale, meaning the lower part of the fortress, i.e. Famagusta Gate (see page one). The mosque was built in 1826 and it replaced a previous mosque.
A small mosque was built on the Costanza bastion and it was dedicated to the Ottoman bayraktar (flag bearer) who first scaled the walls.

Move to other pages of this section:
Famagusta - The Walls
Famagusta - Main Churches
Famagusta - Other Monuments
Nicosia - Walls and Houses
Cirenes (Kyrenia)
An Excursion to Bellapais
Larnaca