- Subiaco: a Walk to S. Scolastica
(detail of a fresco at S. Onofrio)

In July 1857 Ferdinand Gregorovius, a German historian best known for his studies on medieval Rome, visited Subiaco to look at some documents in the library of the Benedictine monastery of S. Scolastica. In the following year a German paper published Subiaco das älteste Benediktinerkloster des Abendlandes, a short account describing this monastery and that of S. Benedetto (aka Sacro Speco), which is located nearby. Gregorovius provided his readers with a detailed historical background of the two monasteries. 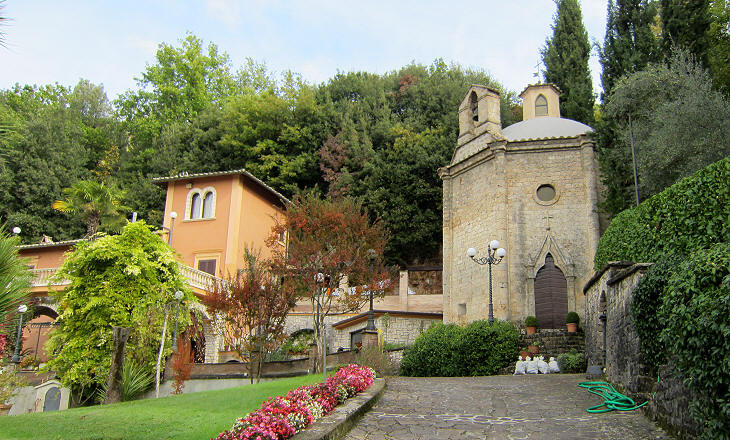 S. Scolastica is within walking distance (2 miles) of Subiaco and along the road there are several chapels which contribute to preparing the traveller for the visit of the monastery. S. Maria della Febbre (Fever) is an elegant Renaissance building which is now part of a private property; its hexagonal shape is typical of small churches built to celebrate cases of miraculous recovery from sickness; they are more frequently named S. Maria della Salute (Health). 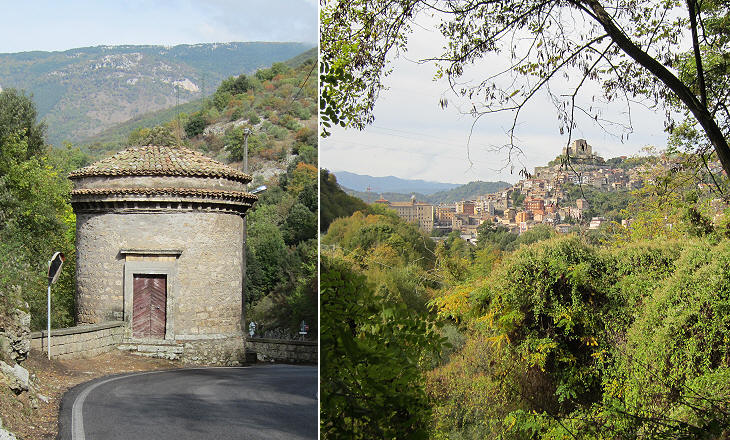 (left) Cappella di S. Mauro; (right) a view of Subiaco and of the Aniene River gorge

After S. Maria della Febbre the road starts to rise along the eastern side of a gorge; one can hear the murmur of the Aniene River, but not see it because of the rich vegetation; by looking backwards one can see Subiaco with all the houses grouped around the castle. The road replaces an ancient path which ran inside the grounds of the villa built by Emperor Nero.
St. Maurus was one of the first disciples of St. Benedict and he is known for having rescued another monk who had fallen into a pond. 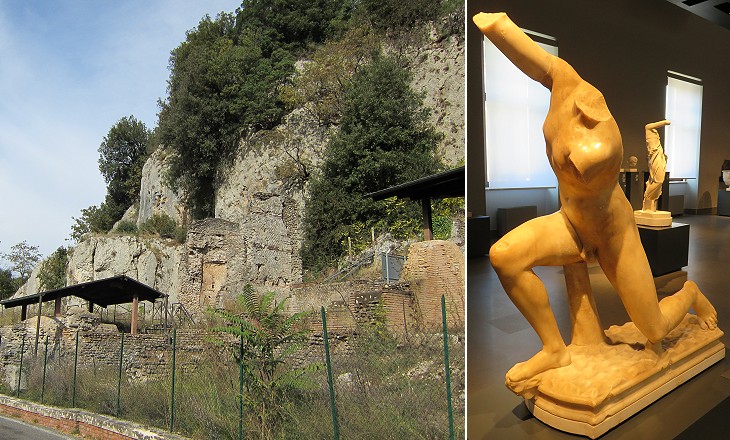 Ruins of Nero's villa can be seen along the road, but they fail to convey a proper idea of its size and appearance; the buildings were spread over a vast area which exceeded that of Villa Adriana. The water of the Aniene River was exploited to create artificial waterfalls, fountains and the three lakes after which Subiaco (Sublaqueum) is named. According to Pliny, Nero, who was born in a villa by the sea in sunny Anzio, decided to build a villa in a rather cold region because Charmis, a doctor from today's Marseille, theorized the advantages of taking cold baths. Nero however left his new villa and never returned there after a lightning strike hit a building where he was staying. 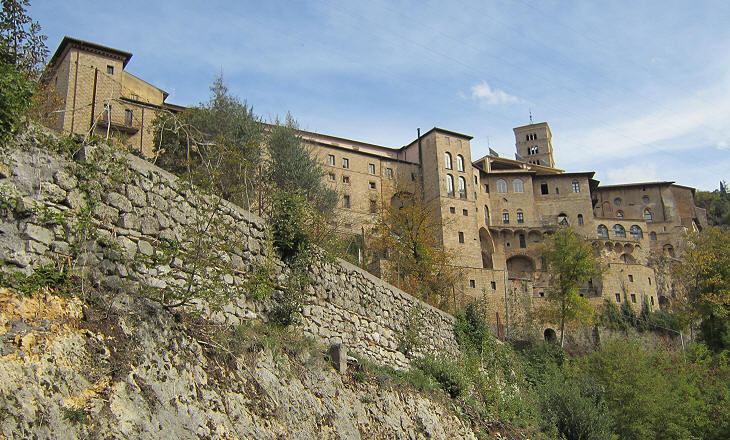 S. Scolastica seen from the road from Subiaco

There are two Monasteries at Subiaco, both under the same Abbot and the same ecclesiastical jurisdiction. The lower one bears the name of Santa Scolastica; the higher one is called the Sacro Speco, or sacred grotto. Both lie high up above the town, on ledges of the precipitous declivities of the mountain, and on the right bank of the Anio. The first, and oldest, is a fanciful and picturesque pile of buildings, above which still rises Abbot Humbert's square tower. Its mixed Gothic and Romanesque architecture, as displayed more especially in its windows and niches, proves it to have been built at different periods; yet but few remains of the oldest period now survive, and these are chiefly to be seen in the courts or quadrangles, for the Abbey has been frequently renewed, and the present church is a building of the last century.
Gregorovius - translation by Dorothea Roberts
At a turn of the road S. Scolastica suddenly appears on the edge of a ravine; notwithstanding the bell tower it does not call to mind a site of peace, but rather a fortress. The oldest part of the monastery is that near the bell tower. 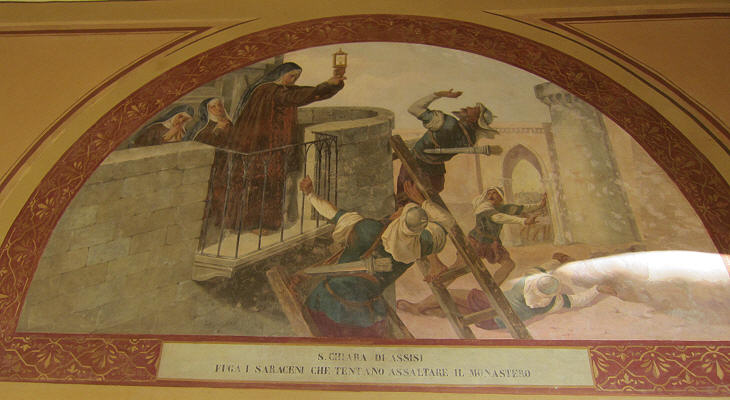 Fresco in the cloister of S. Francesco at Subiaco portraying St. Clare of Assisi repelling the Saracens of Emperor Frederick II at S. Damiano

S. Scolastica is the only one of the twelve monasteries which were founded by St. Benedict which was rebuilt after having been sacked by the Saracens in the IXth century; the Saracens had a permanent settlement south of Terracina and from there they made raids into the interior of the peninsula. Saracinesco, a small town near Subiaco, was most likely founded by Saracens; after the Norman conquest of Sicily in the XIth century many Muslims were relocated to southern Italy; they were known for being skilled archers and they fought for Emperor Frederick II. 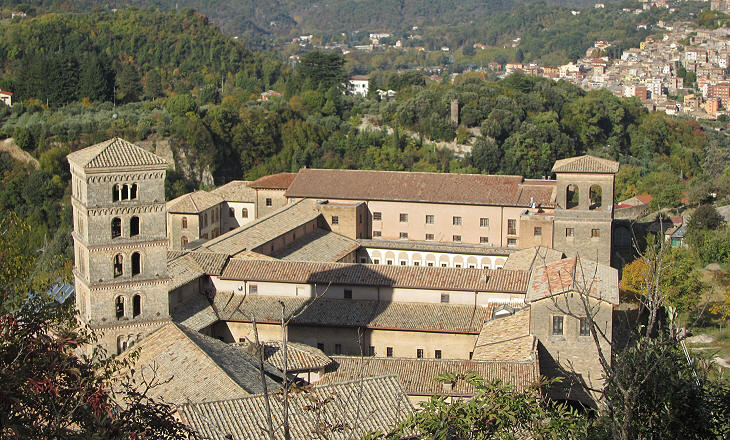 S. Scolastica seen from the road to S. Benedetto

The Monastery is roomy, with many corridors, cells, reception halls, and rooms for divers purposes, some of them quite new. (..) With a longing eye did I survey the library, with all its hidden-away archives concerning this ancient Benedictine Abbey. Those neatly arranged shelves contain priceless treasures in their records of the Latium of the Middle Ages. A few are open and accessible, many quite inaccessible. Gregorovius
In origin S. Scolastica was dedicated to St. Sylvester, who was pope at the time of Emperor Constantine. Later on the monastery was dedicated to Benedict and Scholastica, his twin sister; in the XIth century the abbots built a detached section of the monastery on Sacro Speco, the site where Benedict lived as a hermit; this section became known as S. Benedetto whereas the main monastery was called S. Scolastica.
The monastery is a complex of buildings which includes three cloisters, a church, a hostel for pilgrims and a library. Because of its long history S. Scolastica is a conglomeration of very different styles; the tall Romanesque bell tower was built in the XIth century and it replaced a previous tower; the church was built in the Xth century, but it was redesigned in Gothic style in the XIVth century. In 1769 the interior was entirely renovated by Giacomo Quarenghi, an architect best known for the many palaces he designed at St. Petersburg. Quarenghi was an admirer of Andrea Palladio and he spent several years in Rome studying the ancient buildings: the decoration of the niche of the apse is reminiscent of that of Tempio di Venere e Roma. (left) Cosmati cloister; (right) a column with an elaborate decoration which includes a devil's face which is shown in the background of this page

Turning out of the church, you enter a curious old cloister, its four sides enclosing a fountain. This resembles some of those old Roman cloisters whose circular arches are supported by double columns. It is of the early thirteenth century, a monument alike of the great Abbot Lando and the famous Cosma family, who decorated Rome with so many beautiful mosaics and pavements. (..) These worthy maestri were more successful in their monuments and tabernacles than in this particular erection, which has none of the beautiful proportions of the cloisters of St. Paul's Without the Walls, in Rome. The columns (two twisted ones between two plain ones) are inartistic and rude, their capitals faulty, resembling wooden beams, and decorated neither by mosaic work nor by sculpture. Gregorovius
When Gregorovius saw the oldest cloister of S. Scolastica he was rather disappointed; three generations of the Cosma family worked at the construction of the cloister; the overall design is elegant, but the decoration with the exception of a few columns is not elaborate. 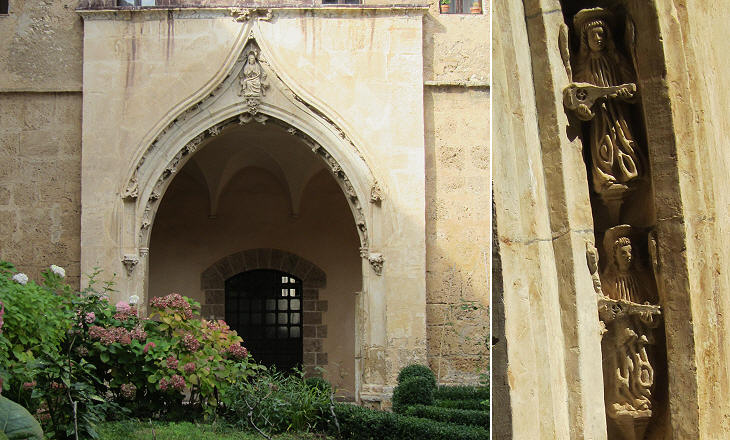 We enter a little intermediate court: (..) the principal doorway is remarkable for containing a specimen of Gothic architecture - is a great arch, decorated with multitudes of small figures and scrolls. (..) To Torquemada, its first Cardinal-Abbot, Subiaco owes the glory of being able to call itself the first place outside Germany from which printed books were issued from a printing press, before such a press was set up in Rome itself - a press was afterwards established there in the Massimo Palace - the printers Arnold Pannartz and Conrad Schweinheym, had been hospitably received by the monks of Subiaco, and it was on the 30th of October 1465 that they accomplished the printing of the Institutions of Lactantius. In 1467 they completed the work by St. Augustine called De Civitate Dei. (..) These works are still preserved in the library of the Monastery of Santa Scolastica at Subiaco. Gregorovius
In 1362 Abbot Bartholomew III, who was appointed at the end of a period of turmoil, invited foreign monks to settle at S. Scolastica; many of them were Germans, and for more than a century the majority of the monks were foreigners; this had an influence on the style of the second cloister where a large portal was designed following Gothic patterns. 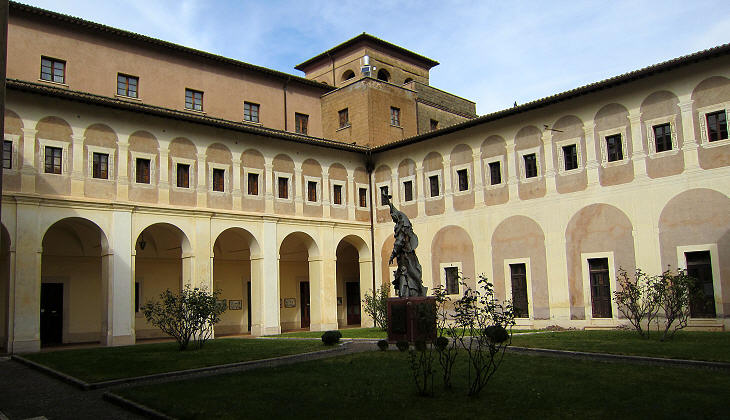 Move to Sacro Speco (S. Benedetto) or return to Subiaco or see the monasteries in the 1905 paintings by Alberto Pisa.