View of the countryside around the Abbey of Fossanova

Grand Tour travellers failed to notice the Abbey of Fossanova, although when travelling from Rome to Naples, they passed very near it. Both Goethe and Dickens made some references to Terracina, but not a word on Fossanova which is on the road to that town.
Interest in medieval monuments around Rome rose after Ferdinand Gregorovius published the History of the City of Rome in the Middle Ages (8 vol.) in 1872.
In 1875 Augustus C. Hare wrote in Days near Rome: Three miles north (of Priverno) is the famous monastery of Fossanuova, which was founded by Benedictines, and existed in the beginning of the ninth century. He most likely never went there because Fossanova in fact is situated to the south of Priverno. 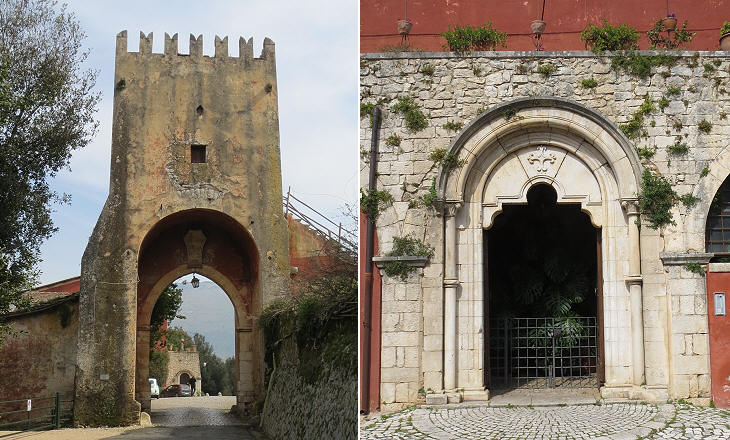 (left) Gate; (right) portal of one of the ancillary buildings near the entrance

The Benedictine abbey was most likely destroyed by the Saracens during one of their many raids on the Italian shores. In the XIIth century the Cistercians rebuilt it and surrounded it with walls. In addition they dug a deep ditch (Fossanova means new ditch) which had a dual purpose; it drained the excess water of the marshy area around the abbey and it served as a defence. 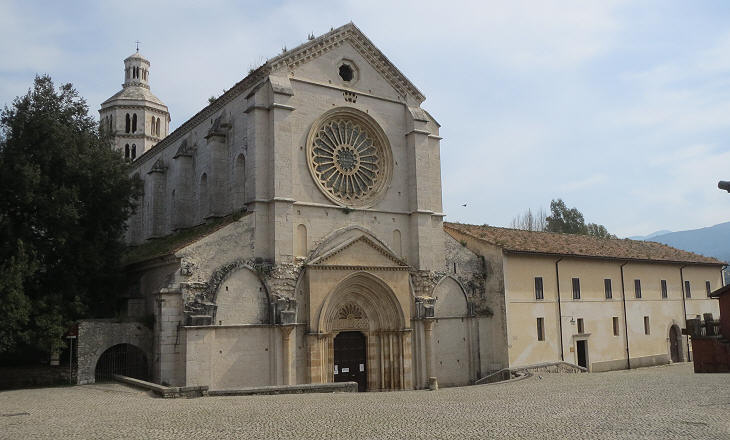 The Abbatial Church was consecrated by Pope Innocent III in 1208 and it is regarded as a masterpiece of Cistercian architecture. It was most likely designed by monks who came from Clairvaux Abbey in north-eastern France. The Cistercian Order placed great stress on solitude and isolation; their monasteries were thus often founded far away from towns and villages, as at Fossanova. Views of the "Tour lanterne" (It. tiburio)

The church is visible from a great distance owing to the "tour lanterne" built above the intersection of the main nave with the transept. This "central bell tower" can be seen at many French Cistercian abbeys (see those at Sénanque and Silvacane - it opens in another window), but it is not as large as at Fossanova, because the latter was rebuilt at the end of the XVIth century after a lighting strike had damaged it. Lantern towers are also typical of English Cathedrals, e.g. at St. Albans and Winchester. 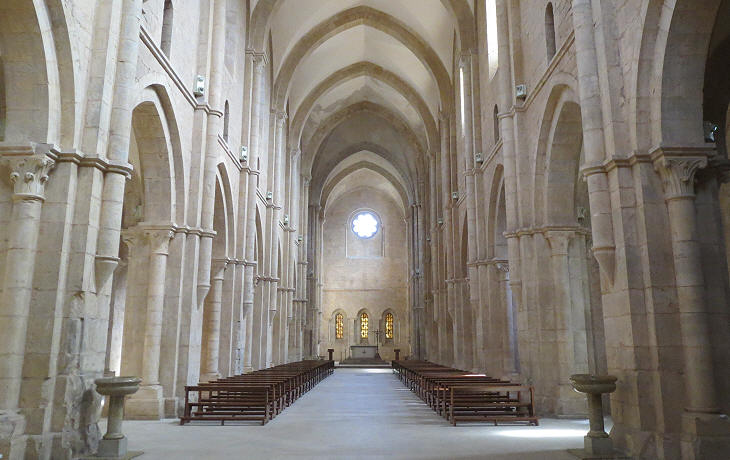 De malis bonum (good out of bad) could be said about the Abbatial Church having been turned into a stable for water buffaloes in 1812. All altars, paintings, stuccoes added in the course of many centuries were removed, thus returning the building to its original simplicity and spirituality (you may wish to see the interior of the Abbatial Church of Casamari which was built shortly after that of Fossanova). 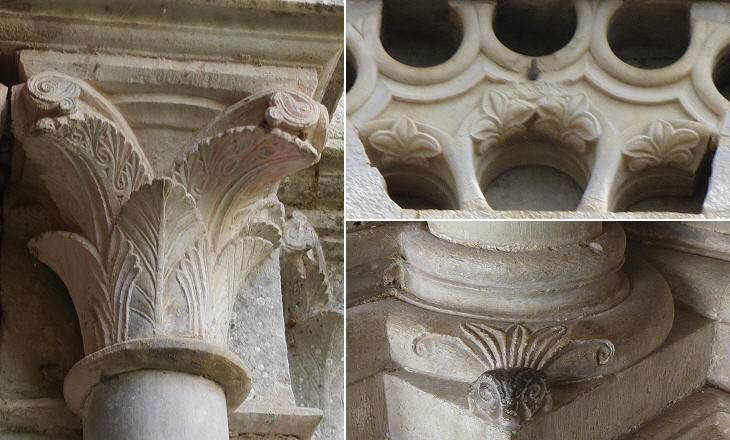 Details of the decoration of the façade and of the cloister

Most medieval churches were decorated with statues and reliefs portraying not only saints and episodes of the New and Old Testaments, but a large selection of fantastic animals too. The Cistercians felt that this practice drew away the faithful from praying and concentration. They decided to limit the decoration of their buildings to vegetal motifs. Consistent with the design of many other abbeys throughout Europe the Chapter House was located on the eastern wing of the cloister. It was large enough to hold all the monks of the abbey for readings or for listening to sermons delivered by the abbot or senior monks. It was decorated with elaborate capitals. 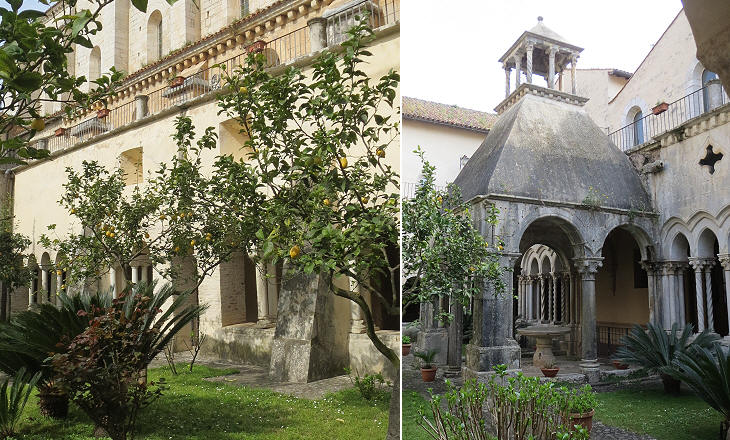 Cloister: (left) older side; (right) late XIIIth century side with an aedicule

The southern side of the cloister was rebuilt in the late XIIIth century by masons from Rome; they added an aedicule which was built making use of ancient columns (the Abbey stands on a former Roman villa). The purpose of the aedicule is not entirely known; it might have housed a basin for washing in, similar to that which can be noticed in the cloister of Monreale. 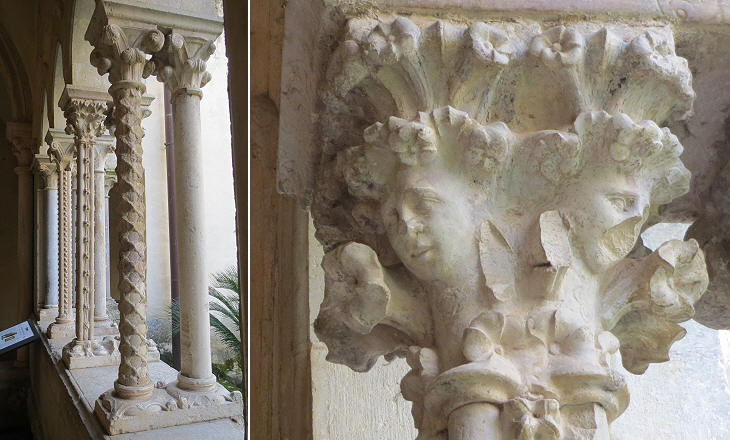 Cloister: columns and capitals of the new side

The new side of the cloister recalls that at S. Paolo fuori le Mura. The Cistercian ban on portraying human beings was no longer complied with. A 1960s hippie would have been stunned by seeing the capital shown above. It would have reminded him of John Phillips' song San Francisco which says: If you're going to San Francisco, be sure to wear some flowers in your hair.
You may wish to visit the cloister of S. Giovanni in Laterano. 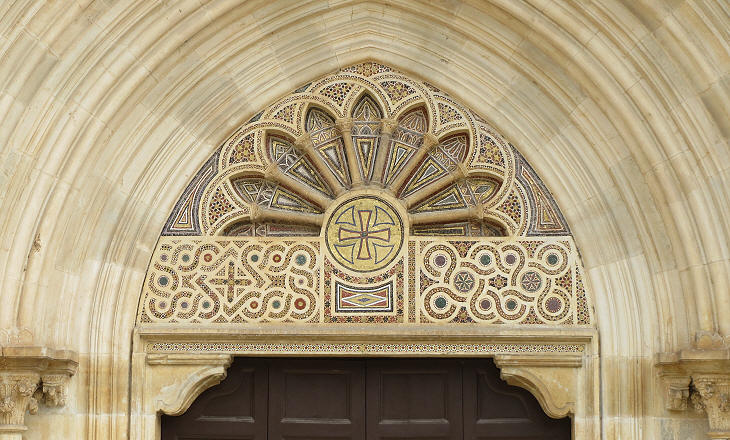 The French Cistercian monks who designed the church would not have approved of the decoration of the portal which was added during the XIIIth century. This type of decoration known as Cosmati work was typical of Rome and its surroundings and it originated from the availability of ancient coloured marbles. The portal at Fossanova shows signs of an excessive restoration. A finer example of a Cosmati portal can be seen in the Cathedral of Civita Castellana. 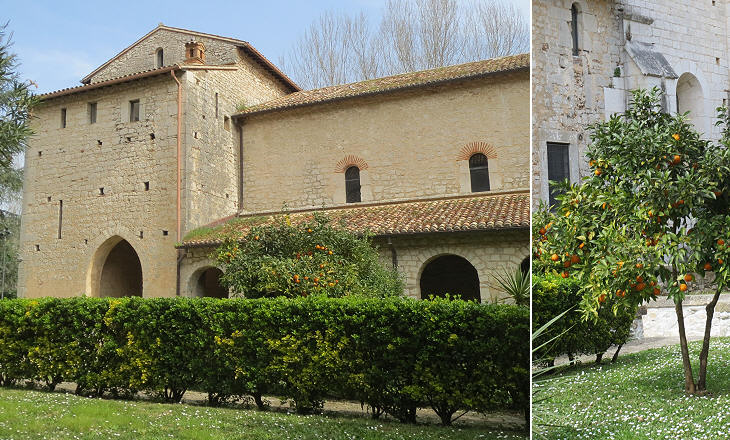 (left) Hospital and hostel; (right) orange trees; their fruit are edible, unlike those at Giardino degli Aranci and at Orti Farnesiani

The abbey was self-sufficient in many respects. Its facilities included farms, stables, warehouses and a long building which housed a hostel and a hospital for pilgrims. In 1274 St. Thomas Aquinas stopped at Fossanova on his way to Rome and eventually Lyon to attend a Council summoned by Pope Gregory X. He was already ill and after a few days he passed away in a small room of the hostel. According to the account of his confrères he was conscious until the end. 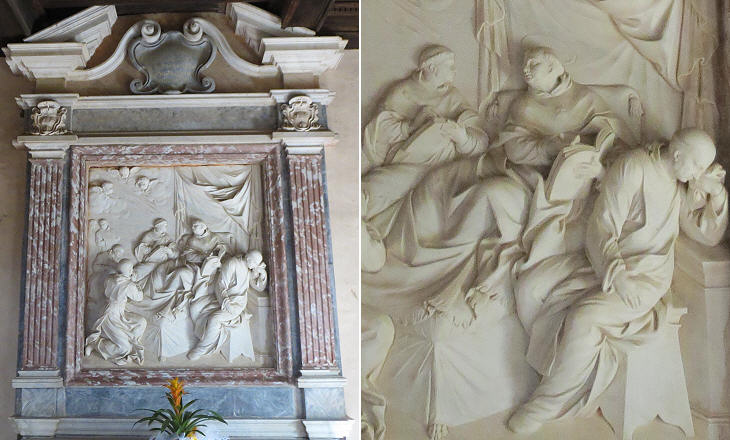 Chapel of St. Thomas Aquinas and detail of the relief showing the saint on his deathbed

The treatises written by St. Thomas Aquinas (a Dominican monk from Aquino, a town in the Kingdom of Naples near the border with the Papal State) are a cornerstone of Christian Theology. In 1323 Pope John XXII canonized him and in 1369, when the Popes were at Avignon his relics were moved to the Dominican Convent of Toulouse where they still are. Some of them, however are in the Cathedral of Priverno. In 1567 he was proclaimed a Doctor of the Church by Pope Pius V.
In 1646 ca Cardinal Francesco Barberini built a chapel dedicated to him in the hostel. The altar has a fine marble relief, which was attributed to Gian Lorenzo Bernini, but most likely is a work by Alessandro Algardi or of one of his assistants. In that period reliefs were often used as altarpieces. You may wish to see some of them. In 1445 Fossanova was assigned to a cardinal who had the title of Commendatory Abbot, similar to Abbazia di Farfa and Abbazia di Subiaco. Some of them (e.g. Cardinal Pietro Aldobrandini) cared for the abbey and its maintenance, but the majority regarded it just as a source of revenue and Fossanova declined until it was closed by the French in 1798 and a second time in 1806. It was reopened in 1826 and today it is a Franciscan monastery.
The image used as background for this page shows a relief with the symbol of St. Paul, which indicates a link with S. Paolo fuori le Mura.