You may wish to see an introductory page to this section or a page on Roman Saintes first. 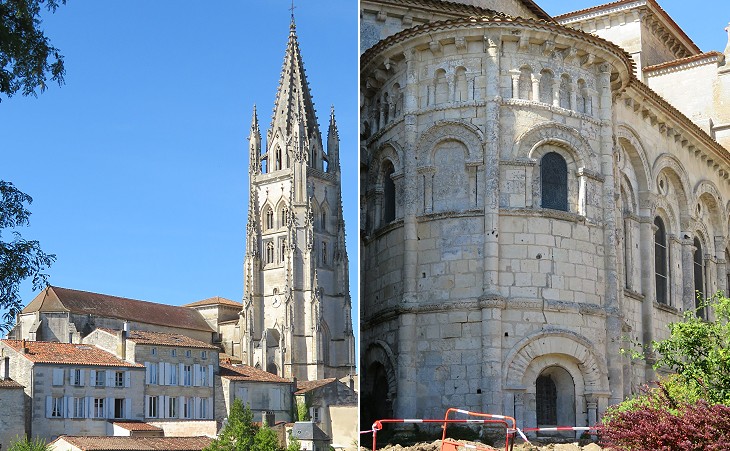 (left) Saint-Eutrope; (right) its Romanesque side

The Church of St Eutrope is a structure of the 11th century; its crypt is probably still older; some of the capitals of columns have quaint carvings. The spire was built in the 15th century.
John Murray III - Hand-book for Travellers in France - 1843
Pope Urban II is best known for having launched the First Crusade in 1095. He indicated also another mission to the Christian knights of Europe, i.e. the Reconquista of the Iberian peninsula from the Moors; he made the great shrine dedicated to Santiago Matamoros (St. James the Apostle, Slayer of the Moors) at Compostela a bishopric see and he promoted pilgrimages to it. He also invited the French rulers to erect churches and facilities for the pilgrims. He personally consecrated the Abbey of Saint-Gilles, the Basilica of Saint-Sernin at Toulouse and the Basilica of Saint-Eutrope at Saintes. 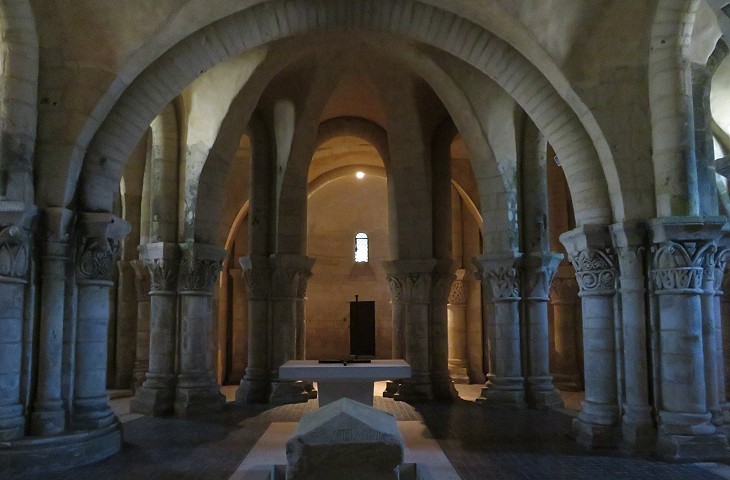 Saint-Eutrope: Romanesque crypt; in the foreground a VIth century sarcophagus bearing the name of Eutropius which was found in 1843

About the pilgrimage was thrown every lure that could fascinate the mediaeval mind. Relics were the passion of the age, and these in profusion were dangled before the eyes of the intending pilgrim to Compostela. (..) On the way there and back many spiritual treasures could be visited with little extra effort. The itinerary of the pilgrims was arranged with especial care from this point of view. The tomb of (..) St. Trophime at Arles; (..) that of St. Eutrope at Saintes (..) are only a few among the more important of an unending number of relics.
Arthur Kingsley Porter - Romanesque Sculpture of the Pilgrimage Roads - 1923
A church was built in the VIth century to house the tomb of St. Eutrope, a legendary Ist or IIIrd century martyr, on a hill outside the Roman town, not far from the Amphitheatre. It was rebuilt in the XIth century and it was enlarged and modified in the following ones; it still retains its original lower church, while the upper church was greatly damaged during the French Revolution. 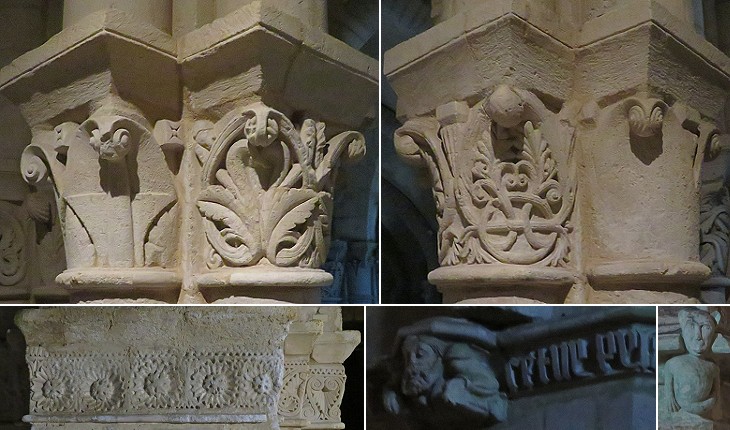 Saint-Eutrope: crypt - details: (above) Romanesque capitals which were restored in the XIXth century; (below-left) a floral relief which most likely decorated the VIth century church; (below-centre) a XVth century decoration and inscription celebrating King Louis XI; (below-right) detail of a capital

In 1998 Saint-Eutrope was included in the UNESCO World Heritage List with other French churches on the route to Santiago de Compostela, e.g. the Abbey of Saint-Gilles, the former Cathedral of Saint-Bertrand-de-Comminges, Basilica of Saint-Sernin at Toulouse and Basilica of Saint-Seurin at Bordeaux. The (Benedictine) Abbey was founded in 1047, but the facilities for the nuns were greatly damaged by fire in 1648 and they were entirely rebuilt.
It has been shown that the proportion of women who became nuns was very small in comparison with the total female population. It has indeed been insufficiently recognised that the medieval nunneries were recruited almost entirely from among the upper classes. They were essentially aristocratic institutions, the refuge of the gently born.
Eileen Edna Power - Medieval English Nunneries - 1923.
The excerpt refers to England, but it applies also to Abbaye aux Dames (and to many Italian Benedictine nunneries) which could rely on substantial revenues and was directed by abbesses from the noblest families of France. In 1792 the Abbey was confiscated and it was turned first into a prison and then into barracks. Today it houses a luxury hotel and facilities for a music festival which was created in 1972. 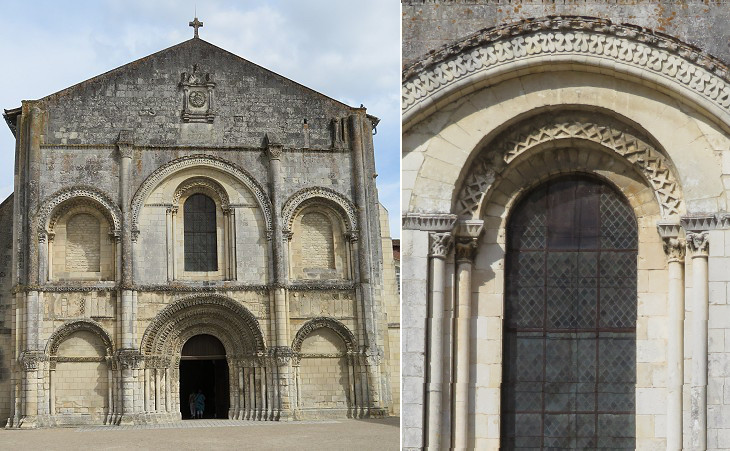 In the south of France remained important municipalities of Greek or Roman origin, preserving traditions unknown or obliterated in the north. Consequently architecture fell into very different forms in Aquitaine, in the Auvergne, in the Isle of France, in Burgundy, in Normandy and in Provence, and the school of each province has to be studied by itself.
Thomas Graham Jackson - Byzantine and Romanesque Architecture - 1913
In 1924 the City of Saintes bought the church of the abbey which the military authorities planned to demolish to make room for new facilities. After years of careful restoration it was reconsecrated in 1939. The design of the façade is characterized by the similarity between the three portals and the three windows above them. 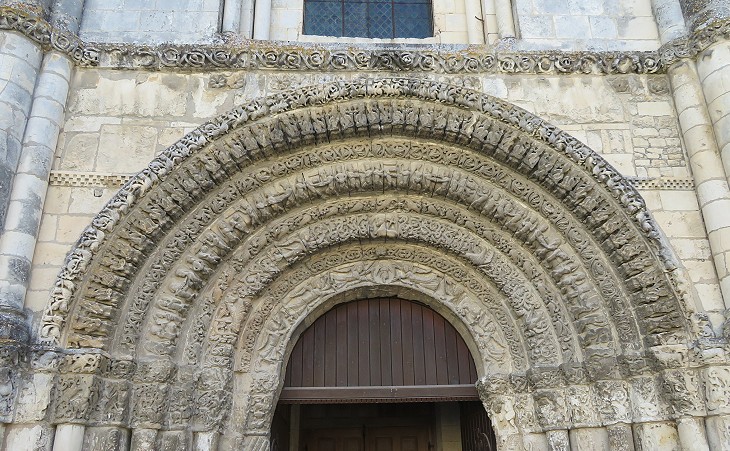 The original decoration of the façade probably included some statues at the sides of the portals and reliefs in their tympana (as at Saint-Just-de-Valcabrère) which were removed/destroyed in 1792, but the iconoclastic fury of the French Revolutionaries spared the chiselled reliefs of the voussoirs, most likely because they did not portray saints or kings. 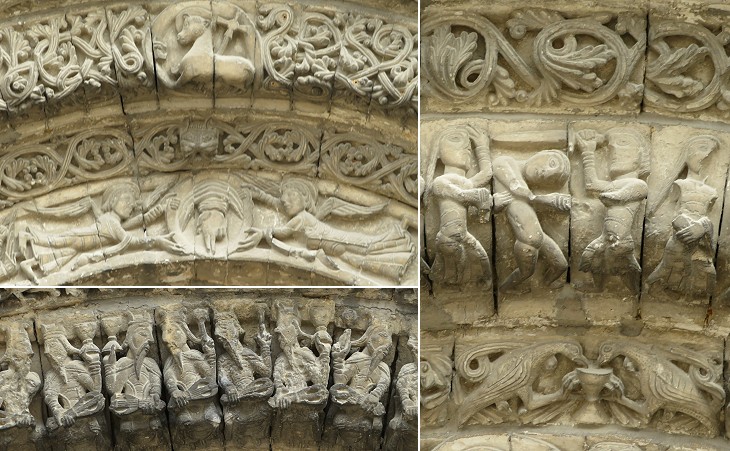 Notre Dame: main portal: details showing traditional religious symbols and: (left-below) the Elders or other figures of the Apocalypse playing musical instruments; (right) the Massacre of the Innocents

The main portal has a total of eight voussoirs: the four larger ones were decorated with: Elders; the Massacre of the Innocents (but maybe the mass killings of the early martyrs); the Lamb of God and the symbols of the Four Evangelists; angels surrounding the Hand of God. Four narrower voussoirs were decorated with foliage, but some religious symbols can be noticed. The subjects are typical of Romanesque sculpture, but they are rarely depicted in such a crammed manner. 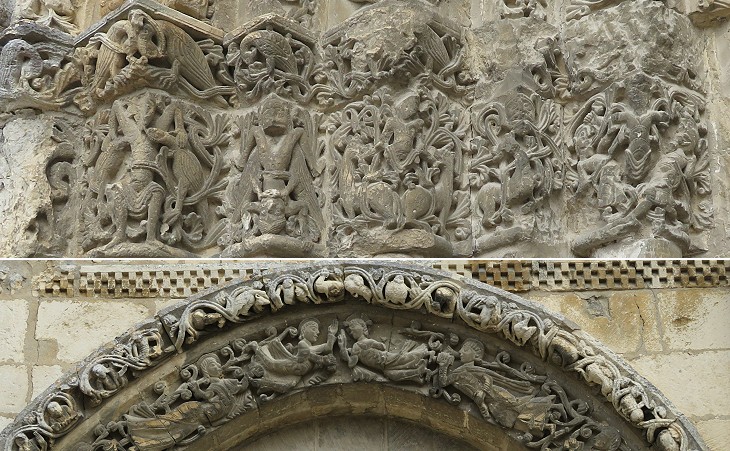 Notre Dame: (above) main portal capitals; (below) left portal, most likely depicting the souls of the nuns

The facade of Ste.-Marie-des-Dames at Saintes dates from two distinct periods. (..) The lower story is obviously more archaic. It seems like (..) influenced by the Moorish ivories (see a Muslim ivory horn) still predominating in the ornament. However, if this church owed much to Spain, it also gave much. We have here one of the earliest examples of voussure sculptures as well as of rows of figures placed parallel to the radii of the portal. The latter motive was taken over by the Spanish sculptors. Porter 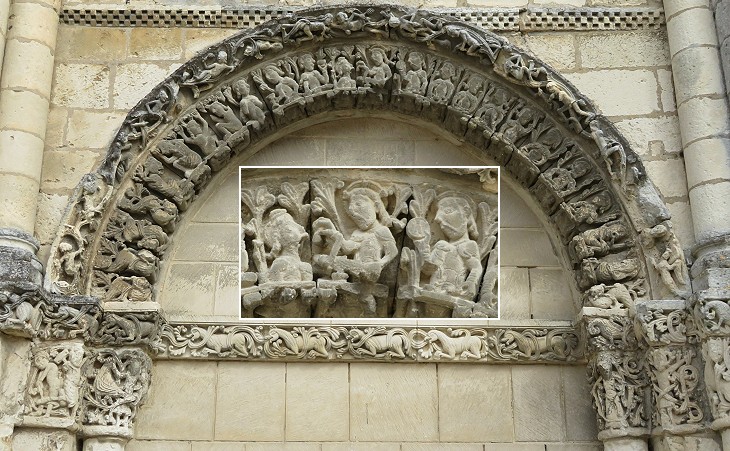 This interchange of influences between Saintes and Spain is easily explained by the position of the former on the road of St. James. (..) The luxuriant barbarity of its decoration (..) suggests a date within the first quarter of the XII century. Porter
You may wish to see the reliefs of some Romanesque churches at Segovia. 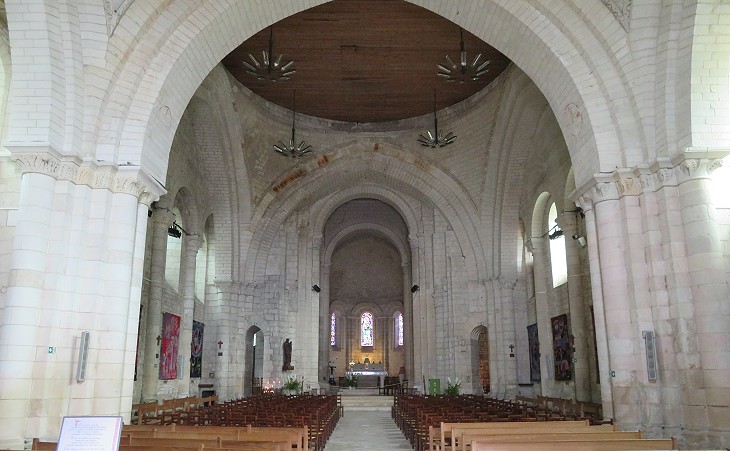 Notre Dame: interior (it had two domes and presumably altars and a rich decoration)

The interior was characterized by two small stone domes, a peculiar feature of the Romanesque architecture of Aquitaine which attained its finest result at Saint-Front at Périgueux. 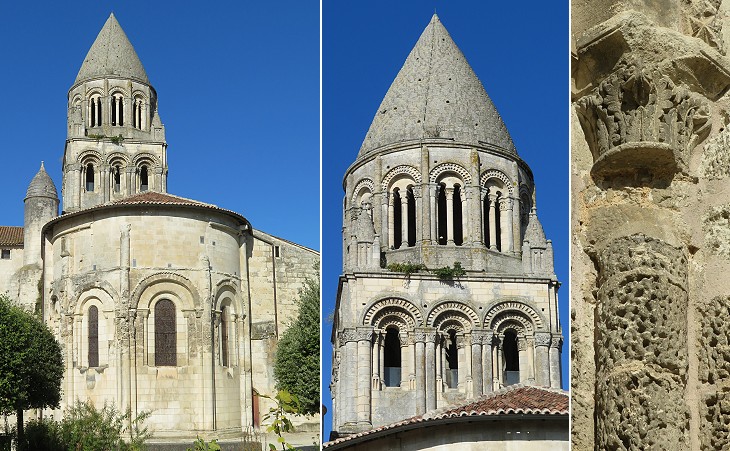 Notre Dame: (left) apse and bell tower; (centre) bell tower (similar to that at Saint-Front); (right) column and capital of the apse; the image used as background for this page shows the small dome near the bell tower

The bell tower is dated approximately the same period as the façade and the apse, but both its architectural features and its sculptures show a different hand. 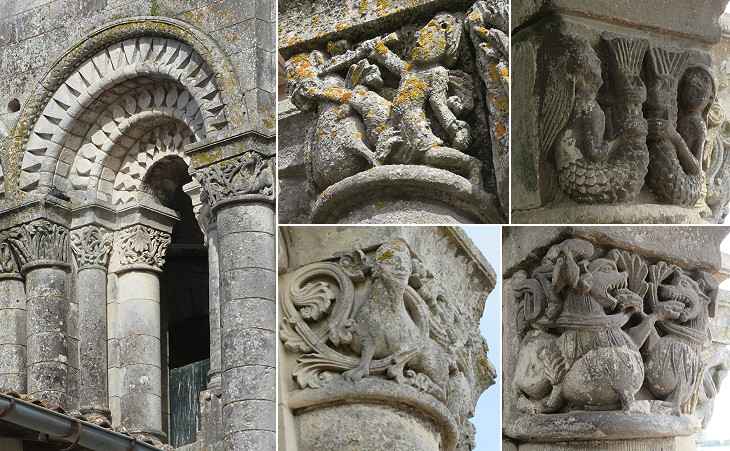 Notre Dame: bell tower: (left) one of the windows which shows a decoration with variations of the chevron pattern (see other examples of this pattern in England and Sicily); (centre/right) reliefs on the capitals depicting a crippled man killing a dragon, mermaids, sphinxes and other fantastic animals; they are hardly visible from the ground, yet they were carefully carved

In general the sculpture in this district is confined chiefly to the capitals. These (..) are very commonly carved with figures, and gospel subjects, or with fanciful animals. Jackson