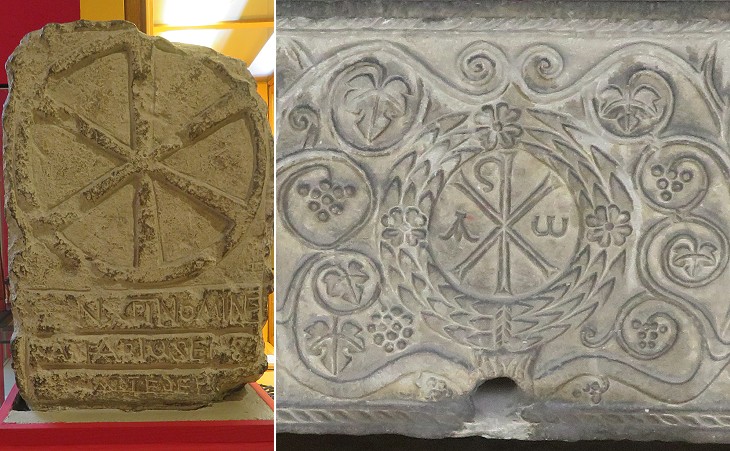 In 413 Emperor Honorius assigned Aquitaine to the Visigoths who eventually conquered most of the Iberian peninsula. In 507 the Franks conquered the region. A poorly carved tombstone indicates that in 590 Civitas Petrocorium (Périgueux) was a bishopric see, a very important factor for the medieval development of the town which towards the end of the VIIIth century became the capital of a county (Périgord) named after it. 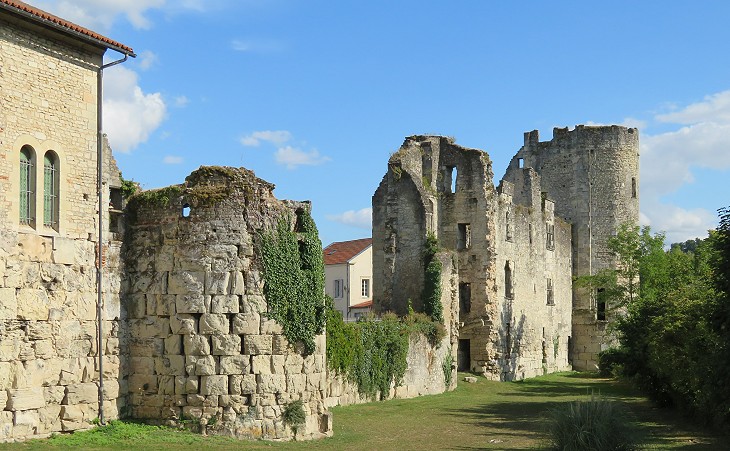 Relations among a) the feudal lords, b) the bishops, c) the citizens of la Cité, the historical town, and d) those of Puy-Saint-Front, a new settlement which developed around a church on high ground (puy), east of la Cité, were very complex and often led to open conflicts. Some of the noble families built their fortified houses on the ancient Roman walls. Gradually the importance of Puy-Saint-Front grew and in 1240 the two communities of citizens united their governing bodies and created today's Périgueux. 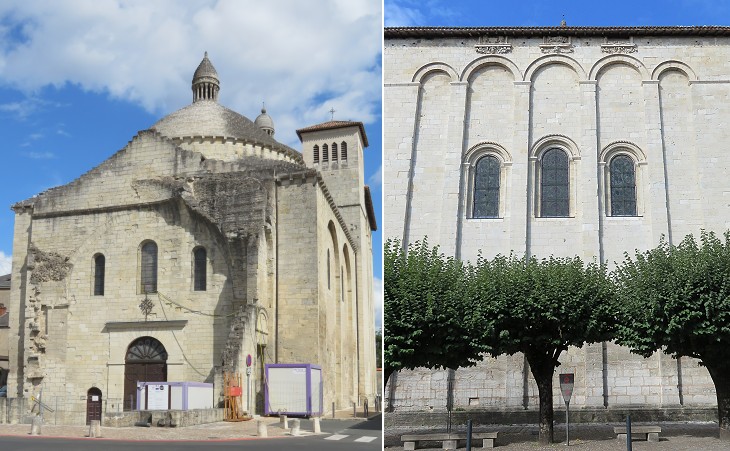 The Romans had covered their buildings with vaults of stone or concrete, and the Romanesque architect felt he must do as the Romans did and protect his churches with a more monumental and less perishable covering. The wooden roof was a constant source of danger. (..) Nearly all the Carolingian cathedrals were burned, - many of them five or six times, - during a period of 200 years. (..) On every ground, both of security and dignity, the Romanesque architect felt that he must have a stone vault. (..) In Périgueux itself the old cathedral of S. Etienne still preserves two of the three domes it once possessed.
Thomas Graham Jackson - Byzantine and Romanesque Architecture - 1913 / Gothic Architecture in France, England, and Italy - 1915
Saint-Étienne-de-la-Cité was damaged in 1577 by the Huguenots and in 1652 during the Fronde. In 1669 the bishopric see was moved to Saint-Front and Saint-Étienne (reduced in size) became the parish church for the few inhabitants of la Cité. 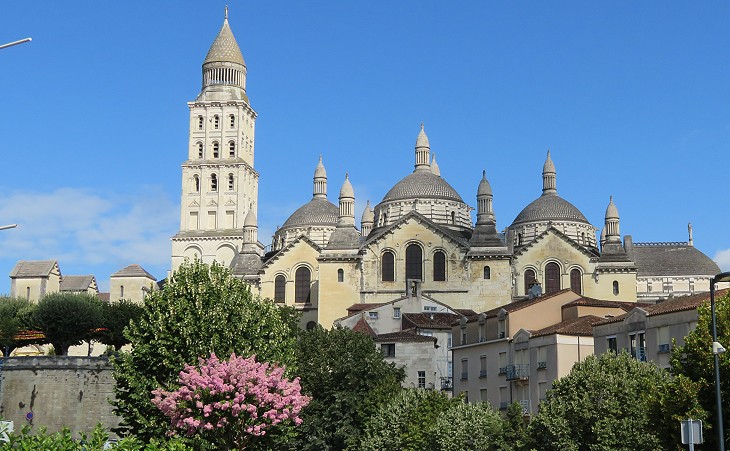 Périgueux is composed of streets narrow, tortuous, and dirty within, is fringed by green alleys externally. Its Cathedral of St Front is supposed to be of an age anterior to the 10th century except the lofty tower 197 ft high. The arrangement of the ground plan and the construction of this church display some remarkable peculiarities. It is in the form of a Greek cross with 4 equal arms formed by squares set round a 5th square in the centre. Each square is surmounted by a stone vaulted cupola concealed from without by a wooden roof, but visible to those who chose to mount up to the roof.
John Murray III - Hand-book for Travellers in France - 1843 Saint-Front: four of the five domes

At S. Front (..) the domes are treated very architecturally on the outside, constructed of ashlar and crowned with finials. Jackson
The five domes were covered by a single structure which was removed in the 1850s; three domes were about to collapse and they were dismantled and rebuilt by Paul l'Abbadie, the architect who in 1873 was chosen for the construction of Basilique du Sacré-Coeur de Montmartre which greatly resembles Saint-Front. Some years later his restoration of the Cathedral was criticized for having gone too far in adding some new features, e.g. the round turrets at the top of the domes, but it was similar to many other XIXth century creative restorations of the medieval monuments of France. 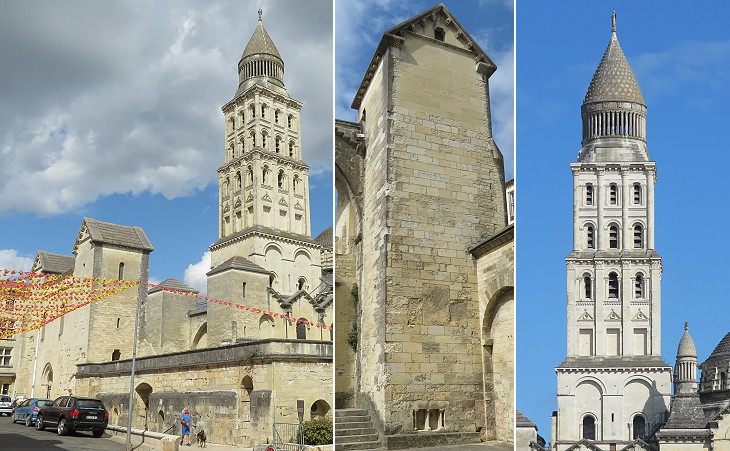 The history of the church is this. Bishop Froterius (976-991) began the earlier, - the Latin, - church which was consecrated in 1047. (..) In 1120 this church was consumed by a terrible fire which even melted the bells in the campanile, the aisles alone escaping, thanks to their stone roofs. It was in consequence of this disaster that the re-building of the church in its present form was begun. (..) Saint-Front consists of two parts, of different dates. At the west end there remains part of a basilican church with nave and aisles, which probably finished eastward with three apses. It had transepts which still exist as detached buildings, the original crossing between them and the eastern parts having been destroyed to make way for the second church. Jackson
Saint Front was the legendary first bishop of Périgueux; early accounts of his life claimed he was sent by Saint Peter to preach the new faith in Aquitaine. A church to house his assumed relics was built in the Vth century. In the XIth century a Benedictine abbey incorporated the remains of that church into a new one which was partially destroyed in 1120. 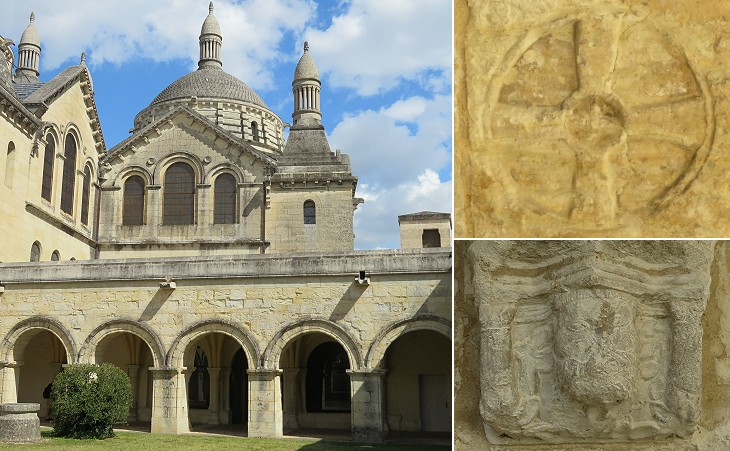 Saint-Front: (left) Romanesque part of the cloister; (right) some of its sculptured stones

A cloister adjoining the western end of the church is the main remaining evidence of the abbey. It is dated XIIth century, but it was modified in the XIVth and XVth centuries. The effects of a creative restoration in 1898-1929 were partly reduced in 2001-2003 when some of its Romanesque features were made visible again. 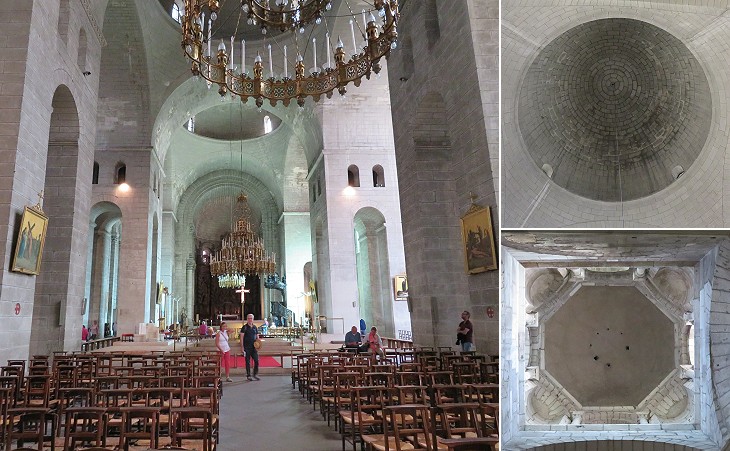 This later building is a five domed cruciform building, so closely modelled on the plan of S. Mark's at Venice that there can be no doubt the architect had seen and measured the Italian church to reproduce it on French soil. Not only in plan, but in dimensions the two correspond very nearly. (..) In the new part the opportunity was taken of building something much grander, - something that might be compared to the great church on the lagoons of which the fame had reached the west. (..) It is well known that the south and south-west of France had during the early Middle Ages commercial relations with the Byzantine empire, and especially with Venice where alone in Italy the traditions of Byzantine art lingered, and these countries were then the great mercantile centres of Europe. Jackson 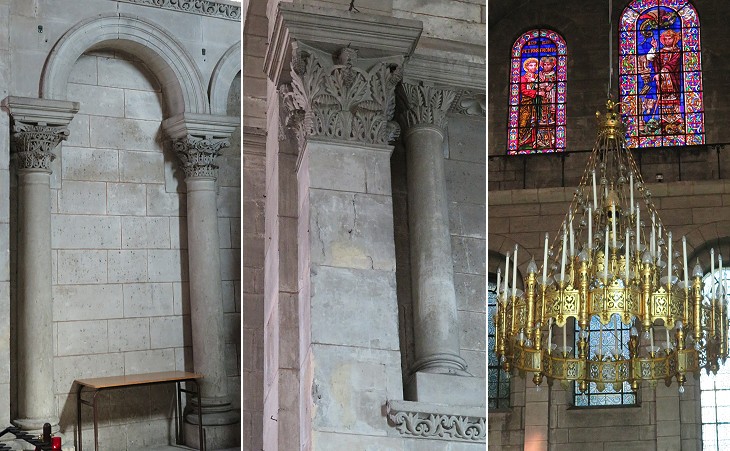 Saint-Front - interior: (left/centre) columns and capitals; (right) a chandelier which resembles that in the Cathedral of Aachen

Being aware of the extensive restoration which occurred at Saint-Front reduces the interest in the architectural features of its interior. One tends to believe that some combed Byzantine capitals were made in the XIXth century, maybe bearing in mind those at Philippi or Constantinople.
In 1998 Saint-Front was included in the UNESCO World Heritage List with other French churches on the route to Santiago de Compostela, e.g. Saint-Eutrope at Saintes, the former Cathedral of Saint-Bertrand-de-Comminges, Saint-Just-de-Valcabrère, Basilica of Saint-Sernin at Toulouse and Basilica of Saint-Seurin at Bordeaux. The supposition that the architects and their assistants were Frenchmen, and not Italians or Greeks, is confirmed by the character of the carving at Périgueux, which is much more Romanesque than Byzantine. Jackson
A decorated XIth century tomb and other reliefs and architectural decorations of the interior of the Cathedral were moved to a museum. Jackson most likely referred to them in his comment. They greatly depart from the style of the capitals which can be seen in the church.
The image used as background for this page shows a relief of a griffin at the museum; it decorated the bell tower of Saint-Front; you may wish to see the elaborate Romanesque decoration which still embellishes the bell tower of Notre Dame at Saintes. 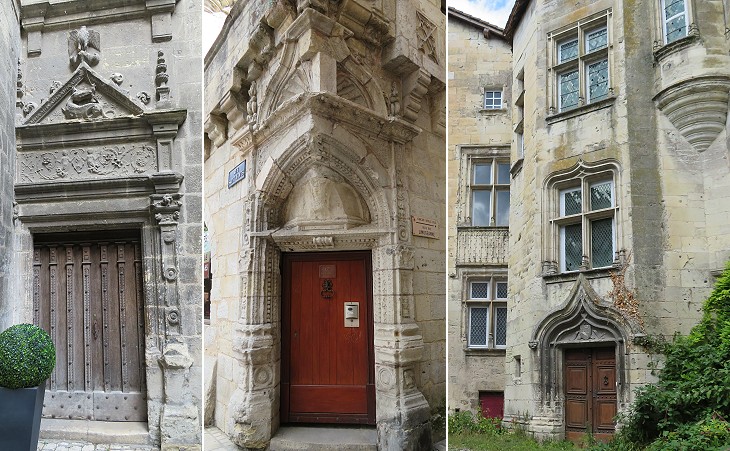 (left) Hotel Fayard with a salamander, the heraldic symbol of King Francis I of France on the portal; (centre) house at the corner of Rue l'Aiguillerie; (right) Logis Gamanson (XIIth-XVIth centuries); you may wish to see the Renaissance houses of Vieux-Lyon

The streets of Périgueux contain some curiously ornamented houses of the 16th century, one at the corner of Rue l'Aiguillerie bearing the date 1518, 2 others in Rue Taillefer Nos 31 and 37, and a 4th at the end of the Rue de la Sagesse, ornamented with arabesques and carvings, merit notice. There are some buildings and vaults which are as old as the 12th and 13th centuries. The celebrated patés de Périgueux, well known to all gourmands, are made of partridges combined with truffles and form an article of considerable export. Murray 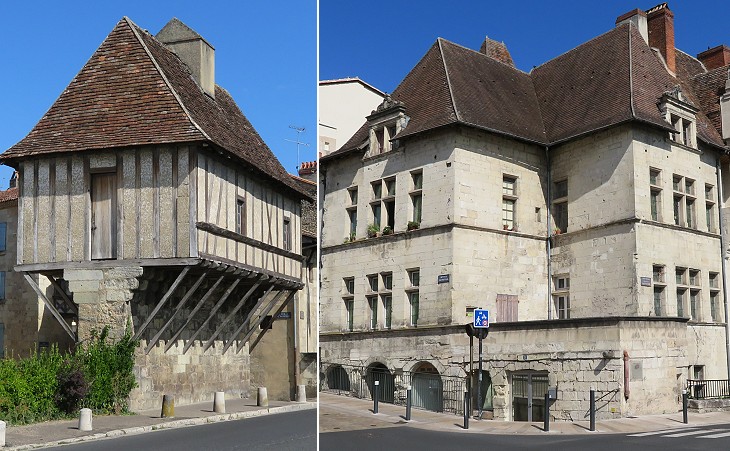 (left) The Eschif, a watchpost on the medieval walls along the river which controlled the passage over a bridge; (right) Hotel Salleton (XVIth century)