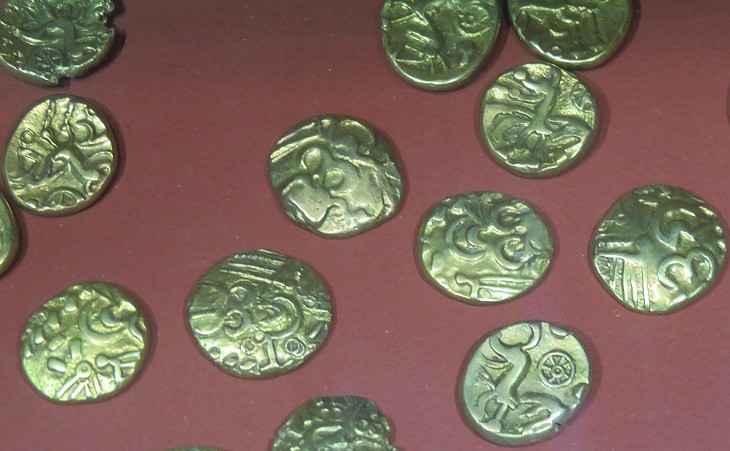 Brussels Art & History Museum: hoard of Pre-Roman coins found at Thuin, not far from Bagacum in 1980

The coins are known as Gallic staters and are imitations of a Greek currency by the same name, in particular that minted by King Philip II of Macedonia. These coins were perhaps introduced in the region of Bagacum Nerviorum by Greek merchants from Massalia (Marseille); similar staters have been found in other parts of Gaul, e.g. near Bordeaux and also in Britain. They often show a stepping horse on one side, an attempt to imitate the two chariot horses which were usually stamped on the reverse of Philip's staters. 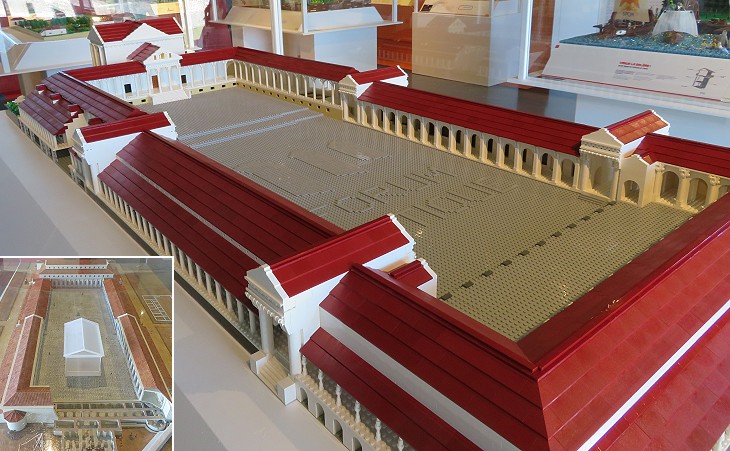 Museum of Bavay: a simplified LEGO model of the Forum of "Bagacum"; (inset) a more professional one

When Caesar inquired what states were in arms, how powerful they were, and what they could do, in war, he received the following information: that the greater part of the Belgae were sprung from the Germans, and that having crossed the Rhine at an early period, they had settled there, on account of the fertility of the country, and had driven out the Gauls who inhabited those regions. (..) And that the Nervii are reckoned the most warlike among them. (..) Concerning the Nervii's character and customs when Caesar inquired he received the following information: that there was no access for merchants to them; that they suffered no wine and other things tending to luxury to be imported; because, they thought that by their use the mind is enervated and the courage impaired: that they were a savage people and of great bravery: that they upbraided and condemned the rest of the Belgae who had surrendered themselves to the Roman people and thrown aside their national courage: that they openly declared they would neither send embassadors, nor accept any condition of peace (Book II). Caesar, on being informed of their acts, since he saw that war was being prepared on all sides, that the Nervii, Aduatuci, and Menapii, with the addition of all the Germans on this side of the Rhine were under arms, (..) thought that he ought to take measures for the war earlier [than usual]. Accordingly, while the winter was not yet ended, having concentrated the four nearest legions, he marched unexpectedly into the territories of the Nervii, and before they could either assemble or retreat, after capturing a large number of cattle and of men, and wasting their lands and giving up that booty to the soldiers, compelled them to enter into a surrender and give him hostages (Book VI).
Julius Caesar - The Gallic Wars - Translated by W. A. McDevitte and W. S. Bohn 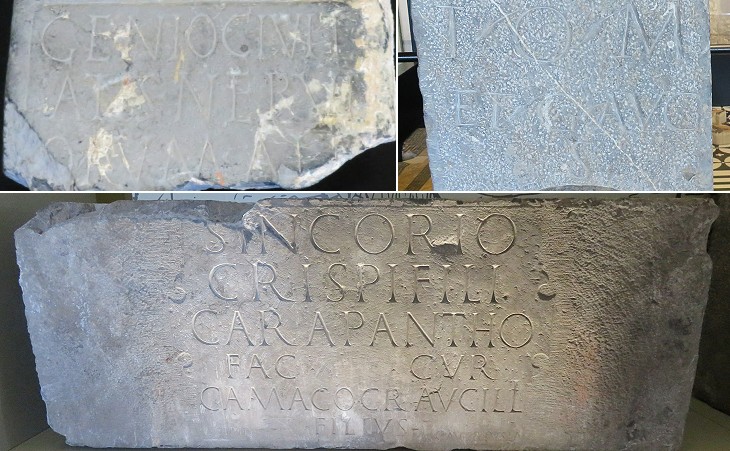 Caesar described the Nervii as fierce enemies of the Romans, but in 77 AD Pliny the Elder indicated that they were a free nation, and thus enjoyed a privileged legal status. It is possible that they acquired it by standing by the Romans in 70 AD, during a revolt of the Batavii.
Their main town was referred to as Civitas Nerviorum as well as Bagacum, a term of local origin, similar to Reims which was referred to as both Civitas Remorum and Durocortorum. 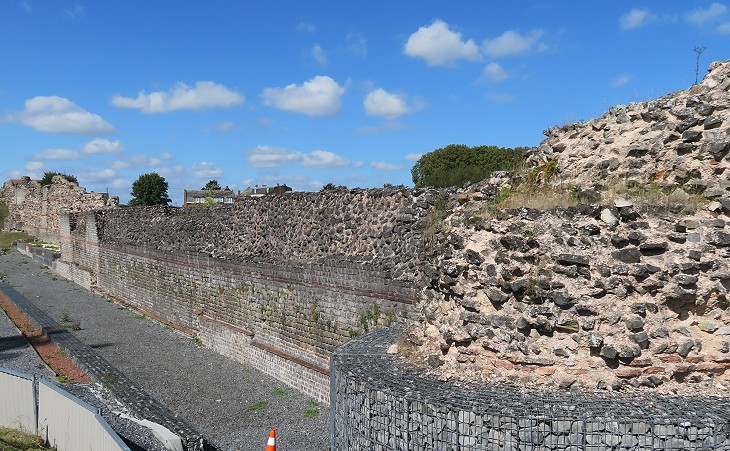 In 1906 some modest excavations identified the site of a bastion and other Roman buildings at Bavay, a tiny French town (2,000 inhabitants) near the border with Belgium, where small ancient objects had been frequently found. In May 1940 the Germans dropped incendiary bombs on Bavay and the fire destroyed most of its buildings. The reconstruction plan, thanks to Henri Biévelet, a local priest and antiquarian, allotted a large area to future archaeological excavations, which began in 1946 and eventually led to unearthing the whole Forum of the Roman town. 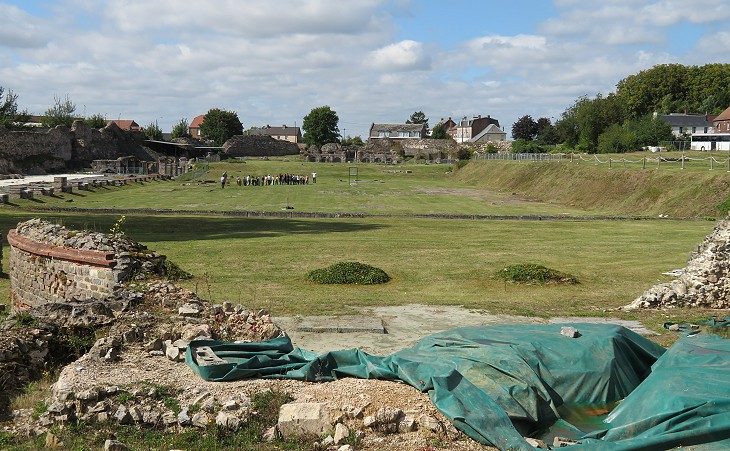 Forum seen from the Basilica at its eastern end

The town was most likely founded by Marcus Vipsanius Agrippa at the centre of a net of military roads which facilitated the movement of the Roman legions in the highly forested region; in particular roads from Bagacum reached eastwards Civitas Tungrorum (Tongeren) and Colonia Agrippina (Cologne), southwards Reims and northwards Turnacum (Tournai). Eventually the roads fostered the development of trade and the construction of facilities for the travellers; Columns to Jupiter served as reference points and other columns told travellers how far they were from their final destination. 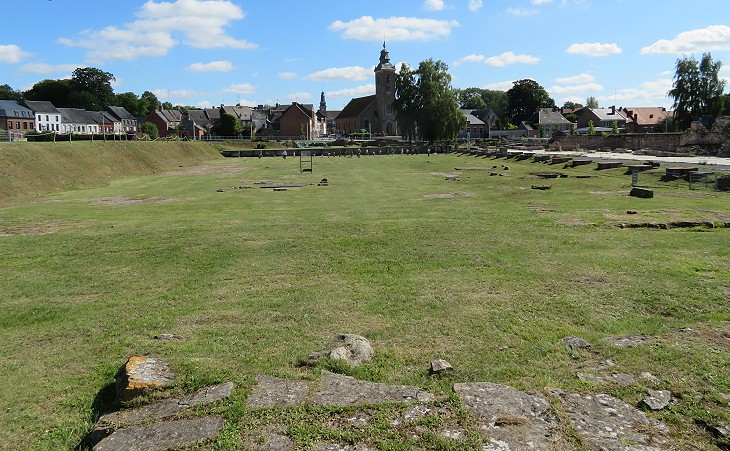 The Forum was pretty large, especially considering the northern latitude of the town and the prevailing cold winds which blow on the region; its western part most likely housed a temple, possibly the Capitolium or another building for the celebration of ceremonies in honour of Rome and the imperial family. This part of the Forum was paved and stood on slightly higher ground. 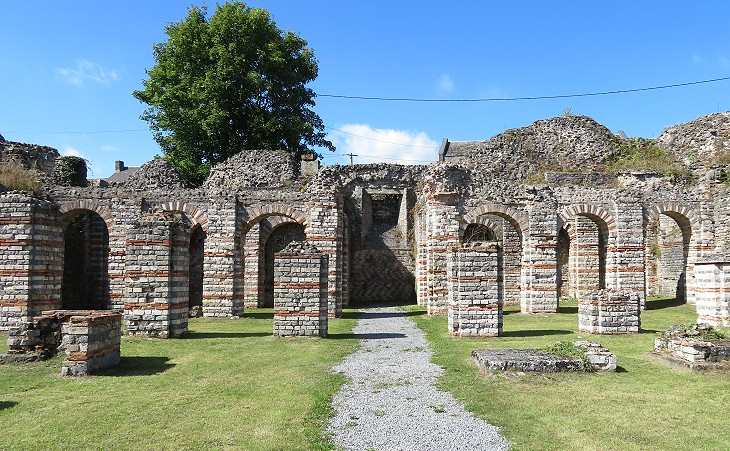 Cryptoporticus, i.e. the underground structures which supported buildings, perhaps the Curia, the local Senate, at the western end of the Forum

The Forum of Bagacum was destroyed in 172 by a raid of the Chatti, a bellicose German tribe. Its underground structures were rebuilt making use of opus listatum, a construction technique which was aimed at cutting costs by reducing the use of bricks. It was used also for the Amphitheatre of Bordeaux and, with a highly surprising decorative effect, for the Roman walls of Le Mans. 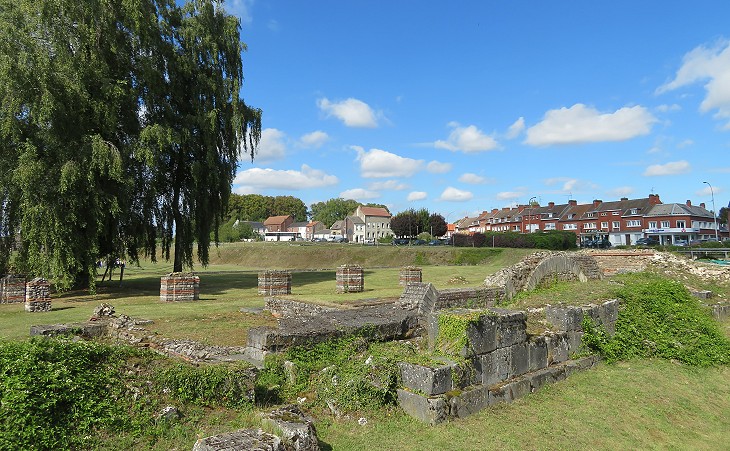 Site of the Basilica

Roman basilicas were an indoor expansion of the Forum; in particular they housed the tribunal of the town, as at Pompeii. That of Bagacum had a size similar to Basilica Aemilia in Rome and to that of Foro Colonial at Tarragona. The long sides of the Forum housed administrative buildings, shops and taverns. They are partially yet to be excavated. 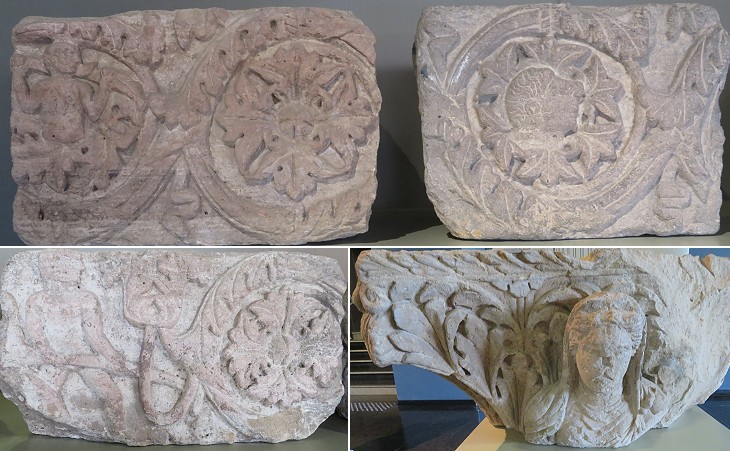 Museum of Bavay: reliefs from the Forum which were found in the walls

The rebellion which created the Gallic Empire in 260 was put down by Emperor Aurelian in 273; it was a civil war which greatly weakened the Roman defences along the River Rhine and allowed the Franks to raid many towns of Northern Gaul, including Bagacum. The town must have already experienced a major decline because it shrinked to the area of the Forum; after the raid it lost its role of administrative centre of the Nervii. Its new walls were built using materials from the destroyed monuments and the abandoned neighbourhoods, similar to what occurred elsewhere, e.g. at Vesunna (Périgueux). Brussels Art & History Museum: parts of a funerary monument from "Bagacum" which was found in 1867

Bavay had an archaeological museum as early as 1906, but a number of objects from the town and its environs were already on display in those of Brussels, Reims and London. Some long underground galleries near the town were known as Trous des Sarrasins (Holes of the Saracens); they were actually quarries of limestone of sea origin which were exploited by the inhabitants of Bagacum for their buildings. 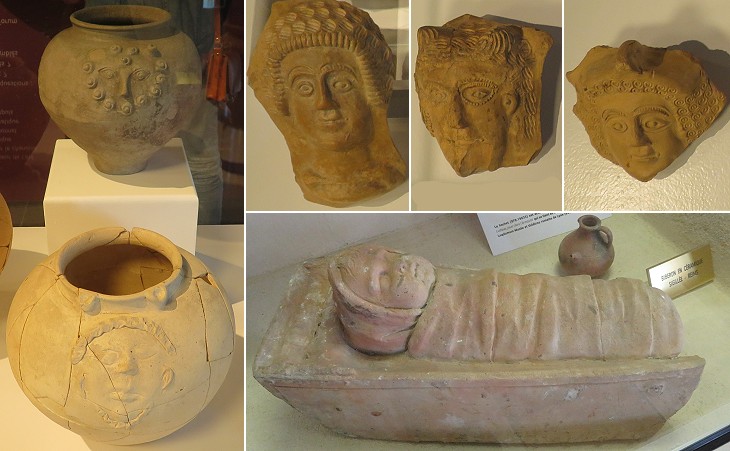 A particular type of pottery was made in the workshops of Bagacum; it was characterized by the depiction of small stylized faces which are difficult to relate to specific gods; perhaps they portrayed calendar symbols (seasons and days of the week). Some vases bear the brand of the maker and they have been found as far as Germany and Britain (see other examples in the Museum of Tournai). 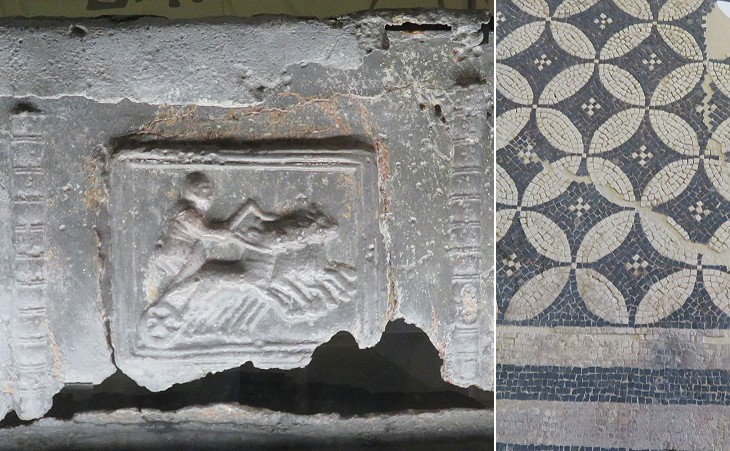 Expensive marble sarcophagi from the Mediterranean countries rarely reached the northern parts of Gaul, where however many decorated lead coffins or urns show that the wealthy and powerful cared about their burial containers. They did so also in Britain, but the decoration of those at Bavay and Tournai are more elaborate than those at Corinium (Cirencester) or Verulamium (St. Albans).
Archaeological campaigns at Bavay and its environs did not unearth many floor mosaics, unlike what usually occurs. That on display at the Museum of Bavay most likely decorated the house of a Roman landlord or of someone familiar with the prevailing fashion in the capital of the Empire, where even the rich and the famous had a preference for black and white mosaics. 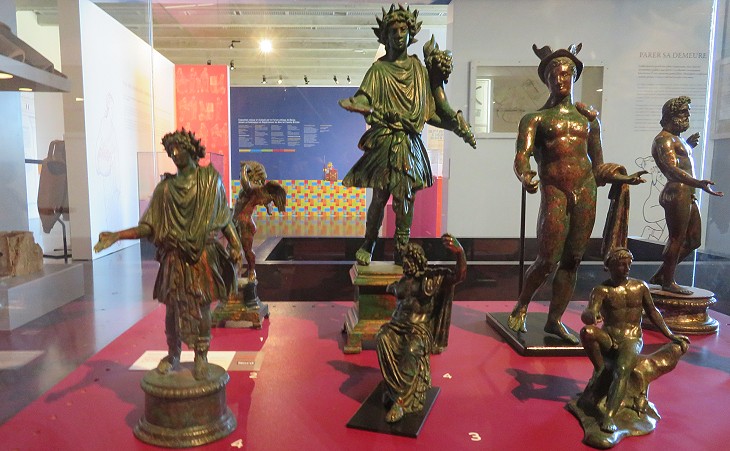 Museum of Bavay: Treasure of Bavay: some of the small statues

In 1969 Henri Biévelet discovered a hoard containing some 350 bronze artefacts, of which twenty were small statues, near the Basilica. The finest objects are dated first century AD. They were probably looted during raids of the town and of the villas in its environs. The hypothesis that they were bound to be melted is a possibility, but it is more likely that they were hid with the intention of selling them at a later time. Even a non-Pagan non-Roman society would have paid for the small bronzes which decorated furniture or clothes. The image used as background for this page shows another object of the Treasure.
You may wish to see some decorative bronze artifacts which were found in a wreck at Mahdia. 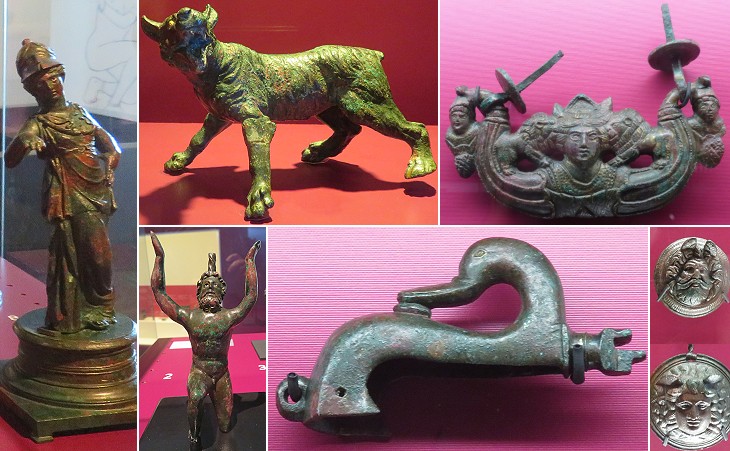 Museum of Bavay: Treasure of Bavay (2): small statues and other objects, some of which are similar to those found at Tournai