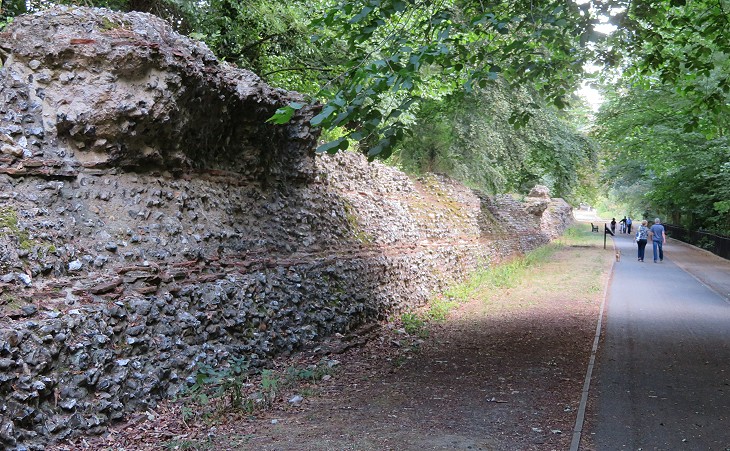 Verulamium Park: remaining section of the walls of the Roman town (see similar walks at Mainz and Trier)

A Celtic settlement named Verlamion is recorded before the conquest of Britain by Emperor Claudius in 43 AD. The Romans founded Verulamium in ca 50 AD and gave it the status of municipium which granted its citizens a degree of self-governance. It is likely that Verulamium and Verlamion coexisted and that the Celtic town gained importance from the arrival of a small community of Roman veterans and officers. 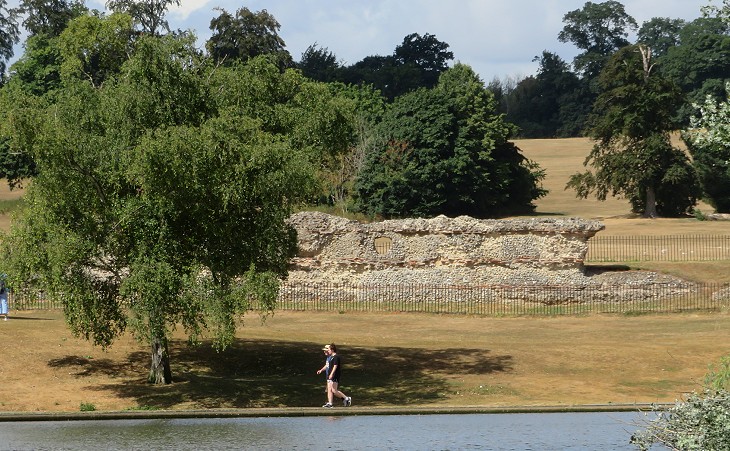 Verulamium Park: Roman walls which were incorporated into a medieval building

A similar catastrophe (to those of Londinium and Camulodunum) was reserved for the municipality of Verulamium; as the natives, with their delight in plunder and their distaste for exertion, left the forts and garrison-posts on one side, and made for the point which offered the richest material for the pillager and was unsafe for a defending force.
Cornelius Tacitus - Annals - Book XIV - Loeb Edition
Tacitus wrote this passage with reference to the destruction of Verulamium by Boudicca, Queen of the Iceni, who led a widespread revolt against the Romans in 60 AD.
The town was rebuilt but the walls which can still be seen in Verulamium Park are dated 265-270, when Britain was part of the short-lived Gallic Empire. It was a turbulent period of the history of the Roman Empire and one during which new walls were built in many cities, including Rome.

The prosperity of Verulamium was due to its being located along an important road which from the ports in Kent and across Durovernum (Canterbury) and Londinium reached the town and ended at Viriconium in Shropshire near the border with Wales. Today it is known as Watling Street, a medieval name which indicated its northern section and eventually was used for the whole road. Watling is a toponym which can still be found in many places along the road including London. Unlike Colchester which stands on the site of Roman Camulodunum, St. Albans is located on high ground to the east of Verulamium, because the medieval settlement developed around the burial place of Alban, the first British Christian martyr. It was located outside the city walls, consistent with the Roman practice for burials and it became a site of pilgrimage. A Benedictine Abbey was founded in the VIIIth century, but the construction of the current abbey church began in 1077 after the Norman conquest of England. The building fell into decay after the dissolution of the abbey. In 1877 the Church of England created the Diocese of St. Albans and the abbey church became its cathedral; it was given a Gothic Revival aspect, exception made for the Norman Lantern Tower. Roman bricks in the Norman Lantern Tower of the Cathedral

The Romans introduced the use of fired bricks to Britain. After the end of the Roman rule the process for manufacturing them was lost and for many centuries the ancient buildings were dismantled to use their bricks in new constructions, e.g. at St. Botolph's Priory in Colchester or in the Lantern Tower of St. Albans Cathedral. This fact explains in part the lack of monumental remains of Roman buildings in Britain. 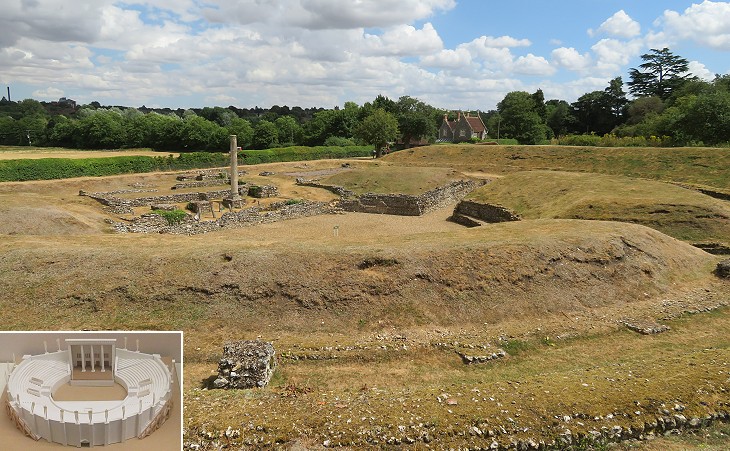 The facility was built inside the walls of the town in ca 140 AD, most likely as an amphitheatre and it was subsequently turned into a theatre with the construction of a stage. It could seat an audience of 2,000 which is an appropriate number for a theatre, but too small for an amphitheatre. It did not exploit an existing sloping ground as it often occurs in the case of theatres. It is possible that a new larger amphitheatre was built outside the walls. The first excavations took place in the XIXth century; extensive archaeological campaigns were carried out in the 1930s and 1950s. An initial museum was enlarged and redesigned in the 1990s to house the many findings of those campaigns. The very few fragments of an inscription were associated by Prof. Sheppard Frere with a long text stating that Gnaeus Julius Agricola, governor of Britain (and father-in-law of Cornelius Tacitus) built a basilica in the Forum of Verulamium in 80 AD. 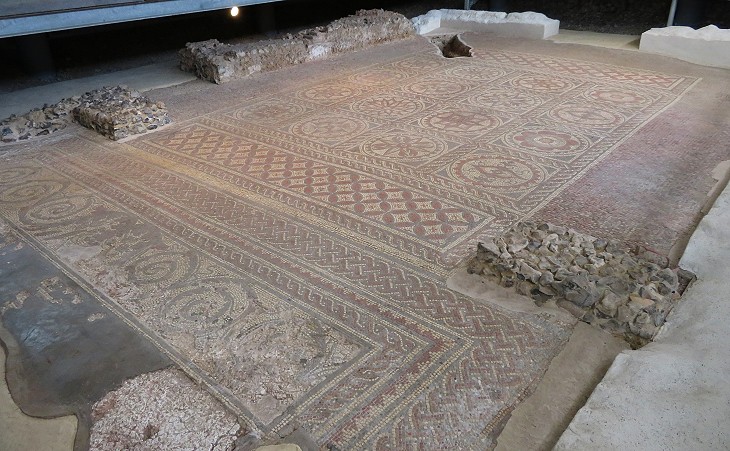 In 1932 a large Roman urban house was found in what today is Verulamium Park; the floor mosaic of a room was still in excellent condition. A hypocaust, an underground heating system, ensured a constant warm temperature. At Rome and in general in the Mediterranean countries hypocausts were mainly used for calidaria, the hot halls of bath establishments, e.g. at Ostia. The rooms of a Roman house which were far from the kitchen were heated by using braziers which created smoke and were potential causes of fire. 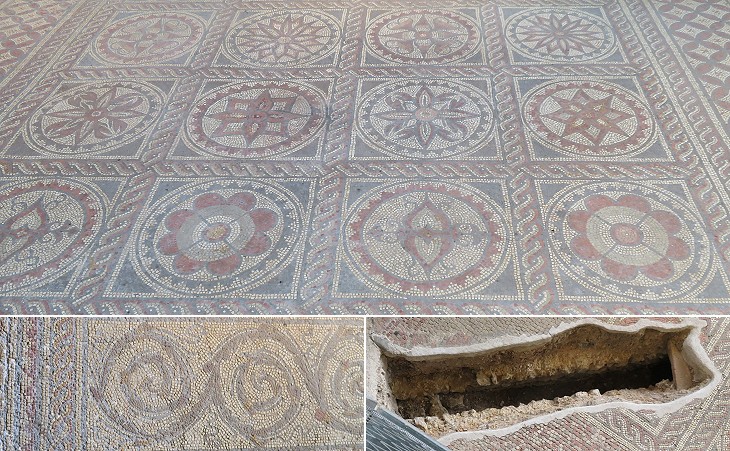 Floor mosaic in Verulamium Park: details and evidence of its heating system

Given the size and its central location the house belonged to a member of the elite of the town and most likely the room with the mosaic was where the landlord received his guests. The decoration of the floor is based on coloured geometric patterns which were very popular in the provinces of the Empire (see those at Villa la Olmeda in Spain, with the same noticeable use of red pieces), less so in Rome where very often the richest houses had black and white floor mosaics, e.g. at Villa di Livia. In general geometric patterns framed an emblema (or more than one), a small section of the mosaic which depicted a figure or a scene and was placed at its centre. In many cases the emblema was made separately from the rest of the mosaic and possibly by a pictor musivarius, a more skilled artisan. In the mosaic found in Verulamium Park the emblema does not show stylistic differences from the rest of the composition. It depicts Oceanus (who is characterized by crab claws), a popular subject (see some impressive mosaics portraying Oceanus at the Archaeological Museum of Sousse). 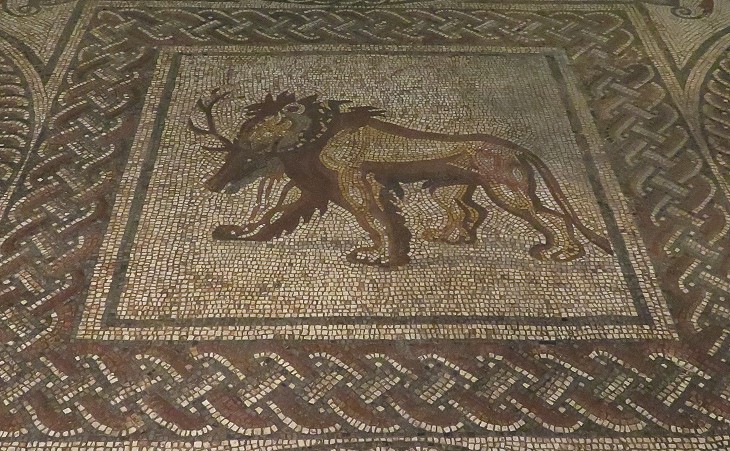 The first black and white floor mosaics in England (e.g. those at Fishbourne Palace) were most likely made by artisans from Italy or even legionaries. In the IInd century, a period for which we have many more examples of floor mosaics, workshops were established in important towns to cope with a growing demand. An analysis of the Mosaic of the Lion at Verulamium and of the Middleborough Mosaic at Camulodunum has led some art historians to suggest the existence of a workshop working for customers of these two towns which are not very far from each other. 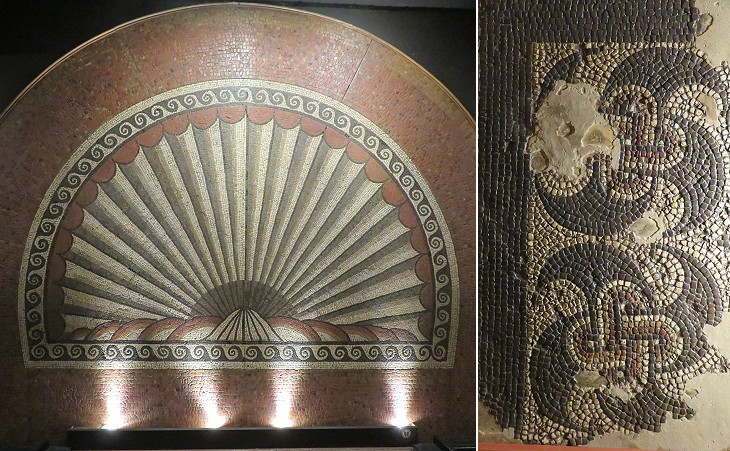 Verulamium Museum: other mosaics: see a shell in a mosaic at Philippopolis and similar Solomon's knots in a synagogue at Sardis

Some of the geometric floor mosaics which were made for the houses of Verulamium have nothing to envy to those made in other parts of the Roman Empire which are renowned for their mosaics. The Shell Mosaic most likely decorated the apse of an oecus, a hall for receiving guests, similar to what can be observed at the Roman Villa of Lullingstone and at Vienne in France and Bad Kreuznach in Germany.
The image used as background for this page shows another floor mosaic at Verulamium Museum. 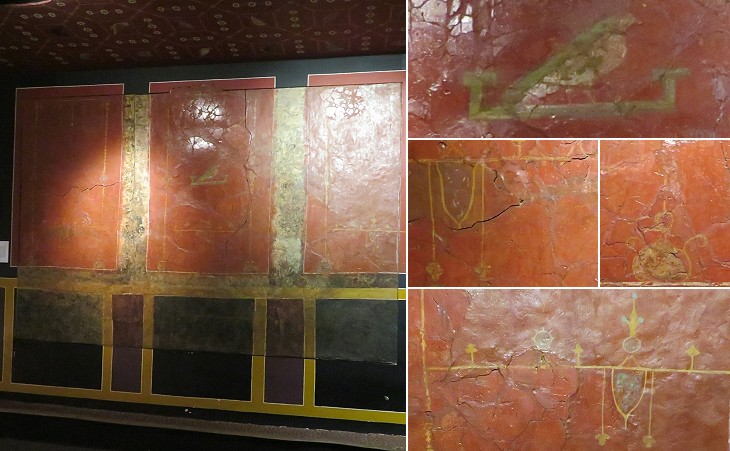 The excavation campaigns of the 1930s and 1950s identified many Roman buildings which were subsequently covered. Archaeologists were able to draw a plan of the town which had some 40 insulae (blocks of buildings). Red painted walls were found in many houses; the rooms with paintings were rather small and received little light. This feature, coupled with coloured floor mosaics, must have added to their darkness, but this arrangement was regarded as a sign of distinction and taste. You may wish to see the House of the Black Hall at Herculaneum which was painted with small objects on a black background.

British Museum: painted plaster which was found in 1956 in the courtyard of a Roman house at Verulamium (see a similar decorative pattern in a mosaic from Camulodunum)

In some instances large frescoes with complex scenes decorated the walls of Roman houses, e.g. at Villa of the Mysteries at Pompeii, but in general preference was given to decorative motifs including fake architectures on a plain background and this is the pattern which prevailed at Verulamium, even though the examples of paintings are limited. 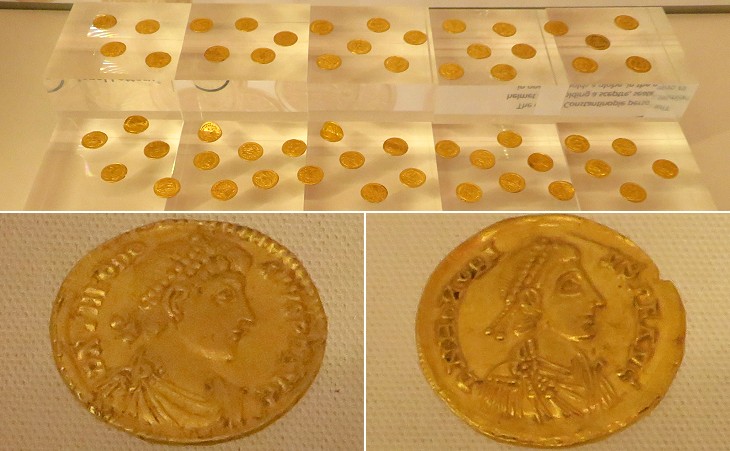 Verulamium Museum: (above) Sandridge Hoard made up only by "solidi", gold coins introduced by Emperor Constantine; (below) two coins with portraits of the emperors; they were most likely minted at Trier, see similar ones which were found in Luxembourg

In 2012 a metal detectorist found 50 gold coins in a field in the parish of Sandridge, north of St. Albans. Additional searches found other 109 gold coins. They were all minted in the period 378-408 and bore the portraits of Emperors Gratian, Valentinian II, Theodosius, Honorius and Arcadius. They were most likely hid in the turbulent years which followed the withdrawal of the Roman legions from Britain. 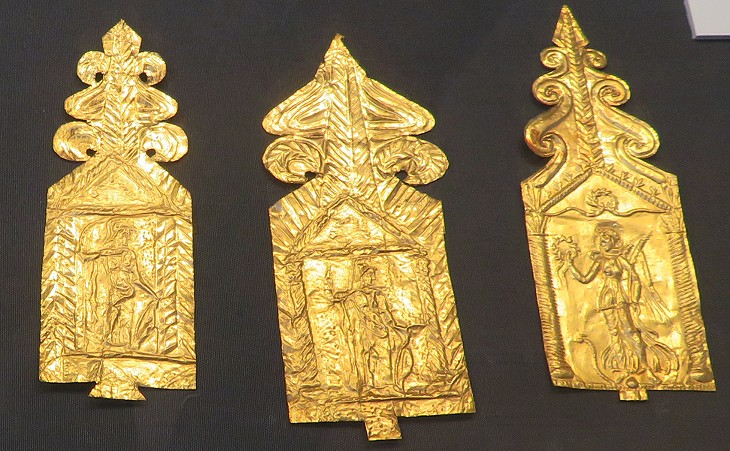 British Museum: Ashwell Hoard found in 2002 at Ashwell not far from St. Albans (see a similar votive plaque at Frankfurt)

Another hoard which was found near St. Albans did not include coins and therefore it is not easy to establish when it was hid. Objects include a suite of gold jewellery and at least 20 votive plaques of gold and silver, the treasury of a shrine to Senuna, an otherwise unknown goddess. 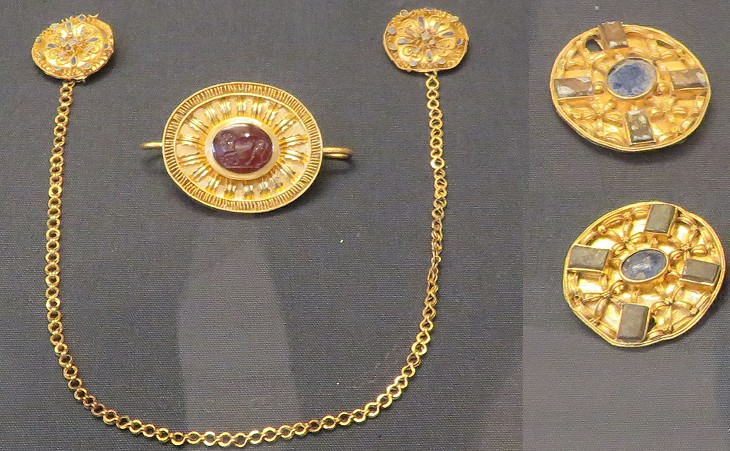