You may wish to see pages on Roman and Byzantine Thessalonica first.
In 1430 Thessalonica was conquered by Sultan Murad II; at that time the Ottomans had already conquered most of the Balkans and the city became the main port of a large territory. 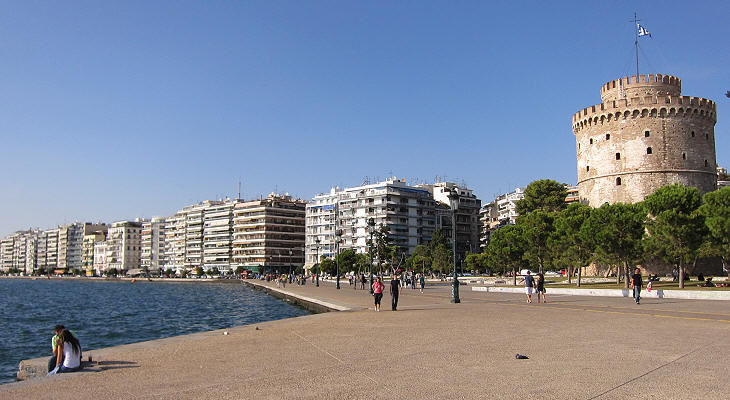 The Sea Promenade and the White Tower

The walls come very near the sea, and the boats are drawn up on the beach, there being no quay. (..) They have a great manufacture of coarse woollen cloth in and about Salonica, which is exported to all parts of Turky for the wear of common people. The English, French, Dutch and Venetians, have their consuls here, the chief export being silk, wax, and cotton to Smyrna, in order to be embarked for Europe, and a great quantity of tobacco to Italy, as well as to most parts of Turky.
Richard Pococke - A Description of the East, and Some Other Countries - 1745
The upper quarters of Salonica - which is the Genoa of the East in its position, though a great contrast to that noble city in respect of cleanliness and imposing houses - are hardly altered from what they were at the time of my last visit in 1865; but the modern quay, which has been constructed since that time, is truly magnificent, and both in its length and in the noble view over the gulf which it commands may almost rival that of Smyrna.
Henry Fanshawe Tozer - The islands of the Aegean Sea - 1890
The Ottomans did not fear enemies on land after they defeated the Hungarian and Polish armies at Varna in 1444; on sea however they did not have a comparable strength; for this reason they protected the port of Thessalonica with a fortress located at its southern end where the city walls reached the sea. The key element of the fortress was a large circular tower which is now regarded as the symbol of the city. 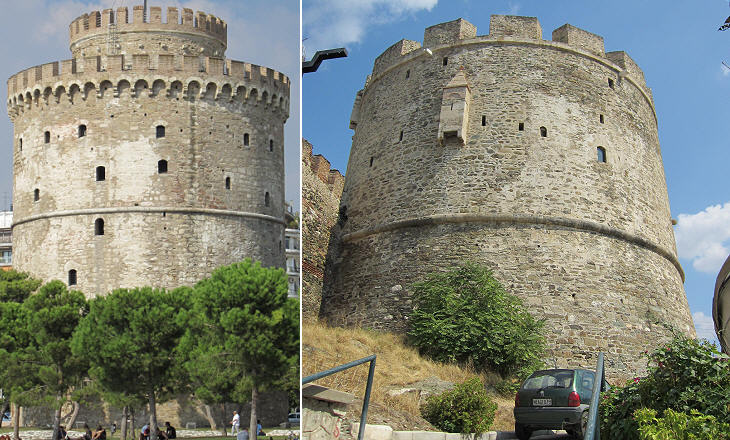 (October 1807) The form of the city approaches to a half circle, of which the diameter is described by a lofty wall, flanked with towers, extending a mile in length along the sea shore, and defended by three great towers, one at each extremity, the third overlooking the skala or landing place, where stands a small suburb, between the tower and the sea shore. Since the invention of gunpowder, batteries on a level with the water have been added to the maritime defences in the most important points, and a fortress, or fortified inclosure, has been constructed at the western angle of the city.
William Martin Leake - Travels in northern Greece - 1835
The design of the White Tower and of Dingirli Koulè, another large tower near the citadel, indicates that the Ottomans availed themselves of the experience of military architects who were familiar with Venetian fortresses. The string course or cordon is a characteristic feature of Italian fortifications. In 1826 the members of the Janissary corps in Thessalonica were imprisoned and then killed in the tower which for this massacre became known as the Blood Tower. Eventually the tower was painted white to make the massacre a forgotten event. (left) Bey Hamami (1444); (right) elements of an ancient building which were recently unearthed near Bey Hamami

The first large Ottoman building of Thessalonica was a hammam with separate sections for men and women. The baths were in use until 1968; they are located near the Roman market and their foundations probably rest on some ancient buildings. 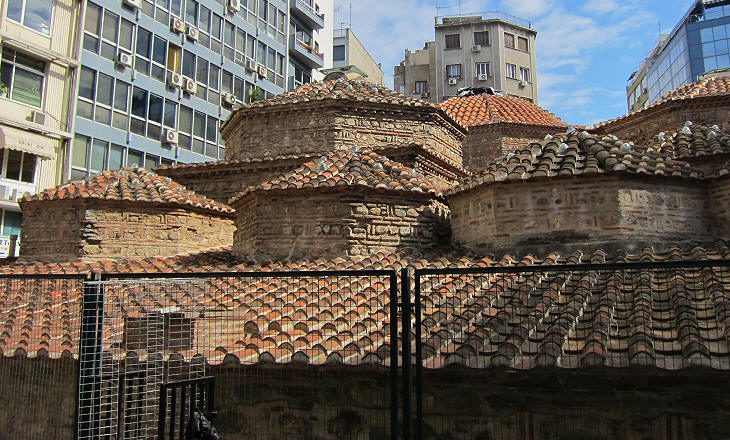 The number of Jews here is thought to exceed the number of Christians and Turks put together, insomuch that they have a great influence in the city. Pococke
The Jews of Saloniki are descended from the largest of those colonies, which settled in Greece at the time of their expulsion from Spain at the end of the fifteenth century. (..) Their best attested peculiarity is their knowledge of the Spanish language. Leake
When Sultan Murad II conquered Thessalonica after a long siege the city had a very reduced population, which was insufficient to fulfil its new role as key European port of the Ottoman Empire; towards the end of the XVth century Sultan Bayezid II welcomed the arrival of Jews from Spain and southern Italy as a means to increase the population and the importance of Thessalonica. The millet (nation) system was extended to the Jews giving their religious leaders jurisdiction on many matters; the city became the home of a very large Jewish community which in some periods was the majority of the population.
In 1917 a fire which started near the citadel was pushed by strong winds towards the Jewish quarter which was located near the harbour; only the buildings entirely built of stone did not burn completely; after the fire the quarter was entirely redesigned and its Ottoman baths are almost the only memory of its old aspect. 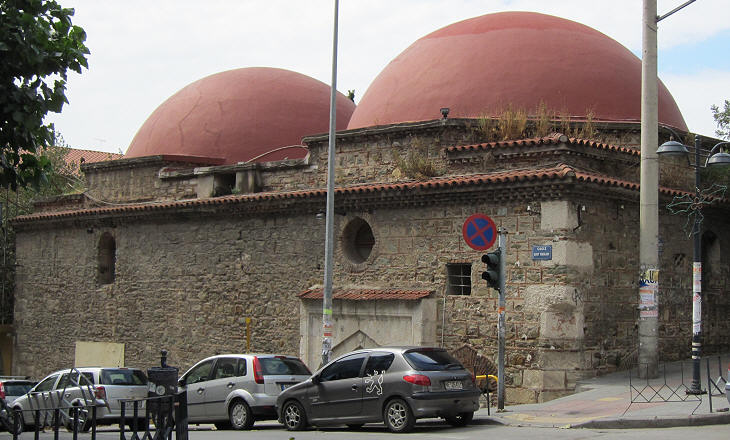 The building is now used as a cinema, but it retains its old Turkish name: Yeni means new so Yeni Hamam means new baths; also this building is located in the central area of the ancient city. It is one of seven Ottoman buildings acknowledged by the Hellenic Ministry of Culture as deserving conservation. The relatively limited number of Muslims living in the city and the fact that several large churches were turned into mosques explains why the Ottomans did not build large mosques in Thessalonica. Ishak Pacha Camii is located near Agios Dimitrios; it was built in 1484 before that large church was turned into a mosque; the prayer hall is covered by two domes, a typical feature of early Ottoman mosques and in particular of those of Bursa.
The image shown in the background of this page is based on an Ottoman inscription placed at the entrance of the Rotunda when that building was turned into a mosque.

This mosque is located near the Jewish quarter and the market of the city during the Ottoman rule; in 2010 it was being restored because its artistic and historical value was recognized by Greek authorities (the building was used as a cinema for many years). The mosque was built by the daughter of Hamza Bey, an Ottoman general whose tomb is near Cekirge in the environs of Bursa. 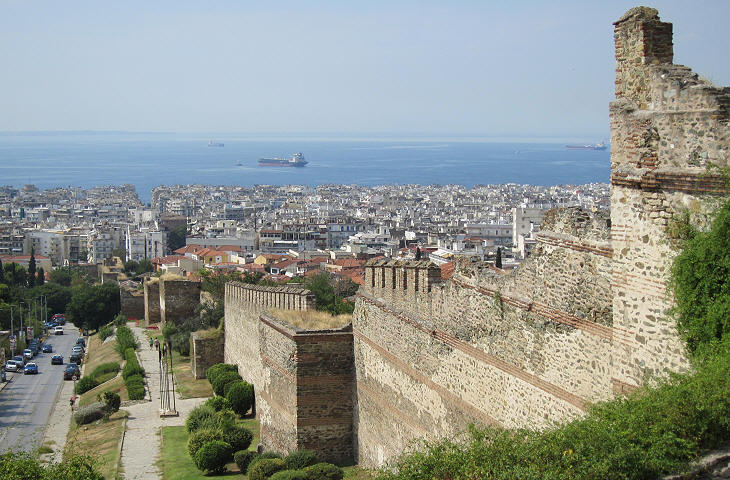 The present walls, which seem mostly to have been built under the Greek emperors, are five or six miles in circumference, taking in the plain ground on which the city now stands; it goes up to the top of the hill, and joins to the castle, the present city not taking up above half the ground enclosed within the walls, which were well repaired when the war broke out with the emperor. Pococke
The walls which surround Thessalonica were most likely built in the IVth century; the long stretch of well preserved walls between the White Tower and Dingirli Koulè was strengthened by the Byzantines in the XIVth century in the hope of keeping the city with a small garrison.

The eastern and western walls follow the edges of the height, where it falls on either side towards a small valley watered by a rivulet, and terminate above in the walls of the citadel, which has a double inclosure towards the town flanked with square towers. Leake
The ancient acropolis was surrounded by walls also on the side towards the city; these walls were maintained by the Ottomans as protection in case of riots or revolts. Today the citadel (or Kastro) is a small haven of quiet when compared to the congested city centre. The citadel, like that of Constantinople, is called Eptapyrgon, which the Turks have translated into Yeddi Kulelar, the Seven Towers; for doubtless at both places the name is older than the Turkish conquest. Leake
Eptapyrgon, in Turkish Yedikule, means seven towers, the same name of the fortress/prison near the walls of Constantinople; the building is located on the highest point of the citadel and because of its threatening aspect it was looked at with terror by the inhabitants of the city. 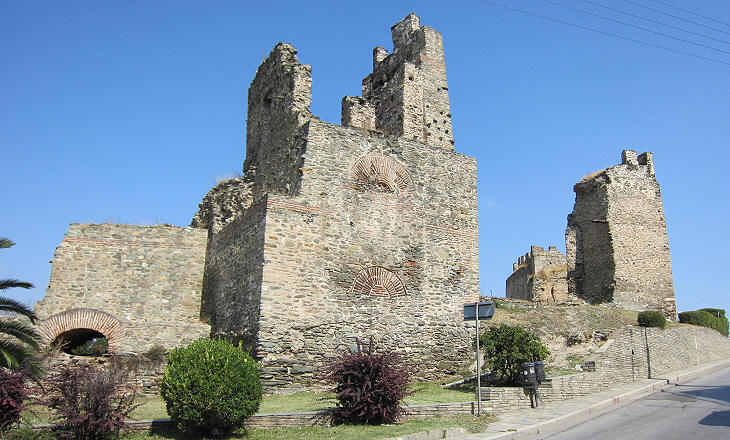 As evening came on, a beautiful effect was produced by the illumination of the minarets, of which this city boasts a great number. It happened to be the commencement of the month preceding the Ramazan, and on that evening, as on every night of the sacred month of fasting, the gallery which runs round each of these aerial structures is hung with a circlet of lamps. Tozer
In 1881 Thessalonica was the birthplace of Mustafa Kemal Ataturk, the founder of modern Turkey.
Notwithstanding all its fortifications the Ottomans surrendered Thessalonica to the Greeks in November 1912 without much fighting; in March 1913 a madman assassinated King George I of Greece during a visit he made to the city; during WWI Thessalonica housed the headquarters of Anglo-French expeditionary forces; in 1923 the Muslim population was expelled while a large number of Greeks from Anatolia were relocated to Thessalonica; in 1941 the city was occupied by the Germans who in 1943 deported the Jews, very few of whom survived the concentration camps; the city suffered heavy damage during WWII owing to Allied bombs.
Today Thessalonica has a very modern aspect, elegant shops and cafés, a long seafront promenade and highly interesting museums showing its ancient and Byzantine past.

Return to Roman Thessalonica or to Byzantine Thessalonica.
Other pages of this section:
Philippi
Kavala
Veria
Kastoria