The passage of Thessalonica from the Roman to the Byzantine era was marked in 390 by the massacre of 7,000 of its citizens in the hippodrome; this was the punishment decreed by Emperor Theodosius for riots against the Goth commander to whom he had assigned the control of the city. 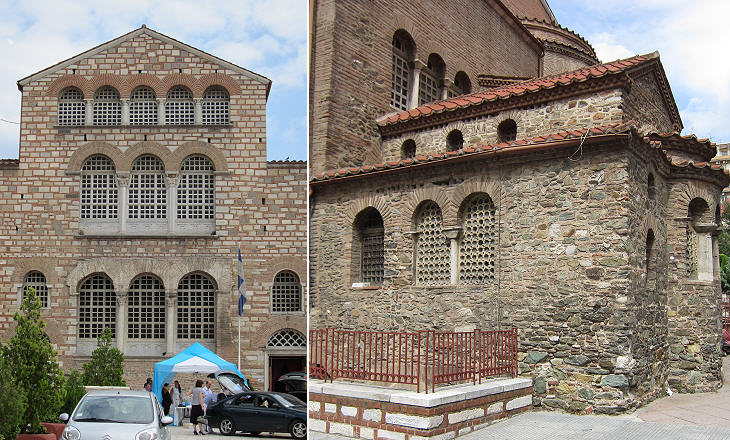 The most beautiful mosque in the town, which was a church, is that which had the name of saint Demetrius; it is seventy-one paces long, and forty-one broad; (..) there is a church under it which is shut up, and no one can enter; it is said that St. Paul preached in it.
Richard Pococke - A Description of the East, and Some Other Countries - 1745
(October 1807) St. Demetrius is a long church with a triple aisle, supported by a double order of columns of several kinds of variegated marble, and very much resembling an old Latin church, such as are seen in Italy, Sicily and the Holy Land. It may possibly have been built by the Latins when in possession of Thessalonica in the 13th century.
William Martin Leake - Travels in northern Greece - 1835
In 392 Theodosius issued a series of decrees to actually implement a 380 edict which declared the Christian faith (in its Nicene creed) the sole religion of the Roman Empire; the emperor had to face the hostility of many members of the army who were followers of Sol Invictus, a monotheist belief centred around the god Sun. This may explain why so many military saints are recorded among the martyrs; their hagiographies were widely "advertised" by the clergy in order to wear down the initial attitude of the army.
According to tradition Demetrius of Thessalonica was killed during the persecution ordered by Emperor Diocletian. A large church was dedicated to him as early as the Vth century in the centre of the ancient city. In 1917 a fire badly damaged the building, in particular its front part. 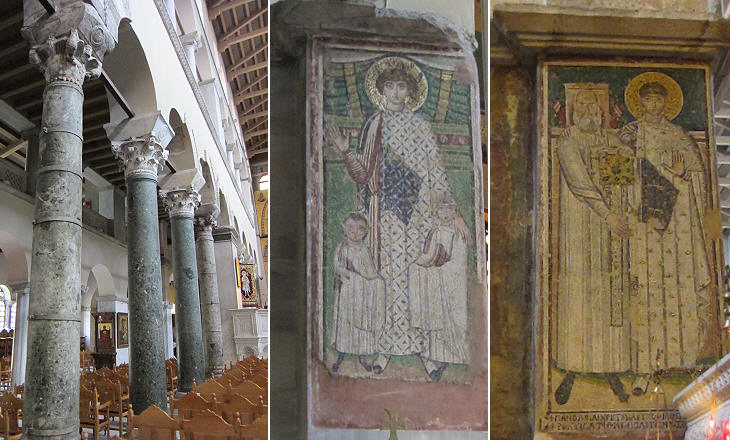 There are on each side a double colonade of marble pillars, each supporting its gallery, with pillars over them; the gallery supported by the inner rows of pillars being under the gallery of the pillars that are on each side next to the middle nave; the whole church is cased within with marble. Pococke
Demetrius is portrayed in a series of small VIIth century mosaics on the pillars near the apse; they show a young man in elegant civilian clothes, typical of the upper classes; he wears the tablion, a lozenge shaped coloured panel across the chest, which was worn by the Byzantine emperors and their closest advisers. You may wish to see a mosaic portraying Emperor Justinian with the tablion at S. Vitale in Ravenna and two martyrs wearing it in a mosaic at S. Stefano Rotondo in Rome. 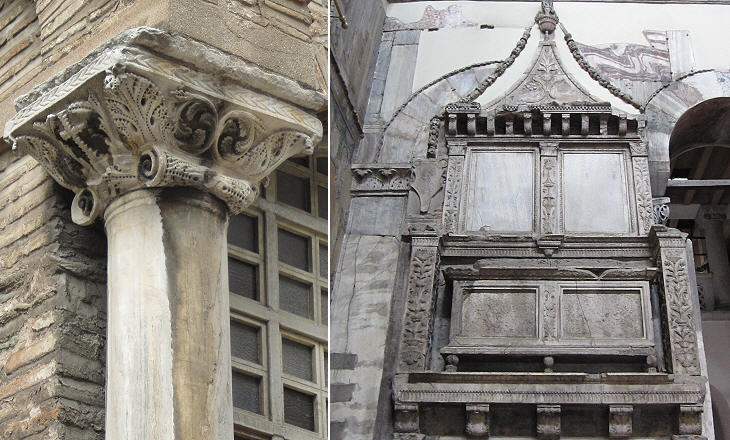 The capitals themselves, when new ones were worked, for the use of old ones was more common in the West than in the East, underwent a great change in the direction of solidity. The influence of classic models was not lost, and though the delicate undercutting and modelling of the Corinthian capital was abandoned, the hollow abacus, the volutes and rosette survived, and the acanthus leaf was employed for the foliage, generally arranged alternately in two tiers as in the ancient examples, but sometimes twisted as if blown by the wind in a very curious fashion, of which there are example in the church of St. Demetrius at Salonica.
Thomas Graham Jackson - Byzantine and Romanesque Architecture - 1913
You may wish to see similar Byzantine capitals at Philippi, Constantinople, Ravenna and Syria.
Within this temple a sepulchral marble is inserted in the wall, which very much resembles many similar monuments in Christendom. (..) It is ornamented with flowers well executed, within which is an inscription in twenty-two Greek Iambic verses, in honour of one Luke Spanduni, who is described as a scion of Byzantium and the Hellenes, and who died in the year 6989, or A.D. 1481, whence it would seem that the Turks did not deprive the Greeks of their church of St. Demetrius immediately after the conquest. Leake
In 1430 Thessalonica was conquered by the Ottomans, but Agios Dimitrios remained a church until 1491 when it was turned into a mosque and a minaret was built to the side of the façade; the mosaics were covered with plaster, but they were not vandalized; the same applied to the 1481 tomb of Loukas Spandounis, a rare example of Renaissance Italian art outside the Venetian territories in Greece; members of the Spandounis family lived in Venice and they commissioned this monument for their relative in Thessalonica; it is attributed to the workshop of Pietro Lombardo, a sculptor of many tombs in Venice and of a relief portraying Dante at Ravenna and the architect of S. Maria dei Miracoli in Venice and S. Maria Assunta at Cividale. 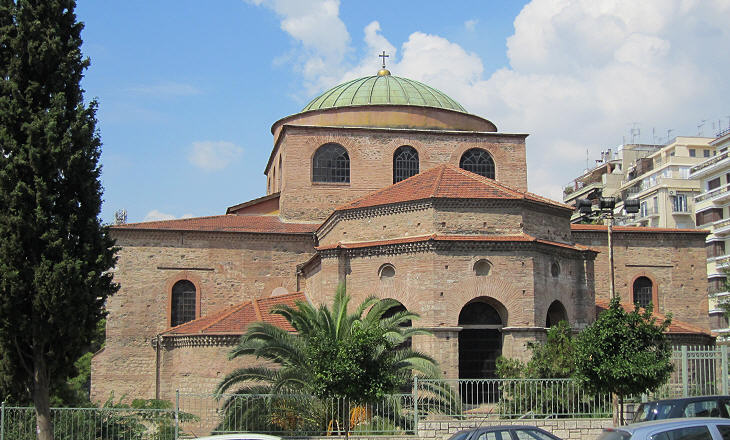 Another mosque was the church of St. Sophia, built something on the model of saint Sophia in Constantinople having a cupola adorned with beautiful mosaic work; there are some fine verd antique pillars in the church and portico; and in the church there is a verd antique throne or pulpit, with two or three steps up to it, the whole being of one piece of marble. Pococke
It is in the old cathedral of S. Sophia at Salonica that we first get the domical church on a square plan instead of the long basilica, and in its arrangements there is something tentative, as if it were an experiment. The central part of the church consists of a Greek cross, with a dome over the crossing and four barrel vaults over the arms. The eastern arm is prolonged by one bay, and finishes with an apse, which is semicircular within and polygonal without. (..) The cathedral of Salonica is no doubt the older of the two, though perhaps not by much. The latest authorities date it about 495. Jackson 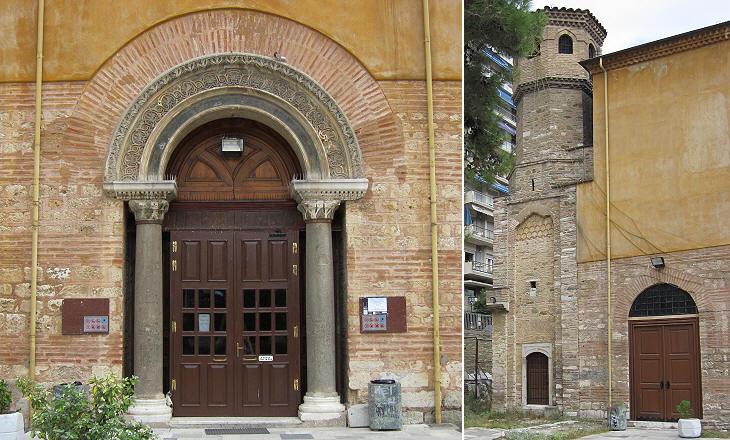 Agia Sophia was converted into a mosque in 1585, many years after the Ottoman conquest of Thessalonica; this may be due to the fact that it was located in the part of the city which was mainly inhabited by Christians. 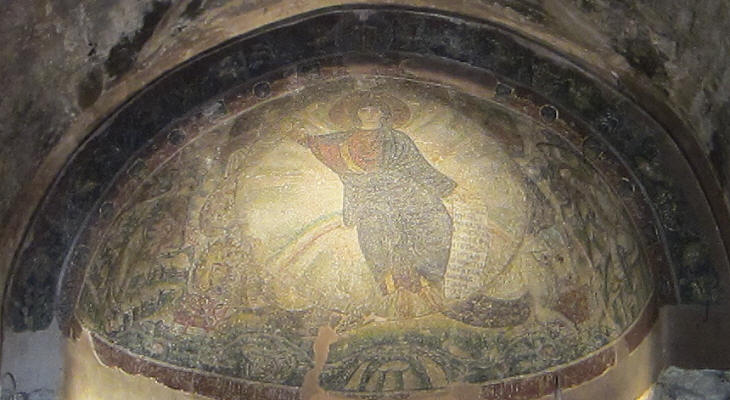 Osios David (Vth century): mosaic of the apse portraying Ezekiel's vision; Jesus Christ is portrayed as a young man without a beard, his traditional iconography in the first centuries, e.g. at S. Vitale in Ravenna

Osios David is a small and very old church in the upper part of the city which is dedicated to a local saint who delivered his speeches from a tree (a story very similar to that of St. Simeon); according to tradition the church was built by Theodosia, daughter of Emperor Maximinus; she was killed by her father when he discovered she was a Christian. 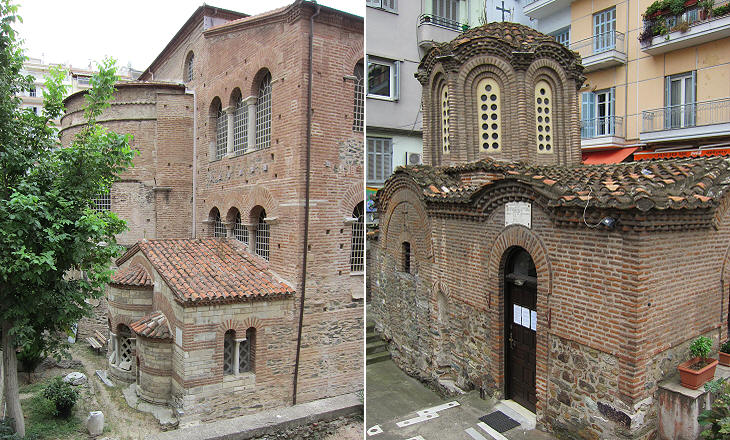 (left) Panagia Ahiropitos, because it houses a sacred image which was not painted by a human being (Eski Djami during the Ottoman rule); (right) Agios Sotir

Eski Djuma, or Old Friday, is the name of another mosque, the masonry and form of a great part of which shows that it was once a building of the same age as the Eski Mitropoli, or perhaps still older, but such have been the repairs and alterations which it has undergone in its conversion first into a church and then a mosque, that the ancient plan cannot easily be traced. It is supposed by the learned to have been a temple of Venus. Leake
Many Byzantine churches have been overly restored after the 1917 fire and in general after the city was annexed to the Kingdom of Greece in 1912. 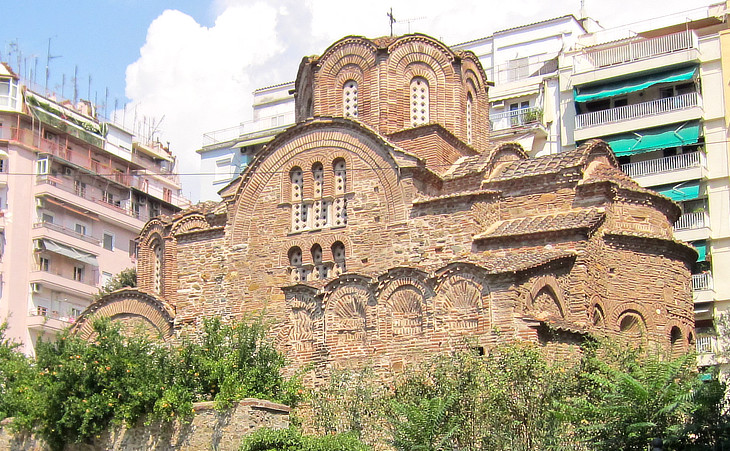 A fourth mosque was the church of saint Pantalemon; (..) before it there is a fort of suggestum or pulpit, with winding steps up to it, all of one block of white marble; on the sides of it are cut three arches, supported by Corinthian pillars, under which are mezzo relievos of the Virgin Mary, and other saints: I saw such another at one of the mosques; these seem to have been made in the very earliest times of Christianity, before the art of sculpture was entirely lost. Pococke
Many works of art have gone lost, but several Byzantine churches retain a fine brickwork decoration. 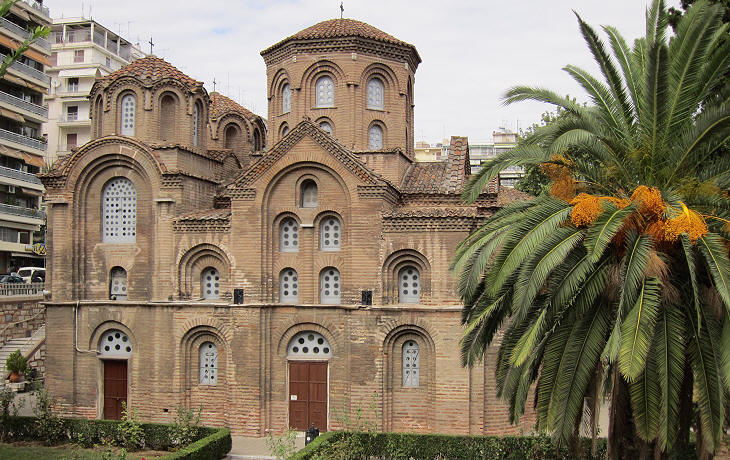 Panagia Halkeon means Our Lady of the Smiths; Halkeon is the Greek translation of the Ottoman name of the mosque which was given because the building was located near the blacksmiths' stalls in the nearby central market; it is not therefore the church of a guild; it shows a typical Byzantine design and it was built at a time when the decline of the Empire was reversed by the Comnenos dynasty (you may wish to see some churches built by the Comnenos in Constantinople). 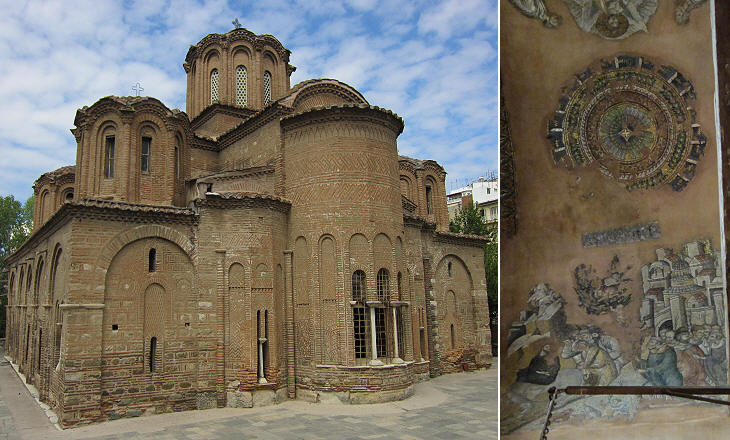 In 1204 the crusaders conquered Constantinople and partitioned among their leaders some territories of the empire, while others remained in Byzantine hands; Boniface of Montferrat became King of Thessalonica; his kingdom however did not last for a long time; in 1224 the city was conquered by the Byzantine Despot of Epirus; in 1246 Thessalonica passed to the emperors of Nicaea, who in 1261 re-conquered Constantinople.
The final period of the Byzantine Empire (1261-1453) was marked by a development of the arts which was promoted by the Palaeologus dynasty; buildings are characterized by an elaborate brickwork and are decorated with paintings which show the influence of Italian art; the image shown in the background of this page is based on a fresco of Dodeka Apostolos (you may wish to see the frescoes of St. Saviour in Chora in Constantinople). 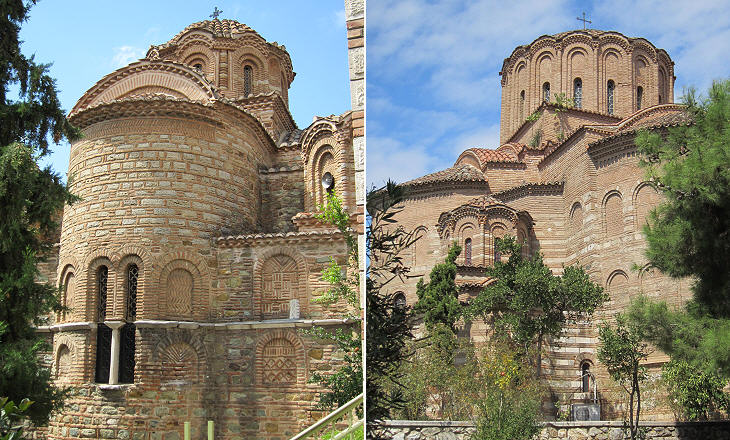 The construction of many churches in the last years of the Byzantine Empire was also due to the importance of the city as a centre of theological controversies; St. Gregory Palamas, Archbishop of Thessalonica, promoted the practice of continuous prayer in solitude and retirement to achieve knowledge of God (Hesichasm meaning stillness, quiet). You may wish to see churches of this period at Constantinople.
In 1349 the Serbs occupied Thessalonica; the Palaeologi managed to conquer the city back, but they did so only with the help of Ottoman troops; in the following years the Ottomans established their first bridgehead in Europe and started a policy of expansion in the Balkans.
At the beginning of the XVth century Constantinople was surrounded by Ottoman territories and had increasing difficulties in keeping its remaining Greek possessions; in 1424 Emperor Manuel II sold Thessalonica to Venice; this move alarmed the Ottomans who regarded the Venetians as a much more formidable opponent than the Byzantines; in 1430, when Venice was at war with Milan, Sultan Murad II conquered Thessalonica.
In 1988 the Paleochristian (i.e. the Rotunda) and Byzantine monuments of Thessalonica were inscribed in the UNESCO World Heritage List.