- The Fortifications of Rhodes
(relief in the fortress of Bodrum)

The ramparts of the medieval city, partially erected on the foundations of the Byzantine enclosure, were constantly maintained and remodelled between the 14th and 16th centuries under the Grand Masters. Artillery firing posts were the final features to be added. (..) The fortifications of Rhodes exerted an influence throughout the eastern Mediterranean at the end of the Middle Ages.
From the UNESCO synthesis of the universal value of the Medieval City of Rhodes which in 1988 was added to the World Heritage List.
As a specimen of a mediaeval fortress the existing city is almost unrivalled; and the objects that remain there, notwithstanding the ravages of time, illustrate in an impressive manner the organisation of the Order of the Knights of St. John. (..) The enormous moat, wide and deep, and faced on both sides with stone; the solid walls, with towers at intervals, forming sometimes a double, and at the highest point, where the palace of the Grand Master stood, a triple line of defence, and drawn in a horseshoe form over the sloping heights from either side of the central harbour, and along the line of the harbour itself; and the fortifications by which the moles themselves were protected - all remain unchanged, to attest the strength of this bulwark, on which for centuries the attacks of its powerful foes broke in vain.
Henry Fanshawe Tozer - The islands of the Aegean Sea. Publ. 1890, but Tozer began his travels in 1874.
The fortifications of Rhodes can be classified into three groups:
a) those built until the first half of the XVth century when attackers made use of siege engines which were not very different from those used by the ancient Romans: catapults, battering-rams, movable towers;
b) those built between 1453 (Fall of Constantinople) and 1480 (first siege of Rhodes by the Ottomans); these fortifications took into account the impact of the use of cannon by the Ottomans to breach the walls of Constantinople;
c) those built between the two sieges of Rhodes (the second one occurred in 1522); they were state-of-the-art fortifications which could withstand the most powerful Ottoman cannon.

Friday, November 24th, 1815. Rhodes has two excellent ports, a large one called the Mandraici to the north, and a smaller one called the Port (or Emporium) to the south, close to each other. At the east and west extremity of the Port stand two small round towers, which are at least 800 feet from each other, and between them on the quay is a square watch-tower about 120 feet high, the highest of the three.
William Turner - Journal of a Tour in the Levant - 1820
May 18th. 1840. Thirty hours' endurance of the sea, mostly in a scorching sun, brought us at two o'clock in the morning to the quay within the stately harbour of Rhodes. The beautiful tower, which is the striking feature of the city, commands the entrance.
Charles Fellows - An account of discoveries in Lycia - 1841
Within the memory of the present generation, however, two objects, which were among the greatest glories of the place, have been destroyed. The Tour de Naillac, which bore the name of the Grand Master by whom it was constructed, and formed a conspicuous object in views of the place as seen from the sea, rising, as it did, on the northern side of the central harbour was ruined by an earthquake in 1863. Tozer
Emporium, the commercial harbour, was protected by two towers: St Angel's Tower on its southern side was located at the end of a natural wharf; it was strengthened by Grand Master d'Aubusson who placed at its top the coat of arms of France: it is usually called Mills Tower because the wharf housed thirteen mills (only three are left); Naillac's Tower was built by Grand Master Philibert de Naillac before the development of cannon and it had the square shape of many medieval fortifications; it was badly damaged by earthquakes during the XIXth century and it was eventually demolished because it could have fallen on the ships in the harbour: one can still see the bridge which led to the tower and the walls around it.

Starting from the Christian suburb on the northern side, we have on our left the first harbour, that of the galleys, which was outside the enceinte of walls, but was defended by a strong round tower at the extremity of the mole, called the Tower of St. Nicholas, which was erected by the Spanish Grand Master, Zacosta. It has been conjectured that this fort occupies the site of the famous Colossus. Tozer
Mandraki, the military harbour and most likely the harbour of the ancient town, was protected by a tower built in 1464-1467 by Grand Master Raimondo Zacosta at the end of a natural wharf where other mills were located. The tower was turned into a small fortress by Grand Master d'Aubusson who built a bastion around it after the first siege of Rhodes.

St. Peter's Tower and nearby relief

The Knights, after having conquered Rhodes in 1308, restored the existing Byzantine walls with just minor modifications: during the rule of Grand Masters Heredia (1377-1396) and Naillac (1396-1421) the walls were almost entirely rebuilt and again modified and strengthened in the second half of the XVth century: the tower dedicated to St. Peter belongs to this period: it was built by Grand Master Zacosta in 1461-1464 during the pontificate of Pope Pius II, whose coat of arms can be seen on the tower. In addition to building new fortifications the Grand Masters placed on the walls reliefs of angels guarding the town.

After the 1480 siege the Order gained such fame that it received many donations which were used to substantially improve the town fortifications. St. George's Bastion was one of the most impressive additions: it was built with the assistance of Basilio della Scola, a military architect from Vicenza, a town near Venice. It had cannon batteries also at the ground level to hit the assailants at short range. You may wish to see the Roman palace of the Knights.

It requires about one hour to walk round the walls of the city, which remain nearly entire, with a trench about seventy feet wide, now dry. The city is surrounded by a burying-ground about an hour and a half in circuit, and on the borders of this are the suburbs. Turner
The Tower of Spain is associated with an episode which occurred during the 1522 siege which I was told by Mr Vangelis Pavlidis:
"Early in the morning of September 24 1522, the Ottomans launched a simultaneous massive attack on the sectors of Spain, England, Provence and Italy. By mid-day the Janissaries had managed to take the Tower of Spain and plant their banners on the ramparts. It all seemed lost and the Grand Master himself rushed to the site with reinforcements. Finally, Fra Jacques de Bourbon with a few knights made their way through some underground passages and succeeded in recapturing the tower." 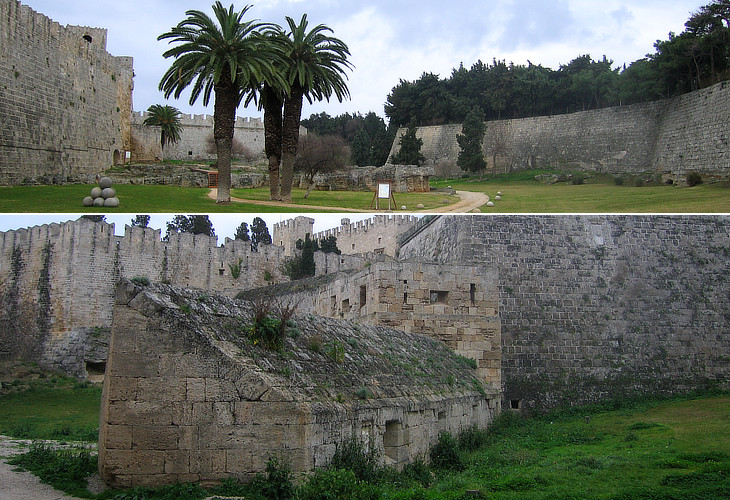 (above) Moat; (below) casemate near D'Amboise's Gate

After crossing the moat, we find ourselves at the point where the portion of the wall which was defended by the English met that which was allotted to the 'Tongue' of Provence; for the latter and that of Italy extended from this gate to the sea on the further side of the great harbour (..) The intermediate space was defended by Spain, Auvergne, and Germany, while the French were responsible for the long line which reached to the sea at St. Paul's gate, and Portugal undertook the defence of the harbour and its adjacent towers. Tozer
One of the most spectacular features of the fortifications of Rhodes is the very large moat surrounding the city: to ensure the enemy could not easily fill it, the ground on the opposite side was contained by a counterscarp, a massive wall which was difficult to dismantle. In the moat itself the Knights built low casemates projecting from the walls from which cannon and guns could be fired.

During the 1480 siege the Ottomans managed to breach the walls in their south-eastern section: they then launched an assault which was fought with cold steel: three hundred janissaries (the élite Ottoman troops) managed to enter the town, but the knights led by Grand Master d'Aubusson and protected by their armour checked the bulk of the Ottoman army and eventually repelled the attackers. It was the final episode of the siege: the Ottoman losses were so high that the siege was lifted. Grand Master Fabrizio del Carretto gave his name to the huge round bastion which was built on the site of the breach. 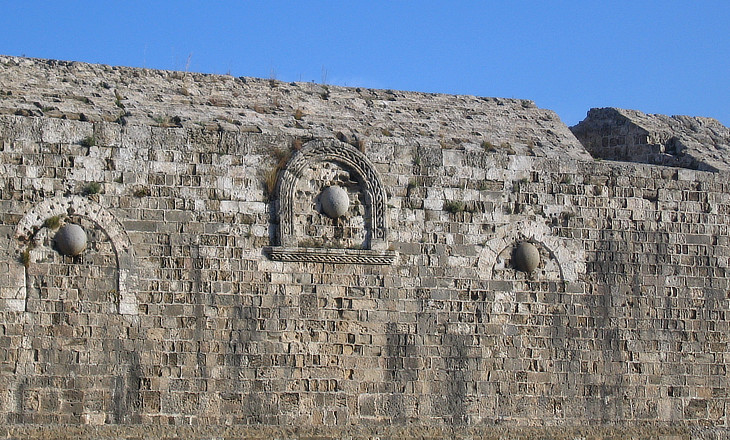 About all of the city are lying an immense number of stone balls of which I found the largest to measure in diameter twenty-six inches: there are no cannons in Rhodes, capable of carrying a ball like this, and I am told here that these were thrown against the city from Balistas by the ancient Greeks to confirm which they shew many of them built in the wall. (..) It appears much more probable that Sultan Solyman, who is known to have exerted all his force to take the island, should have brought against it the cannon made by his predecessor, Mahomet II., which were afterwards carried back. Turner

Another example of the fortifications built after the first siege is a long rampart in the middle of the moat: the knights could reach it via underground passages which could be blown up easily if the enemy managed to conquer the rampart. The development of such new fortifications led to a change in siege techniques: cannon did not throw explosive devices, but just heavy stones which had limited impact on the new bastions. The only way to significantly damage them was to place explosives at their base and so the Ottomans excavated tunnels for this purpose. Siege war became a matter for engineers. You may wish to see the fortifications which the Knights built at Valletta, their new capital on Malta after 1565.

The image used as background for this page shows the coats of arms of the Order and of Grand Master d'Aubusson (northern stretch of the walls).