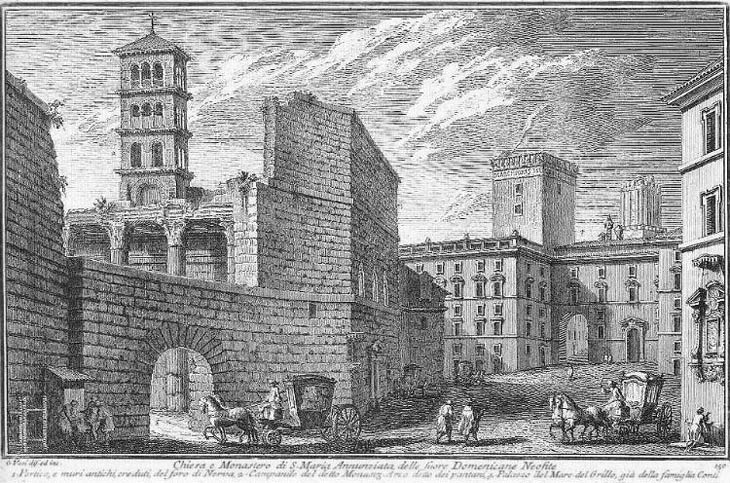 Giuseppe Vasi included this 1758 plate in the book covering the nunneries of Rome, but he depicted only the bell tower of S. Maria Annunziata, the church of a Dominican nunnery that gives the title to the plate. The main objective of the view was to show Palazzo del Marchese del Grillo and the impressive wall of peperino blocks which surrounded the northern side of Foro di Nerva (more correctly Foro di Augusto). By doing this he increased the chances of selling many copies of the plate which could be purchased as an individual item.
The view is taken from the green dot in the 1748 map below. In the description below the plate Vasi made reference to: 1) Ruins of Foro di Nerva; 2) Bell tower of the nunnery; 3) Arco dei Pantani; 4) Palazzo del Marchese del Grillo. 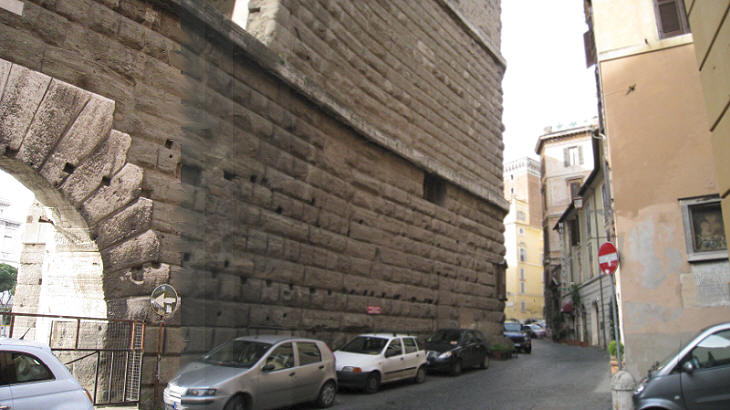 Vasi did not hesitate to enlarge the small street flanking the walls to better show Palazzo del Grillo. In 1926, in the frame of extensive excavations at Foro di Augusto, the nunnery, the church and the bell tower were pulled down and the passage through Arco dei Pantani was closed.
The house with the sacred image in the lower right corner of the plate was modified in the XIXth century. 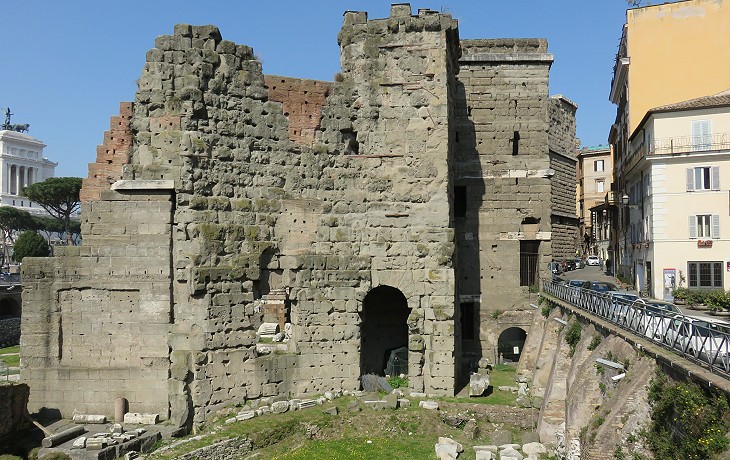 In antiquity this arch was the northern entrance to Foro di Augusto. Vasi calls it Arco dei Pantani (swamps) because the area used to be flooded owing to the lack of maintenance of the draining system which was developed in the early stages of the expansion of Ancient Rome. The columns belong to a temple built by Emperor Augustus to fulfil a vow he made during his war against Caesar's murderers. It was dedicated to Mars the Avenger. 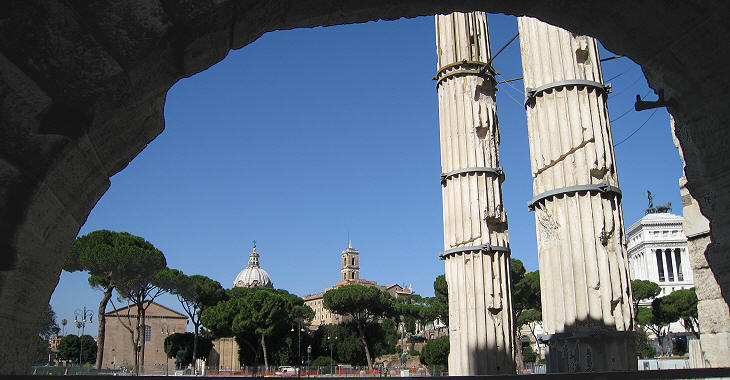 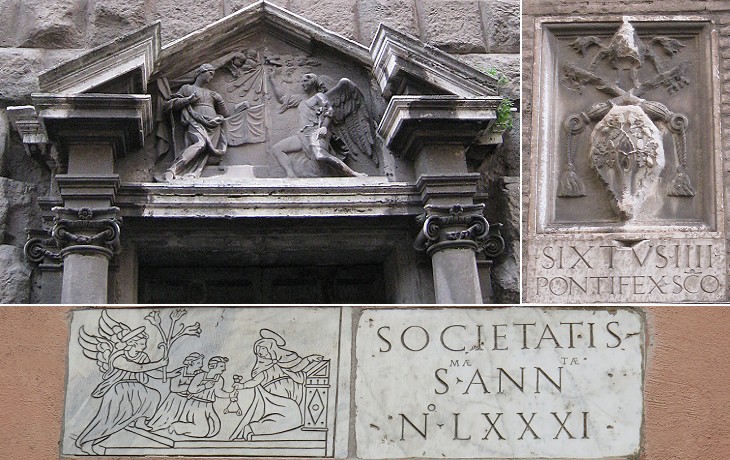 (left-above) XVIIth century relief above the entrance to the church; (right-above) coat of arms of Pope Sixtus IV which was in Via Alessandrina; (below) property tablet on a nearby building which belonged to the nunnery

In 1566 Pope Pius V assigned a large building which incorporated ancient Roman structures to an institution run by Dominican nuns which was aimed at assisting Jewish women who converted to the Christian faith. Because the number of conversions was very low the scope of the institution was enlarged to cover in general all young women in need of help (whom received a small dowry as shown in the property tablet). The building retains several coats of arms which celebrate changes made during the XVth century when it belonged entirely to the Knights of Rhodes.

The plate shows in the right lower corner an elaborate madonnella. The painting is still there, but the baroque frame is lost. The inscription was added in 1797 and it granted 200 days of indulgence to those who devoutly prayed. It is one of several sacred images which wept when Napoleon invaded the Papal State. In the XIXth century a second sacred image (a copy of that at S. Maria del Buon Consiglio at Genazzano) was placed inside a small chapel on the right side of the street leading to Palazzo del Grillo. 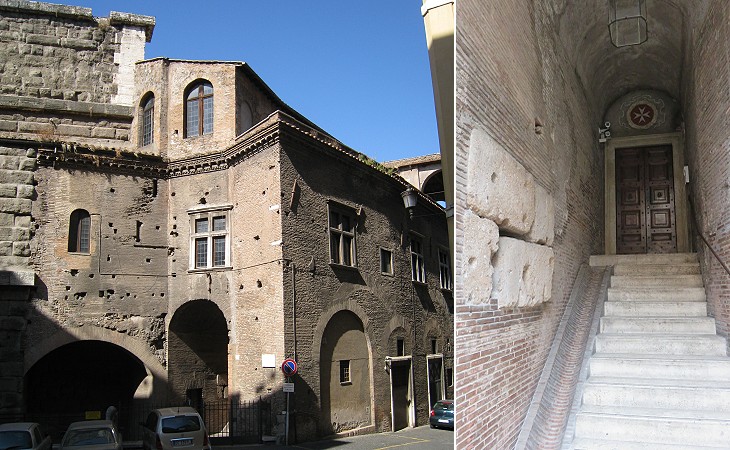 In 1466 Pope Paul II assigned a sort of patronage over the Order of the Knights of Rhodes to Cardinal Marco Barbo, one of his relatives. The Cardinal promoted an extensive modernization of a property of the Order at Foro di Augusto (see the side of the building overlooking the ancient ruins). The windows are very similar to those of Palazzo Venezia which was being completed by Cardinal Barbo. At the end of the XVIth century the Order chose to relocate to another property on the Aventine hill.
In 1946 the part of the building which was not pulled down because of the excavations was assigned again to the Order (Knights of Malta after the 1522 loss of Rhodes). In addition to these two sites the Order owns a historical palace in Via Condotti. One of the halls of the building was turned into a small church (S. Giovanni Battista al Foro di Augusto). Its travertine arches were part of an ancient open courtyard which was closed in the late XVth century to utilize its space as a hospital. 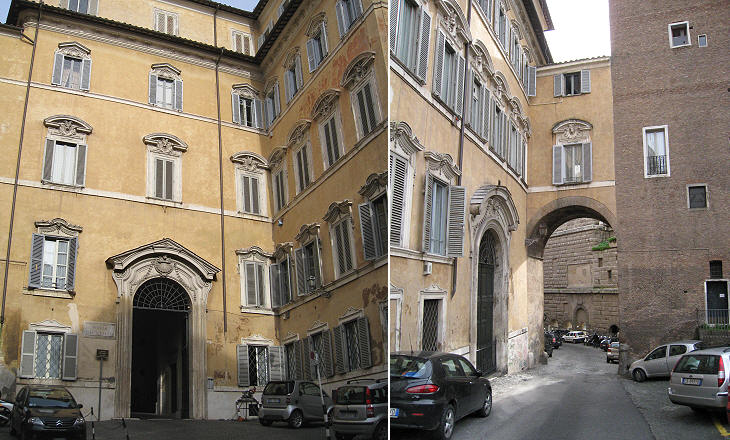 The plate shows two towers which both belonged to the Conti family: the more distant one is now known as Torre delle Milizie, the nearer one in 1675 was sold to the Del Grillo family and it was included in a large complex of buildings. The Conti had a third tower near Foro di Nerva. A few years later the Del Grillo bought the fiefdoms of Trevignano and Anguillara from the Orsini and Monterotondo from the Barberini. 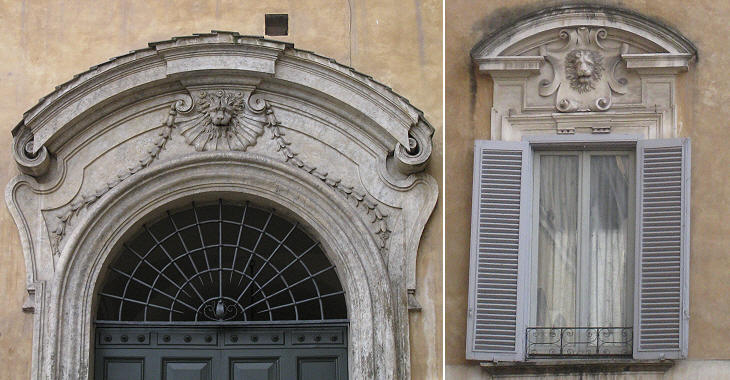 (left) Side entrance; (right) a window

There is uncertainty about the architect who designed the palace; the attribution to Carlo Rainaldi of the design of the two portals is doubtful. The very varied decoration of the windows and of the cornice was completed at a later period (another detail can be seen in the image used as background for this page). 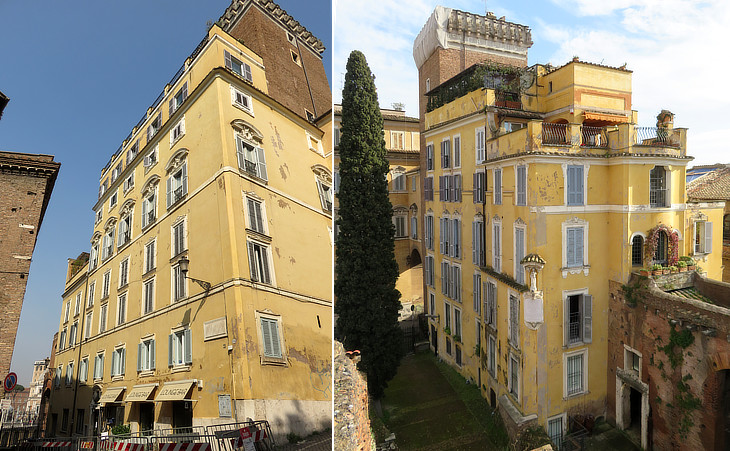 (left) Section of the palace along Via di Campo Carleo; (right) rear side seen from Mercati di Traiano

The del Grillo (cricket) are best known for a member of the family who behaved in a very extravagant way and enjoyed playing pranks. His life inspired a 1981 movie (wikipedia entry - it opens in another window), which is still very popular in Rome.