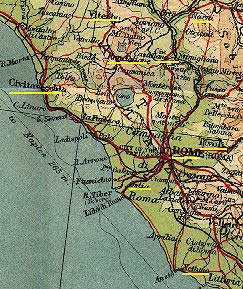 Clickable Map of the Fortresses in Latium and Southern Umbria

This map shows the towns where the Popes built the fortresses you see in this page (Castiglione del Lago and Spoleto - a separate page are further north). Very often these fortresses are called la "Rocca", this name being used when the castle is on top of a hill. Northern Latium and Umbria are the areas where almost every town has a Rocca. Some of them have been used as prisons until very recently.

The fortress and its coats of arms

During the period when the Popes left Rome for Avignon most of the towns of their Italian possessions fell under the rule of local families as was the case in other parts of Central and Northern Italy. Cardinal Gil de Albornoz was charged with the task to reconquer at least the areas closest to Rome to pave the way for the return of the Pope.
He did not only achieve this, but he also laid down the basis for keeping his conquests by building fortresses in strategic positions. Narni, an important medieval town worth a visit, commands a narrow gorge of the Tiber, a key passage from Latium to Umbria and here Cardinal Albornoz built an imposing fortress which still retains the coats of arms of Pope Urban V and Gregory XI, the last two Popes who lived in Avignon. The coats of arms are among the oldest ones and they show both the keys and the triregnum (the crown of the pope) as separate entities. The fortress was strengthened in the early XIVth century. 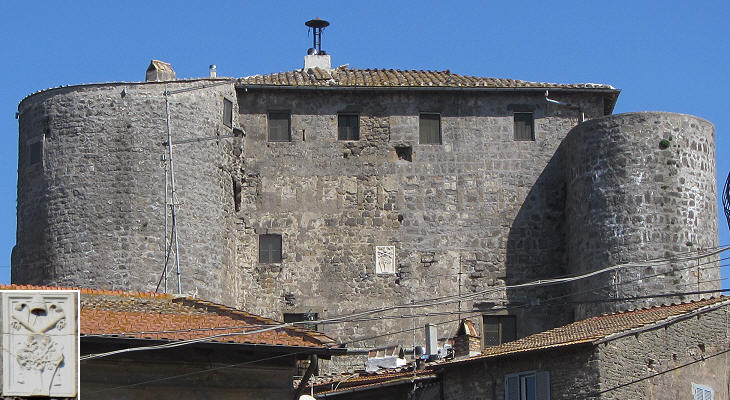 The fortress from a long distance

On the border of the small Lake of Vico, one of the three volcanic lakes of Northern Latium, Ronciglione has an open view from the sea to the inner valleys. A domain of the Anguillara family, it was reunited to the Papal State in 1469 and Pope Sixtus IV erected in the centre of the little town this menacing fortress and left several coats of arms with his oak to celebrate the glory of the Della Rovere. 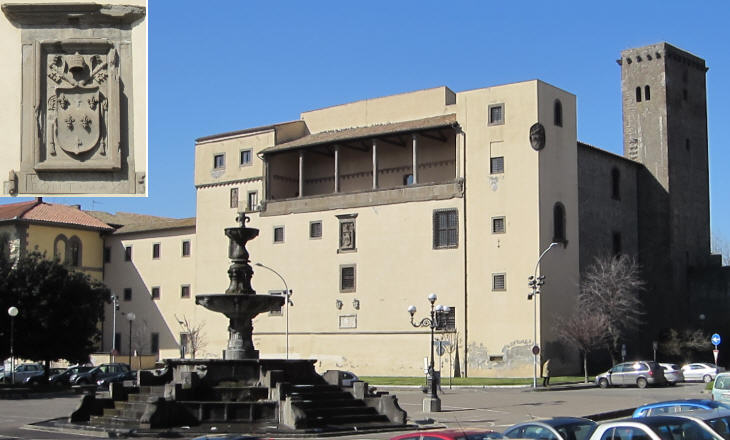 The fortress in one of the main squares of the town

Viterbo in the second half of the XIIIth century is perhaps the most important town in the Papal State. Viterbo, a town protected by imposing walls, was where the Popes spent long periods of time and where they often were elected. Cardinal Albornoz built here another fortress, which we can now see after Renaissance restorations and embellishments as the loggia clearly shows and the coat of arms of Pope Paul III confirms. 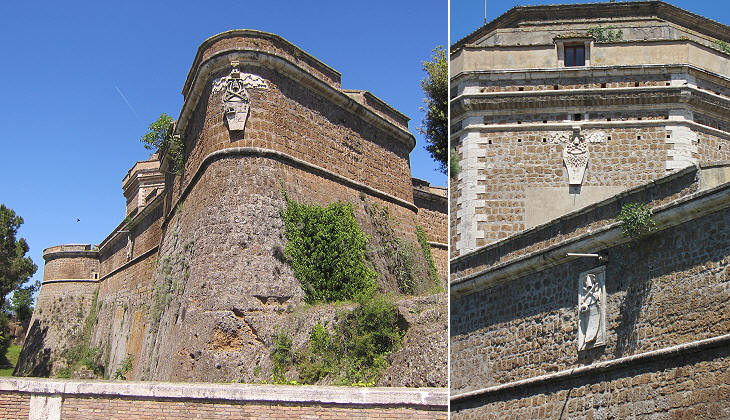 A bastion and the keep

This fortress of Civita Castellana was also known as "The Bastille of the Popes" as Italian patriots were imprisoned here in the XIXth century. On the Tiber Valley, immediately north of Monte Soratte this fortress was built by Pope Alexander VI and completed by Julius II who entrusted Antonio da Sangallo (the Elder) with the erection of the octagonal keep. It's a masterpiece of military architecture, still very well preserved. 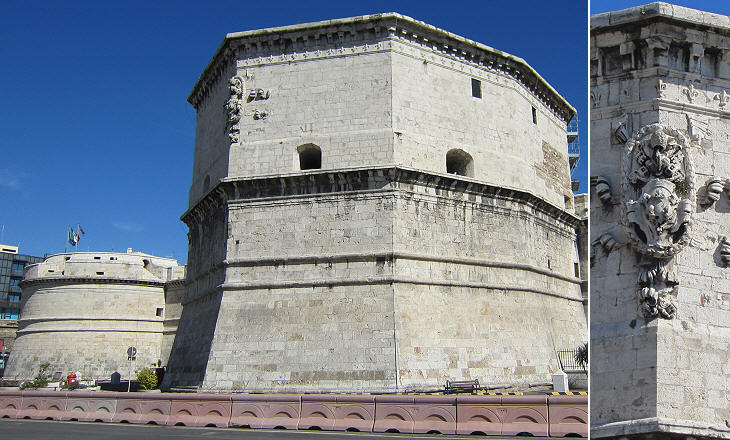 Civitavecchia is the port of Renaissance and today's Rome while Ostia Antica was the port of Ancient Rome.
Julius II asked Donato Bramante to design a brand new fortress to protect the harbour. The work was completed by Antonio da Sangallo (the Younger) during the pontificate of Paul III. The result is of great elegance and the Farnese symbols, although incongruous to a fortress, add to it. 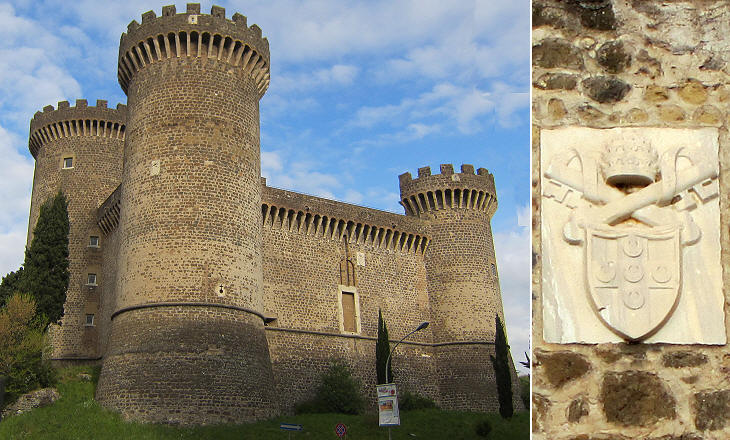 Tivoli, an important town in Roman time, retained its role of sentinel of the East also during the Popes' rule. The castle was built by Pope Pius II and retains the name of Fortezza Pia. The five little moons of the Piccolomini are one of the most intriguing coats of arms. 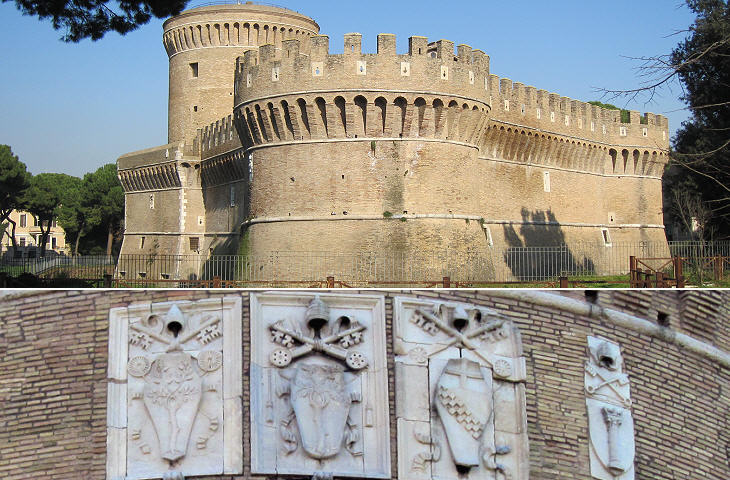 Wherever you are on the shores of Italy you can see a tower or a castle and once you reach it another one comes into view. The Saracens (Arab corsairs) and later on the Algerian corsairs were the terror of the people who lived along the coast for nearly a thousand years. Rome itself was sacked in 846 by the Saracens who landed in Ostia and the Popes were scared this could happen again, so they all contributed to the security of Rome by reinforcing its early defence in Ostia by building a fortified town (Gregoriopolis). A castle was built at the end of the XVth century by Baccio Pontelli for Julius II (at the time Cardinal Giuliano Della Rovere). It is decorated with the coats of arms of (left to right) Sixtus IV, Julius II, Innocent VIII and Martin V. 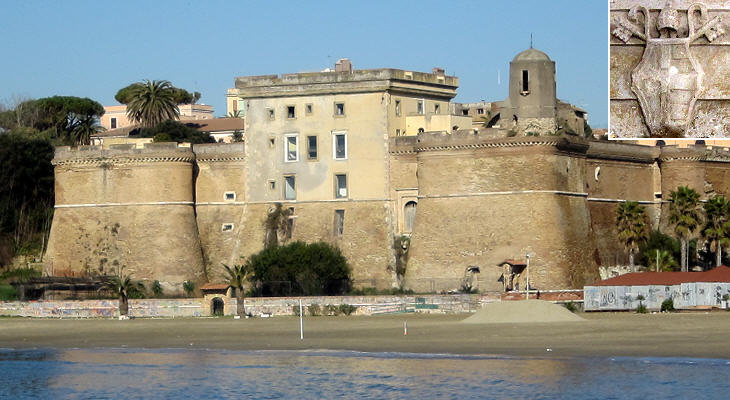 The land between Albano and the sea, south of Rome, was covered by marshes. Nettuno on the sea at the very edge of the marshes assured defence on this flank. Pope Alexander VI entrusted Antonio da Sangallo the Elder with the task of tranforming an existing tower into a fortress. 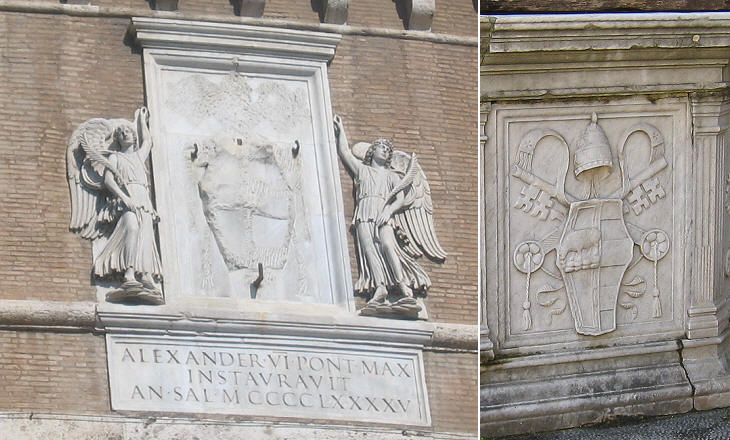 Originally the tomb of Emperor Hadrian (Mole Adriana), it became one of the fortresses of Rome during medieval times and eventually the fortress of the Pope, due to its proximity to the Vatican. A direct link (il Passetto) allowed the pope to seek refuge here. Alexander VI was one of the Popes who most contributed to the reinforcement and embellishment of the fortress. However his coat of arms on the exterior of the building was erased by French troops in the early XIXth century. So to see the Borgia's heifer (the cow shown in his coat of arms) one has to go inside the building (now a museum) where several of his coats of arms are displayed. 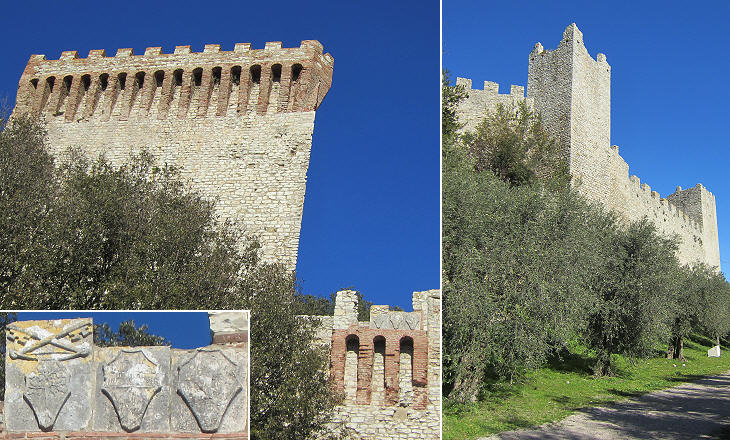 Castiglione del Lago lies on a little hill on the shores of Lake Trasimeno, close to the border with Tuscany. Pope Julius II strengthened an existing medieval fortress to prevent attacks from Florence. His coat of arms can still be seen near the highest tower.
Today the olive trees all around the ancient walls speak of peace.