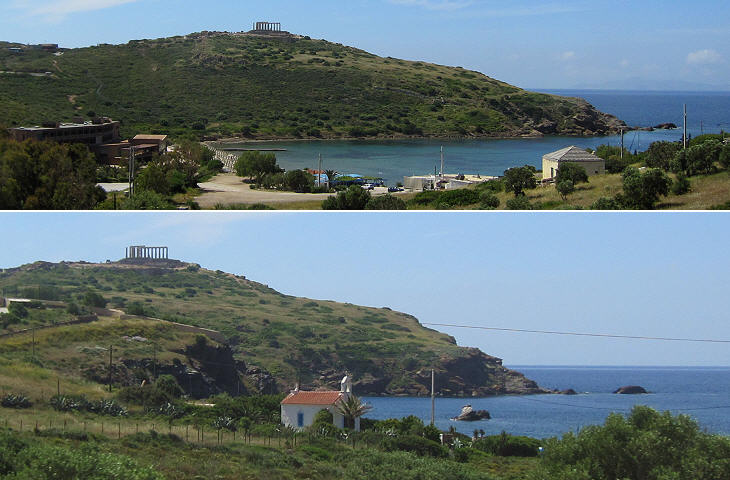 Views of Cape Sounion from the road from Athens

Our attention had been for some time agreeably engaged by the classical country, which surrounded us, and we were now near Sunium or Cape Colonne and the coast of Attica. At eleven we had a distinct view of the ruin of the temple of Minerva Sunias on the promontory, and by the help of a reflecting telescope could count the number of the columns then standing. (..) Cape Sunium is steep, abrupt, and rocky. On it is the ruin of the temple of Minerva Sunias, overlooking from its lofty situation the subject deep, and visible from afar. (..) The waves, on our arrival near the promontory, broke gently, with a hollow murmur, at the foot of the rock beneath the temple. (..) We anchored within the cape in the port of Sunium, near three hours before mid-day; and landing, ascended to the ruin. Meanwhile our sailors, except two or three who accompanied us, stripped to their drawers to bathe, all of them swimming and diving remarkably well.
Richard Chandler - An account of a tour made at the expense of the Society of dilettanti - 1775
The temple on the promontory of Sounion was thought, during most of XIXth century, to be dedicated to Minerva but it is now known that it was dedicated to Poseidon, God of the Sea, a more appropriate dedication, considering its position.
Poseidon is the "bad guy" of Homer's Odyssey and in general of the Greek myth. A brother of Zeus and Hades he won the sea when the three drew lots in a helmet (Zeus had the sky and Hades the underworld). When angered he struck the earth and the sea with his trident causing earthquakes and storms. 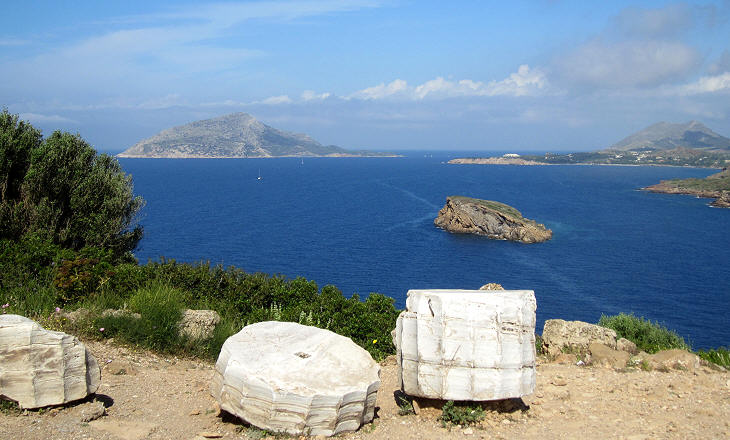 View towards Patroklos Island and the southern coast of Attica

The site, which has been long deserted, is overrun with bushes of mastic, low cedars, and evergreens. (..) We embarked on the second evening after our landing at Sunium, and setting sail, passed very near to a small island called Gaitharonesi, a naked rock, except a few bunches of thyme; not even a shrub growing on it; the cliffs inhabited by wild pigeons. It once bore the name of Patroclus. Chandler
Although the god of the sea, Poseidon craved earthly kingdoms and he competed with Athena to become the patron of Athens. He thrust his trident on the Acropolis where a well of sea-water immediately gushed out; Athena planted the first olive-tree beside the well. Poseidon, in a fury, challenged her to single combat, and Athena would have accepted had not Zeus interposed and ordered them to submit the dispute to arbitration. (..) Zeus himself expressed no opinion, but while all the other gods supported Poseidon, all the goddesses supported Athena. Thus by a majority of one, the court ruled that Athena had the better right to the land, because she had given it the better gift. From Robert Graves - The Greek Myths.
You may wish to see a Roman floor mosaic depicting the contest in Tunisia. 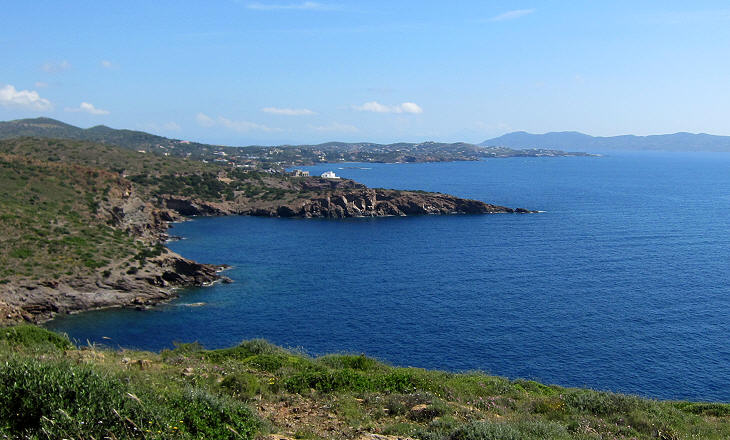 Sailing on, we had on our right hand the mountain Laurium, formerly noted for silver mines. Chandler
In the VIth century BC the Athenians, in order to retain the protection of ill-tempered Poseidon, dedicated a sanctuary to him at the end of Attica, the peninsula where Athens is located. The area was of great importance to them, because of its silver mines which granted the city its wealth.
The site chosen for the sanctuary was a cape which was the first to be seen by ships sailing from the Aegean Sea towards Piraeus, the port of Athens. Sailors were particularly devoted to the sanctuary which was a very useful landmark and signalled that they were about to reach their destination. 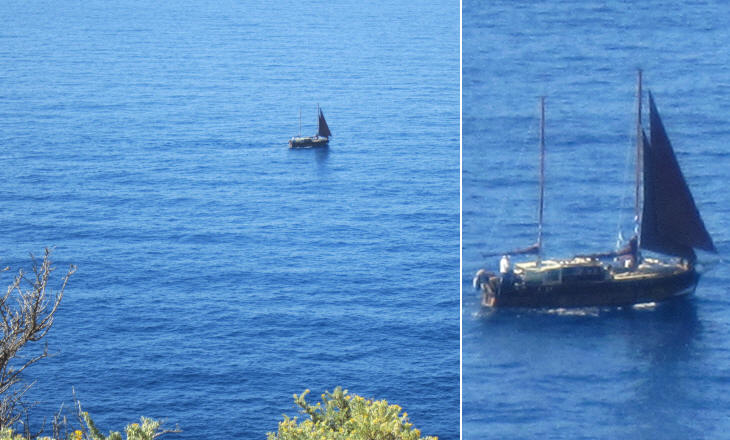 Reliving the Myth (a boat with black sails seen from Cape Sounion on May 18, 2011)

Aegeus, king of Athens, came to this cape to wait for the return of his son Theseus from Crete. The Athenians were required to send seven youths and seven maidens every ninth year to the Cretan Labyrinth, where the Minotaur waited to devour them. Theseus offered himself as one of the victims in the hope of killing the Minotaur with his bare hands and having the cruel burden remitted. On previous occasions the ship which conveyed the victims had carried black sails, but Theseus was confident that the gods were on his side, and Aegeus therefore gave him a white sail to hoist on his return, in signal of success. Theseus did manage to kill the Minotaur and returned to Athens after stopping at Delos to sacrifice to Apollo; he forgot however to hoist the white sail; Aegeus sighted the black sail and cast himself into the sea, which was thenceforth named the Aegean Sea. From Robert Graves - The Greek Myths. 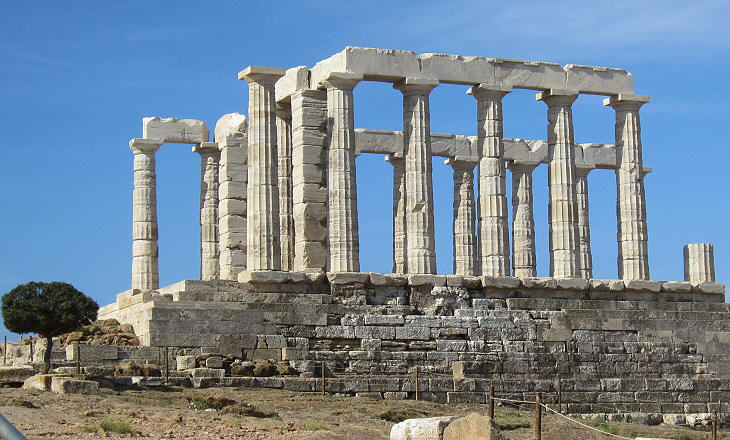 Northern side, also in the image used as background for this page

The temple of Minerva Sunias was of white marble, and probably erected in the same happy period with the great temple of Minerva called the Parthenon in the acropolis at Athens or in the time of Pericles, it having like proportions, though far inferior in magnitude. The order is Doric, and it appears to have been a fabric of exquisite beauty. Chandler
The temple to Poseidon was rebuilt in 444-440 BC after it had been destroyed by the Persians. It is therefore a monument of the Golden Age of Athens, the period of the Vth century marked by the leadership of Pericles. The north-eastern side of the complex of buildings composing the sanctuary was protected by walls and towers; the other sides were protected by high cliffs. 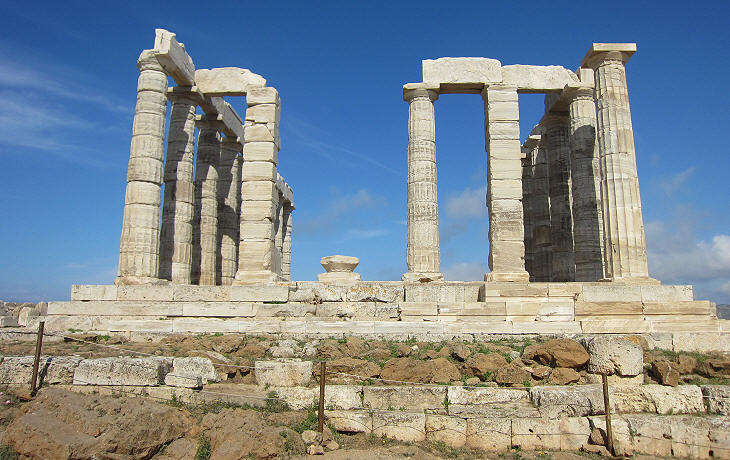 It had six columns in front. Nine columns were standing on the south-west side in the year 1676, and five on the opposite, with two antae or pilasters at the south end, and part of the pronaos. The number is now twelve, besides two in front and one of the antae; the other lying in a heap, having been recently thrown down, as we were informed, by the famous Jaffier Bey, then captain of a Turkish galeote, to get at the metal uniting the stones. Chandler
The temple stood on a high podium which increased its visibility. It was built in Doric style, but its fluted columns have sixteen grooves, rather than the usual twenty, perhaps to reduce the impact of erosion; it had 34 columns, of which 16 are still standing. It is oriented on an east-west direction. Usually visitors come to the site in the late evening to take pictures at sunset, but the temple is best seen in the early morning. 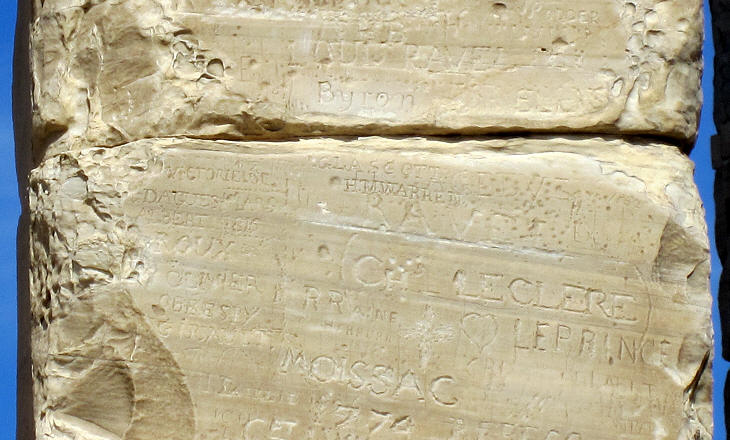 Graffiti on the right pillar

We searched diligently for inscriptions, but without success, except finding on the wall of the temple many modern names. Chandler
The two square pillars to the sides of the entrance to the cell, the steps leading to the temple and almost any other stone having a plain surface are covered with graffiti with the names of travellers who visited the site in the XVIIIth and XIXth centuries. Perhaps the name of Lord Byron was carved by an enthusiast admirer, rather than by the poet himself who dedicated the following verses to Sounion:

Place me on Sunium's marbled steep,
Where nothing, save the waves and I,
May hear our mutual murmurs sweep;
There, swan-like, let me sing and die;
(Don Juan, Canto the Third - "The Isles of Greece")

Southern side (that more visible from the sea)

Lord Byron made reference to the site by its Greek name, but sailors (and cartographers as well) called it Cape Colonna, the cape of the columns, well into the second half of the XIXth century. The name was given by the Venetians (they gave the same name to a cape on the island of Egina).

Off Cape Colonna
Aloof they crown the foreland lone,
From aloft they loftier rise--
Fair columns, in the aureole rolled
From sunned Greek seas and skies.
They wax, sublimed to fancy's view,
A god-like group against the blue.

Over much like gods! Serene they saw
The wolf-waves board the deck,
And headlong hull of Falconer,
And many a deadlier wreck. Chandler says that the Temple of Minerva Sunias was within the wall of the old town. We saw no remains of this town; but we were induced to believe, from the appearance of some ruins upon an opposite hill, on the northern side of the port, that these were the remains of Sunium. The impatience of our mariners prevented our visiting those ruins, although they have been hitherto undescribed.
Edward Daniel Clarke - Travels in various countries of Europe, Asia and Africa - 1817-1824
The Athenians built a temple to Athena on a hill near the cape; it was a less imposing building than the temple to Poseidon and its location was somewhat hidden from the view from the sea as if the Athenians pursued a policy of pleasing both gods.
The dispute between Athena and Poseidon about Athens was just one of their many quarrels; all along the Odyssey Athena helps Ulysses, while Poseidon does his best to hinder his return home; another cause of conflict between the two related to Medusa, a beautiful young girl whom Poseidon raped inside a temple dedicated to Athena; in revenge the goddess turned Medusa into a horrible monster. 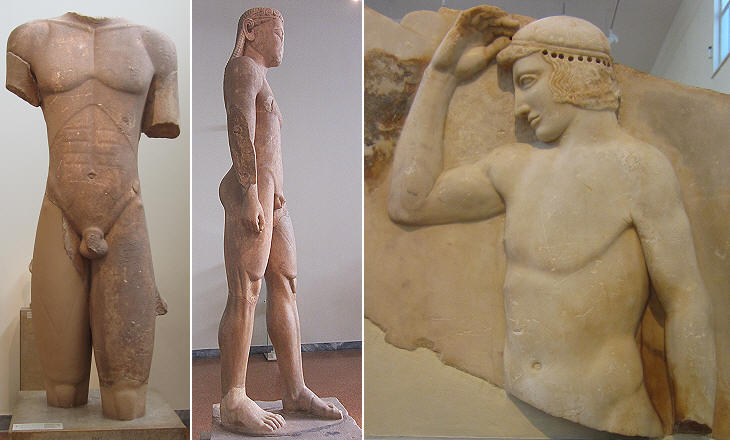 National Archaeological Museum of Athens: from Sounion: (left/centre) "kouroi" (VIIth cent. BC) you may wish to see "kouroi" at Delphi and Reggio; (right) votive relief portraying an athlete crowning himself; his wreath was made of metal and fitted the drilled holes that are visible around the head (Vth cent. BC)

Archaeologists found two kouroi, standing statues of a naked young man right in front of the temple to Poseidon; these statues are typical of early Greek civilization and were usually associated with the worship of Apollo, because the gigantic statue of this god at Delos portrayed him as a kouros.
The sanctuary of Sounion was the site of periodical festivals, probably at the beginning of winter, which involved games.
During the Roman Empire sailors often sought the protection of Isis, rather than that of Poseidon (you may wish to see the Temple to Isis at Sabratha). Oceanus, rather than Poseidon, was portrayed with sea creatures in many mosaics of the Late Empire, such as that found near Antioch. Rock partridges relaxing at Cape Sounion; perhaps one of them is a reincarnation of Leto, the mother of Apollo and Artemis who was turned into this type of quail so that she could escape from the wrath of Juno