- Roman memories around Toulouse
(relief at Glanum and quotation from Pliny: "It is More Similar to Italy than to a Province")

You may wish to see an introductory page to this section or a page on Roman Toulouse first. All the photos which illustrate this page were taken at Musée Saint-Raymond, the Archaeological Museum of Toulouse which is housed in an old hospital near Basilica of Saint-Sernin. (above) Busts of the imperial families from the Roman villa of Chiragan; (below-left to right) Trajan, Antoninus Pius, young Marcus Aurelius and Septimius Severus

The most remarkable part of the museum is (..) a very large collection of antiquities dug up near the small town of Martres on the l. bank of the Garonne, a little below St Gaudens (not far from Lugdunum Convenarum/ Saint-Bertrand-de-Comminges, south-west of Toulouse), and proved by M. Du Mège to be the ancient Calagorris. In consequence of the excavations undertaken at his suggestion it has proved a Gallic Pompeii. The discoveries consist of a series of about 40 busts and medallions of Roman emperors and of members of their families from Augustus and Claudius down to Gallienus forming a tolerably complete portrait gallery.
John Murray III - Hand-book for Travellers in France - 1843
The site excavated in 1826 by Alexandre Du Mège, a collector of antiquities, was eventually identified as that of a very large Roman villa with farming facilities, rather than that of a town. The toponym chiragan in Old French meant "mass of ruin". 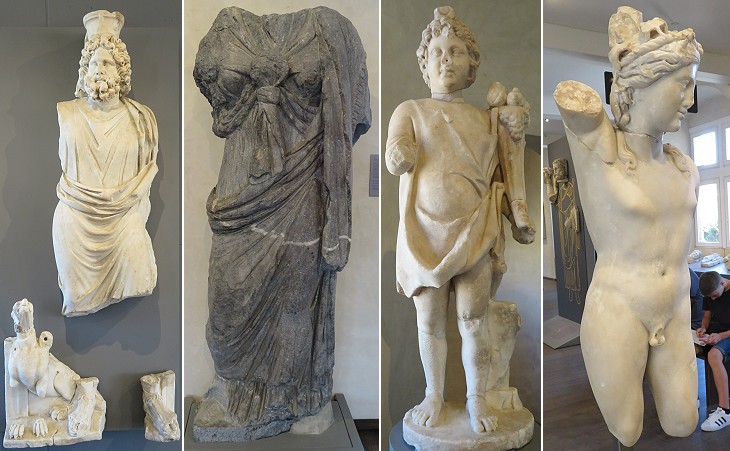 Statues from Chiragan: (left to right) Serapis/Hades, Isis (notice the typical knot), Harpocrates, son of Serapis and Isis (the identification assumes the child raised a finger to the lips, as he was regarded by the Greek and the Romans as the god of silence), and Dionysus/Bacchus; this selection of mainly Egyptian deities would have pleased Emperor Hadrian and brings to mind his villa at Tivoli

(The discoveries consist) of a number of small statues of gods and goddesses of good execution especially in the drapery including Isis, Venus, Diana, Jupiter, Serapis, Esculapius, Harpocrates. Murray
Most statues were likely bought in Rome as they are made of Italian or Greek marbles, but that of Isis is made of a black stone from the Pyrenees. The villa was constantly occupied from the Ist century AD to the early Vth century; it reached its largest size at the time of Emperor Antoninus Pius, a period of peace and prosperity throughout the Empire. 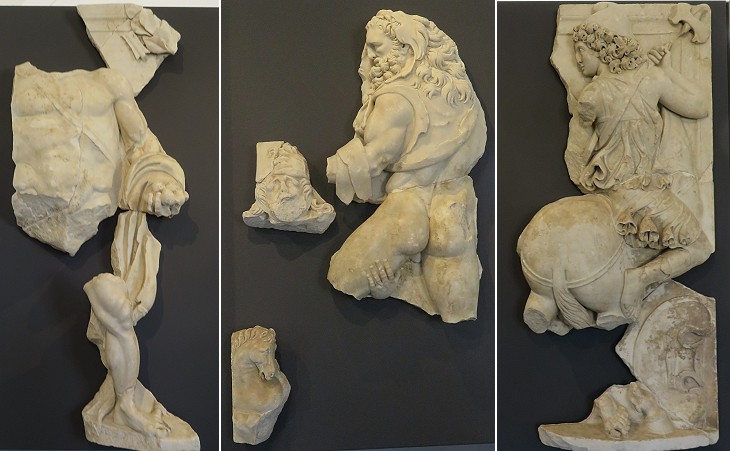 Panels with the Labours of Hercules from Chiragan (see three other panels in the introductory page): (left to right) Golden Apples of the Hesperides (11th); Mares of Diomedes (8th); Belt of Hippolyta (9th)

(The discoveries consist) of a series of bas reliefs much mutilated representing the labours of Hercules. Murray
The reliefs were made by using a local stone; the sculptor(s) mastered all types of reliefs, from the very low depiction of a pelta, the shield of Hippolyta, Queen of the Amazons, to the sculpture in the round of the hand of Hercules holding the golden apples. They utilized a trick which we associate with Baroque sculpture, i.e. parts of the reliefs/statues project outside the frame/niche which surrounds them (see an example in Rome); this trick is very noticeable in the relief of Hippolyta. 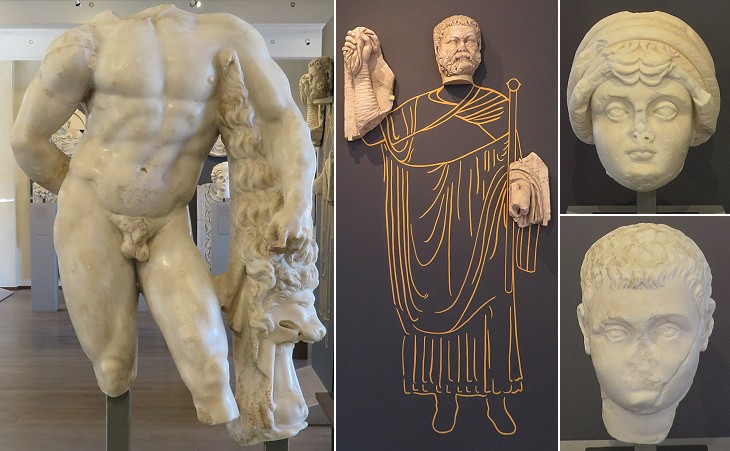 From the very beginning archaeologists came to the conclusion that Chiragan belonged to an important magistrate, who possibly performed his function there and for this reason placed the portraits of the imperial families in the public part of the villa. A dedicatory inscription to Caius Aconius Taurus on one of the busts, the only epigraphic reference, does not contain useful elements to link it to a known Roman officer/personage. Archaeologists were unable to formulate hypotheses on the owners of the villa until 2008, when Professor Jean Charles Balty associated some busts with Co-emperor Maximian and his relatives. When Maximian was made co-emperor by Diocletian, he received the appellation of Herculius, whereas Diocletian adopted that of Iovius. The panels with the Labours of Hercules, according to Prof. Balty, were commissioned by Maximian who resided, or had in mind to reside, at Chiragan.

Prof. Balty suggests that the medallions or clipei (round shields) with busts of gods were placed on the same hall which housed the panels of Hercules, in order to show the divine protection on the deeds of the hero/demigod and on those of Maximian. This major iconographic effort could have been made to celebrate the victorious campaign by Maximian in 286 to eradicate the Bagaudes, bands of impoverished local free peasants who tried to resist the labour exploitation in the latifundia (large real estates), whom the Roman historians portrayed as brigands. It is possible that Chiragan too was affected by raids of these peasants. The curators of the Museum have endorsed this opinion, but with a question mark. In the past the panels of Hercules, because of their fine execution, were dated late IInd century, and were associated with Emperor Commodus, who was known for his admiration for Hercules (see a very fine bust of Commodus as Hercules at Musei Capitolini). 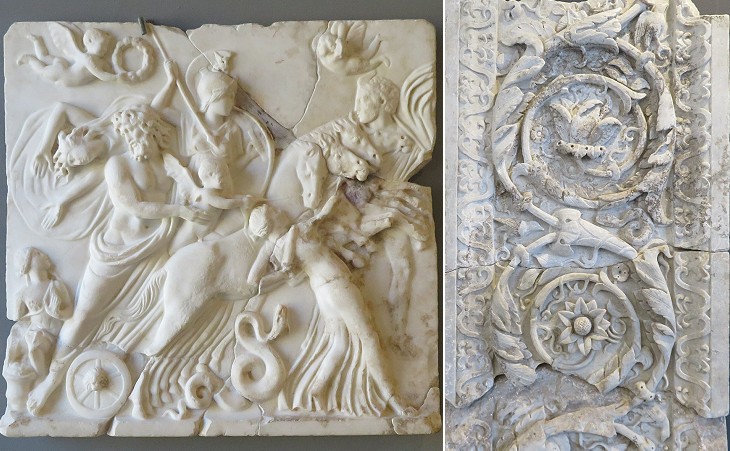 (The discoveries consist) of a number of Corinthian capitals, friezes, and other architectural ornaments. Two bas reliefs with inscriptions relating to the two Emperors Tetricus (the last ones of the Gallic Empire) have given rise to much discussion among antiquaries. Murray
The first excavations were conducted by Alexandre Du Mège who was immediately impressed by the number of statues and reliefs which he found on the site. In 1843, as reported by Murray, the site was already called the Gallic Pompeii, yet the focus of Du Mège's archaeological campaigns was on finding works of art, rather than trying to properly identify the ancient buildings. This was done only in 1891, but it was already too late to develop a proper archaeological site and today farmed fields cover the ancient villa. Some doubts still linger about the authenticity of the early findings by Du Mège because a relief portraying a triumph of the two Emperors Tetricus proved to be a fake.
The image used as background for this page shows a coin of Emperor Septimius Severus from Chiragan. 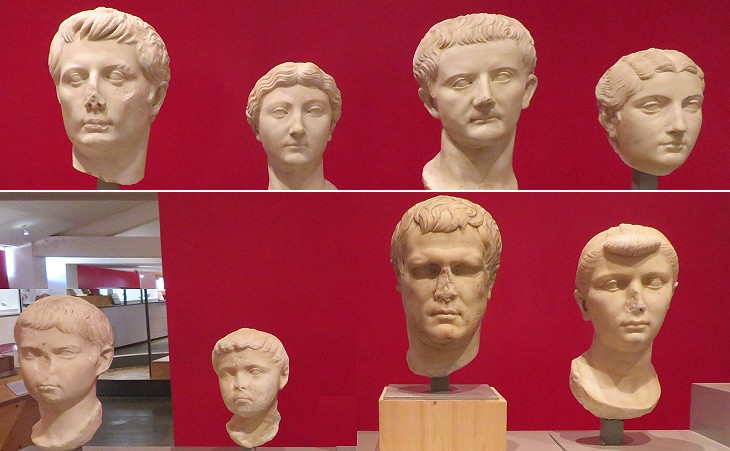 Heads of statues of members of the Augustan family from Béziers: (above-left to right) Augustus, Livia his third wife, Tiberius and Antonia Minor, niece of Augustus and future mother of Claudius; (below-left to right) Agrippa Postumus, his sister Agrippina Maior (future mother of Caligula) and their parents Marcus Vipsanius Agrippa and Julia, Augustus' daughter

The heads of ten statues were found in April 1844, in the centre of Béziers, Roman Baeterra, west of Narbonne, in what was the ancient forum of the town. The statues were most likely placed inside niches because their backs are not very detailed. They probably arrived at Baeterra in two batches: first Augustus with Agrippa and his family, then Tiberius and Livia. 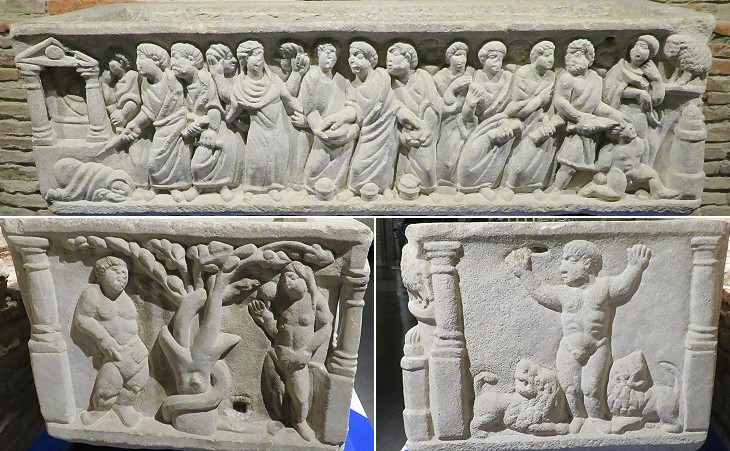 Christian sarcophagus of a child from Auch, 50 miles west of Toulouse (IVth century): (above - left to right) the Raising of Lazarus, the Multiplication of the Loaves, the Wedding at Cana and the Binding of Isaac; (below-left) Adam and Eve and the Original Sin; (below-right) Daniel in the lions' den, a symbol of Salvation

A sarcophagus from St. Orens at Auch displays with symbolical allusion the sacrifice of Isaac and Lazarus deplored by Martha with Adam and Eve. Murray
The sarcophagus has an elaborate decoration which shows a sound theological knowledge; it is possible that the dead child was the son or daughter of a priest. You may wish to see a Christian sarcophagus at Arles and the Two Testaments Sarcophagus in Rome which show a similar complex decoration.

Move to Roman Toulouse or to Basilica of Saint-Sernin or to Other medieval monuments of Toulouse.