- Archaeological Museum of Reggio
(left) Temple to Hercules at Agrigento; (right) detail of the apse of Palermo's Cathedral 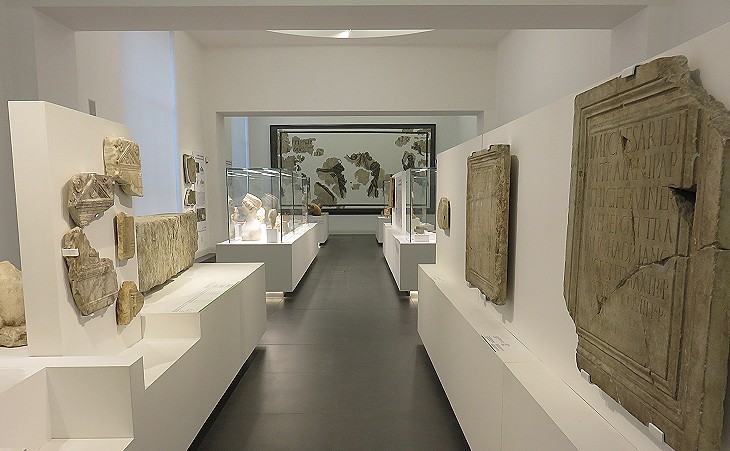 An Excursion by Water is frequently made from Messina to visit Scylla and land at Reggio about four leagues distant. (..) Reggio, ancient Rhegium, displays melancholy traces of the earthquake of 1783. One handsome Street in which stands the Cathedral is however capable of being perfectly restored without much expense. The Cathedral deserves notice; the University contains curious imitations of Plants; the Manufactory of Bergamotte Oil is worth seeing.
Mariana Starke - Travels in Europe for the Use of Travellers on the Continent and likewise in the Island of Sicily - 1838 Edition - based on a travel to Sicily made in 1834.
On December 28, 1908 a major earthquake struck the Strait of Messina. The historic centre of Reggio was devastated, its seafront was destroyed by three tsunami waves and the Cathedral was so damaged that it was eventually demolished. Today excursionists from Messina visit Reggio to see its recently refurbished archaeological museum, the exhibits of which are a useful complement to those of Sicily, because the ancient history of Calabria has many points in common with that of the island. 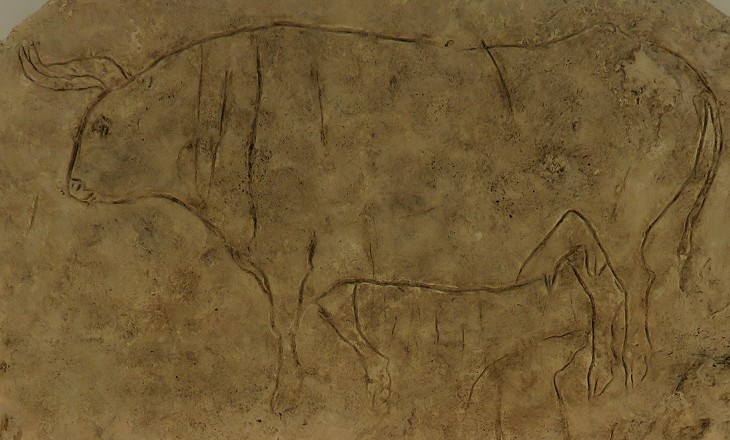 Cast of a relief at Grotta del Romito in northern Calabria (ca 8,000 BC)

The Riace Bronzes (see below in this page) are the "must see" of the museum, but many other exhibits deserve being seen. They provide visitors with an overall understanding of the early human presence in this mountainous and long peninsula (the toe of the Italian boot) which separates the Tyrrhenian Sea from the Ionian one. In the past it was referred to as Calabrie (plural) because it housed territories having different morphological, cultural and economic features. 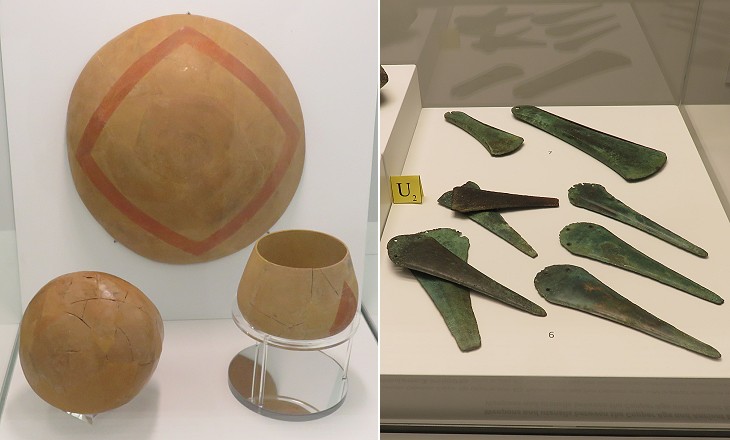 Some of the oldest exhibits of the museum, including fragments of obsidian, suggest that ancient Calabria had close links with the Lipari islands and that its population, prior to the arrival of settlers from Greece belonged to the Ausoni, an ethnic group from the territory between Rome and Naples. The inhabitants of the region were also known as Enotri and Enotria (land of wine) was an alternative Greek name for Italy. 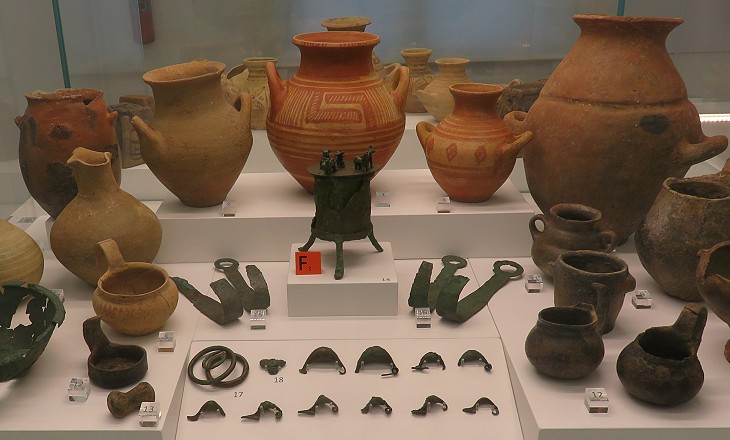 I am cleaving the Ionian waves, not of my own will, but forced to boldness through fear. Wretched me! what mighty winds swell the waters, casting up the seething sand from the lowest depths! Mountain-high upon prow and out-curving stern leaps the billow lashing the painted gods. The pine-wrought fabric resounds, and the ropes, whipped by the shrieking wind, and the very keel groans over my woes.
Ovid - Tristia ex Ponto - IV - Translation by Arthur Leslie Wheeler
Ovid, similar to Ulysses and Aeneas, had to face a stormy Ionian Sea. Summer weather conditions however allowed the ancient ships to safely cross the sea and establish trade links between Calabria and Greece. The funerary equipment of local ethnic groups show signs of Greek influence prior to the establishment of Greek colonies. 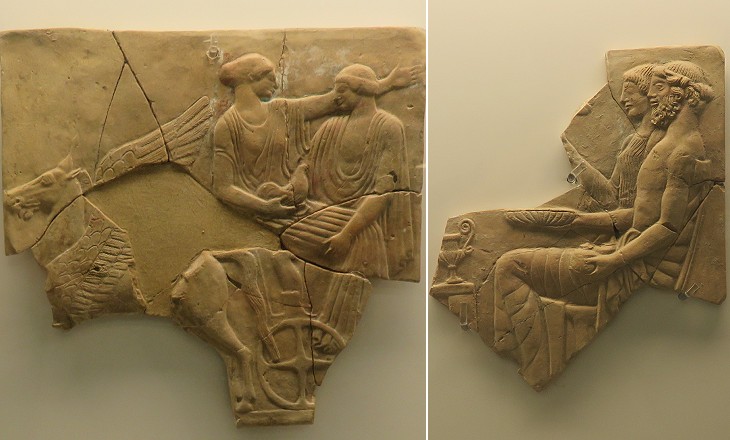 The museum has a very extensive collection of pinakes, votive terracotta tablets which were deposited in a sanctuary or affixed to a wall, e.g. in Syracuse. Those of Locri, a Greek town near Reggio, were found in a shrine to Persephone, goddess of the Underworld. The cock she holds in some pinakes is a symbol of the transition from night to day and of the return of the goddess from the Underworld to Earth. When the pinakes deposited at a shrine were too many, they were broken into pieces to prevent their reuse and then buried. 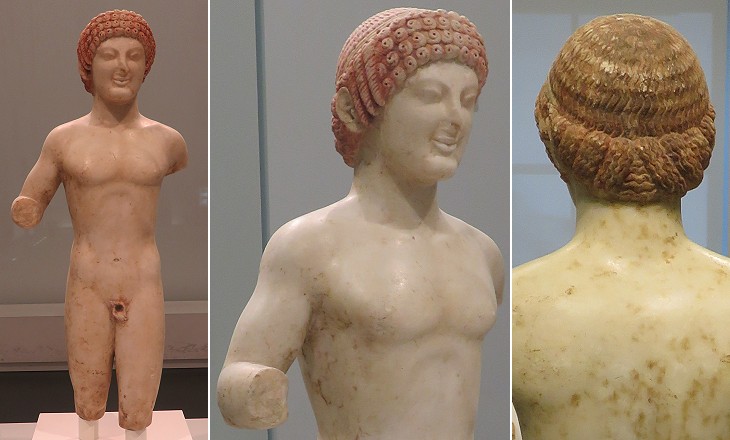 Kouros/Ephebe of Reggio (VIth century BC)

This statue, which most likely embellished a funerary monument, was found in 1990 during a control in the home of a person suspected of financial crime. It portrays a kouros, a Greek word meaning boy, youth of a noble rank. Other similar statues found at Selinunte and Agrigento are usually called ephebe which is a less appropriate term. You may wish to see earlier examples of kouroi in Delphi and Sounion. 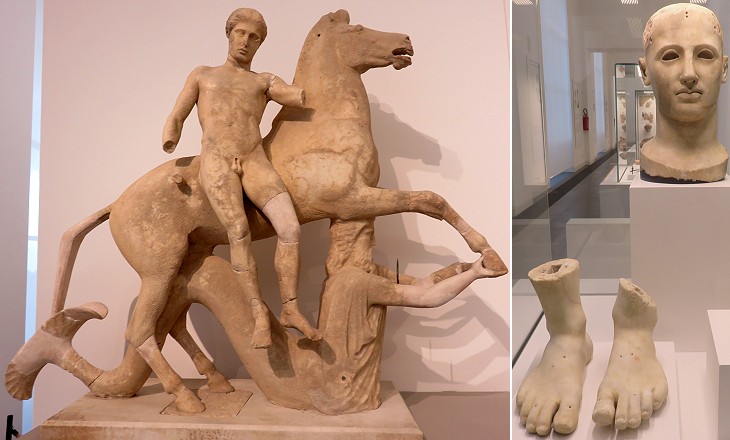 Many temples of the Greek colonies in Calabria were decorated with works of art from the motherland. The statue of one the Dioscuri decorated a temple of Locri and it was sculpted in marble from Paros. The foundation of some towns is attributed to participants in the Trojan War. Philoctetes, the archer who killed Paris by throwing four arrows against him, founded Krimisa and built there a temple to Apollo, the god who guided him in his wanderings. The statue of the god is an acrolith (from the Greek words meaning height/extremity and stone), in which marble is used only for the naked parts of the body, the other ones being made up of bronze or wood or a less expensive calcareous stone (see a a statue of Emperor Constantine in Rome).

(left) Lid of a "lekanis", a low container, portraying a Papposilenos (old satyr) (Locri - IVth century BC); (right) glass bowl (from a tomb near today's Varapodio - IInd century BC)

The Greek towns of Calabria achieved a high degree of wealth. The wealth and luxury (and debauchery) of Sybaris in northern Calabria was described by many ancient writers, hence sybarite indicates a person who indulges in luxury. The decoration of the bowl shown above was made by inserting gold leaves between two very thin layers of glass. It shows the level of refinement of the wares utilized by the upper classes of Calabria. 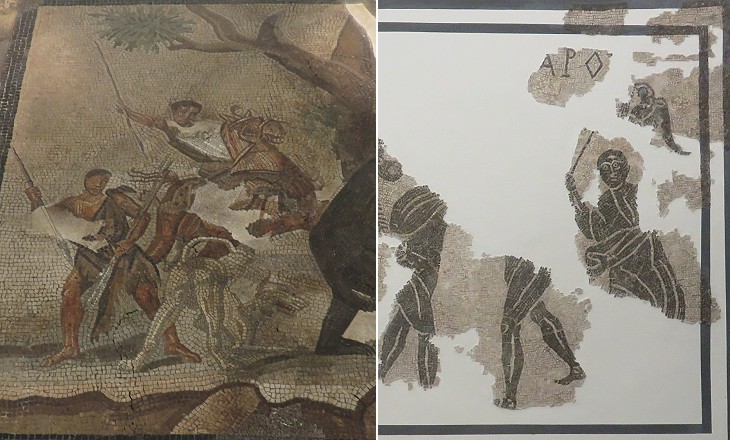 (left) Floor mosaic depicting horsemen hunting a bear from a house of Taureana (Ist century BC); (right) mosaic depicting a fight between wrestlers from the Baths of Reggio (IIIrd century AD)

The Romans conquered the northern part of Calabria at the end of their war against Tarentum (Taranto). The rest of the region became a Roman territory during the First and the Second Punic Wars. Reggio became the capital of Regio III Lucania et Bruttii, one of the eleven regions into which Emperor Augustus divided the Italian peninsula. The town sided with the Romans during the Punic Wars and was granted privileges which favoured its development.
The image used as background for this page shows a bust of a young woman, perhaps Annia Faustina the Younger, wife of Emperor Marcus Aurelius. 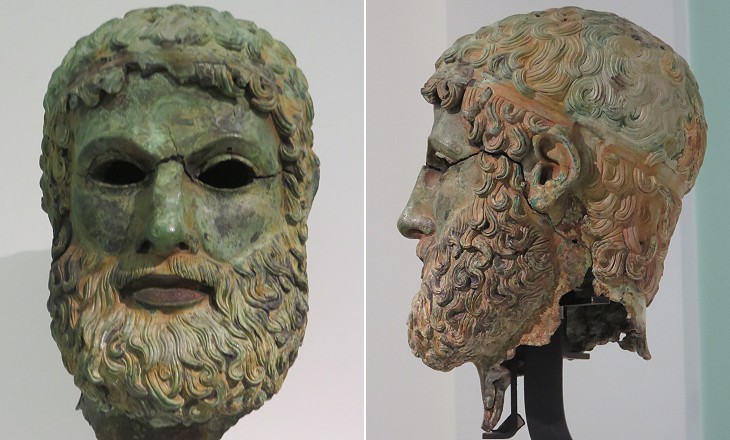 One of two bronze heads (Vth century BC) found in 1969 in the sea near Porticello, in the narrowest point of the Strait of Messina

Scylla was a monster which lived on the Calabria side of the Strait of Messina. It is portrayed while assaulting Ulysses' ship in a statue found at Grotta di Tiberio near Sperlonga. The monster most likely attacked also a ship which carried fragments of bronze statues together with lead and silver ingots and many amphorae. Based on its wreckage archaeologists believe the ship sank in the IVth century BC. The two bronze heads which were found in 1969 were most likely violently detached from the rest of the statues during one of the many wars between Sicilian towns (e.g. that between Segesta and Selinunte) and afterwards they were shipped to be sold as scrap material. 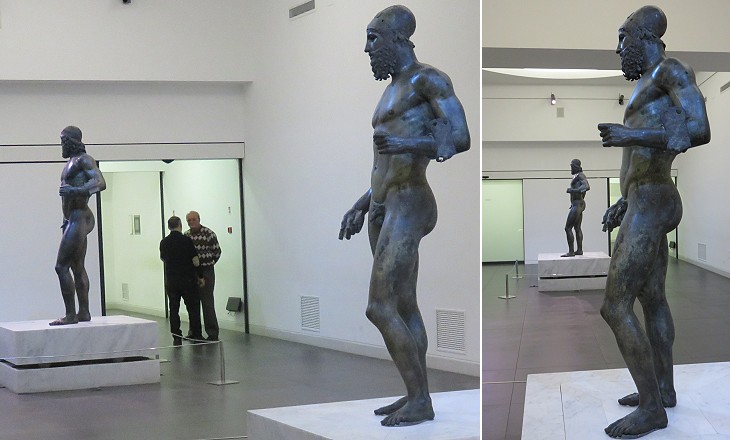 Hall of the Riace Bronzes

The finding of the two bronze heads at Porticello was followed in 1972 by that of two large entire bronze statues in the Ionian Sea near Riace. A Roman holidaymaker noticed the arm of one of the statues in the sand while snorkelling at 200 meters from the coast and called the police. No wreckage was found in the proximity of the statues. The restoration of the statues was a very lengthy affair and it was mainly done in Florence where in December 1980 the Riace Bronzes were first displayed. After a short temporary exhibition in Palazzo del Quirinale in Rome they were moved to Reggio. In December 2013, after another lengthy restoration, they were placed in a specially conditioned and anti-seismic room. 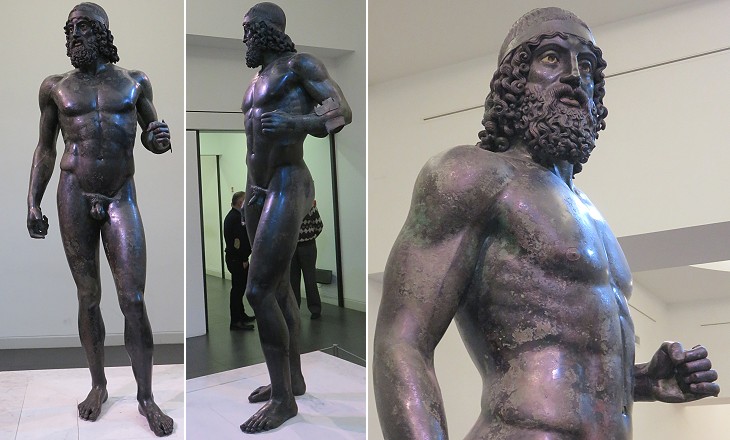 Warrior A - The Younger. The nipples and lips of both statues are made of copper, the teeth of a silver alloy and the eyeballs of a calcareous stone

Archaeologists and art historians have debated at length the origin of the statues and the names of the athletes or warriors they portray. Some believe they were made in Greece where they decorated treasuries (small temples) of Delphi or Olympia, others suggest they were the work of a Greek sculptor of Calabria or Sicily. When it comes to the identification of the subjects portrayed by the statues, there are so many opinions that for the time being they continue to be known as the Riace Bronzes. 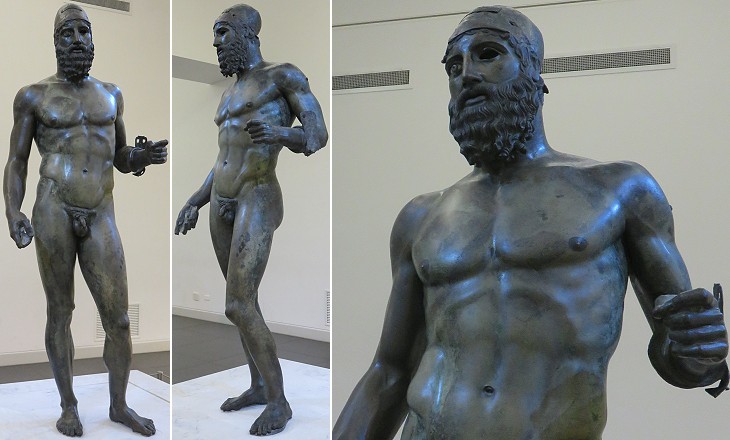 Warrior B - The Older

Assuming the statues were made in Greece it makes sense to believe that they were thrown out of board by a ship which was at risk of sinking and which was carrying them to Rome or another Italian location in the Ist century BC or AD when antiquarian trade between Greece and Italy reached its peak. You may wish to see two other ancient bronze statues in Rome and the Charioteer of Delphi, the best known Greek bronze statue or the bronze artifacts which were found in a shipwreck in Mahdia in Tunisia in 1907 and in Southern France.