- Catania - Via dei Crociferi
(left) Temple to Hercules at Agrigento; (right) detail of the apse of Palermo's Cathedral

You may wish to read an introduction to this section or a page on the main monuments of the town first. 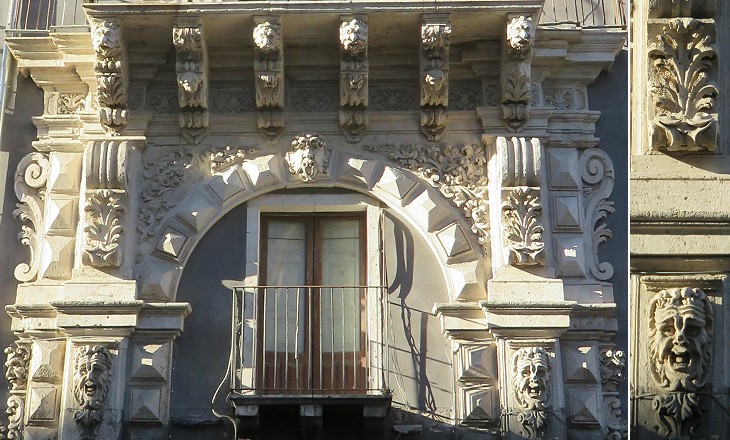 Catania is reviving with great splendour, and, when all the houses now building are finished, will be a very handsome city.
Henry Swinburne - Travels in the Two Sicilies. 1777-1780
In 1693 a major earthquake struck Catania and south-eastern Sicily. The reconstruction of the town lasted for almost a century and gave to its main streets and square a very consistent Rococo aspect. Over time this consistency of style has been replaced by a more varied urban landscape. Via dei Crociferi, a street which from the very beginning was designed to house monasteries and nunneries has retained its original aspect to a greater extent than other streets. It begins at Strada Reale, the main east-west street of Catania along which the wealthiest families built their palaces.
The Gravina Cruyllas, Princes of Palagonia are best known for the bizarre decoration of their villa at Bagheria; their palace at the corner between Strada Reale and a small square leading to Via dei Crociferi, was soon modified to obtain apartments and shops, but the former portal conserves its exuberant decoration. It houses a small museum dedicated to Vincenzo Bellini, the opera composer best known for Norma, who was born in 1801 in this building and to whom Catania dedicated its opera house in 1890. 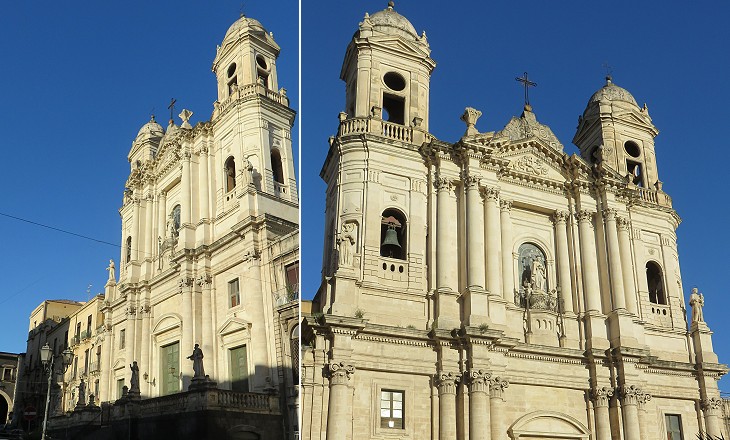 (left) S. Francesco at the beginning of Via dei Crociferi; (right) upper section and bell towers

The Franciscans had difficulties in establishing their first convents in Sicily. Their church in Palermo was built only after the death of Frederick II, German Emperor and King of Sicily, an open enemy of the Franciscan Order. In addition at Catania they had to face the hostility of the Benedictine Deans of the Cathedral and only in 1329 they were able to build their convent. Its reconstruction and in particular that of the church was a very long affair. The lower part of the façade was completed in 1761 while the upper section and the two bell towers were added in 1855. The two parts are consistent in style, although they were built at a distance of a century during which architectural tastes greatly changed. 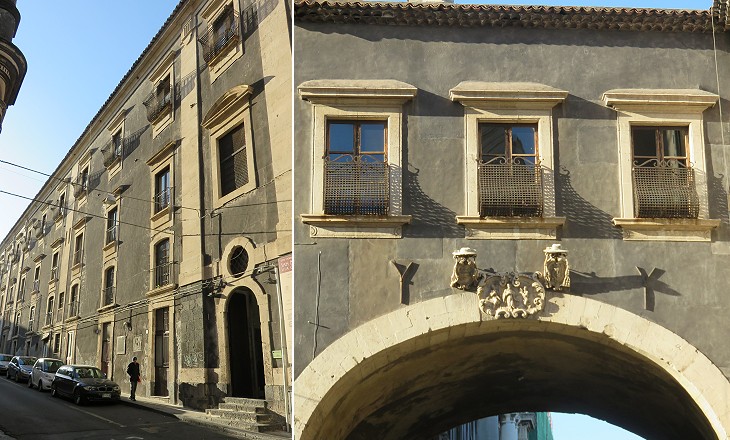 The Normans conquered Sicily in the XIth century; because its inhabitants were either Muslims or Greek Orthodox Christians one of their first initiatives was to promote the settlement of Benedictine communities on the island to favour conversions to the Catholic faith. In 1176 they assigned the imposing Cathedral of Monreale to Benedictine monks. Eventually other religious orders gained influence in Sicily, but at Catania and its environs, the Benedictines retained a special importance which lasted until the XIXth century. Benedictine nuns lived opposite the Cathedral and Benedictine monks had an imposing palace at S. Nicolò l'Arena. Other Benedictine institutions stood on both sides of Via dei Crociferi and a passage across the street facilitated movements between their properties. 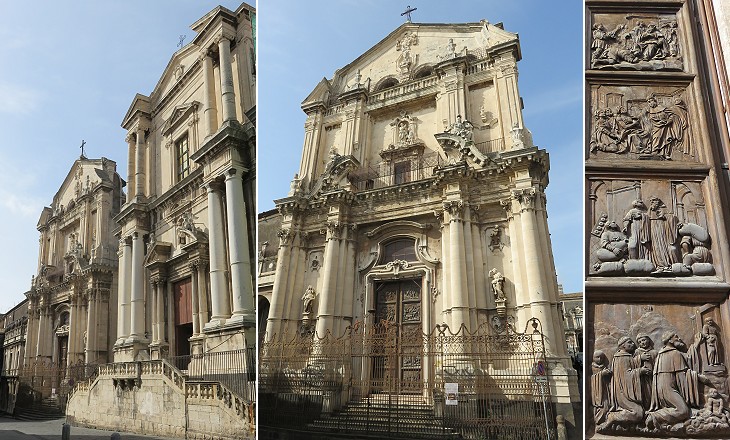 The Benedictine influence was challenged by the Jesuits who settled in Catania in 1556 and were given by the local bishop the task to preach in 14 churches. After the 1693 earthquake they built a church (S. Francesco Borgia) and an adjoining college next to the church of a Benedictine nunnery. The design of the latter is attributed to Giovanni Battista Vaccarini, an architect who had a great role in the reconstruction of Catania and in particular in that of the Cathedral. 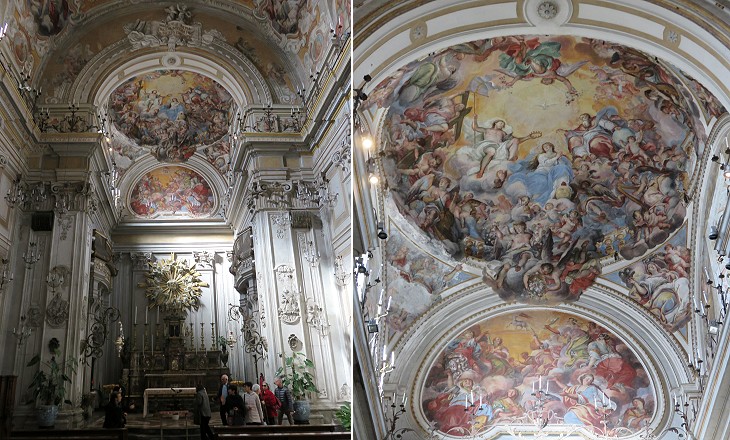 The rich decoration of many XVIIIth century churches of Palermo was based on marmi mischi, elaborate marble inlays on a dark background, and on polished stuccoes. The interior of the churches of Catania has instead a more Roman appearance; this one brings to mind S. Maria in Vallicella. 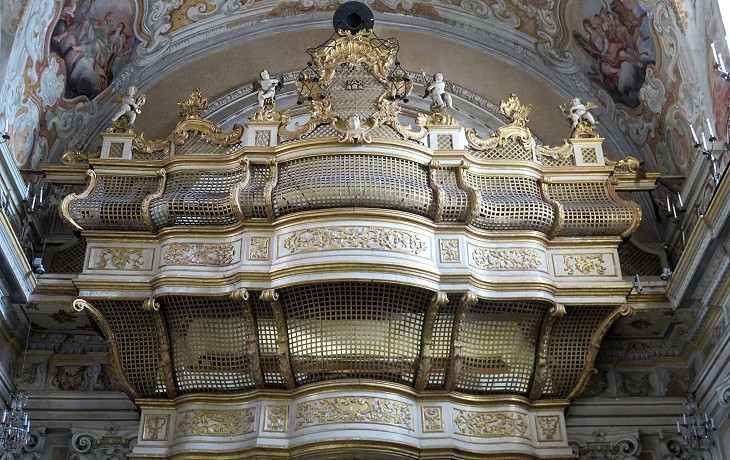 Kayser's presence now raised and developed our love of music, which had hitherto been confined to theatrical exhibitions. He was keen on attending church festivals, and we found ourselves induced to listen with him to the festive music performed on such occasions. We found it no doubt already much secularized, and provided with a complete orchestra, though song still ever predominated. I remember hearing for the first time, on a St. Cecilia's day, a "bravura" with accompanying chorus. Its influence on me was extraordinary, such as it still ever exercises on the public when the like comes to be performed in an opera.
J. W. Goethe - Italian Journey - Translation by Charles Nisbet
Nuns attended Mass behind an elaborate screen placed above the entrance or from small balconies in the apse. These locations were studied in order to enhance the effect of the hymns they sang during the most important ceremonies. As Goethe pointed out in the late XVIIIth century the music played in churches had lost its purely religious purpose. You may wish to see the organ of S. Nicolò l'Arena and a page showing some fine organs and choir lofts in the churches of Rome. The street is named after the Crociferi, the members of an order founded by St. Camillus de Lellis in 1584 who wore a red cross on their black cassock. The main purpose of the order was to help the sick so they were also known as Ministri degli Infermi (Sick). Similar to other buildings of Catania, the construction of this church required a long time. It began in 1723 and it ended in 1788.
The Jesuits had a second church along Via dei Crociferi; its design is attributed to Vaccarini. Convex façades were popular at Noto and other towns which were completely rebuilt after the 1693 earthquake. The churches of Catania were often faced with a local white stone, thus they bring to mind the travertine façades of many Roman churches. 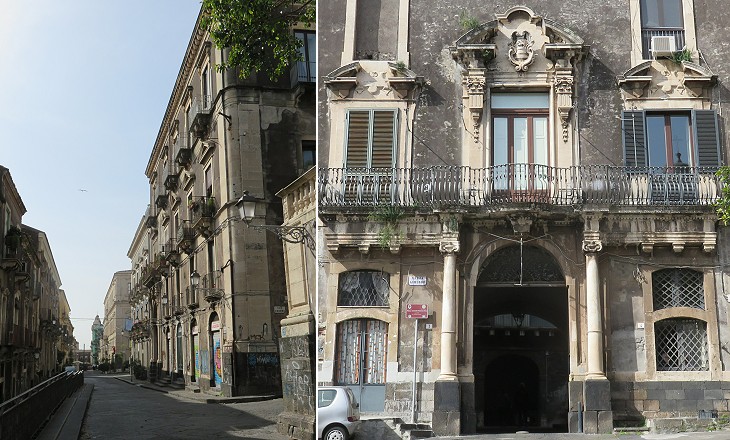 (left) Via dei Crociferi seen from its northern end; (right) nearby Palazzo Asmundo

The same white stone was utilized to highlight the architectural elements of civilian buildings. The walls were covered by a greyish paint which contained volcanic sand with an overall black and white decoration which was typical of some local medieval buildings (e.g. at Taormina). Although some houses along the street are a bit run down, the overall view of Via dei Crociferi on a sunny winter morning is worth the walk. Via dei Crociferi is slightly uphill and its last northern section is a dead end street which is interrupted by the elaborate portal of a villa. The estate was bought in the 1720s by Giovanni Rosso, Prince of Cerami, a friend of Ignazio Paternò Castello, Prince of Biscari who is known for the collection of antiquities he gathered in his palace. The villa after many changes of property and to the main building was eventually acquired by the University of Catania. 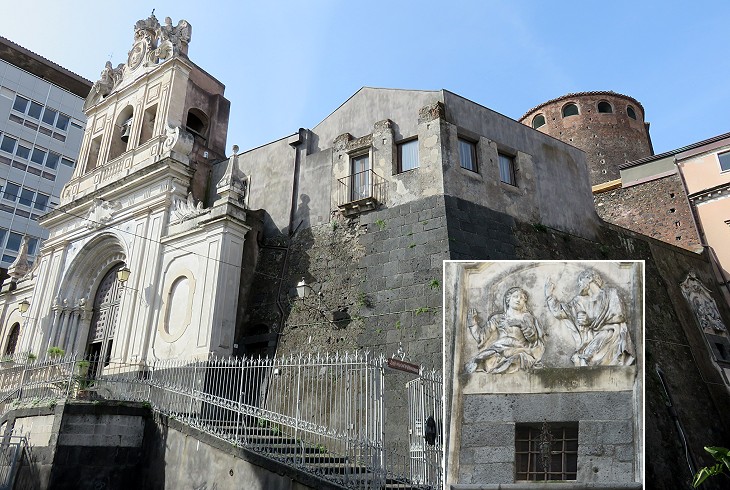 S. Agata al Carcere; (inset) relief above the jail depicting St. Agatha and St. Peter, who was jailed too

By going around Villa Cerami one reaches the northern end of the historical town where a church stands on a XVIth century bastion. It is dedicated to Agatha, patron saint of Catania, a IIIrd century martyr. She is to Catania, what St. Rosalia is to Palermo and St. Lucy to Syracuse. The area is very near the Roman amphitheatre and an ancient room inside the bastion is believed to have been the jail of the saint. S. Agata al Carcere: (left) façade; (right) details of the medieval portal; another one is shown in the image used as background for this page

The church was redesigned after the earthquake and in 1762 a portal from the collapsed Cathedral was reassembled in its façade. It is dated late XIIth/early XIIIth century and apparently it is not decorated with religious symbols.