- Segesta
(left) Temple to Hercules at Agrigento; (right) detail of the apse of Palermo's Cathedral

You may wish to read an introduction to this section first.
Alcamo, Thursday, April 19, 1787.
We are at present in Alcamo, a quiet and clean little town, whose well-conducted inn is highly to be commended as an excellent establishment, especially as it is most conveniently situated for visitors to the temple of Segeste, which lies out off the direct road in a very lonely situation.
J. W. Goethe - Italian Journey - Translation by Charles Nisbet 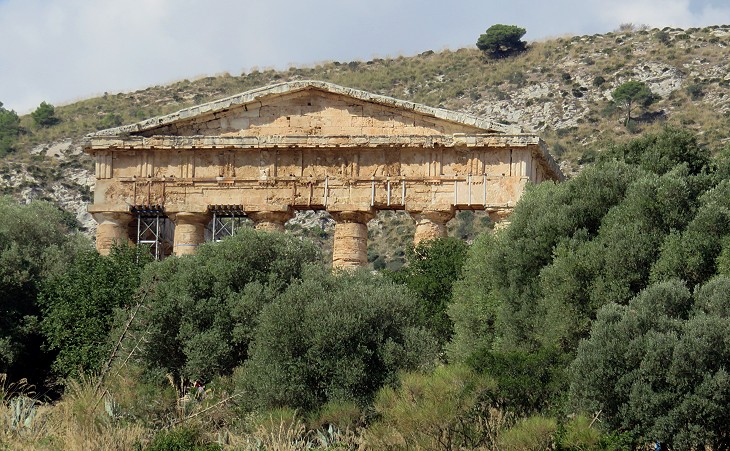 Segeste, April 20, 1787.
The district reposes in a sort of melancholic fertility - every where well cultivated, but scarce a dwelling to be seen. Goethe
I then proceeded about two miles over moist stony pastures to a place called Barbara, where stood the city of Egesta or Segesta founded by the Trojans. (..) Nothing could be more judiciously chosen than the situation of Segesta; it lay upon a ridge of hills gently sloping towards the north, sheltered on the southern and eastern quarters by high rocky eminences, at the foot of which two roaring brooks winded their course and embraced the city.
Henry Swinburne - Travels in the Two Sicilies. 1777-1780
According to accounts by Virgil and Dionysius of Halicarnassus Segesta was founded by a Sicilian prince of Trojan descent. Although not based on historical evidence their statements highlighted the fact that the origin of the town was neither Greek, nor Carthaginian. 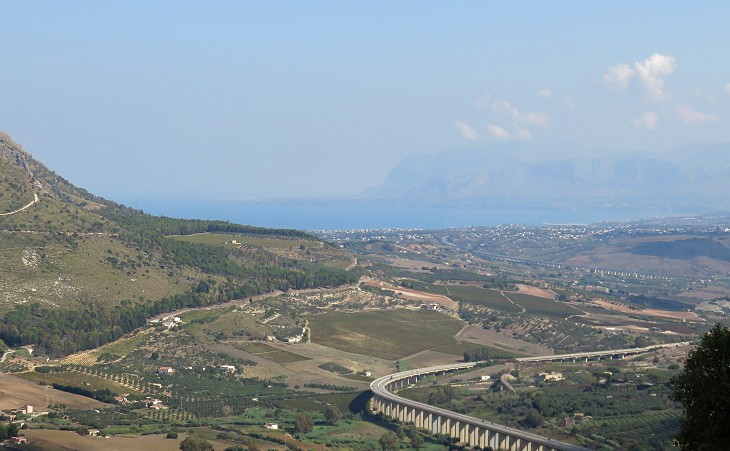 The site of the temple is singular; at the highest end of a broad and long valley, it stands on an isolated hill. Surrounded, however, on all sides by cliffs, it commands a very distant and extensive view of the land, but takes in only just a corner of the sea. Goethe
While Segesta was in a flourishing state, its environs populous, and well cultivated, the aspect of the country must have been delightful and the pestilential suffocating blasts, that rush over the seas from the hot sands of Africa, could not reach this protected vale, while the wholesome north wind had free admittance to refresh and purify the atmosphere. (..) The emporium was at the mouth of the river, near the spot where Castellamare now stands. Swinburne
The inland location of Segesta is another element showing that the town was founded by the Elimi, an indigenous ethnic group living in this part of Sicily. Erice, on a commanding position over the western coast of the island, was another town of the Elimi. 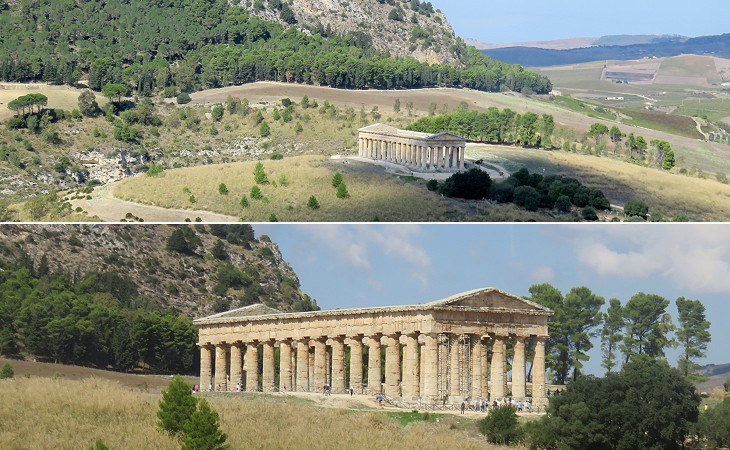 The Temple seen from the hill of the theatre

At the eastern extremity of the city, is to be seen a most noble well-preserved monument of ancient magnificence; on this bold cliff rises a Doric temple of thirty-six columns, all, except one, perfectly entire. (..) I was astonished that so few of the materials, with which the city was built, should now remain on the spot. To carry them off for purposes of building elsewhere seems an enterprise of too great labour and too little advantage to be assigned as a cause of their no longer existing, nor are there towns or houses enough in the neighbourhood to have employed the stones. The nature of the stone is too compact for the air and weather alone to dissolve. Swinburne
The temple stood outside the walls of the town which surrounded a higher hill where a theatre and presumably other public buildings were located. 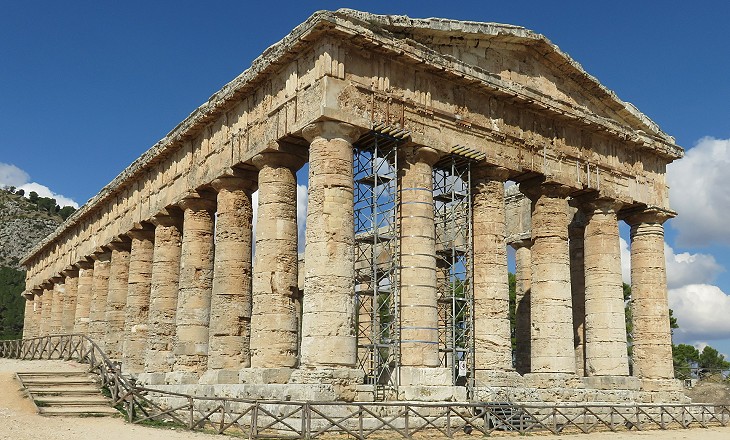 Overall view of the Temple

The sides have twelve columns, not reckoning the corner ones; the back and front six, including them. Goethe
This edifice is a parallelogram of 162 feet by 66. The colonnade stands upon one common plinth, or range of stone, which is cut through, as for an entrance, at the last intercolumnations of each flank. In the fronts it is so between all the pillars; (..) the columns are of a longer proportion than those of Paestum, and therefore I suppose this temple is of a later date; they taper very much, being six feet in diameter below, and four only at top, without any swell in the middle (aka as entasis which is very evident in one of the temples at Paestum). Swinburne
The temple is dated Vth century BC. During that period Segesta was involved in a long war against Selinunte, a Greek colony on the south-western coast of the island and an ally of Syracuse, the most important town of Sicily. The construction of such a large temple was a sort of political statement that Segesta was not inferior to Selinunte, which had several large temples. 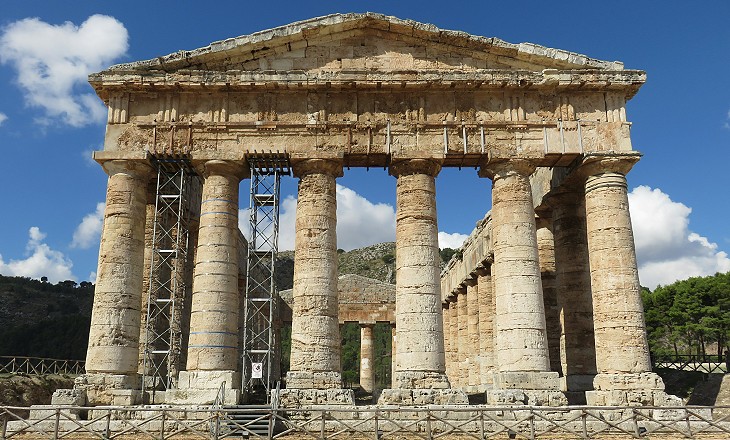 The pediments are much injured; the northern aspect is corroded by the weather; the stone being a porous grey marine concretion. The clear colour and majestic disposition of so many columns, on which light and shade are cast in various directions, and the insulated situation of so grand a building on a bold eminence in the midst of a desert, have something singularly awful and sublime in their effect. Swinburne
A shrill wind whistled through the columns as if through a wood, and screaming birds of prey hovered around the pediments. Goethe
Segesta turned to Carthage for help. In 409 a large Carthaginian army landed on Sicily and lay siege to Selinunte. The defenders of the town were not able to resist long enough to receive help from their allies. Selinunte fell and most of its inhabitants were killed. Segesta however did not gain too much from the destruction of the rival town. It had to deal with a too powerful ally and with the desire of revenge of the Greek colonies. In 397 and 307 it was attacked by Syracuse. 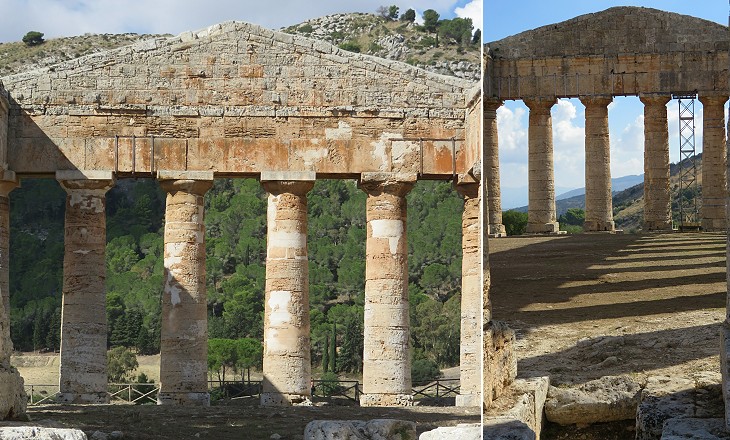 There is no inner wall or cella, nor any vestige of a roof; hence, some observers have concluded that this building was never finished. (..) As roofs are generally composed of timber, lead, copper, tiles or slates, it is easy to conceive how such materials may have been purloined or destroyed, though the solidity of the columns have resisted all attacks of time and foes. Swinburne
The temple of Segeste was never finished; the ground around it was never even levelled; the space only being smoothed on which the peristyle was to stand. (..) The strongest evidence of this fact is the floor. In some spots (along the sides) the pavement is laid down, in the middle, however, the red limestone rock still projects higher than the level of the floor as partially laid; the flooring, therefore, cannot ever have been finished. There is also no trace of an inner temple. Goethe
The fact that the temple was unfinished puzzled travellers of the past and it is still not fully understood. It is possible that Segesta, because of the many wars it sustained, did not have the resources to complete it. 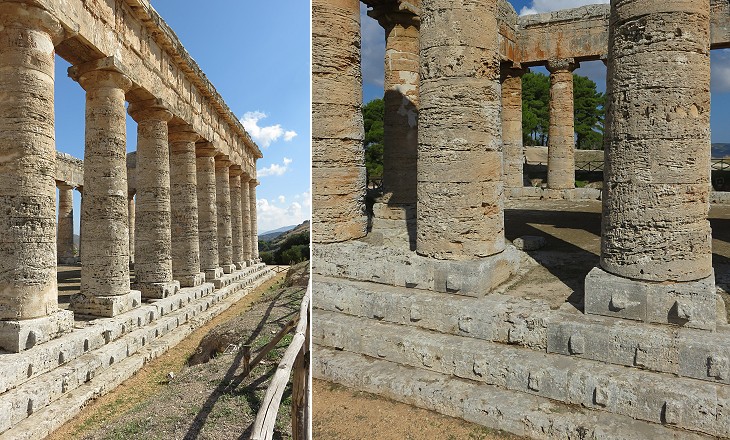 Views of the steps

How far the columns rested on a socle is hard to say; and without an engraving it is difficult to give an idea of their present state. At some points it would seem as if the pillars rested on the fourth step. In that case to enter the temple you would have to go down a step. In other places, however, the uppermost step is cut through, and then it looks as if the columns had rested on bases; and then again these spaces have been filled up, and so we have once more the first case. (..) The peglike projections by which the stones were moved along, still lie around you on the steps. Goethe
Another explanation highlights the fact that the Elimi were not of Greek origin and that their religion might not have been based on worshipping an image of a god inside a cella; it is possible that the colonnade surrounded an open air altar or another divine symbol, perhaps an isolated holy tree (you may wish to see a page on the sacred oak of Dodoni). This hypothesis explains why the construction of the temple did not begin by erecting the walls of the cella first. 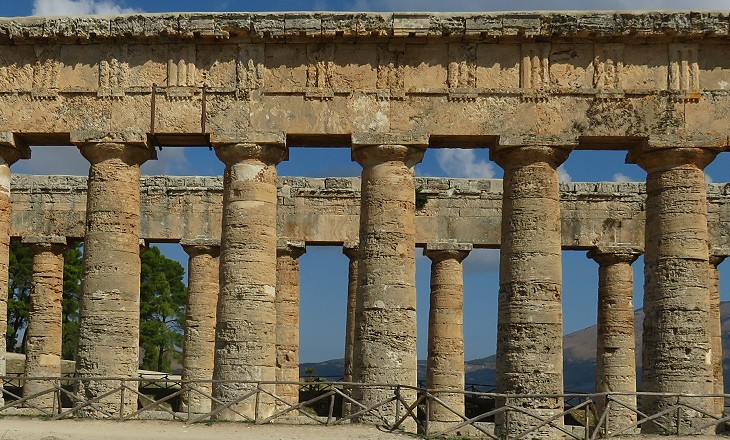 The capitals are simple, but the denticuls and drops of the entablature have a more modern appearance than those of the Paestan ruins. The architrave is built with one large upright stone over the centre of the column between two very long flat ones that reach from one capital to the other. The frieze and architrave are entire all round, and, except in the pediments, so is the cornice. Swinburne
Still less can the temple have ever been overlaid with stucco; but that it was intended to do so, we may infer from the fact that the abaci of the capitals have projecting points probably for the purpose of holding the plaster. The whole is built of a limestone, very similar to the travertine; only it is now much fretted. Goethe

The columns are all standing, two which had fallen, have very recently been raised again. (..) The restoration which was carried on in 1781, has done much good to the building. The cutting of the stone, with which the parts have been reconnected, is simple, but beautiful. The large blocks standing by themselves, which are mentioned by Riedesel, I could not find; probably they were used for the restoration of the columns. Goethe
Archaeological excavations at Selinunte led to finding many metopes which decorated the temples of the town. This did not occur at Segesta, not even in the form of small fragments. The two explanations which have been put forward to explain why the building was not completed could apply also to its lack of decoration. 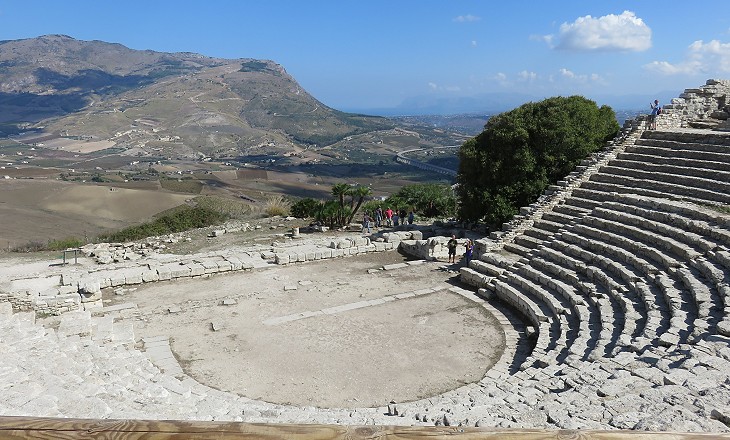 The wearisomeness of winding through the unimpressive ruins of a theatre discouraged us from looking for the remains of the ancient city. Goethe
The form of its theatre is discernible, some cisterns and foundations of houses occur along the declivity. Swinburne 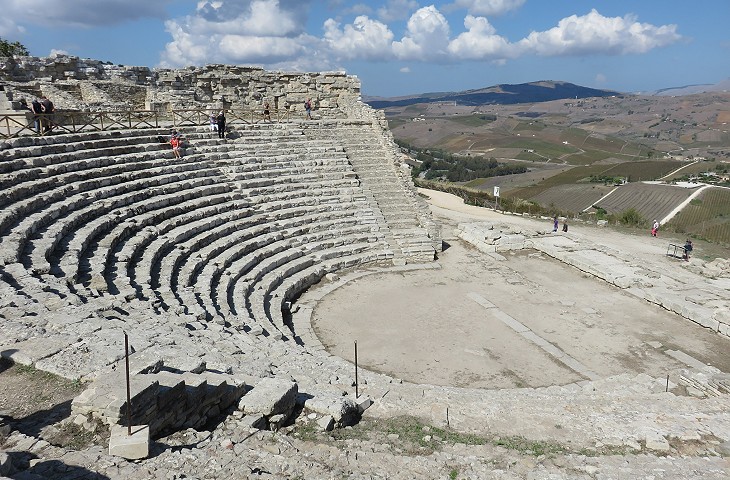 Another view of the Theatre

The construction of the theatre is dated IInd century BC when Segesta was in the sphere of influence of Rome. Because of their common origin from Troy it appears that the town was granted some privileges by Rome, yet it most likely lost importance during the Roman rule of the island. There are no records of Bishops of Segesta and there is no evidence of the large temple having been utilised to nest a church inside it. It is supposed that Segesta was destroyed by the Vandals in the Vth century AD. 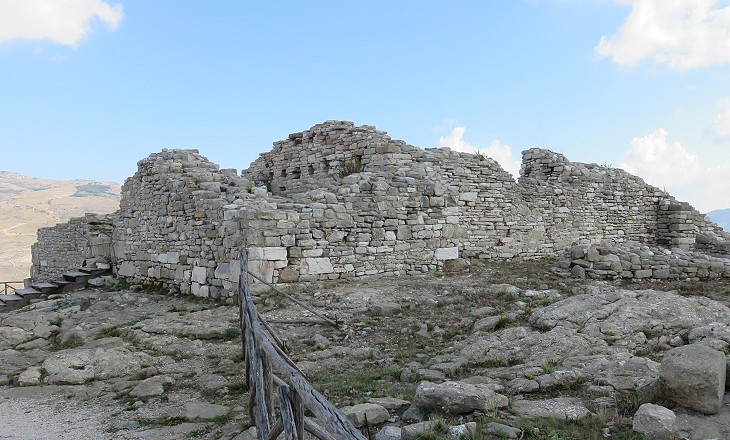 Ruins of a small castle/fortified village near the Theatre

Ruins on the tip of the hill indicate that a small Xth century Muslim settlement was replaced by a castle. It appears that the site was abandoned during the XIIIth century. Even the memory of Segesta was lost and the hill where it stood was known as Monte Barbaro. In 1558 Tommaso Fazello, a Dominican prior and the author of the first printed history of Sicily, suggested that the isolated temple was a building of ancient Segesta. The finding of many coins with the name and the symbol of the town (a dog) in the area of Monte Barbaro confirmed that Fazello was right.