- Akrai
(left) Temple to Hercules at Agrigento; (right) detail of the apse of Palermo's Cathedral 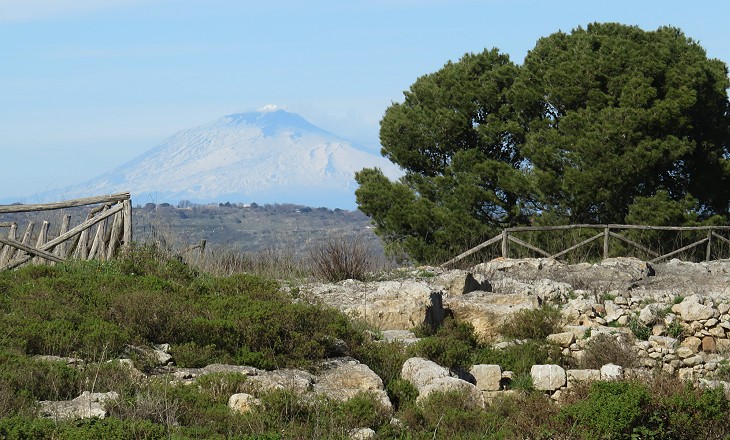 Mount Etna seen from the site of the Temple to Aphrodite in Akrai, an ancient town near Palazzolo. You may wish to see the northern side of the mountain from Taormina

Acrae and Casmenae were built by the Syracusians, Acrae seventy years after Syracuse, and Casmenae almost twenty after Acrae.
Thucydides - History of the Peloponnesian War - Translation by Thomas Hobbes.
Left Noto, and traversed the mountains to Palazzolo, by a very rough and stony road, and through a wild uncultivated country. The situation of Palazzolo is lofty (2,200 ft); and it is celebrated for its magazine of snow, from which the neighbouring cities of Noto, Syracuse, &c. are supplied.
Sir Richard Colt Hoare - A Classical Tour through Italy and Sicily - published in 1819. 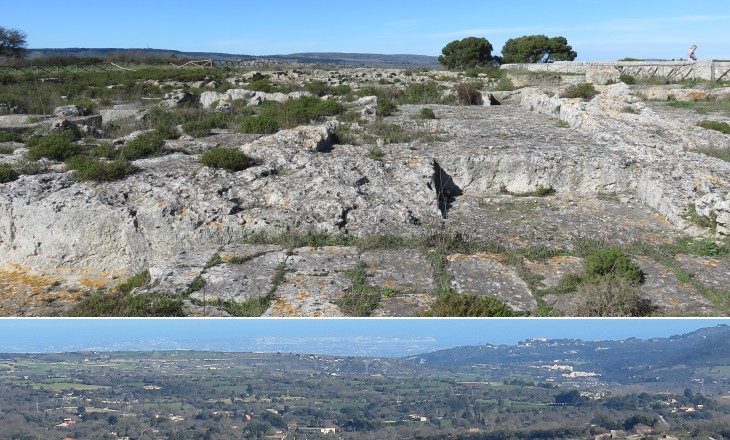 (above) Temple to Aphrodite; (below) view towards Syracuse. The image used as background for this page shows a triglyph of the temple in a small museum attached to the archaeological area

Fazellus (who wrote a history of Sicily in 1558) and Cluverius (who wrote a description of ancient Sicily in 1619) differ with regard to the ancient appellation of Palazzolo. The first supposed it to be the site of Acrae; the latter of Erbessus, which Fazellus places at Pantalica. At all events some ancient city stood near the spot, which I am inclined to think was Acrae; because several medals have been found here, bearing an inscription with that name; and the mountain is still called Acre Monte. Colt Hoare
The site was an excellent look out point over the entire surrounding region. 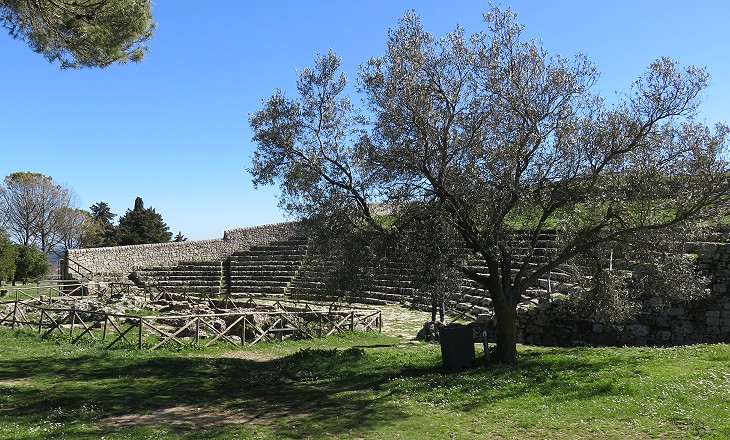 Overall view of the theatre

From Palazzolo to Syracuse 24 miles. Baron Judica receives Travellers with kindness and hospitality: he resides within half a mile of the ancient Town of Acrae (..). The Baron has made several Excavations here; and formed in consequence a Museum (now on sale) of various Antiquities taken from Acrae, but chiefly found in Tombs; remains of which (square or oblong Cavities, delved in natural Rocks) may be seen here; as likewise may Ruins of Public Baths and a Theatre.
Mariana Starke - Travels in Europe for the Use of Travellers on the Continent and likewise in the Island of Sicily - 1838 Edition - based on a travel to Sicily made in 1834. 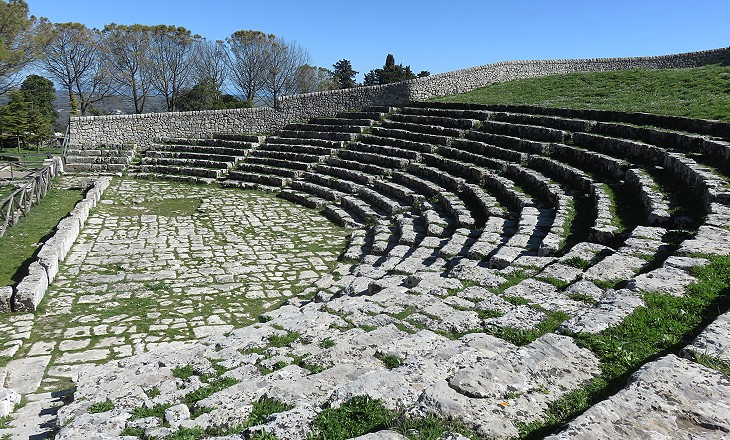 Seating section of the theatre

In 263 BC, during the First Punic War, Hiero II, tyrant of Syracuse switched sides and became an ally of the Romans. He thus managed to retain the independence of his city and the control over a territory which included Akrai. The monuments of the latter are believed to have been built during his long rule which ended in 216 BC. At the end of the Second Punic War Akrai became part of the Roman province of Sicily. 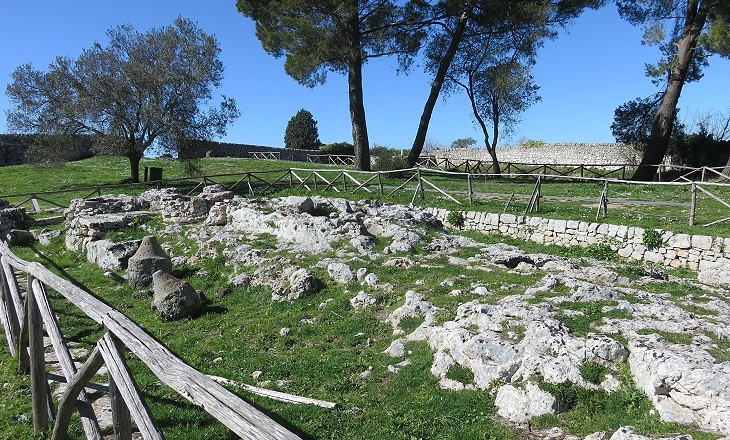 The theatre was excavated in 1820 by Baron Gabriele Judica, a local nobleman who gathered a collection of vases and other artefacts in his palace in Palazzolo. Mariana Starke reports that when she visited him the collection was on sale. He died in misery in 1835. The stage of the theatre was modified by the Romans. 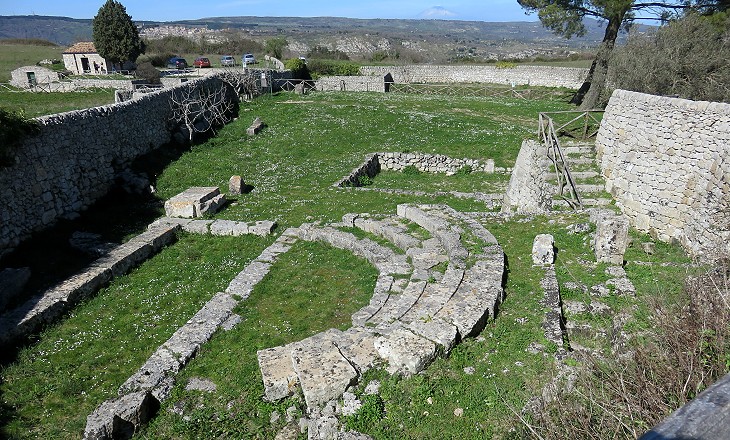 Bouleuterion and other facilities at the back of the theatre

The theatre was built in a central location of ancient Akrai and Baron Judica found evidence of other buildings in its proximity; one of them he assumed to be an odeon, a small covered theatre for music and poetry. Today archaeologists have come to the conclusion that it was the Akrai bouleuterion, the site where the elders of the town gathered to decide about public affairs. You may wish to see the bouleuterion of Priene and a similar building at Agrigento. 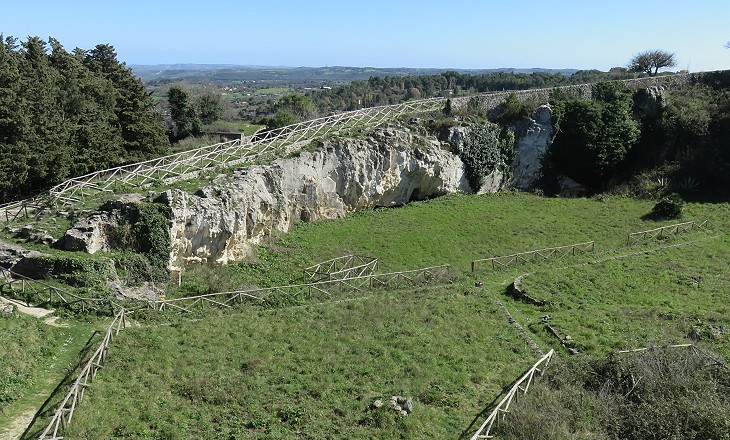 The main monuments of Akrai were built by using stones which were quarried very near the town itself similar to what occurred in Syracuse. A short road directly linked Latomia dell'Intagliata, the main quarry, to the area of the theatre. 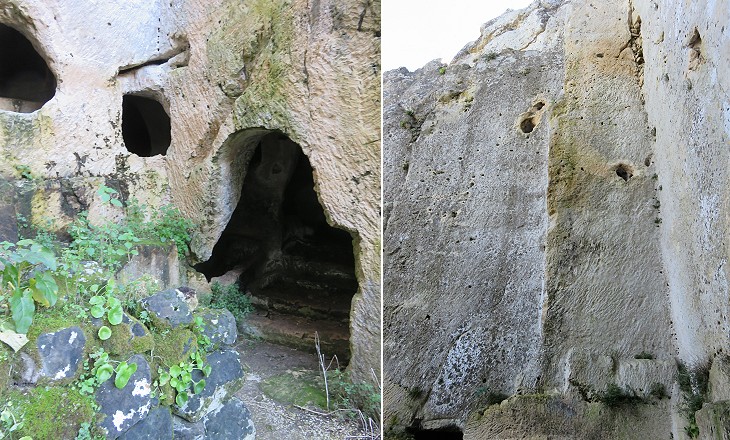 Latomia dell'Intagliata: necropolis carved into the rock with small openings for light and ventilation

On this mountain are very extensive catacombs, similar in shape to those which are scattered throughout other parts of Sicily and Malta: but little scope is left for the investigation of the curious; for many of the passages are closed, and others are become impracticable. Colt Hoare. 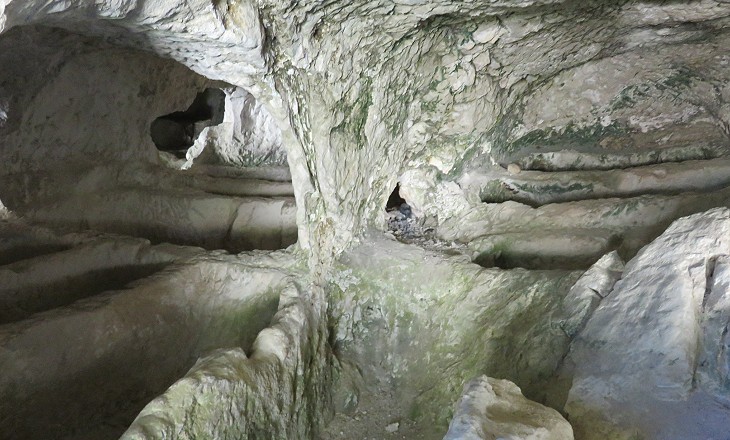 The stone of the quarries could be easily cut and it did not fracture. It was therefore suited to house tombs. When inhumation replaced cremation as the prevailing mode for disposing of corpses the size of these tombs increased. You may wish to see a decorated Byzantine tomb in the introductory page. 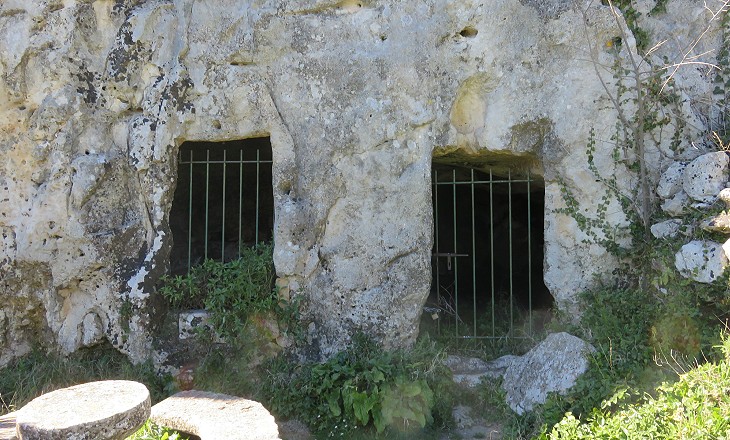 Eventually some of the tombs were modified in order to obtain sorts of rooms. These were inhabited during the Byzantine rule. You may wish to see Eski Gumus, a Byzantine village in the Anatolian tableland which was entirely cut into the rock. 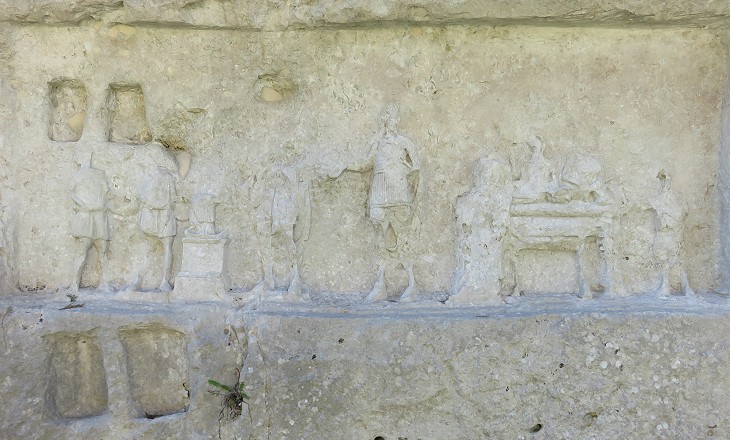 In ancient Syracuse military commanders or other important men were commemorated by portraying them in pinakes, small terracotta or marble reliefs which were placed on the walls of a quarry. In Akrai a large pinax was carved into the stone. The dead, taller than the other figures and in military attire, is portrayed at the centre of the relief. The scene to his left depicts a sacrifice, that to his right a funerary banquet. It is dated Ist century BC. 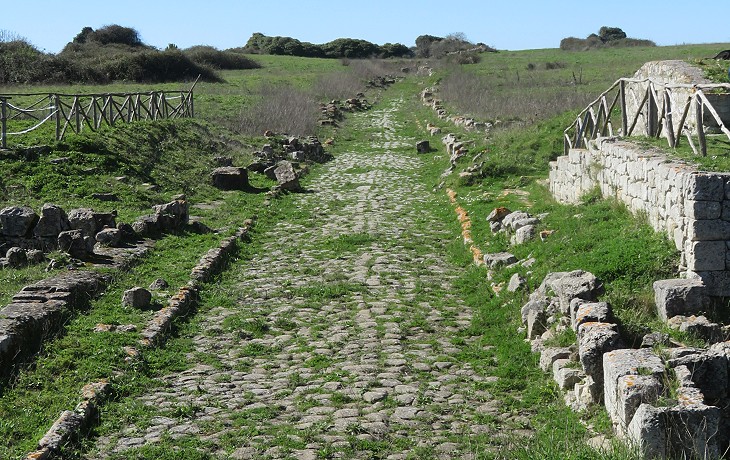 Both Pliny the Elder and the geographer Ptolemy mentioned Akrai among the towns of Roman Sicily. The Byzantine catacombs show that the site was still inhabited during their rule. In 827 the Arabs landed on western Sicily and made a first attempt to seize Syracuse; the Byzantines checked them at Akrai in order to gain time to prepare the defence of Syracuse. The remaining buildings of the town were razed to the ground by the Arabs and the site was abandoned. In the XIIth century the ruins of a palatium, a Roman building which stood on high ground in the valley below Akrai, were turned into a small castle by the Normans. The settlement eventually became the town of Palazzolo Acreide. The reference to Akrai was added in 1862 in order to distinguish it from other Italian towns by the same name. 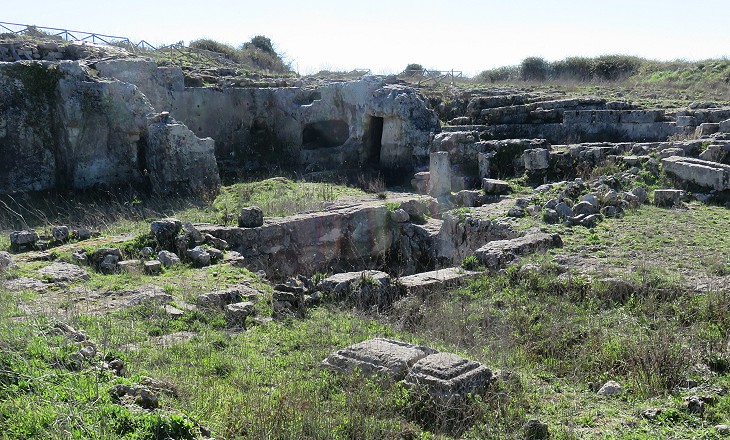 Area currently being investigated near the Temple to Aphrodite

In a small valley beneath, and near a spring which issues from a cavity in the rock, are some fragments of antiquity, which deserve notice for their singularity. They are unlike any others in Sicily, and seem peculiar to this district. In niches, formed in the rock, are figures cut in basso relievo. The principal is a female, the size of life; and it is often surrounded with others, of smaller dimensions. Most of them bear crowns, similar to those usually given to the goddess Cybele. I could discover no traces of any inscription. These sculptures have suffered much from inattention; the forms of several are distinguished with the greatest difficulty, and all the faces are totally destroyed. They have been little noticed by travellers, and no one has attempted to explain their use or signification. Colt Hoare
These reliefs were locally known as I Santoni (The Big Saints) because they were believed to portray saints. At the time of my visit access to the reliefs was not allowed, but you can see them in a photo of the Museum of Palazzolo Acreide (it opens in another window).