You may wish to read an introduction to this section or a page on the main archaeological area and the history of Syracuse first.

A little farther the hill grows contracted and almost covered with the ruins of a fortress probably Eurialus; they are piled up on several hillocks and command a full view of the country on both sides of Syracuse. The city seems to float on the bosom of the waters guarding the entrance of its noble harbour.
Henry Swinburne - Travels in the Two Sicilies. 1777-1780 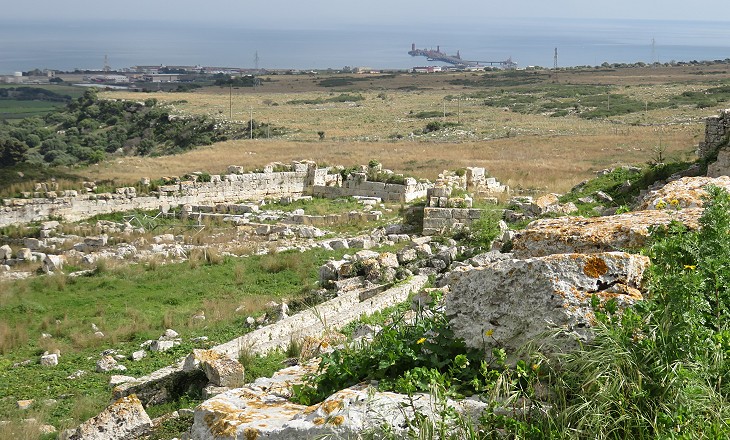 In 405 BC the Carthaginians sieged Syracuse; a pestilence forced them to lift the siege, but their attempt induced Dionysius the Elder, tyrant of the city, to strengthen its fortifications. In 402-397 he built a fortress on a ridge which gently sloped down towards Syracuse to the south, but was more difficult to access from the north. It was linked by walls to the populated area of Syracuse which was four miles away. 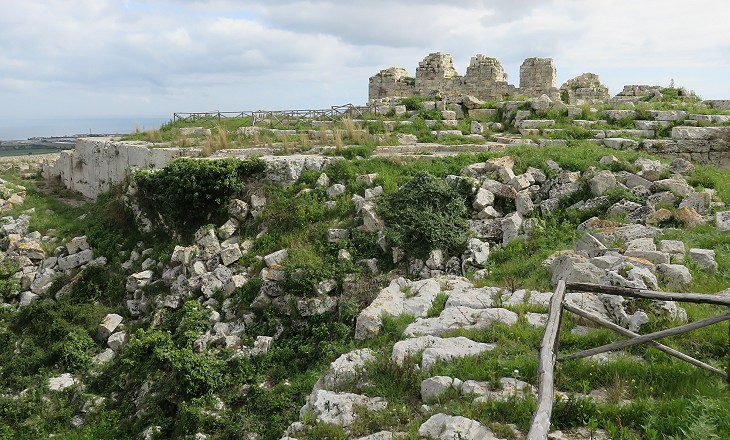 View of the western side of the fortress

Eurialo is not the name of a person or location, but a corruption of Greek eurvelos which means nail having a large head, so it is a reference to the overall shape of the fortress. The point of the nail is at its western end which is not on a higher level than the surrounding area and could therefore be attacked by movable towers and battering rams. 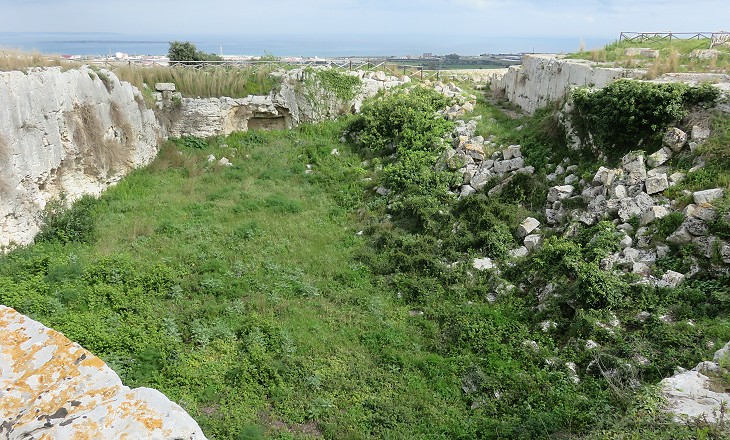 This Fortress was so peculiarly strong that it seems to have been the chief Citadel of ancient Syracuse. (..) The remains of the fortress are still sufficient to show the manner of constructing ancient Grecian Fortresses. (..) On the northern side of the fort are remains of immense Bulwarks and a Long Line of Walls and within the Fort are vestiges of a Well for the use of the Garrison.
Mariana Starke - Travels in Europe for the Use of Travellers on the Continent and likewise in the Island of Sicily - 1838 Edition - based on a travel to Sicily made in 1834.
The western side was protected by three ditches. The area between the second and the third ditch was fortified and could be reached by the defenders via a draw bridge. A military architect of the XVIth century would have called this fortification a ravelin. 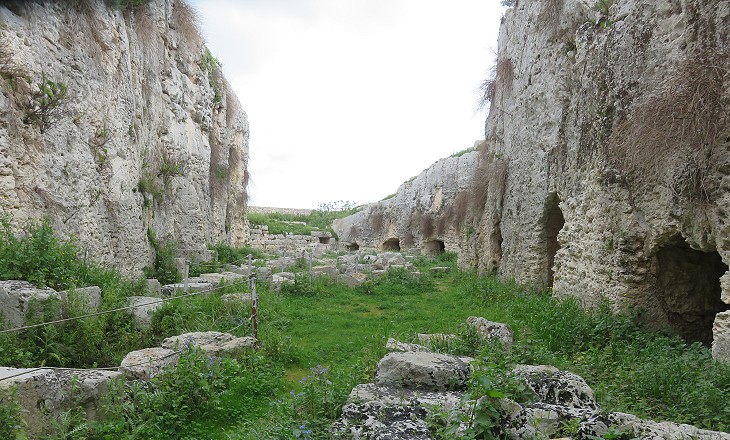 The limestone rock upon which the fortress and Syracuse itself stand can be easily cut and it is not subject to fracturing. These characteristics were exploited to dig a deep and large ditch from which underground galleries led to other parts of the fortress and internal staircases allowed to reach the walls above the ditch. 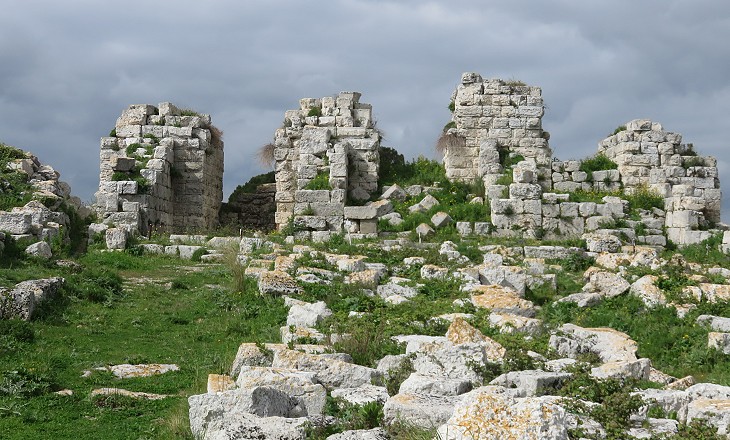 Towers after the main ditch

In fact the catapult was invented at this time in Syracuse, since the ablest skilled workmen had been gathered from everywhere into one place. The high wages, as well as the numerous prizes offered to the workmen who were judged to be the best, stimulated their zeal. And over and above these factors, Dionysius circulated daily among the workers, conversed with them in kindly fashion, and rewarded the most zealous with gifts and invited them to his table. Consequently the workmen brought unsurpassable devotion to the devising of many missiles and engines of war that were strange and capable of rendering great service.
Diodorus Siculus - Bibliotheca Historica - Book XIV - Loeb Classical Library edition 1946
Five towers stood after the main ditch and it appears they were used as platforms from which catapults and other war-engines threw stones and incendiary bolts at a great distance. 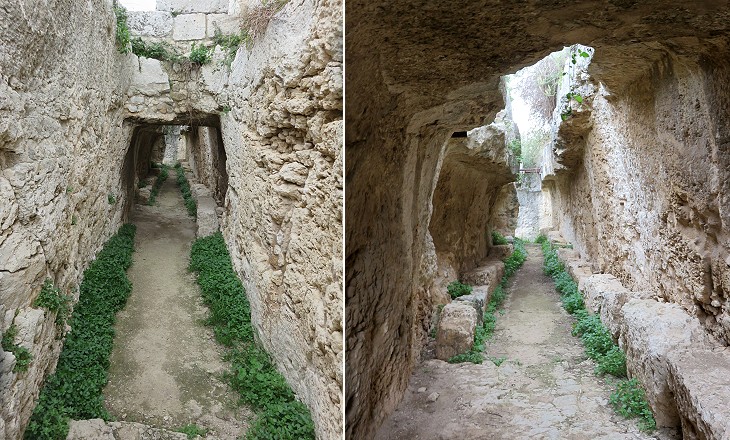 On the western side of the fort there seems to have been a Gateway leading to a Court nearly 200 English feet in length and nearly 50 feet in breadth. In this side also may be traced a deep moat containing an Entrance to a Subterranean Passage which passed under the Fortress and likewise served as a Sally port for the Garrison. This Subterranean Passage is nine feet wide cut through solid rocks and lofty enough to admit cavalry. Starke 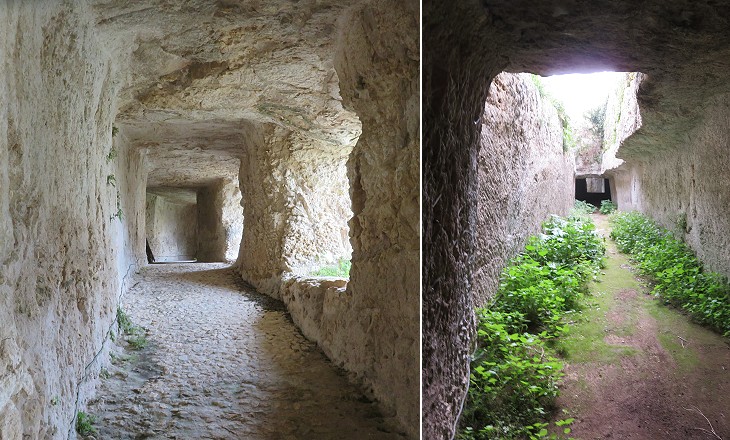 This long underground passage was not used for sallies, but it led to the eastern, wider section of the fortress. The use of underground passages cut into the rock or built on purpose (cryptoporticus) can be noticed in some very early Greek fortifications and in particular in the Citadel of Tiryns. They are a feature also of the northern fortifications of Selinunte which were built slightly before Castello Eurialo by Hermocrates, a politician/general from Syracuse. 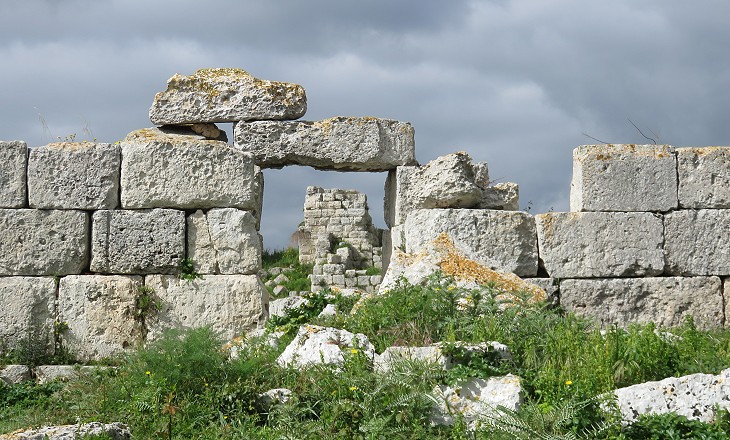 Entrance to the western section

The size of the fortress was large and its effective defence required a similarly large garrison. What was possible for Dionysius and the other tyrants of ancient Syracuse was no longer achievable by the Byzantine strategos (military commander) of Sicily in the IXth century AD. The eastern side of the fortress was abandoned and a new wall was erected to protect the western section. It was entirely built by using the ancient stones so that it has a very old appearance. The resources available to the Byzantine commanders must have been very limited because Castello Eurialo was not strengthened with some of the construction techniques which had been used for the walls of Constantinople. 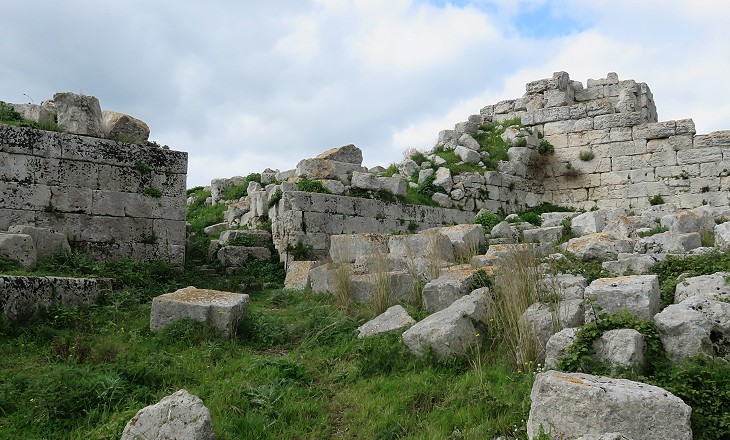 In 827 the Arabs landed on the western coast of Sicily. Fifty years later they laid siege to Syracuse and after nine months they entered Ortigia. It does not appear that they or the rulers of Sicily who came after them made use of Castello Eurialo. The fortress became a quarry; parts of the wall of the eastern section are no longer identifiable. 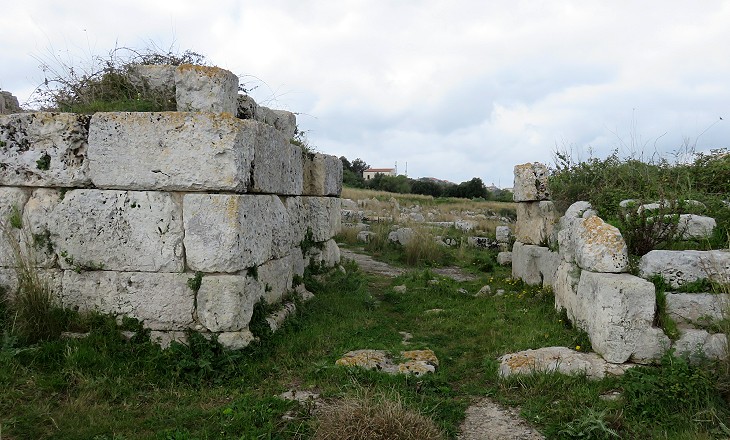 Ancient gate of the eastern section

The image used as background for this page shows a XVIth century portrait of Dionysius the Elder.