- Roman Saint-Bertrand-de-Comminges
(relief at Glanum and quotation from Pliny: "It is More Similar to Italy than to a Province")

(above) The Pyrenees seen from Saint-Bertrand-de-Comminges; (below) the River Garonne near the town

A ruinous tower on a pointed rock, served formerly as a guard to the pass into Spain, which is a gloomy, narrow dell, a mere crevice in the mountainous line: were it not for this break, the boldest traveller would find it almost impracticable to pass this natural barrier of the two kingdoms. (..) At this point a landscape presented itself, which may claim a very high degree of pre-eminence among the sublime scenes of nature: an amphitheatre of mountains, beautiful both in form and woody covering, close in the horizon on the southern aspect; (..) a second mighty chain of mountains on the east side is broken by a chasm lined with white cliffs, through which the Garonne issues majestically out of his native wilderness, to flow henceforward without impediment, through rich and boundless plains, and to transport their productions many hundred miles to the ocean. The river is even here of a noble breadth and depth, and carries barges of considerable burden. Towards the north the valley expands on each hand, cultivation and population increase, the mountains seem to draw back and every thing announces a quick change from wild nature to the improvements of human industry.
Henry Swinburne - Travels through Spain in the Years 1775 and 1776 to which is added a Journey from Bayonne to Marseille. 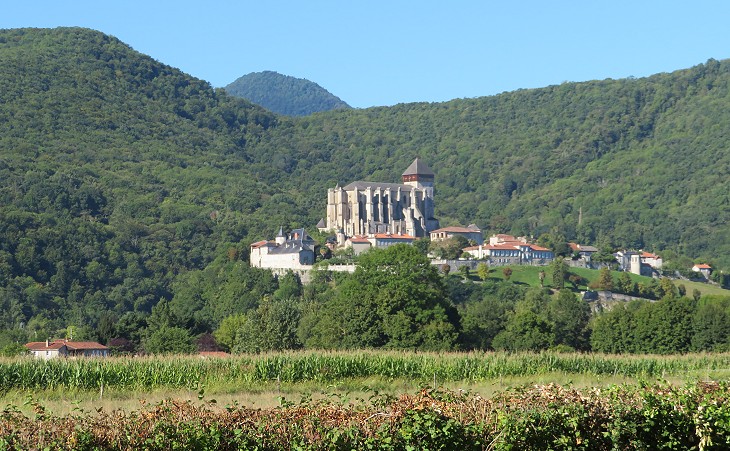 Lower down, we passed in sight of Saint Bertrand, the capital city of the country of Comminges, situated on a round knoll, backed by woody mountains. The steepness of the hill, the serpentine course of the river, and the massy steeples of it's cathedral, give it a striking resemblance to' the city of Durham. (..) We shall quit this valley with regret, and long remember with gratitude the pleasant hours we have spent here. Swinburne
The Vale of the Garonne vista is terminated by the grand peaks and ridges attached to the Monts Maudits, ranking among the highest of the Pyrenees, at whose foot on the S rises the Ebro and on the N the Garonne. It is a truly magnificent view. (..) On the Garonne rt bank lies the ancient and curious walled town of St Bertrand de Comminges (Lugdunum Convenarum) situated upon and around a solitary rock rising picturesquely out of the plain. Its summit is crowned by a Gothic church, the finest among the Pyrenees, in the Pointed style.
John Murray III - Hand-book for Travellers in France - 1843
Lugdunum Convenarum was founded on the top of the hill in 72 BC by Pompey to protect a route across the Pyrenees between Spain and Tolosa Tectosagum (Toulouse), an important town on the River Garonne. It is likely that the top of the hill already housed a shrine, because it afforded a grand view over some mountain peaks which the Gauls regarded as sacred sites. The first inhabitants were Roman veterans, perhaps former supporters of Marius who were defeated by Pompey, and members of tribes living on the Pyrenees who helped the Roman commander. The suffix dunum is a Gallic word for "fortified town"; Convenarum most likely meant "of the gathered ones" to indicate the different origins of its inhabitants and it distinguished this town from another Lugdunum (Lyon) at the confluence of the Rhône and Saône rivers. Lugdunum Convenarum: main monuments of the Lower Town seen from the Theatre

In 56 BC troops sent by Julius Caesar conquered the territories west of the Garonne valley and in 27 BC Lugdunum Convenarum was included in the new province of Gallia Aquitania by Emperor Augustus. In 19 BC Marcus Vipsanius Agrippa subjugated the last independent tribes in the mountains of Northern Spain, thus the whole of the Iberian peninsula and of Gaul were in full control of the Romans. Lugdunum Convenarum lost its military relevance and could expand in the area at the foot of the hill. It moved from being an oppidum (fortress) to becoming an emporium (trading centre). The Triumph of Rome over Spain and Gaul was celebrated in a monument which stood in the Lower Town and is now at the Archaeological Museum of Saint-Bertrand-de-Comminges. 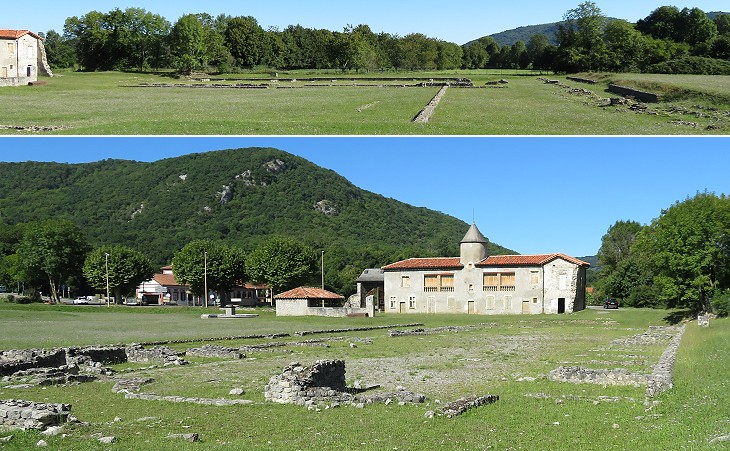 Lugdunum Convenarum: views of the Forum (above) and of the adjoining "Macellum" (below), an indoor market, see that of Leptis Magna

The existence of Roman remains at the foot of the hill were first reported in the XVIth century. Excavations began in the early XXth century and were conducted at intervals over a very long period. They concentrated on unearthing the very centre of the Roman town. A farm housed the first archaeological museum which was eventually moved to the Upper Town. 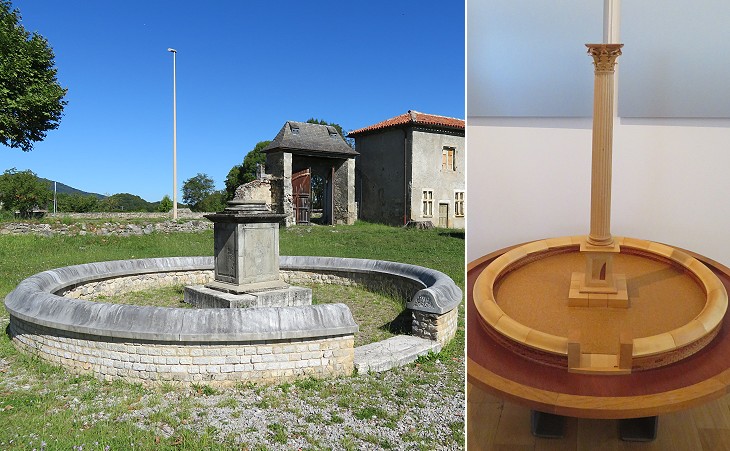 Lugdunum Convenarum: Circular Monument and a possible model of it at the Archaeological Museum

The most recent campaigns (ca 1985) identified the site of a circular monument near the Forum; it was built in the second half of the Ist century AD around the pedestal of a column or of a statue which already existed. It was most likely placed at a crossroads of the orthogonal grid of streets which characterized the layout of Roman towns. 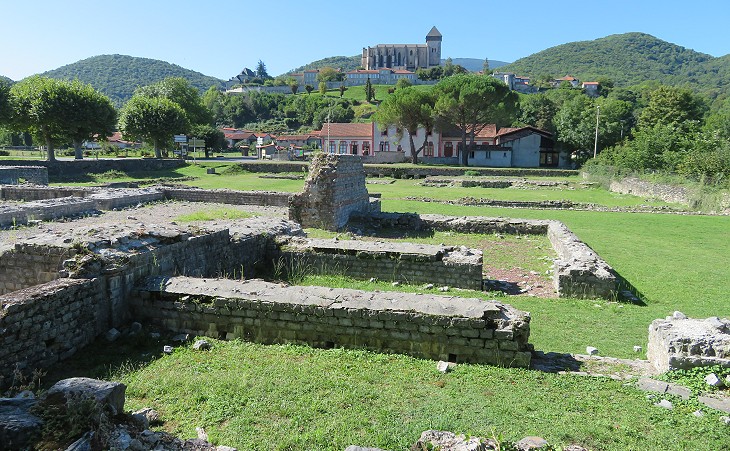 Lugdunum Convenarum: Baths of the Forum and Temple behind them (Ist century AD)

Latin inscriptions refer to the town as a civitas, thus meaning that its inhabitants had most of the rights of the Roman citizens and were therefore in a legal position superior to that of the peregrini, free inhabitants of local descent, of many nearby settlements. It is likely that the Roman governors of the provinces recommended municipal authorities to erect temples and facilities which would underline the status of their towns. One of them was a Capitolium, a temple dedicated to Jupiter, Juno and Minerva, the three gods who were worshipped on the Capitoline Hill of Rome. It was meant to symbolize the loyalty to Rome and Capitolia have been found in very many locations from Thugga in Tunisia to Scarbantia in Hungary. Archaeologists did not find evidence of three deities being worshipped in the temple in the Forum of Lugdunum Convenarum; it might have been dedicated to "Goddess Rome and Augustus", as at Vienne or Athens, and it served the same purpose as a Capitolium, which some suggest was in the Upper Town. The most of the ocean-coast of the Aquitani is sandy and thin-soiled, thus growing millet, but it is rather unproductive in respect of the other products.(..) The interior and mountainous country, however, has better soil: first, next to the Pyrenees, the country of the "Convenae" (..) in which are the city of Lugdunum and the hot springs of the Onesii (at Bagnères/Baths of Luchon, south of Saint-Bertrand-de-Comminges).
Strabo - Geography - Book IV - Loeb Edition
Strabo wrote his book at the time of Emperor Tiberius (14-37 AD) and the main monuments of Lugdunum Convenarum are of the Ist century AD when the town most likely reached the peak of its development. A short aqueduct provided the baths and public fountains of the town with water from a mountain spring. 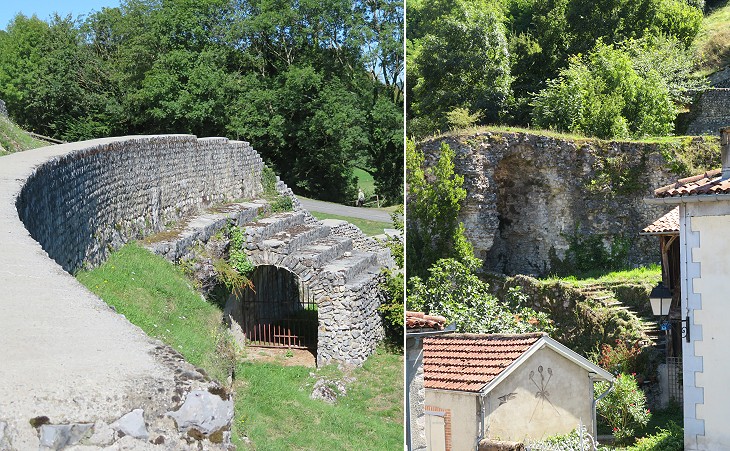 The theatre was built utilizing the slope of the hill, something which helped its construction, but required strong walls to prevent landslides; it could house an audience of 5,000. The entertainment facilities of the town were completed by a small amphitheatre. According to a passage by Flavius Josephus, Emperor Caligula exiled Herod Antipas and Salome at Lugdunum Convenarum; they might not have liked the decision, but perhaps they did not dislike the place. 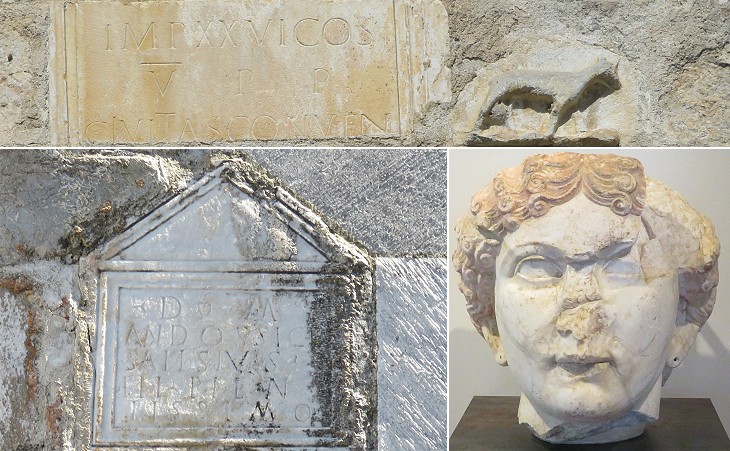 (above) Inscription celebrating Emperor Claudius in the year 52 AD and showing the name of the town as "Civitas Conven(arum)", now at Porte Cabirole at Saint-Bertrand-de-Comminges with a small relief of a she-wolf; (below-left): tombstone on the façade of the Cathedral (the name Andossic is of local origin); (below-right) Archaeological Museum: head of Agrippina Minor, Claudius' second wife

Some Latin inscriptions were found in 1719 and were placed at the entrance of the tiny medieval town or outside the Cathedral; the archaeological excavations did not add very much to the knowledge of the history of the Roman town; they confirmed that the Ist century AD was its most prosperous period, whereas by and large most provincial towns erected their largest monuments in the IInd century AD. The image used as background for this page shows a Roman relief on a house near the Cathedral. 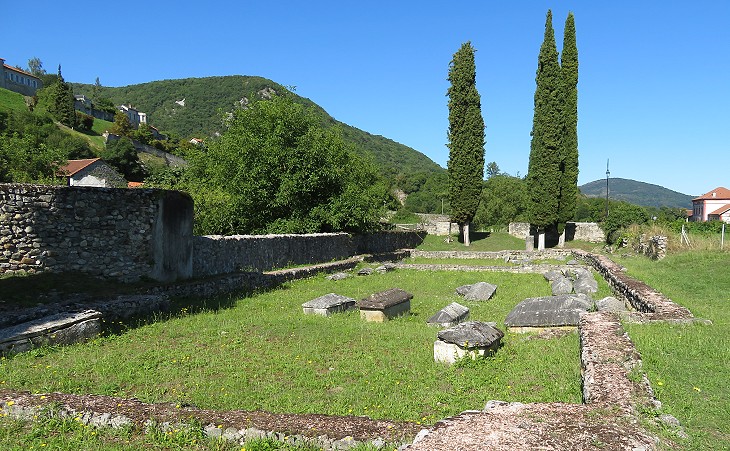 Evidence of an early Christian basilica was unearthed in 1914-1926. The site was studied again in the 1990s. The church was built at stages over two houses; the presence of 28 buried sarcophagi suggests it had a funerary purpose, similar to what can be noticed at Tipasa in Algeria and Salona in Dalmatia. It is dated Vth century when the town was already a bishopric see. Lugdunum Convenarum was sacked by the Vandals in 409 and a few years later it was assigned with the whole of Aquitaine to the Visigoths by Emperor Honorius; records of bishops exist for the period 506-588. The town was destroyed in 585 during a rift between Merovingian rulers of Northern and Central France, one of whom sought refuge there. 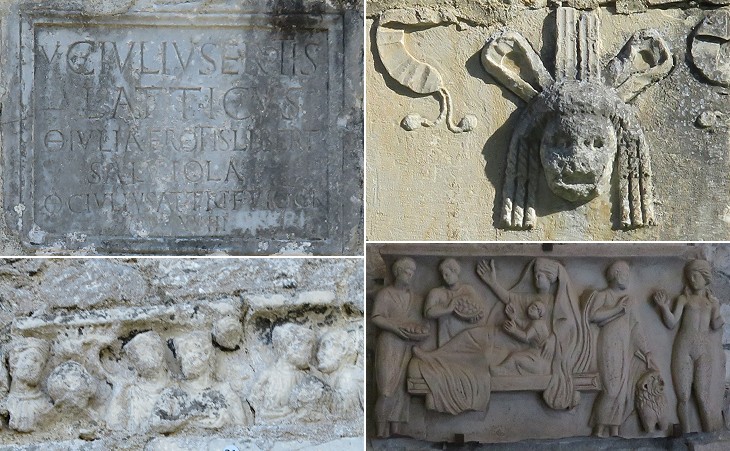 Saint-Just-de-Valcabrère: (above-left) funerary inscription of freedmen from the necropolis; (above-right) mask which decorated the theatre; (below-left) fragment of sarcophagus; (below-right) fragment of a Christian sarcophagus found in 1988: it depicts a funerary banquet and perhaps Thecla, a follower of St. Paul (portrayed near her), with a lioness which protected the martyr when she was exposed in the arena of Tarragona

A Romanesque church surrounded by a graveyard was built in the XIIth/XIIIth centuries on the site of a Roman necropolis, one mile south-east of the Forum. Materials from the necropolis and some ancient monuments were utilized with a decorative purpose, both outside and inside the building. Some of them show a good level of execution owing to the availability of marble quarries in the valley (see some spectacular reliefs which were found at a Roman villa north-east of the town). 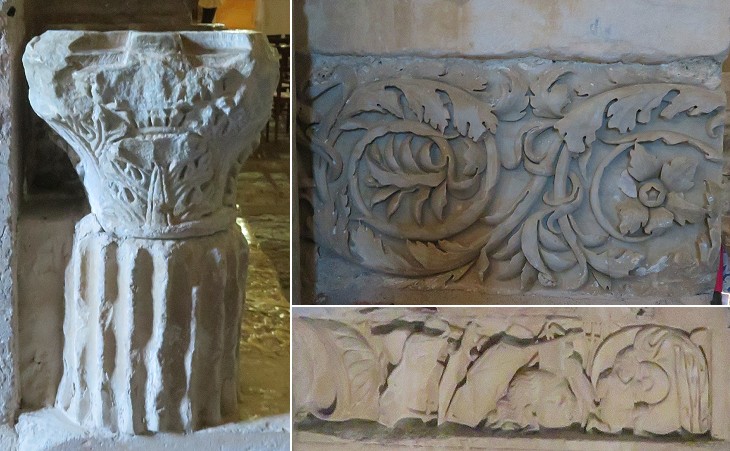