- Some Medieval Monuments of Toulouse
(relief at Glanum and quotation from Pliny: "It is More Similar to Italy than to a Province")

You may wish to see an introductory page to this section or pages on Roman Toulouse and on Basilica of Saint-Sernin first.

In the eighth century the Goths were subdued by the Saracens, who in their turn were driven back into Spain by Charles Martel, and his son Pepin. Charlemagne established earls at Toulouse, who soon after became sovereign princes; their posterity reigned four hundred years; but in 1208 Raymund the Sixth drew upon his head the vengeance of the Holy See, by assisting his subjects, the heretics of Alby, against whom the Pope had published a Crusado. The chief of the holy confederacy was Simon de Montfort; he defeated the earl, and as the reward of his valour, received the earldom from the hands of his fellow soldiers: Amaury de Montfort, his son, being too weak to preserve his father's conquests, sold them to the king of France, who forced Raymund the Seventh to sign a treaty, by which he abandoned all his possessions, except the diocese of Toulouse, and that also eventually on failure of his issue. By the death of his only daughter in 1271 (and of her husband Alphonse, brother of the King of France), the earldom fell to the crown of France, in consequence of the aforesaid agreement (with the exception of Comtat Venaissin which was bequeathed to the Pope).
Henry Swinburne - Travels through Spain in the Years 1775 and 1776 to which is added a Journey from Bayonne to Marseille. Saint-Raymond, a former hospital / college for poor students of the Abbey of Saint-Sernin; today it houses the Archaeological Museum

Toulouse is the capital of Languedoc. (..) The streets are large and handsome; and the town walls, as well as the houses, are built of brick.
Thomas Nugent - The Grand Tour - 1749
The circumference of the city is about four miles: its streets are roomy, and houses well constructed; some of them are grand and spacious, but there is a gloominess in the colour of the brick with which they are built. Swinburne
In the neighbourhood of Toulouse little or no stone is to be found, and during the middle ages brick was the usual building material. It was used with nice discernment of its properties as distinct from those of masonry.
Thomas Graham Jackson - Gothic Architecture in France, England, and Italy - 1915
It is possible that the decorative opportunities offered by bricks were suggested to the medieval master masons by the remaining evidence of Roman buildings similar to the tombs which can still be seen along Via Appia Antica and Sepolcro di Annia Regilla. 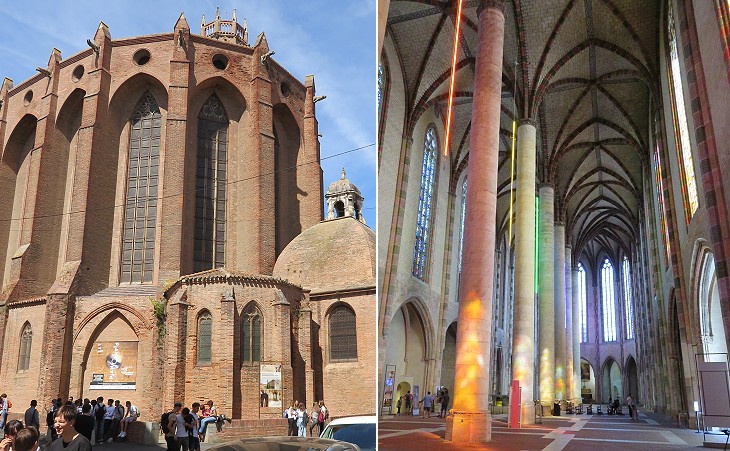 The Toulousains are so noted for devotion, that I was not surprised to see their city crowded with churches, and half its extent occupied by convents stocked with many coloured inhabitants. Swinburne
The Dominican convent is remarkable for the body of S. Thomas of Aquin. Nugent
The Dominicans were known in some parts of France as Jacobins, because their first house in Paris was situated in Rue Saint-Jacques. The Jacobins, one of the most influential factions of the French Revolution, were so named because they used to meet in a former Dominican convent. St. Thomas Aquinas, a Dominican monk and the greatest theologian of his time, passed away in 1274 at Fossanova in the Pontine Marshes south of Rome. His remains were moved to Toulouse in 1369, but the Cathedral of Priverno, near Fossanova, claims to house his skull and other bones. 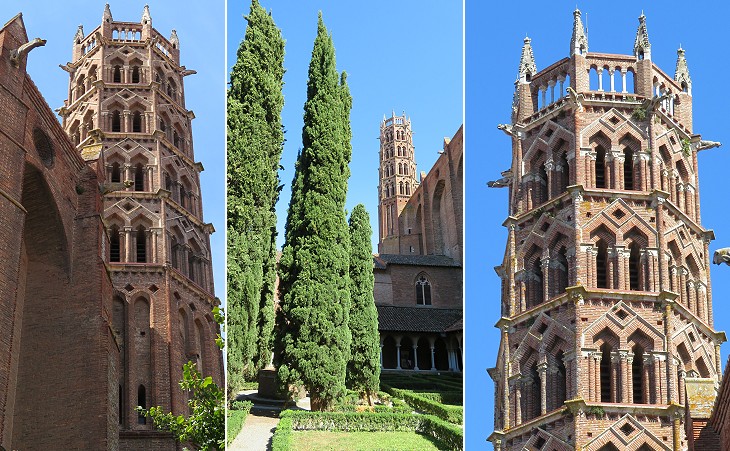 The Church of the Jacobins surmounted by a conspicuous brick tower rising in arches having straight angled heads, is of vast size and of brick like the other churches. It has become a barrack and is divided by floors, the lower story serving as a stable for artillery horses.
John Murray III - Hand-book for Travellers in France - 1843
The tower of the Jacobin convent at Toulouse dating from the end of the 13th century is a typical example (of the use of brick). The architect has avoided the trouble of getting moulded bricks as much as possible, and has economised stone to the utmost. The only masonry consists in the capitals and string-courses. The shafts at the corners of the octagon and elsewhere are of shaped bricks, but for the window heads ordinary plain bricks are ingeniously made to serve by means of straight-sided arches instead of curved. The effect is excellent and gives the tower a character of its own. The stages diminish as they rise, the outline leaves nothing to be desired, and the design is altogether delightful. There does not seem ever to have been a spire on this tower. Jackson 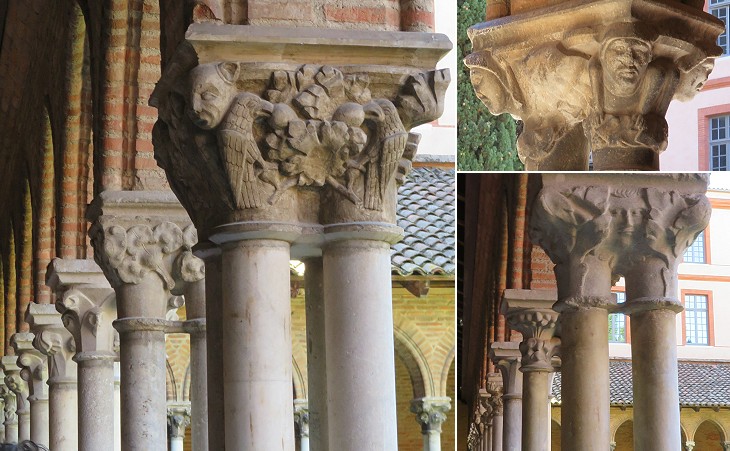 Capitals of the Cloister of Couvent des Jacobins

The occupation of the convent by the French Army lasted until 1865; at one point the total dismantlement of the building was considered to make room for a more functional barracks. Damage was considerable: the walls of the church were whitewashed, all altars were removed and the stained glass was destroyed; the cloister lost two of its wings and it eventually became a playground for the pupils of a nearby school. The reconstruction of the cloister began in the 1950s. 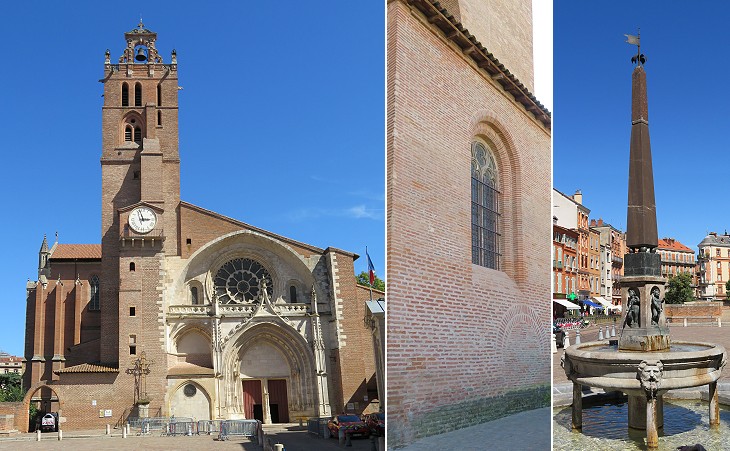 The Cathedral Church is named St-Estien, which is very great and wel built, having 14 Chapels about it.
Francis Mortoft's Journal of his travels in France and Italy in 1659
The cathedral dedicated to S. Stephen is remarkable for several handsome chapels, a monstrous large bell, and a magnificent choir. It stands in a large square, adorned with a fountain without water, on which there is a handsome obelisk. Nugent
The Cathedral or Eglise St Etienne chiefly remarkable for the irregularity and want of concord in all its parts. The large rose window is out of the line of the centre of the main portal immediately below it; the centre of the nave is parallel with the side aisle of the choir and its two walls do not correspond. (..) The tower is singular from its form having two broad sides and two narrow. Murray 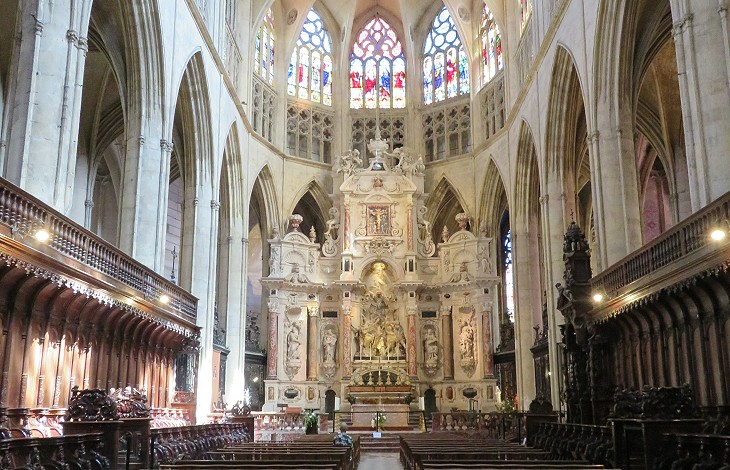 Count Raymond's construction is the oldest part of the church and was doubtless intended to be removed by those who raised the more elegant Gothic Choir. It was begun 1272, but not roofed until 1502. Murray
The coverage of the medieval monuments of Toulouse and of other French towns in this section focusses on the Romanesque ones, because of their artistic links with the ancient ones. You may wish to see pages dealing with Saint-Trophime at Arles and the Abbey of Saint-Gilles, two Romanesque monuments with many points in common with those of Toulouse. 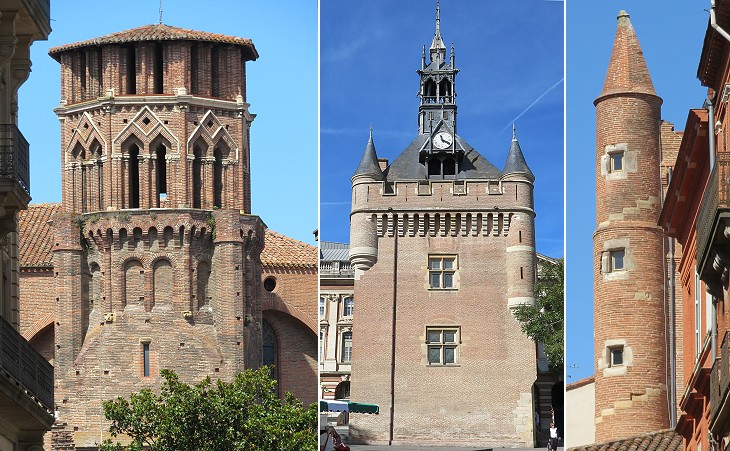 There is another tower in Toulouse at the Augustine convent, now the museum, very like that of the Jacobins, but it is imperfect and the lower stage differs. Jackson
The Donjon du Capitole was actually the Tour des Archives, a 1529 building which Eugène Viollet-le-Duc, the acclaimed restorer of many medieval monuments, saved from dismantlement in 1873 by turning it into a keep. In 1887, after the architect's death, some reservations were expressed in the official Bulletin Monumental: The keep, classified as a historic monument, has been restored by Viollet-le-Duc, who gave himself up to fantasies, of which he has left us so many examples in his restorations (e.g. at Reims and Narbonne). The machicolations were redone in disproportionate proportions and surmounted by a large battlement. In place of the modest roof that surmounted the old building, he designed a high roof, crowned by a belfry recalling the architecture of northern France and not that of the banks of the Garonne.
Viollet-le-Duc had an influence on the restoration of medieval monuments also outside France, e.g. at the Alcazar of Segovia and at Gradara. 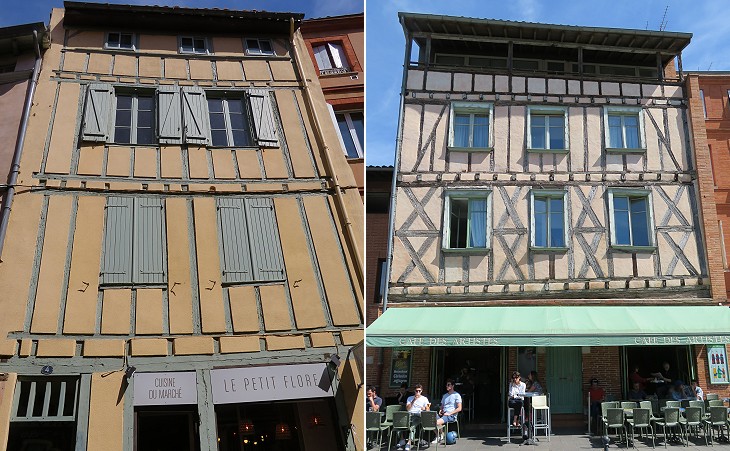 Old houses near the former harbour; the image used as background for this page shows a decorative brick and timber pattern of another old house; you may wish to see other houses with timber framings at Saint-Bertrand-de-Comminges, at Le Mans and in Germany (Limburg an der Lahn), Greece (Kastoria) and Turkey (Safranbolu)

The main monuments of medieval Toulouse are characterized by the use of bricks; those who could not afford this material, used timber framings which were filled with cob. The houses of that period must have resembled those which were built at a later time near the river harbour, in what today is a trendy neighbourhood.