You may wish to see a page on the fortresses of Corfu first.

The mainly neoclassical housing stock of the Old Town is partly from the Venetian period, partly of later construction, notably the 19th century. As a fortified Mediterranean port, Corfu's urban and port ensemble is notable for its high level of integrity and authenticity. (..) The urban and port ensemble of Corfu, dominated by its fortresses of Venetian origin, constitutes an architectural example of outstanding universal value in both its authenticity and its integrity.
From the UNESCO synthesis of the universal value of the Old Town of Corfu which in 2007 was added to the World Heritage List.

The old town and the New Fortress seen from the Old Fortress; in the foreground the Esplanade

To the Westward of the Sea Fort is a large place, which they call the Splanade; from the middle of which beginneth a large street, that runneth Westward thorough the City.
A journey into Greece by George Wheler, Esq., in company of Dr. Spon of Lyons - 1682
The old town of Corfu is in a way a new town; until the early XVIth century the centre of the town was inside the Old fortress. It was moved to its current location when the Venetians built a new fortress to the west of the existing one. The new town developed in the space between the two fortresses and was surrounded by walls.

S. Maria del Rosario and the nearby quarter seen from the New Fortress

However beautiful the works of nature are in Corfu, art displays very little that is pleasing to the eye. My reader will, therefore, forgive me, if I mention nothing concerning the large houses, there named palaces, and the churches of the Fortress and town. The smallest town in Italy is better supplied in this respect. (..) The edifices lately built by the English are the only worthy of notice.
Christian Muller - Journey through Greece and the Ionian Islands: in June, July, and August, 1821
The layout of this neighbourhood resembles very much that of Venice with tall buildings (due to the shortage of space in relation to the population), a maze of narrow streets and small piazzas around a church.

In the Esplanade stands the marble statue of the brave Count Schulenburgh. It is of good workmanship, but of that quaint appearance which prevailed at the beginning of the last century. Muller
Francesco Morosini skilfully presided over the defence of Candia: the town eventually fell in 1669 after a siege which lasted more than twenty years, but Morosini managed to negotiate a honourable peace agreement. In 1684 Venice declared war on the Ottomans: Morosini conquered Santamaura, Vonizza and Preveza; in the next year the Venetians conquered most of Morea and in 1687 Morosini laid siege to Athens which was occupied after just six days. In 1688 Morosini was elected Doge, the chief magistrate and leader of the Republic. The monument portrays him wearing Corno Dogale, a stiff horn-like bonnet, which was made of brocade. It is interesting to note that the monument was built in 1690 when Morosini was still alive, a honour which the Republic of Venice very rarely granted.
Another exception was made for Johann Matthias Count von Schulenberg who was in charge of the defence of Corfu during its 1716 siege: the statue is a work by Antonio Corradini, a leading Venetian sculptor: he portrayed Schulenberg as an ancient Roman emperor, but wearing Renaissance armour and an XVIIIth century wig, similar to what can be noticed in another monument to him at Verona. Corradini is best known for his statues of veiled women, e.g. the Vestal Virgin Tuccia.

Wandering in the old town

June 21. 1821 - The town is tolerably large, containing about seventeen thousand inhabitants. It is walled round. (..) The streets are narrow and dirty, and the pavement totally neglected. The houses are very old, and two or three stories high, with small arcades on either side of most of the streets.
John Madox - Excursions in the Holy land, Egypt, etc. - 1834
The statement by UNESCO makes reference to mainly neoclassical housing stock, but the character of the neighbourhood near the New Fortress is rather a concentration of Mediterranean atmosphere.

On the right hand, in this street, standeth the Cathedral Church, dedicated to Saint Spiridion, first Bishop of that place, whose Body they are perswaded they have, and there with great Veneration preserve it. They attribute to him the doing a Miracle about Thirty-five years since, restoring the sight to a blind man, who came, and prayed to him, prostrating himself before his Body. And of this they keep an Annual remembrance ever since; which happened when we were here. They make profession of the Greek Religion; but are in most things Latinized, except in Obedience to the Sea of Rome, the Infallibility of the Pope, and the Procession of the Holy Spirit. They have not a Greek Bishop allowed them; but there is a Latin one, and a Protopappa Greek. This Church is well furnished with Silver Lamps; and one of Gold. Wheler
Corfu used to be called the border of the E. The city is now completely Italian, and oriental customs are only to be seen, such as they are in Venice, as exotics. Muller

This small square is not easy to find, but it is worth the effort: in 1690 Antonio Cocchini, member of a prominent family in the Ionian Islands, built a pretty well-curb PRO COMMUNI BENEFICIO (the inscription is written also in Greek). The area is rightly called Campiello, the name given in Venice to small piazzas. You may wish to see some wells in Venice and Chioggia.

Venetian well-curbs: (above) in the Old Fortress; (below) relocated to the Esplanade

Italian manners prevail in the interior of the houses, in the public amusements, and in the language; in fact, they have been adopted by all, except the lower orders of the people. We need only look at the coffee-houses, which play so distinguished a part in Italy. Are they not till midnight the rallying-point of both sexes? If you go into the interior of the families, you find as little relish for society, and domestic pleasures as in Italy. All their affections are turned abroad, towards public assemblies, the theatre, promenades, and coffee-houses. A magic circle seems drawn round the house, which a stranger can but rarely pass. They will there submit, in private, to all possible privations, if, by such sacrifices, they can preserve splendour, or at least a decent appearance in public. Muller
Other well-curbs may not be the work of prominent artists, but they add to the Venetian character of Corfu.

I did not visit the theatre. It is only open during the autumn and the carnival season, and only Italian comic operas are performed in it. Rossini's airs I also heard there in every street. Muller 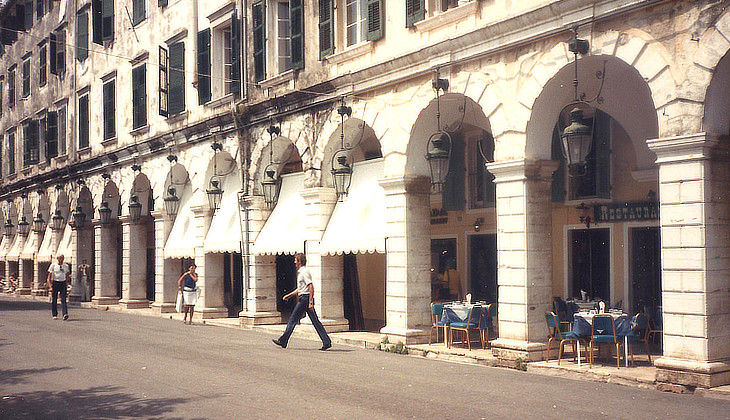 After traversing the wretchedly paved streets of the city, which leans against the side of a hill, you arrive, without having met with any building of note, on the spacious and beautiful place called the Esplanade. On the north-side of it, detached from all other houses, rises the palace, which is now building by the English government for the lord-high-commissioner. On the west-side of the esplanade, to the right of the palace, a row of fine houses with arcades, fronting the esplanade, have been built during the English administration. Here is the British hotel, the best, and indeed the only good inn in Corfu, fitted up in the English style, and calculated for English purses. Here are, also, the houses of the Austrian and Turkish consuls. Under the arcades are billiard-rooms, coffee-houses, and reading-rooms. Muller
Venetians military architects left a wide empty space between the Old Fortress and the first buildings; it was a safeguard in case the Ottomans managed to seize the New Fortress and enter the town: they would not be able to hide behind houses when launching their assault on the last Venetian stronghold. The site is still called Spianada after the Italian word spianata, meaning a large flat ground: the French turned it into a garden flanked by a series of buildings with porticoes; the British added a large neoclassical residence for the governor. 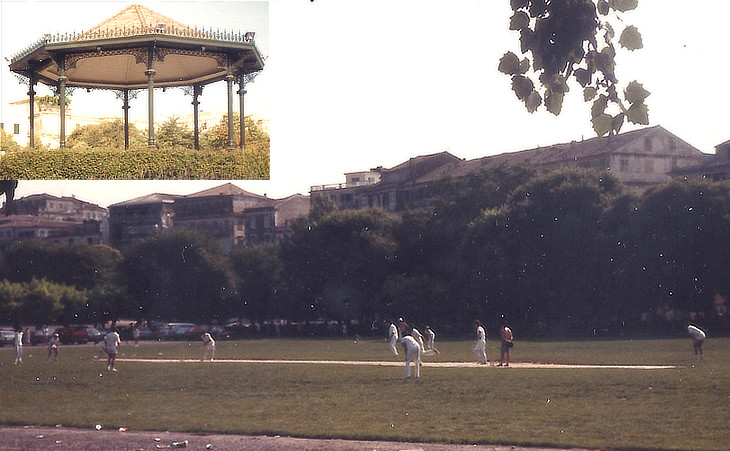 The part of the town with which the traveller is peculiarly struck is the esplanade, which, while any vegetation remains, is a delightful green, extending between the town and the ditch, which separates the fortress from it. Round it is an excellent promenade between a double row of trees, where a band of music plays every evening. This affords recreation to the inhabitants of the town, the garrison, and strangers; but in the middle of the day the greater number of the people keep within doors, and those few who go out generally carry an umbrella as a protection from the sun. Madox

Return to Corfu - the fortifications.