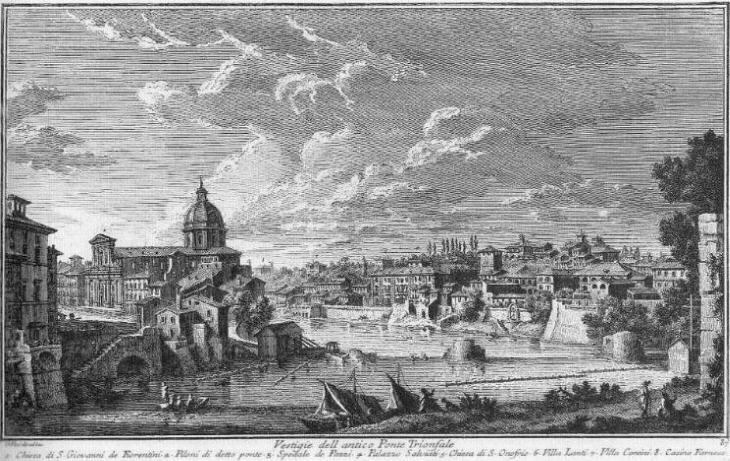 In the 1740s Giuseppe Vasi published Vedute di Roma sul Tevere, his first book of etchings which included fifteen landscape views of the river. In 1754 Vasi published the fifth book of the series Delle Magnificenze di Roma Antica e Moderna which covered the same subject. It was the only book that had landscape views, which in some instances were those he had published in his first book (e.g. Plate 87 - iii). The ruined pillars shown in the plate belonged to Pons Triumphalis, a bridge which was so called because it was crossed by Roman armies returning from a victorious campaign. More specifically it is now believed that the name was due to the 396 BC seizure of Veii by Marcus Furius Camillus; the road to that town started after the bridge.
The view is taken from the green dot in the small 1748 map here below. In the description below the plate Vasi made reference to: 1) S. Giovanni de' Fiorentini; 2) Pillars of Ponte Trionfale; 3) Spedale de' Pazzi; 4) Palazzo Salviati; 5) S. Onofrio; 6) Villa Lanti; 7) Villa Corsini (Casino Riario); 8) Casino Farnese. 3), 4), 5), 6), 7) and 8) are shown in detail in other pages. The small map shows also 9) Collegio Bandinelli/Palazzo del Consolato di Firenze; 10) Palazzo De Rossi. 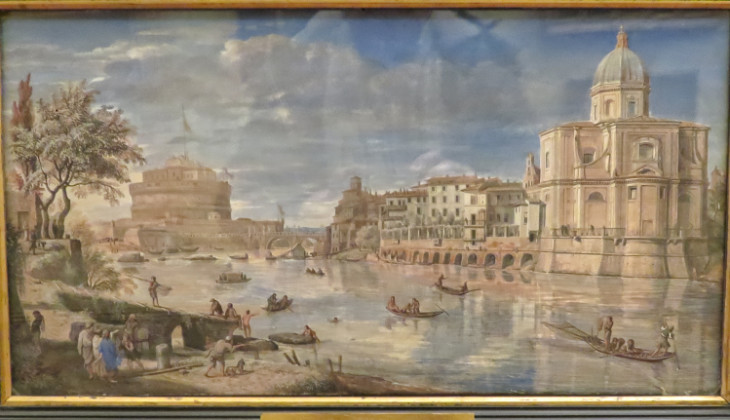 Galleria Palatina - Florence: Caspar Van Wittel : view of the same area but from the opposite side 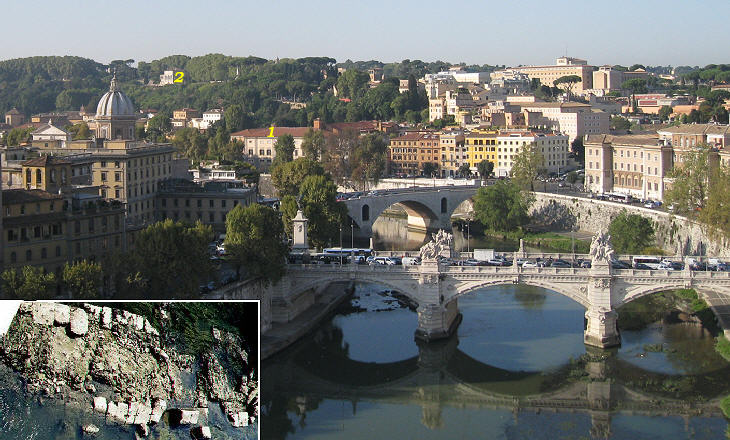 The view from Castel Sant'Angelo in September 2008; the bridge in the foreground is Ponte Vittorio Emanuele II, that behind it is Ponte Principe Amedeo di Savoia, Duca d'Aosta; 1) Palazzo Salviati; 2) Villa Lanti; (inset) ruins of the Roman bridge;

At the time of the Roman Empire eight bridges crossed the Tiber: only three of them have survived (Ponte Milvio, Ponte S. Angelo and Ponte Quattro Capi). Pons Triumphalis (aka as Pons Neronianus, because it was built by that emperor or by Caligula) perhaps because of its location at a sharp bend of the river, was one of the first ancient bridges to collapse as early as the end of the IVth century; in summer the ruins of one of its pillars can still be seen between the two modern bridges.
In the late 1880s the river bed was enlarged and high walls were built on its banks in order to prevent floods; Spedale de' Pazzi on the right bank and many buildings near S. Giovanni dei Fiorentini were demolished. In 1888 the opening of Corso Vittorio Emanuele, a new large street leading to the Vatican caused the pulling down of other buildings near S. Giovanni dei Fiorentini, including S. Orsola della Pietà, a small XVIth century church which was used as an oratory by St. Philip Neri in the early phase of his preaching.
The view from Castel Sant'Angelo allows seeing Villa Lanti and Palazzo Salviati, whereas S. Onofrio is hidden by trees, Villa Corsini (Casino Riario) was demolished to make room for the 1895 Monument to Giuseppe Garibaldi and Casino Farnese is too small and far away to be noticed. 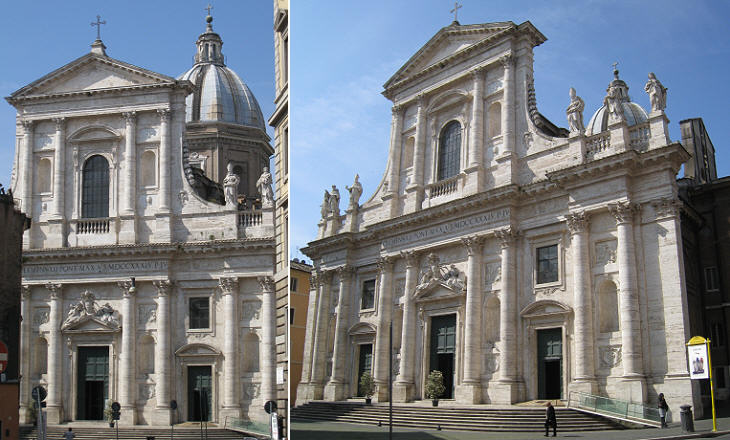 The area shown on the left side of the plate was the Little Florence of Rome (the image used as background for this page shows the heraldic lily which is the symbol of Florence). Here the Florentines opened branches of their banks (in Via dei Banchi Vecchi) or were involved in manufacturing and trading woollen cloth (the proximity to the river was necessary for some phases of the process); nearby they had their hospital, their church and their mill; the names of the streets are evidence of their presence: Via Acciaioli (a famous Florentine family), Via delle Palle (a reference to the six balls, heraldic symbols of the Medici), Via dei Cimatori (those who combed woven wool for imperfections).
The Florentines in Rome founded their brotherhood in 1448 and in 1488 they were given an existing church (S. Pantaleone) which owing to the opening of Via Giulia they were asked to partially demolish. Pope Leo X promoted the construction of a brand new church to be dedicated to St. John the Baptist, patron saint of Florence. Jacopo Sansovino was asked to design the church, whilst Antonio da Sangallo the Younger was responsible for the walls needed to support the apse of the new building which ended right on the edge of the river. The construction was halted by political events in Rome and Florence; in 1543 Pope Paul III opened a new street between Ponte S. Angelo and the church which was still far from being completed. 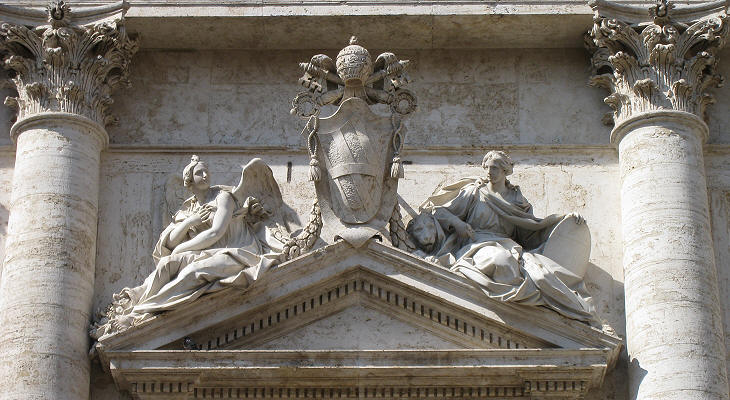 The church was eventually completed between 1582 and 1614 by Giacomo della Porta (1582-598) and Carlo Maderno (1598-1614) who designed the dome. The façade however was left unfinished and only in 1734 Pope Clement XII, the last pope from Florence and a man of great wealth, commissioned Alessandro Galilei to build it. Galilei had won in 1732 the contest for the new façade of S. Giovanni in Laterano. 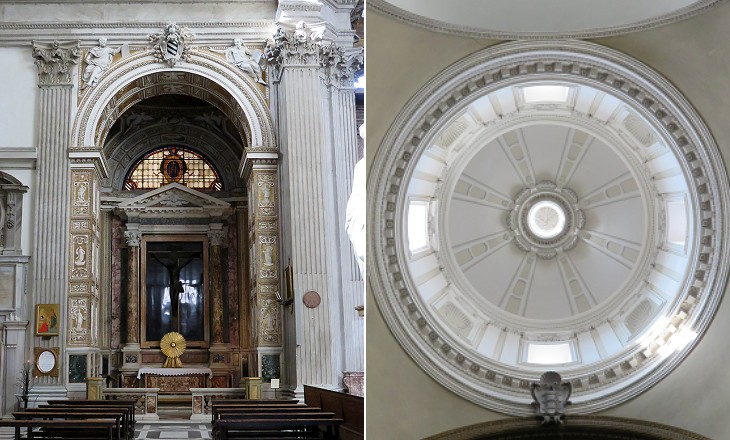 (left) Cappella Sacchetti (they had their palace in nearby Via Giulia) or del Crocifisso; (right) interior of the dome with a coat of arms of the Falconieri

During the XVIIth century the most important Florentine families in Rome took care of the decoration of the church. They employed some of the finest artists in Rome and they used marbles and gilded stuccoes, yet the interior does not resemble that of many other Roman churches of the same period, with perhaps the only exception of S. Maria in Campitelli. 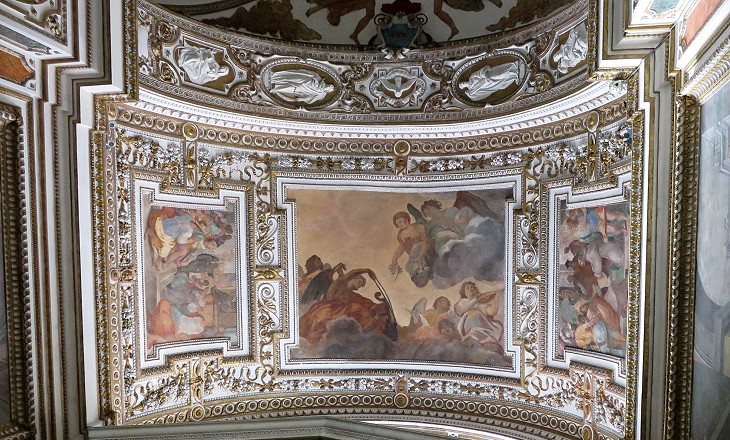 Cappella Scarlatti or di S. Francesco: ceiling with side paintings by Nicolò Circignani (1597) and Musician Angels by Giuseppe Ghezzi (1687)

Cappella Scarlatti was the first chapel to be decorated, even before the completion of the church. Its gilded stuccoes and small frescoes are typical of the prevailing artistic trends of the time. The painting by Giuseppe Ghezzi was added a century later and it has a feature of its time, i.e. the illusionistic depiction of the subjects, typical of many ceilings by Andrea Pozzo. 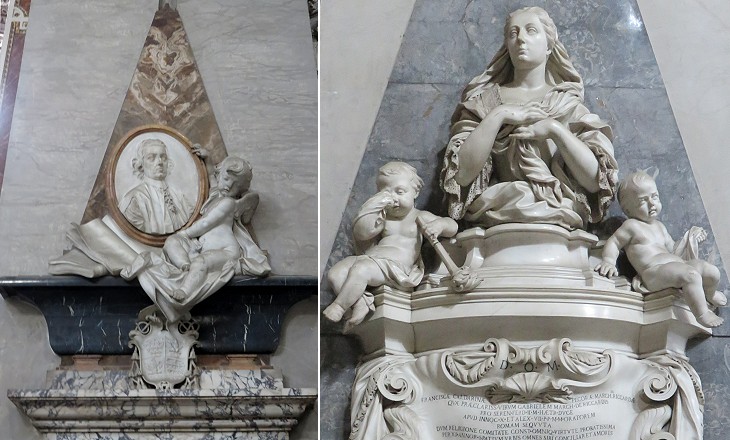 A number of works of art were commissioned to artists of Florentine origin who most likely were members of the brotherhood. Filippo Della Valle was a nephew of Giovanni Battista Foggini, a Florentine sculptor best known for his small bronze statues (some of which are at Palazzo Corsini - it opens in another window). He moved to Rome when Cardinal Corsini was elected Pope Clement XII and he became a leading sculptor. Lorenzo Merlini was active in Rome in 1700-708 before returning to Florence. His monument in S. Giovanni dei Fiorentini is regarded as his best work owing to the portrait of the deceased woman. It does not have the gruesome references to Death of many other funerary monuments in Rome.
You may wish to see the Monument to Alessandro Gregorio Capponi by Michel-Ange (It. Michelangelo) Slodtz, a French sculptor who spent seventeen years in Rome or a a directory of national churches in Rome. 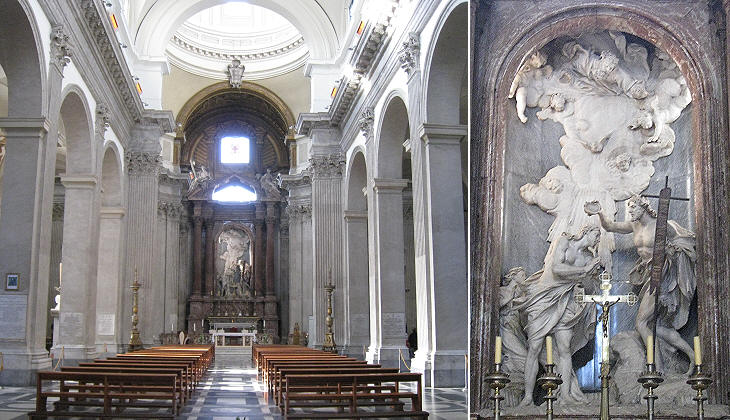 Lelio Falconieri came to Rome during the pontificate of Pope Paul V; he was assigned many positions including those of governor of San Severino and of Spoleto and of Nuncio (Ambassador) in the Flanders. Pope Urban VIII appointed him cardinal in 1643. In 1615 his brother Orazio married Ottavia Sacchetti. He managed to be assigned the main altar and the apse of S. Giovanni dei Fiorentini as family chapel. 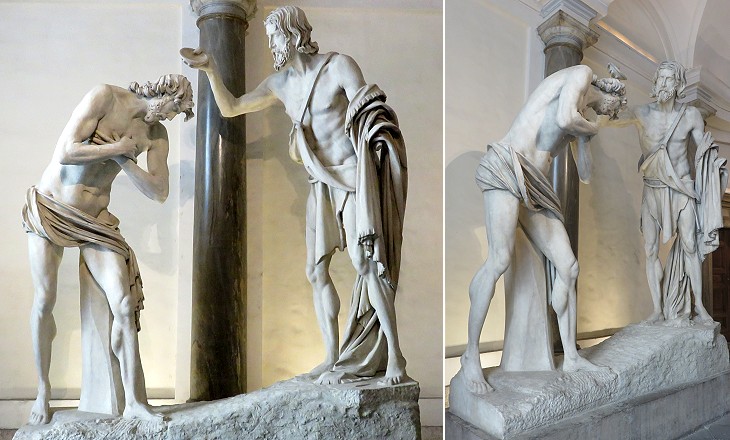 The decoration of the chapel was initially devised by Pietro da Cortona, but eventually Orazio Falconieri asked Francesco Borromini, who was in charge of the redesign of his family palace, to complete the work. The main altar was expected to house two statues depicting the Baptism of Jesus Christ. They were commissioned to Francesco Mochi, a sculptor of Tuscan origin who was elected Principe dell'Accademia di S. Luca, the guild of the Roman artists in 1633. His two statues greatly departed from the prevailing patterns of the time because of the height of the subjects and the academic treatment of their clothes. They were not completed by 1654 when the sculptor died and eventually they were placed at the northern entrance to Ponte Milvio. A similar fate occurred to two other statues by Mochi which were meant for S. Paolo fuori le Mura and ended at Porta del Popolo. 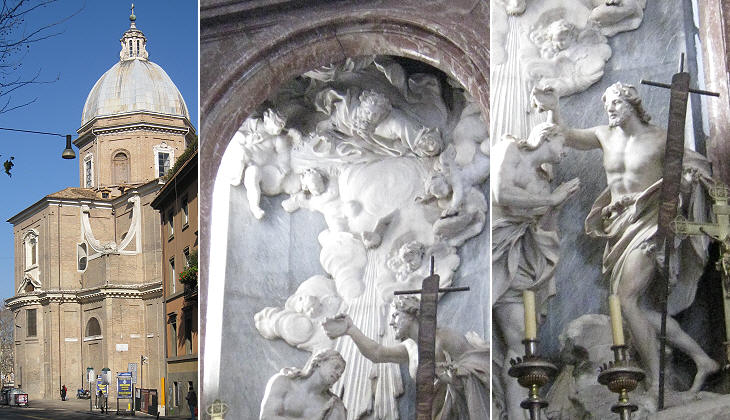 (left) Apse of the church with the small vertical window opened to direct light towards the statues of the main altar; (centre/right) light effects

The chapel was eventually completed by Ciro Ferri, a pupil of Pietro da Cortona. The much more "nice to see" statues were made by Antonio Raggi, a pupil of Gian Lorenzo Bernini. They receive light from a narrow hidden window which was opened in the apse, similar to what Bernini had done in other chapels, e.g. at Cappella Raimondi a S. Pietro in Montorio. You may wish to see the similar statues which were made by Giuseppe Mazzuoli for St. John's Co-Cathedral at Valletta. 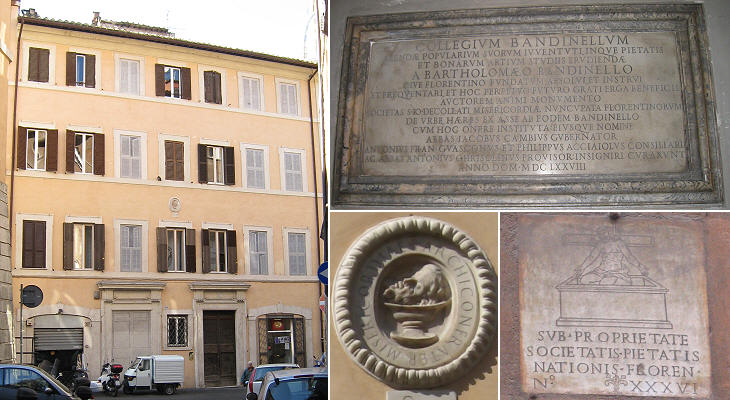 Via Giulia begins in the Florentine quarter of Rome. The first two buildings of the street were of great importance for the Florentine community. Collegio Bandinelli was an institution founded in 1617 by Bartolomeo Bandinelli, a rich baker, for the education of the poor. The palace was built many years later and the college was operative only in 1678; in the late XVIIIth century it had summer quarters at Marino. It was managed by Arciconfraternita della Misericordia, a charitable brotherhood. Its members met at S. Giovanni Decollato. Today the building is converted into flats, but it retains an inscription celebrating the foundation of the college. 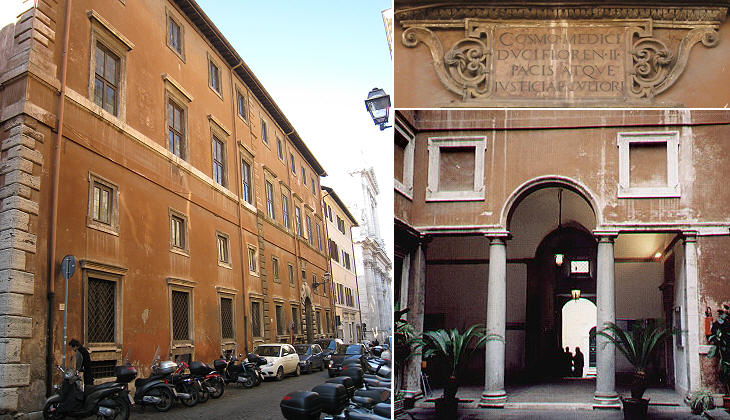 The building adjoining Collegio Bandinelli was built by Antonio da Sangallo the Younger for his family; it was not his only property because his name is mentioned also in an inscription in nearby Palazzo Sacchetti. After the death of Sangallo in 1546 the building was sold to Migliore Cresci; he was married to Cornelia Strozzi, whose relatives opposed the Medici. Migliore Cresci however preferred to support Cosimo I, the first Grand Duke of Tuscany, by placing a flattering inscription above the entrance which says: To Cosmo Medici, second duke of Florence, lover of peace and justice. The façade was painted with (lost) portraits of members of the Medici family. Eventually it housed the Consulate of the Grand Duchy of Tuscany which gave legal assistance to the Florentines living in Rome. The Embassy of the Grand Duchy was situated at Palazzo Madama. The palace retains the ochre colour which was typical of many Roman buildings until the 1990s. You may wish to see a page on the new colours of Rome. 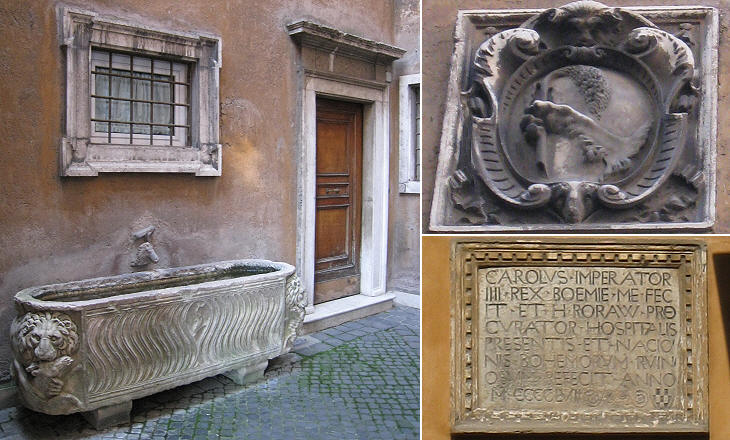 (left) Palazzo Sangalletti with a typical "strigilato" sarcophagus; (right-above) coat of arms of Mons. Guglielmo Sangalletti, personal assistant to Pope Pius V. In 1593 he was charged with embezzlement; he fled to Florence and his properties were confiscated; (right-below) inscription mentioning Charles IV, King of Bohemia (1346-378) and Holy Roman Emperor (1355-378)

The Florentine quarter retains several interesting Renaissance houses; the wide spaces between the windows were decorated with graffito paintings.
At the border of the Florentine quarter in Via dei Banchi Vecchi there was a very ancient hospice for pilgrims from Bohemia: in 1457 it was renovated by Heinrich Roraw, leader of the Bohemian community; an inscription celebrates Charles IV, King of Bohemia and Holy Roman Emperor, who in 1368 came to Rome for the coronation of Elizabeth of Pomerania, his fourth wife. 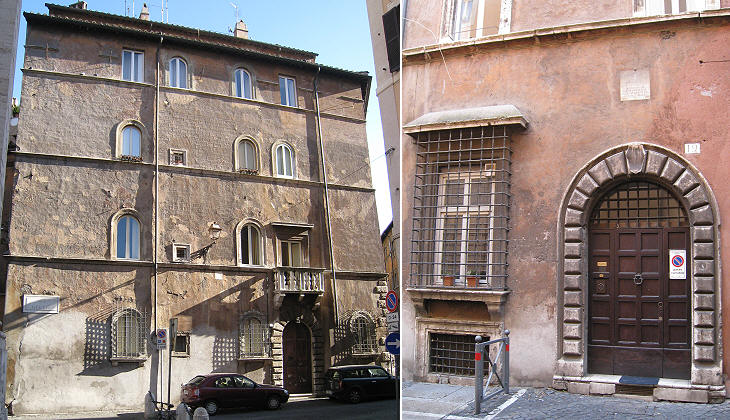 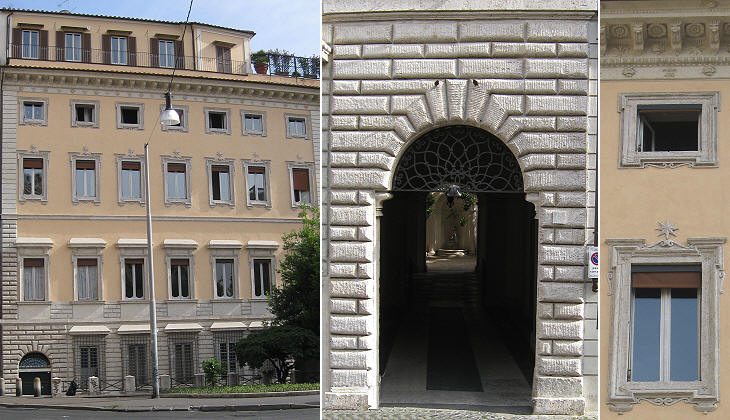 (left) Façade; (centre) one of the two entrances; (right) details of the decoration

Palazzo De Rossi was built in the XVIIth century and it was spared by the opening of Corso Vittorio Emanuele. However its ground floor with a very Florentine bugnato design is today at a level lower than that of the new street. 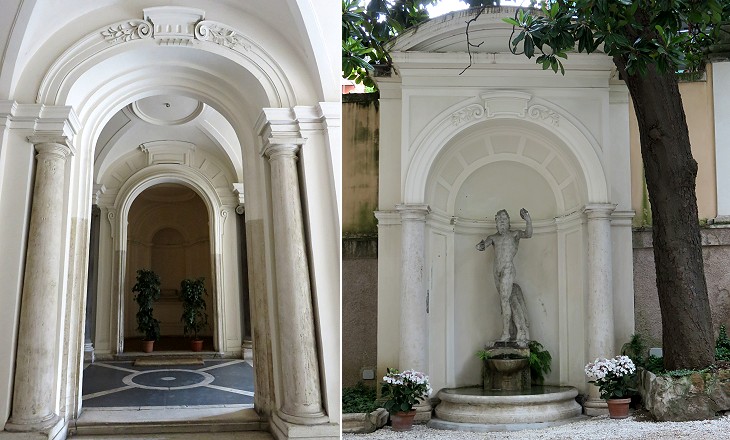 (left) Detail of the interior; (right) fountain in the courtyard with the statue of Silenus, the tutor and companion of Dionysus, a copy of that in Sala del Sileno at Villa Borghese

Next plate in Book 5: Passo della Barchetta all'Armata.
You have completed Day 7 itinerary! Move to Day 8: Passeggio di Ponte S. Angelo.
Next step in your tour of Rione Ponte: Palazzo Sacchetti a Via Giulia.