Rione Ponte was named after Ponte S. Angelo. It borders to the east on Campo Marzio, Sant'Eustachio, Parione and Regola while on the other sides it is surrounded by the river. 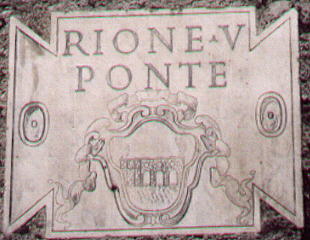 Coat of arms of Rione Ponte

The coat of arms of Rione Ponte shows a bridge with a statue at each end, a reference to the statues of St. Peter and St Paul at the beginning of Ponte S. Angelo. The bridge however is not part of Rione Ponte, but of Rione Borgo to which it was assigned in 1586 by Pope Sixtus V, when he created that rione.
Apart from a few small reliefs on the walls and in the courtyards of some buildings and from the ruins of Ponte Trionfale, Rione Ponte has no other signs of Ancient Rome. During the Renaissance the northern part of the Rione gravitated towards Via dei Coronari and the various businesses related to the flux of pilgrims, while the southern part was known for the many banchi (banks) opened by members of rich Florentine families. Rione Ponte flourished during the Renaissance and it has retained many houses of that period, including some with the painted decoration which made the area a sort of open air gallery.

Rione Ponte has a lot to offer to those who walk in its narrow streets, among the least known of historical Rome. 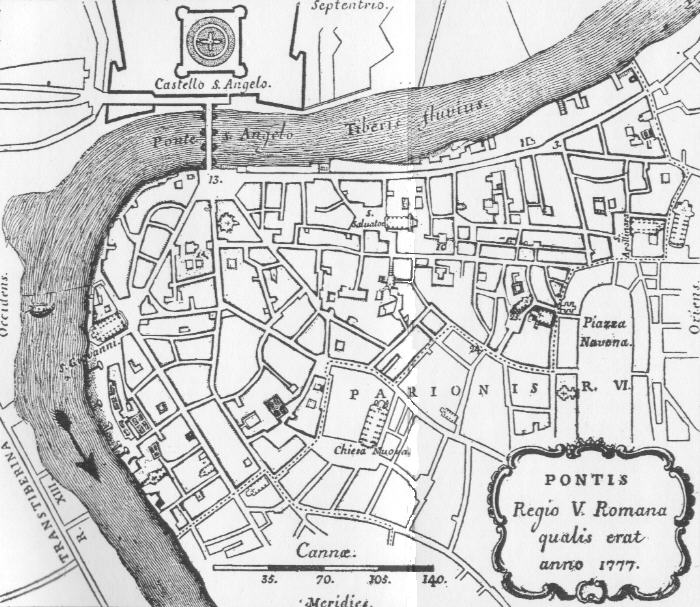 The red X mark the main changes which occurred after 1777:
a) line linking several X along the river: in the 1880s huge walls were erected along the Tiber: this effort included a redesign of the river front which required the pulling down of many buildings;
b) line linking three X in the top right quarter: a new bridge (Ponte Umberto) completed in 1896 led in the following years to the opening of a modern road (Via Zanardelli) which isolated the most eastern section of Ponte from the rest of the rione;
c) diagonal line linking four X and starting at the top left corner: in the 1880s a large road (Corso Vittorio Emanuele) and a new bridge ensured better communication between the Vatican and the centre of Rome: this heavily impacted on the continuity of Rione Ponte;
d) horizontal line linking two X: a new bridge (Ponte Principe Amedeo) in the late 1930s and the road linking it with Corso Vittorio Emanuele led to the pulling down of some buildings belonging to the Florentine community living next to S. Giovanni dei Fiorentini.
The different colours group the monuments which are shown in the same page.

The image used as background for the table shows the symbol of Florence in S. Giovani dei Fiorentini.
You can start your tour of Rione Ponte from Albergo dell'Orso.