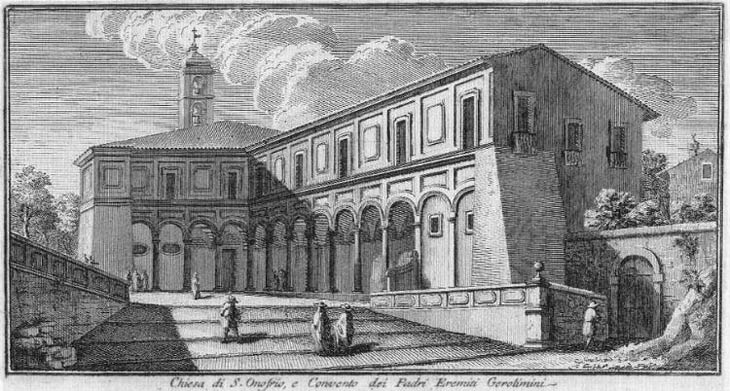 A site on the Janiculum hill with a commanding view over the City of Rome does not seem the most appropriate location for a hermitage where to live in seclusion from the world; it must be said however that when in 1419 Blessed Nicolò da Forca Palena chose it for founding a small friary, the access to this part of the hill was not as easy as it became in 1588, when Pope Sixtus V opened a street which from Porta S. Spirito reached the friary. In 1756 when Giuseppe Vasi published this etching the site was no longer outside the walls of Rome, because in 1644 Pope Urban VIII built new walls along the top of the hill.
The view is taken from the green dot in the small 1748 map here below which shows: 1) S. Onofrio; 2) Cappella della Madonna del Rosario; 3) Palazzo Salviati; 4) Conservatorio del Padre Bussi; 5) Teatro di Pii Trattenimenti. 3) is covered in another page. 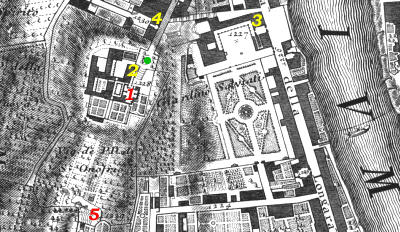 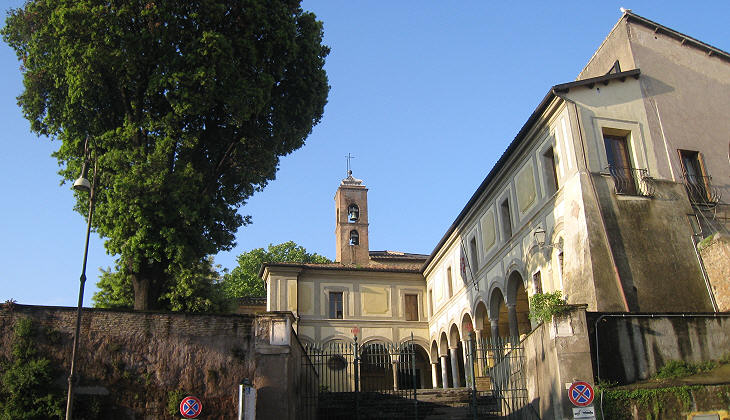 Passeggiata del Gianicolo, an avenue which was opened in 1884, cuts the old street leading to S. Onofrio and because of this the access to the friary has been slightly modified; it is the only noticeable change which has occurred since Vasi's time. 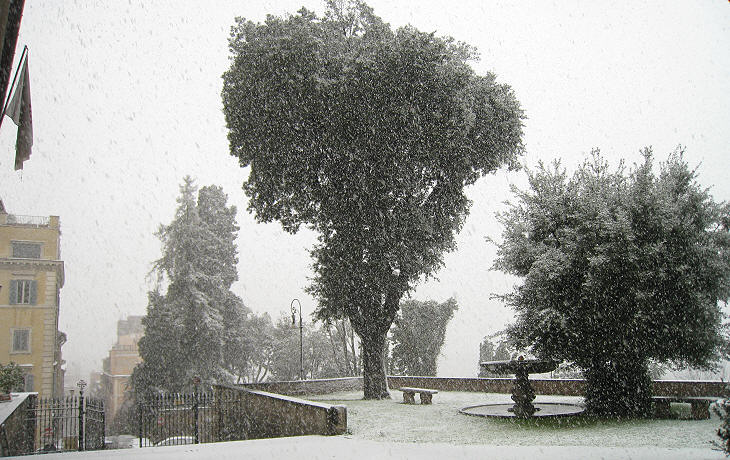 Snow is a very rare event in Rome; because S. Onofrio is on a hill there is a slightly higher chance that the snow settles. You may wish to see more images of snowfalls in Rome. 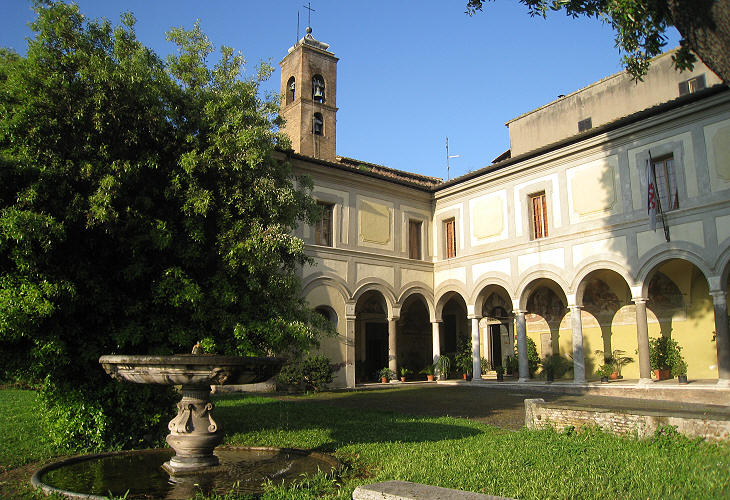 Terrace of S. Onofrio; the fountain is a copy of that at Piazza Giudia

Yesterday I went to Sant'Onofrio, between two ballots, while waiting for a Pope: there are two orange trees in the cloister, the green oak is elsewhere. (..) What delightful solitude! What a wonderful view! What happiness to rest there between frescoes by Domenichino and those of Leonardo da Vinci! I would like to stay there: I have never been more tempted.
François-René de Chateaubriand - Memoirs - March 21, 1829 - Translation by A. S. Kline
The church and the friary were completed during the XVIth century and at the beginning of the following one. Both the interior and the portico were decorated with many frescoes. A painting in the friary (it opens in another window) was attributed to Leonardo da Vinci until the end of the XIXth century, but today art historians assign it to Giovanni Antonio Boltraffio, a painter from Milan who was influenced by Leonardo's works. 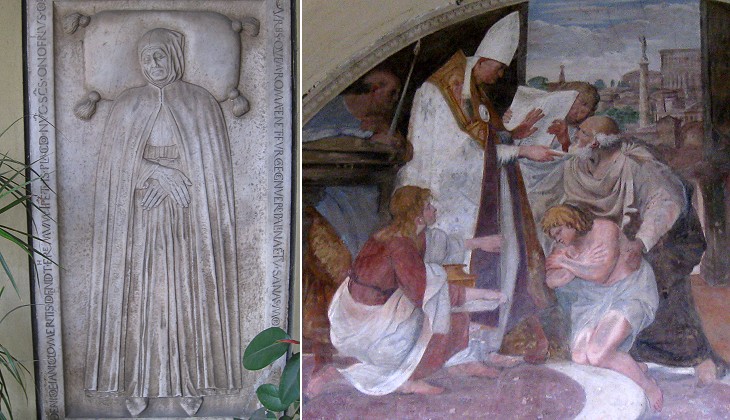 (left) Gravestone of Blessed Nicolò da Forca Palena (1349-1449) - school of Donatello; (right) Baptism of St. Jerome by Domenichino (in the background a reconstruction of Ancient Rome)

A major redesign of the interior of the church occurred during the XIXth century; the gravestone of Blessed Nicolò da Forca Palena was removed and walled in the portico; we know from a 1588 Guide to Rome that many people went to pray at his gravestone, because in his lifetime he had a reputation for curing diseases, certainly his own ones, since he died at age one hundred. He was the co-founder of the Italian branch of the Order of the Poor Hermits of St. Jerome. The friary was dedicated to St. Onuphrius of Egypt, a IVth century hermit. 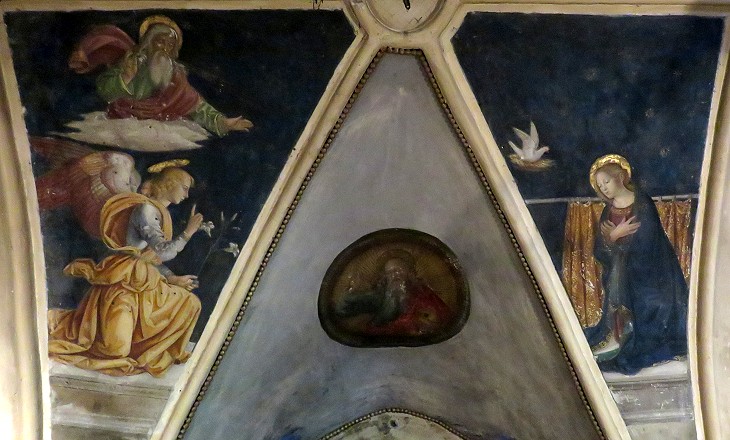 Giorgio Vasari shortly mentioned Antoniazzo Romano in The Lives by saying that he was one of the finest Roman painters in the late XVth century. It was only in 1871 that Joseph Archer Crowe and Giovanni Battista Cavalcaselle in A History of Painting in Italy were able to identify some of his works, although they attributed them to two different painters having the same name. During the XXth century many other works were attributed to Antoniazzo Romano and eventually in 2013 an exhibition at Galleria Nazionale d'Arte Antica a Palazzo Barberini provided an overall outline of his painting. You may wish to see his last known work, another Annunciation, at S. Maria sopra Minerva. 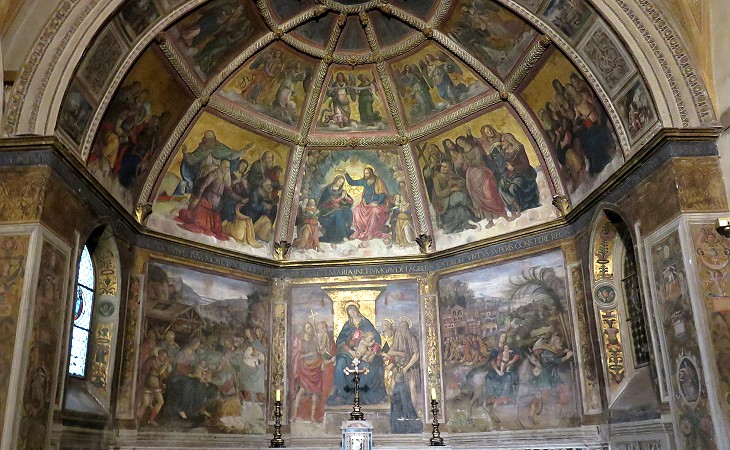 Apse by Baldassarre Peruzzi and others

The decoration of the apse is the most interesting feature of the interior. It is a Renaissance attempt to develop a new way of decorating apses of churches which does not entirely depart from the use of golden mosaics, which in Rome was frequent until the early XIVth century. Its design is believed to be an early work by Baldassarre Peruzzi, who eventually masterminded the design and decoration of La Farnesina. 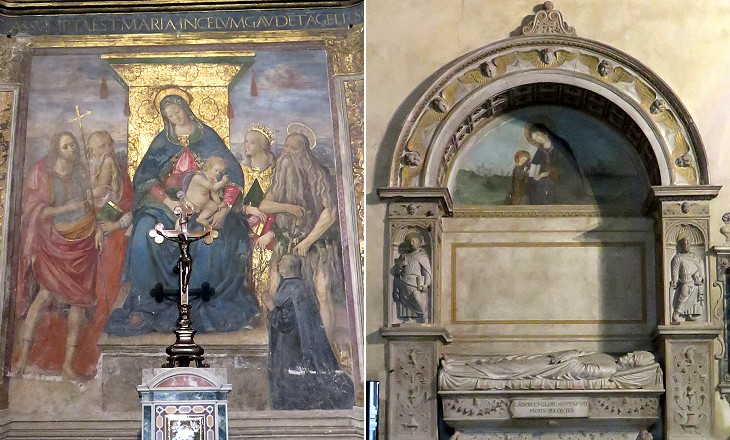 (left) Detail of the apse: The Virgin Mary and Infant Jesus with St. John the Baptist, another saint, St. Catherine of the Wheel and St. Onuphrius; (right) Monument to Giovanni Sacco, Archbishop of Ragusa in Dalmatia and Bishop of Ancona (d. 1505), school of Andrea Bregno

Giovanni Sacco had to deal with matters which today we do not associate with the duties of a bishop. He is chiefly remembered for having repressed the riots which occurred in Rome after the death of Pope Alexander VI in 1503 with a heavy hand and for having helped Pope Julius II during his military campaigns. Many visitors notice the inscription he dictated for his monument: Labor et Gloria Vita Fuit. Mors Requies. Life was Action and Glory. Death is Repose. 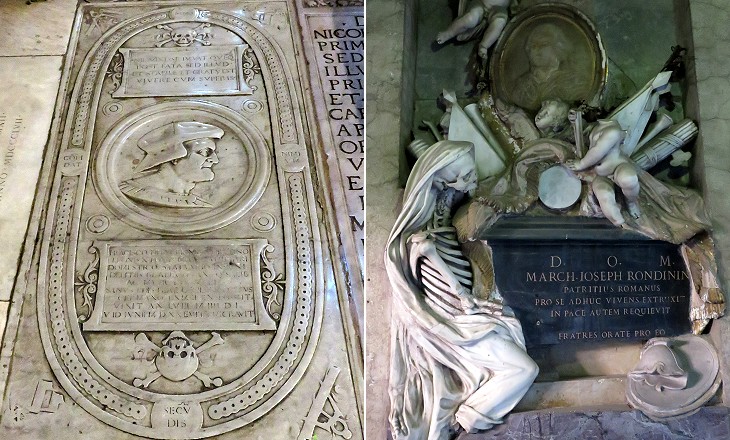 (left) Gravestone of Francesco Buglioni (d. 1520), a Florentine sculptor in friendly terms with Pope Leo X; (right) Monument to Giuseppe Rondinini. He died in 1801, but the monument was already described in 1794 by Mariano Vasi and the inscription "pro se adhuc vivens extruxit" confirms that Rondinini did want to be buried in such a gruesome monument. He showed more taste in the decoration of his family palace 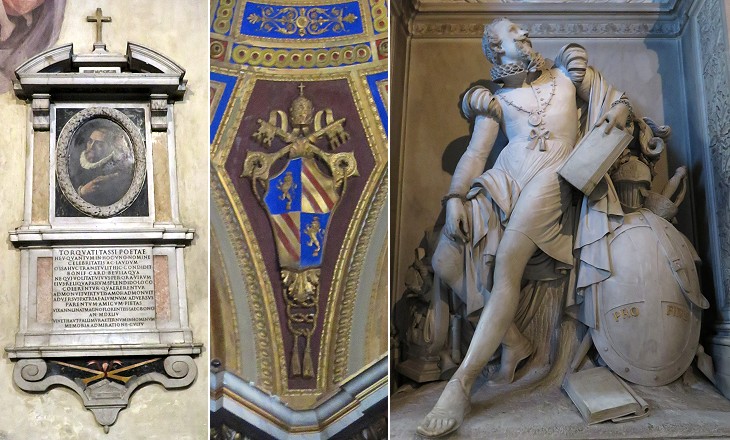 I saw the Tomb and Picture over it of rare Torquato Tasso; whose warlike Muse is able to inspire mettle into his readers Breast, and dispose him to the engagement, of a new Croisade against the Turks. This I can say of him, if Virgil hinder'd him from being the first of Poets, he hinder'd Virgil from being the only Poet.
Richard Lassels' The Voyage of Italy, or a Compleat Journey through Italy in ca 1668

The sacred armies, and the godly knight,
That the great sepulchre of Christ did free,
I sing; much wrought his valor and foresight,
And in that glorious war much suffered he;
In vain 'gainst him did Hell oppose her might,
In vain the Turks and Morians armed be:
His soldiers wild, to brawls and mutinies prest,
Reduced he to peace, so Heaven him blest.
(opening lines of La Gerusalemme Liberata / Jerusalem Delivered
1600 translation by Edward Fairfax)

Today Tasso and his poem are almost forgotten, but until the end of the XIXth century they were very popular: the hero of the poem is Godfrey of Bouillon, the leader of the First Crusade.
Tasso died in 1595 at S. Onofrio when he was about to be crowned with a laurel wreath in Campidoglio.
On the 2nd of February 1787 we attended the ceremony of blessing the tapers (Candlemas) in the Sistine chapel. I was in anything out a good humour, and shortly went off again with my friends (..). We sought the free air, and after a long walk came upon S. Onofrio's, in a corner of which Tasso is buried. In the library of the monastery there is a bust of him, the face is of wax, and I please myself with fancying that it was taken after death: although the lines have lost some of their sharpness, and it is in some parts injured, still on the whole it serves better than any other I have yet seen to convey an idea of a talented, sensitive, and refined but reserved character.
J. W. Goethe - Italian Journey - Translation by Charles Nisbeth
On the left of the entrance is the original monument of Tasso (with a portrait), erected after his death by Cardinal Bevilacqua. Greatly inferior in interest is a monument recently placed to his memory in the adjoining chapel.
Augustus J. C. Hare - Walks in Rome - 1875 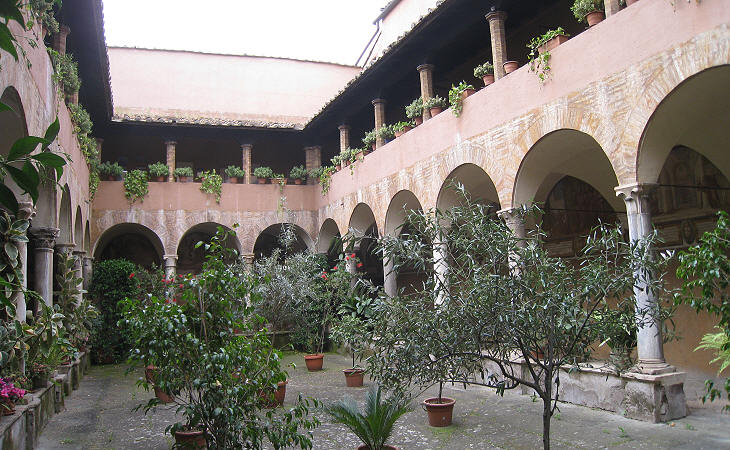 A simple and small cloister was built in the XVth century, but for the Jubilee Year 1600 it was decorated with a long series of frescoes showing episodes from the life of St. Onuphrius of Egypt; each episode is accompanied by a heading in Latin and Italian. The account of the life of St. Onophrius is almost identical to that of St. Paul the First Hermit, who also lived in the Egyptian desert (you may wish to see the decoration of S. Paolo Primo Eremita).

Episodes of the life of St. Onuphrius by Giuseppe Cesari, Sebastiano Strada and Claudio Ridolfi; a detail of one of them can be seen in the image used as background for this page

St. Onuphrius was a monk of Thebes, who retired to the desert, far from the sight of men, and dwelt there in a cave for sixty years, and during all that time never beheld one human being, or uttered one word of his mother-tongue except in prayer. He was unclothed, except by some leaves twisted round his body, and his beard and hair had become like the face of a wild beast. In this state he was discovered by a holy man whose name was Paphnutius, who, seeing him crawling on the ground, knew not at first what live thing it might be. Hare
In 1933 the Order of St. Jerome was dissolved. 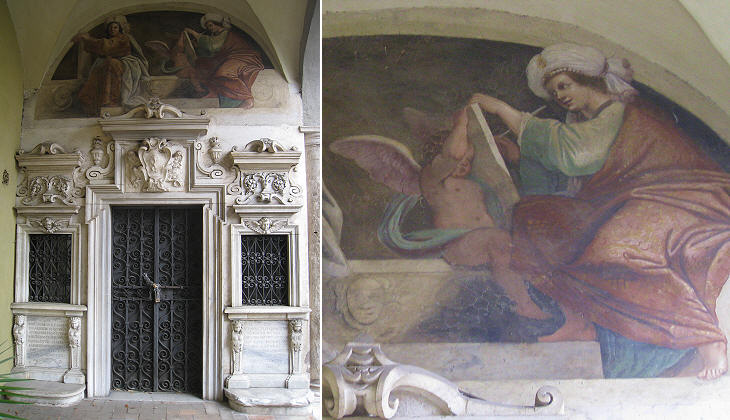 (left) Entrance to the chapel; (right) detail of a Sybil by Agostino Tassi (you may wish to see the same subject in paintings by Raphael)

The last two arches of the friary portico were closed in 1620 to obtain a chapel for the Vaini family, who lived in a casino on the Janiculum, which today is known as Casino Giraud. The dedication to Madonna del Rosario (Our Lady of the Rosary) follows the institution of an annual feast by the same name to celebrate the 1571 victory of Lepanto. The entrance has an elaborate marble decoration. 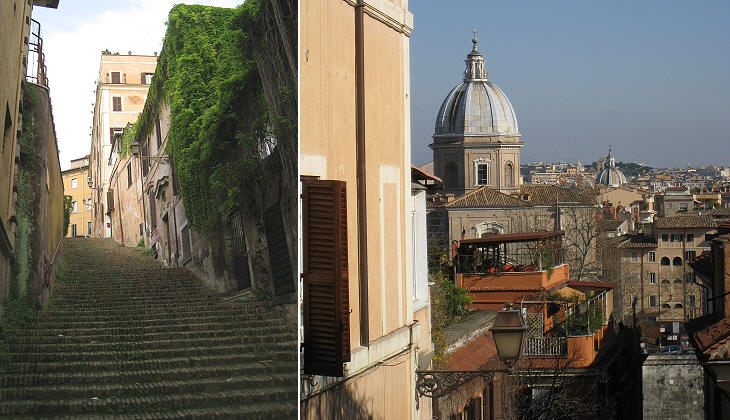 (left) Steps leading to Via di S. Onofrio; (right) view of S. Giovanni dei Fiorentini from the top of the steps

Steps near Palazzo Salviati reach the street leading to S. Onofrio; in a few moments you can leave one of the noisiest sections of the lungotevere and find yourself in a Silent Street of Rome. 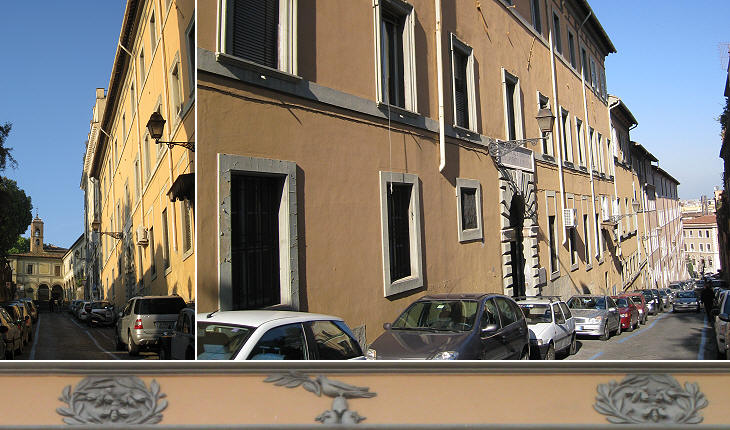 (above) Views of Palazzo Giori uphill (left) and downhill (right); (below) detail of the decoration

Angelo Giori was appointed cardinal in 1643 by Pope Urban VIII for whom he had worked in various capacities for 37 years. Of a very modest family of Camerino, he was allowed to use in his coat of arms the bees of the Barberini, the Pope's family.
At Vasi's time the building housed Conservatorio del Rifugio, a charity founded by Father Alessandro Bussi, which was aimed at helping women che si convertivano dalla loro mala vita passata (who abandoned their former sinful life).
It was instituted for the reception of repentant females, of whom it now contains 50, half of whom pay a small pension; the other half are received gratuitously; and all are taught reading, writing, needle work, embroidery, etc..
Rev. Jeremiah Donovan - Rome Ancient and Modern - 1843 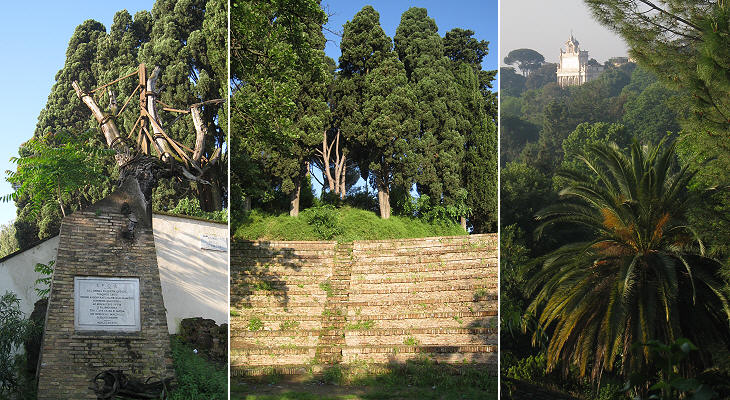 Torquato Tasso used to rest under an oak near S. Onofrio. The small summer theatre near that tree is now named after it (Teatro Alla Quercia del Tasso). The oak was struck by lightning in 1843 and today a wall supports its trunk. The reference by Vasi to pious entertainments is due to the fact that St. Philip Neri taught his pupils at this location.
On the entrance of Spring, St. Philip Neri led his followers to Sant'Onofrio which, standing high and broad, offered the pleasantest situation at such a season. Here (..) a young boy stepped forth and recited a sermon he had learnt by heart. Prayers followed, and now, by way of conclusion, a choir of singers invited for the purpose sent forth their joyous and impressive strains, an entertainment which was all the more charming that in that age music was little diffused and little cultivated, and that here, perhaps, for the first time religious singing was heard in the open air.
J. W. Goethe - "Filippo Neri, the Humorous Saint" in "Italian Journey"