(Memorial to Cardinal Ludovisi by Pierre Legros in S. Ignazio)

This page deals with baroque funerary monuments where the dead are shown in an oval medallion, without a representation of Death holding the medallion: these monuments are dealt with in a separate page: Memento Mori. It was not an entirely novel approach to celebrating the dead because in many ancient sarcophagi the dead were portrayed inside a clipeus, a round shield. 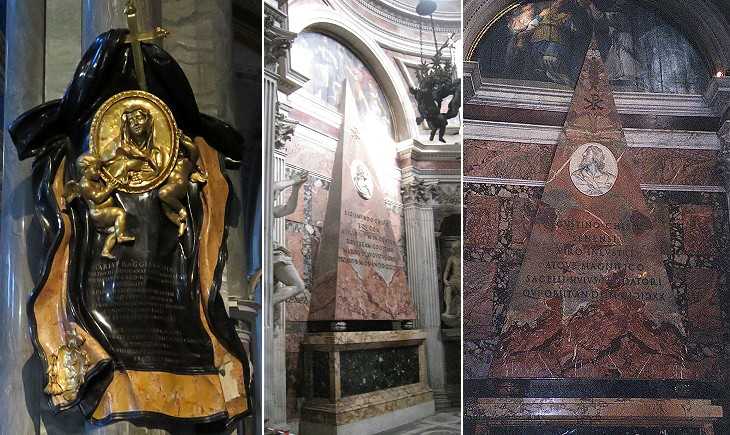 Bernini designed two patterns of monuments where the dead are portrayed in a medallion.
The Tomb of a Lady of the Family of the Raggi is very neat for the new manner of spreading (as I may say, and as you would think) of black Marble upon another colored Marble; and both of them upon a round Pillar.
Richard Lassels' The Voyage of Italy, or a Compleat Journey through Italy in ca 1668
The Monument to Maria Raggi on a pillar of S. Maria sopra Minerva introduced the concept of pictorial sculpture which Bernini developed in many other subsequent works (have a close look at the inscription). The use of color and of drapes swelled by a sort of internal wind will appear again in the Monument to Alexander VII and in the statue of Constantine at Scala Regia.
In the Monument to Agostino Chigi Bernini followed indications left by Raphael, who had designed the Cappella Chigi at the beginning of the XVIth century. The use of a coloured marble for the pyramid, in contrast with the white medallion is however typical of Bernini (see a page on the use of coloured marbles and other materials in the decoration of the churches of Rome).
Most of the funerary monuments of the second half of the XVIIth century followed two other patterns: either they represented the dead in the act of praying or they showed a representation of Death.
During the XVIIIth century the level of religious fervour wore out and several funerary monuments followed (and in some case combined) the two patterns shown above which suited the objective of celebrating the dead. 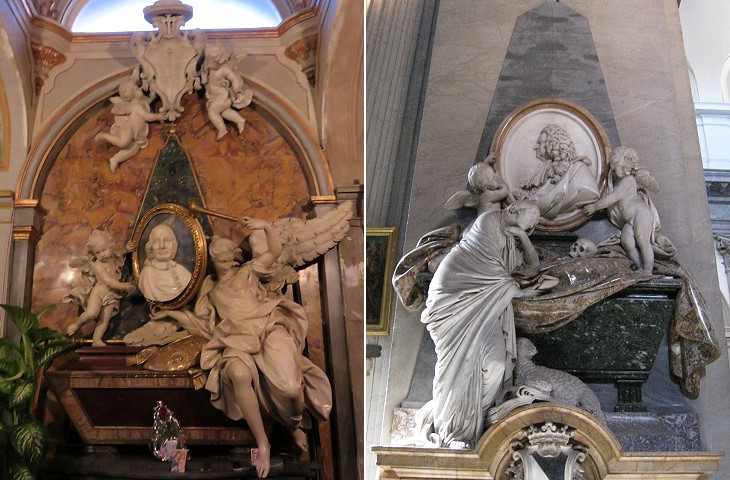 A monument to a cardinal belonging to a Genoese important family in the little church of S. Salvatore alle Coppelle shows this desire of celebrating the dead without making reference to Death. Michel Rénè Slodtz, known in Rome as Michelangelo Slodtz, was one of the many French artists who worked in Rome during the XVIIth and XVIIIth centuries. His monument to Alessandro Capponi in S. Giovanni dei Fiorentini is influenced by both of Bernini's monuments. It was designed by Ferdinando Fuga, a Florentine architect who worked in Rome, chiefly for the Florentine Pope Clement XII; it was not uncommon for sculptors to be asked to work on a monument designed by an architect. 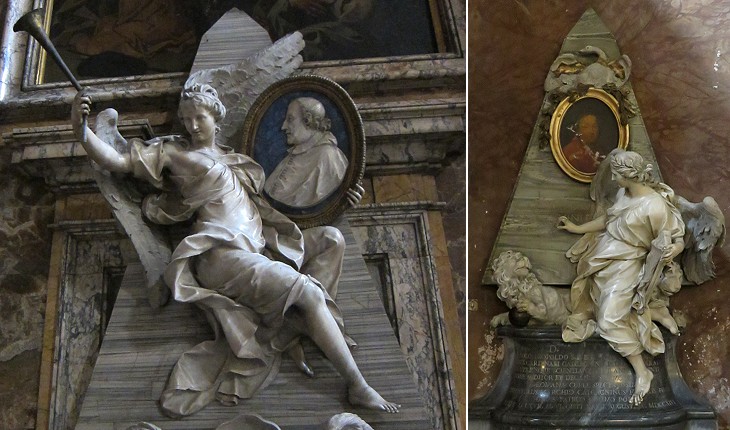 Pietro Bracci is known for his statue of Oceanus at the centre of Fontana di Trevi, but he has left an impressive number of other works, sometimes designed by him, sometimes executed for a monument, like Fontana di Trevi, designed by somebody else. His monument to Cardinal Calcagnini in S. Andrea delle Fratte with a statue of an angel writing on the pyramid is similar to a monument by Bernardino Cametti in Palestrina, which you can see in the image used as background for this page. 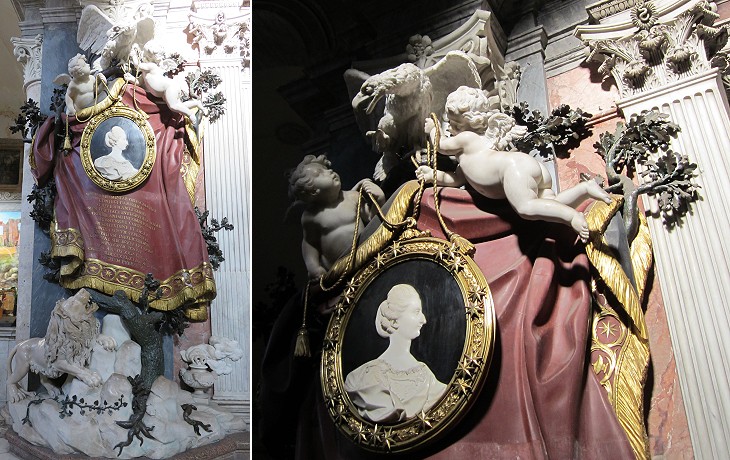 Paolo Posi, an architect who worked in the second half of the XVIIIth century, can be considered the last baroque artist. His monument to Flaminia Odescalchi Chigi, immediately outside the Chigi chapel is a lavish reinterpretation of Bernini's monument to Maria Raggi. You can see a page devoted to this last baroque tomb. 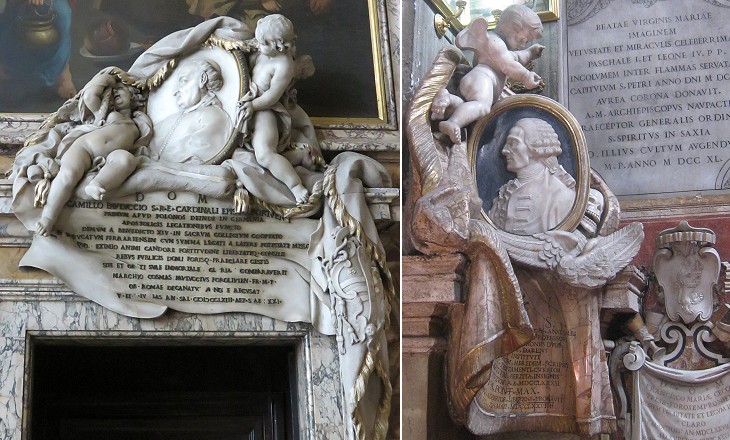 Although in the last part of the XVIIIth century, as a result of the Neoclassicist movement, the name Bernini became synonymous with bad taste, still some monuments continued to be designed following his examples. Tommaso Righi and Raffaele Secini are hardly mentioned in any history of art book, most likely because they continued to use baroque images in an environment fully converted to Neoclassicism, as their monuments clearly show.