Links to this page can be found in Book 5, Map C2, View D4, Rione Trastevere and Rione Ponte. 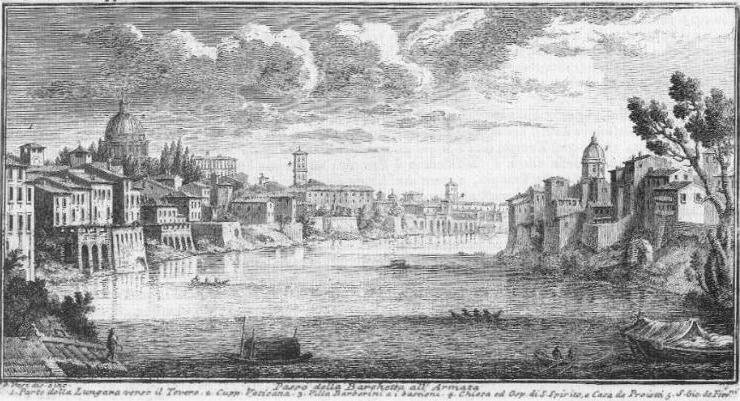 In the 1740s Giuseppe Vasi published Vedute di Roma sul Tevere, his first book of etchings which included fifteen views of the river; while in general Vasi showed a lot of attention to the details of the monuments of Rome, his early engravings are more similar to landscape paintings. It is likely that Vasi was influenced by Prospectus Magni Canalis Venetiarum, a book of fourteen etchings by Antonio Visentini after view paintings of the Grand Canal of Venice by Canaletto; the book was part of the print collection of Cardinal Neri Corsini (nephew of Pope Clement XII) to whom Vasi dedicated Book 9. In the plate shown above which was published in 1754 the domes of S. Pietro and S. Giovanni dei Fiorentini are part of the background, while the attention of Vasi focused on the ferries crossing the river, although these small boats (It. barchette) could not be compared to those shown in a 1742 plate by Visentini (it opens in another window).
The view is taken from the green dot in the small 1748 map here below. In the description below the plate Vasi made reference to: 1) Via della Lungara; 2) Dome of S. Pietro; 3) Villa Barberini; 4) Chiesa ed Ospedale di S. Spirito; 5) S. Giovanni dei Fiorentini. 1), 2), 3) and 4) are shown in more detail in other pages. 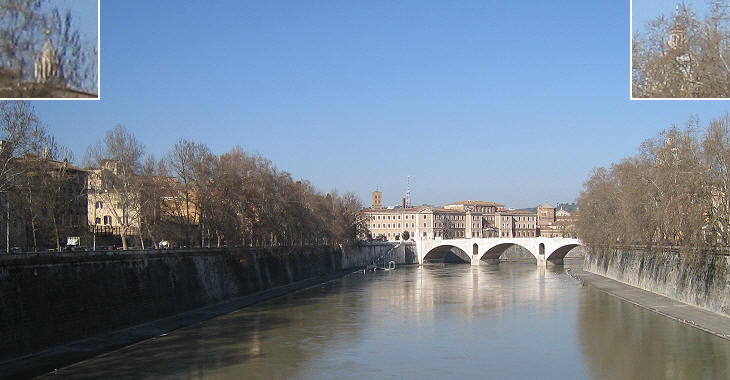 The view in January 2010 (from Ponte Mazzini); in the insets the domes of S. Pietro (left) and S. Giovanni dei Fiorentini (right); at the centre of the image the buildings added to Ospedale di S. Spirito in the 1930s and Ponte Principe Amedeo di Savoia, Duca d'Aosta

The high walls which were built along the river in the 1880s to prevent floods and new bridges caused the ferries to disappear. Today the only opportunity for seeing some boats on the river is to watch Madonna Fiumarola, a procession which takes place in July. 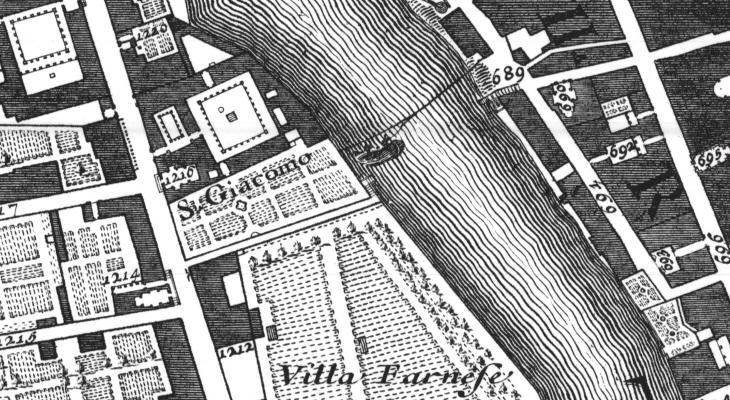 The very accurate map by Giovanni Battista Nolli shows the exact location of Passo della Barchetta all'Armata; Via dell'Armata (the street of the armed guards who controlled the access to Carceri Nuove, the prison of Rome) is No. 691 and No. 689 is the point on the left bank where passengers boarded the ferry (No. 690 is S. Eligio degli Orefici). The boarding point on the right bank was located between Giardino Farnese and S. Giacomo alla Lungara, it is clearly visible in plate 89.
Between Ponte S. Angelo and Ponte Sisto there were three other ferries, in addition to Passo della Barchetta all'Armata: one between Mola dei Fiorentini, a mill near S. Giovanni de Fiorentini and Porta S. Spirito; a second one between S. Anna de' Bresciani and S. Giuseppe and the third one (a private one) between Palazzo Farnese and Giardino Farnese. 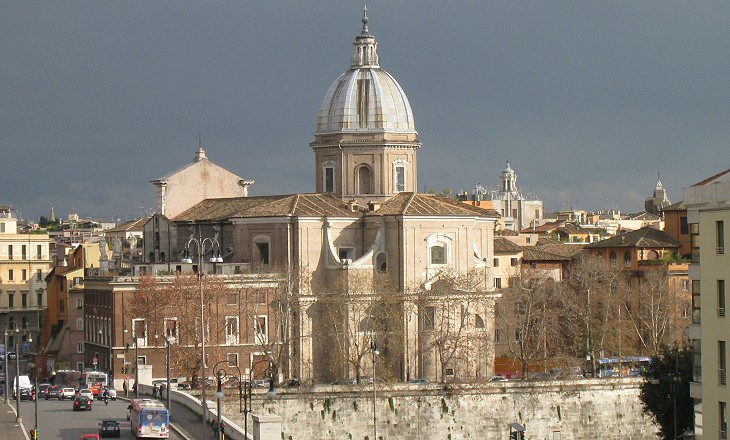 The façade of S. Giovanni dei Fiorentini is shown by Vasi in plate 87 and that page has other views of the church; the dome, because of its location on the edge of the river and of its high drum, is one of the best known landmarks of Rome. It was designed by Carlo Maderno in the early XVIIth century. 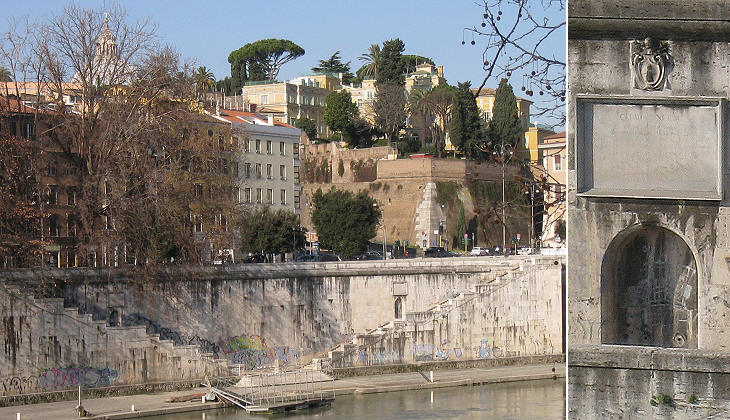 (left) Steps leading to the fountains and in the background Villa Barberini; (right) fountain with inscription and coat of arms celebrating Pope Clement XI

It is remarkable that on the side towards Lungara was found in the time of Clem. XI a spring of salubrious water derived from the neighbouring hill Janiculum. Hence a fountain was erected called Aqua Lancisiana from Lancisi, physician to the Pope who discovered it and this fountain is frequented for its lightness and salubrity.
J. Salmon - An Historical Description of Ancient and Modern Rome - 1800
Giovanni Maria Lancisi (1654-1720) was a physician who is still known for his studies of anatomy. He worked at Ospedale di S. Spirito where he founded a medical library. He used to recommend the water of a spring close to the hospital (thus called Acqua Lancisiana). The fountain built by Pope Clement XI at his suggestion was relocated in 1830 near the Tiber by Pope Pius VIII; after the construction of the walls along the river the original inscriptions and coats of arms of the popes were placed above two small modern fountains. Today they are dry because in the 1950s it was found that their water was no longer drinkable.