Links to this page can be found in Book 9, Map B2, Day 1, View C7, Rione Pigna and Rione Colonna. 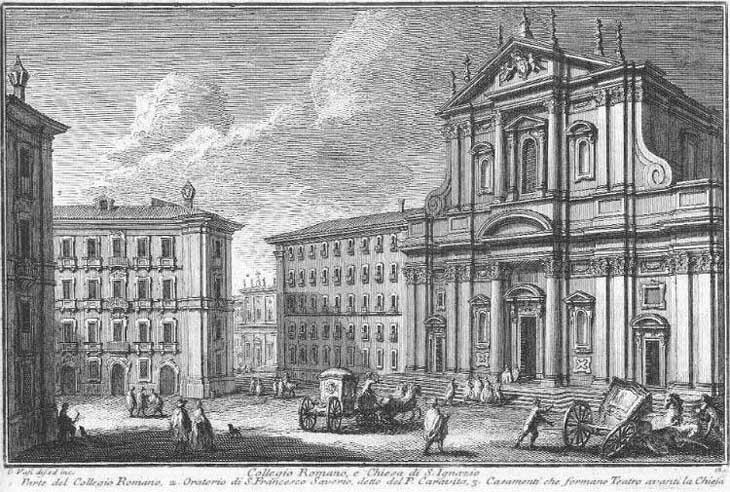 The views of ancient and modern Rome by Giuseppe Vasi usually focused on the monuments of the Eternal City and they rarely sketched aspects of daily life; this 1759 etching is an exception to the previous statement because it gives relevance to a luxury coach with a collapsed axle; maybe Vasi had in mind an actual event which involved someone he knew, but in the text accompanying the plate he did not provide any clue to explain his choice. Traffic in XVIIIth century Rome is a page with a small selection of traffic scenes taken from Vasi's etchings.
The view is taken from the green dot in the 1748 map below. In the description below the plate Vasi made reference to: 1) Part of Collegio Romano; 2) Oratorio del Caravita; 3) Buildings forming a theatre opposite the church. 1) is shown in another page. The map shows also 4) S. Ignazio. The dotted line in the small map delineates the borders among Rione Pigna (lower section), Rione Colonna (upper section) and Rione Trevi (right side). 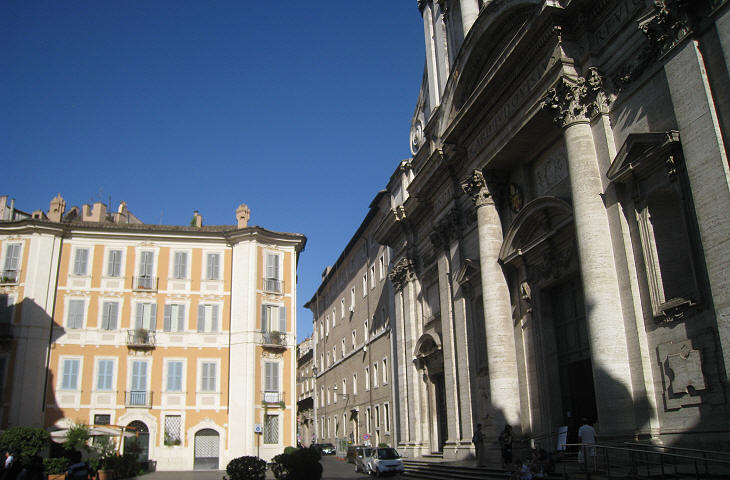 The original project for the façade of S. Ignazio was modified during its construction and the planned height was raised by some 15 feet. The tall façade was completed in 1650 and it would have required a large square in order to be properly viewed. The Jesuits who owned the church asked to be allowed to pull down existing buildings to create that square, but in 1727 they had to accept the decision by Pope Benedict XIII who authorized the redesign of the area with only a small square opposite the church. 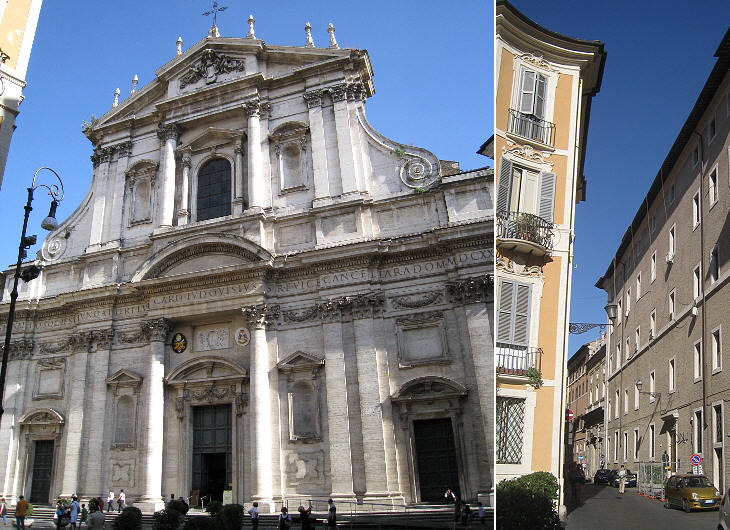 From the point of view chosen by Vasi it is not possible to see the entire façade of S. Ignazio and Oratorio del Caravita (in the narrow street leading to Piazza Sciarra) at the same time. 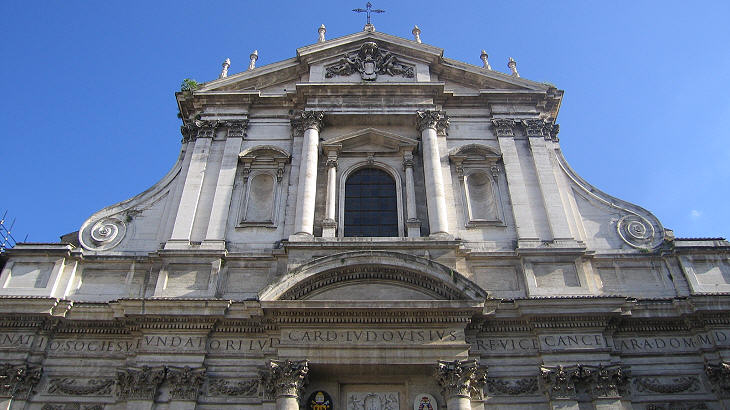 Detail of the façade; the inscription celebrates the role of Cardinal Ludovico Ludovisi, nephew of Pope Gregory XV

In 1562-566 a church was built on the site of today's S. Ignazio; it was dedicated to S. Maria Annunziata and its façade can be seen in a 1588 Guide to Rome. The church however did not meet the requirements of Collegio Romano which was attended by some 2,000 students and in 1626 it was pulled down to make room for a larger church. The construction was financed by Cardinal Ludovico Ludovisi. The new church was dedicated to St. Ignatius of Loyola, the founder of the Jesuit order, who was canonized in 1622.
Orazio Grassi, who taught mathematics at Collegio Romano, designed the new building and his project was endorsed by a commission which included Carlo Maderno, the leading architect of the time. The façade follows the pattern established by Il Gesù, the first large church of the Jesuits. 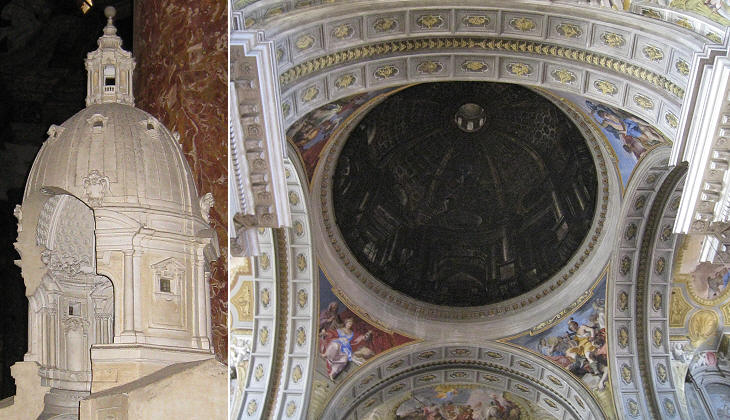 (left) Model of the dome; (right) painted dome by Andrea Pozzo seen from the nave

The initial design of the church included a dome, but when in 1685 the rest of the building was completed, the Jesuits had not enough money left for its construction and in addition there were some worries about the solidity of the walls which should have supported it. At this point Andrea Pozzo, a Jesuit Brother who had acquired fame by designing stages for religious representations and by decorating the rooms where St. Ignatius lived (it opens in another window) at Casa Professa, suggested to temporarily complete the interior of the church by painting an illusionistic view of the dome on canvas. His knowledge of perspective led to a very successful result and the matter was settled for good. In the nave a circular slab of yellow marble indicates the point selected by Pozzo to develop his calculations; moving away from there, one gradually notices that the church has a rather unusual dome (it opens in another window). 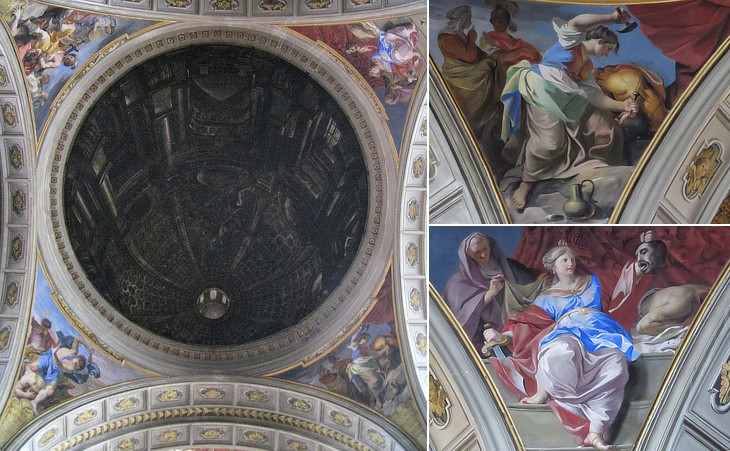 Pendentives of the dome by Andrea Pozzo: (left) Judith and Holofernes; (right) Jael and Sisara (see other scenes of Torture and Death in the Churches of Rome)

Pozzo completed the illusionistic dome by decorating its pendentives. Very often the four pendentives of a dome were decorated with frescoes or mosaics depicting the Four Evangelists (as at S. Pietro), but Pozzo selected other subjects. He surely took this decision with the agreement of the Superior General of the Society of Jesus, yet many criticized the choice to portray Biblical heroines in the act of killing enemy generals in their sleep. The meaning of the paintings was to highlight the victory of Religion over Heresy.

Decoration of the Interior 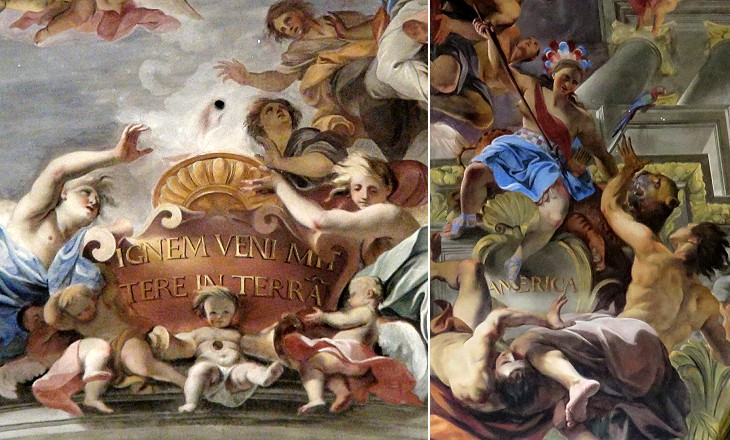 Details of the nave ceiling by Andrea Pozzo: (left) first part of a quotation from Luke 12:49 "Ignem veni mittere in terra"; (right) Allegory of America

The Jesuits were so satisfied with the fake dome that they asked Pozzo to decorate the large ceiling of the nave (you can see the entire fresco in a page with other ceilings). It depicts the Glory/Ascension of St. Ignatius and the activities of the Order.
I came to cast fire on the earth, and would that it were already kindled!, a quotation from Luke 12:49 (ESV), was the theological background out of which St. Ignatius told his Jesuits to Go, set the world on fire and in flame when they departed for foreign missions. The Jesuit missionary presence in the world was celebrated by the depiction of allegories of the four continents known at the time. 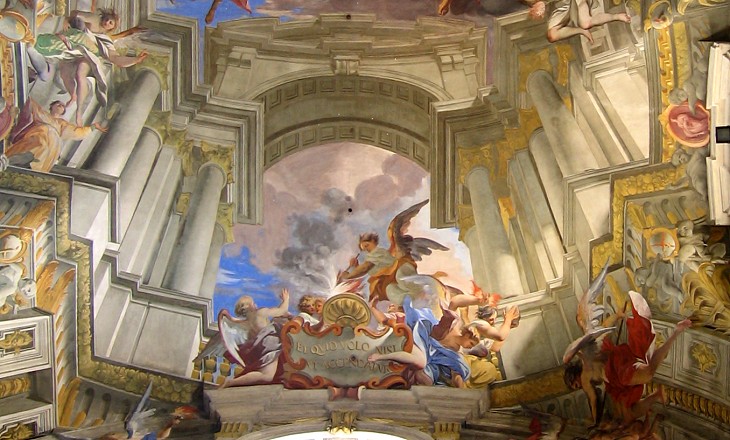 Because of the size of the ceiling Pozzo understood he needed to guide the viewer and help him in fixing his attention on the various scenes. He did so by painting a gigantic open building having two triumphal arches at its long ends. It is regarded as the finest example of quadratura, a deceptive technique based on feigned architecture and scientific calculations.
In 1693 Pozzo summarized his studies on perspective in Perspectiva pictorum and architectorum, a text which had a great influence on the decoration of XVIIIth century palaces, e.g. the Belvedere Palace in Vienna, and churches throughout Europe. 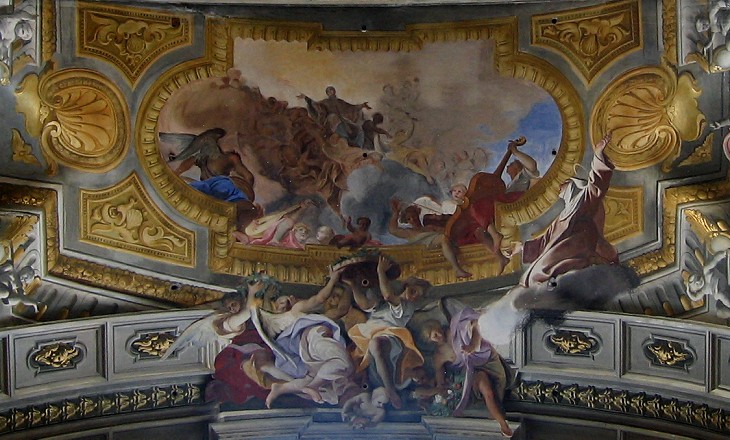 An impressive altar was dedicated to St. Aloysius Gonzaga, a Jesuit who died in 1591 at the age of 23 while caring for the sick during a pestilence; he was canonized in 1605, before the founder of his Order (St. Ignatius of Loyola, canonized 1622). Pozzo emphasized the illusionistic effect of the ceiling above the altar by positioning St. Mary Magdalene de' Pazzi (1566-1607), a Carmelite nun known for her repeated ecstasies, outside the scene.
The fame acquired by Pozzo was such that he was asked to decorate other Jesuit churches, as at Frascati; in 1703 he went to Vienna where he decorated Jesuitenkirche. Fake domes were painted also by other artists e.g. at Gozo, one of the Maltese Islands. (left) Altare di S. Luigi Gonzaga: relief by Pierre Legros; (right) Annunciazione, relief by Filippo Della Valle on the opposite identical altar which was completed in 1750

Pozzo was involved in the design of the altar, but perhaps because the church was already too full of colours it was decided to decorate it with a large marble relief (you may wish to see a page on these altarpieces). Piere Legros (or Le Gros) was a French sculptor who attended the courses of Accademia di Francia. In 1695 he prepared a clay model for a statue (Religion Crushes Heresy) for the Altar of St. Ignatius at il Gesù, which he eventually made in marble, thus becoming a favourite artist of the Jesuits. 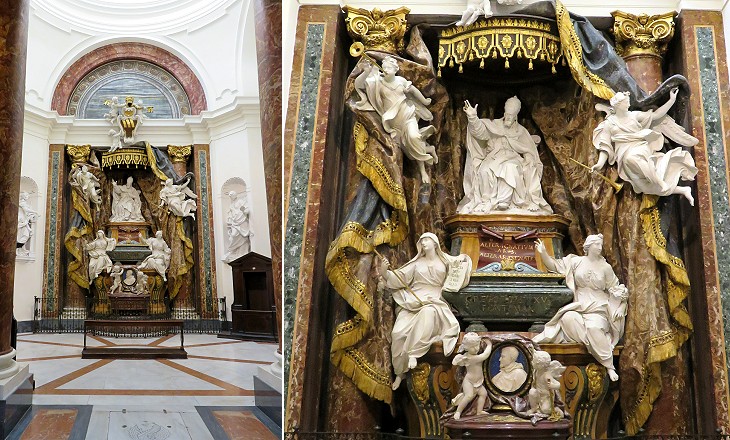 In 1709 Legros received a very important commission by the Ludovisi who wanted to build an imposing funerary monument to Pope Gregory XV and Cardinal Ludovico Ludovisi. It was completed by Pierre-Etienne Monnot, another French sculptor, after Legros had a rift with the Jesuits in 1713. The image shown in the background of this page shows a detail of the monument. Another detail showing the tomb of Cardinal Ludovisi can be seen in a page covering Symbols of Death in Baroque Rome. 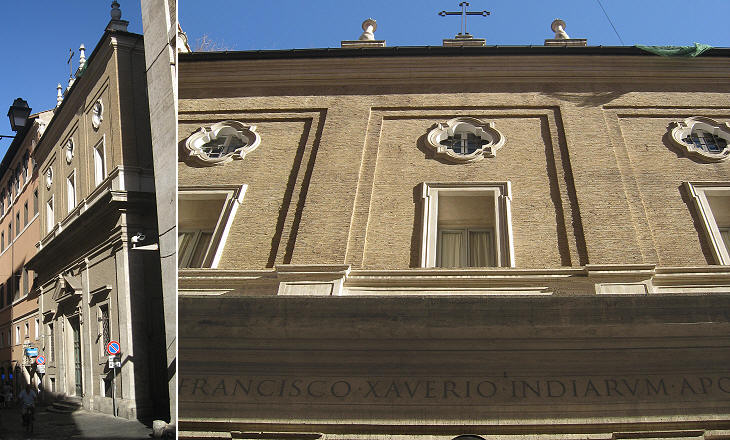 The oratory was built in 1630-633 at the initiative of Father Pietro Gravita, a Jesuit in charge of Missione Urbana i.e. of preaching to the farm labourers of the Roman Campagna, especially to those who worked on a seasonal basis. The oratory became known as Oratorio del Caravita, a corruption of Father Gravita's surname; the building was used for musical performances, educational plays and the worship practice known as Macchina delle Quarant'Ore. 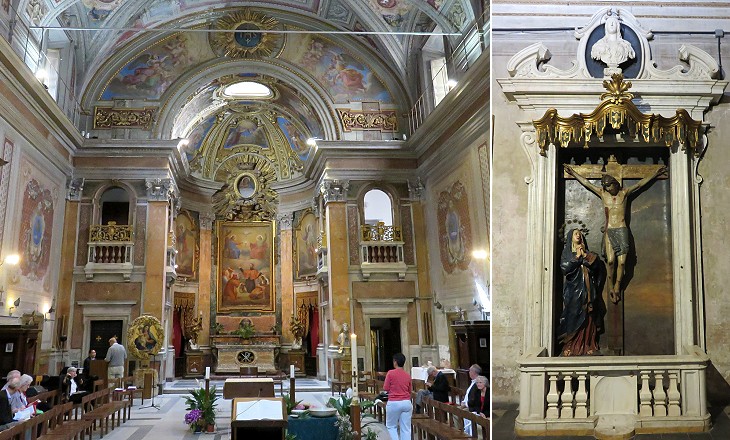 (left) Interior (prior to a meeting of the Caravita Community - it opens in another window); (right) XVIth century wooden crucifix

A famous educational play which was performed in this oratory was Dialogo tra il Sapiente e l'Ignorante in which the two actors impersonating a savant and an uneducated man explained the basic aspects of religion and provided the audience with simple to understand answers to their questions. This method was not developed by the Jesuits, but they found ways to make these plays very amusing. 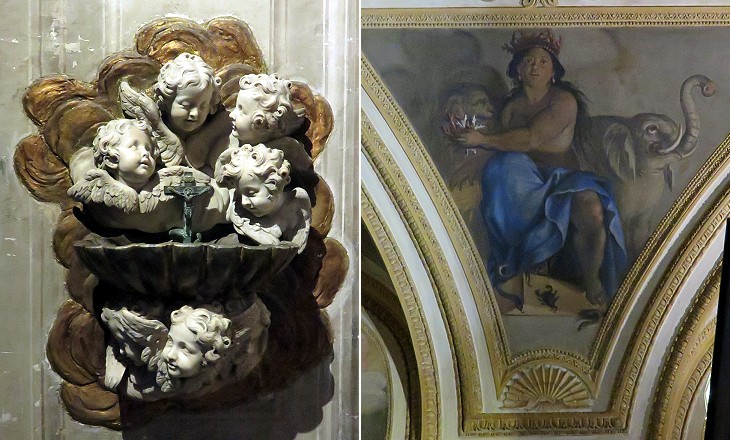 (left) XVIIIth century baptismal font with a crab holding a crucifix, a reference to a miracle which occurred to St. Francis Xavier; (right) Allegory of Africa by Lazzaro Baldi ca. 1673 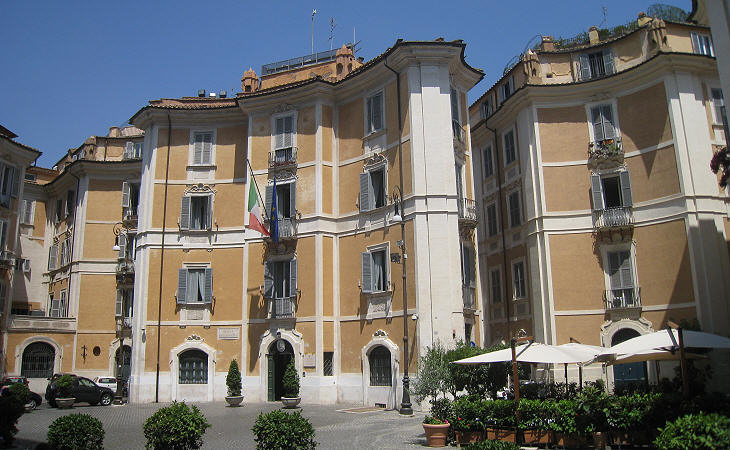 The houses which stood opposite the church were redesigned in 1727-728 by Filippo Raguzzini, the preferred architect of Pope Benedict XIII; they did not belong to important families and they were split into flats. Raguzzini arranged them in a way that they resemble the stage of a theatre.
The buildings surrounding the square were regarded as examples of bad taste by Francesco Milizia, a neoclassic art historian, and foreigners before the XXth century did not talk about them in their travel accounts, but today's guidebooks describe the square as delightful and a "theatrical" masterpiece.