Roman Spoleto
(relief of a tabernacle in S. Gregorio Maggiore)

(left) The route of the train; (right) view of the Umbrian Valley from Spoleto - in the lower part of the image S. Ponziano and in the distance (upon a hill) Trevi

Between Terni and Spoleto the railway winds by cuttings and tunnels through the Monte Somma, which in vetturino days was a most picturesque and interesting pass. It is said to derive its name from a temple of Jupiter Summanus on its summit. We emerge from the mountains close to the grand old archiepiscopal city of Spoleto which covers the sides of a lofty hill, while, behind, rises its fortress, and then the great Monte Luco, dotted with hermitages peeping out of the rich foliage of evergreen woods.
Augustus J. C. Hare - Days near Rome - 1875
After Terni the train leaves the Nera valley and it moves northwards through a ridge of low mountains: it soon reaches a large valley known as Valle Umbra (Umbrian Valley), which was also called Valle Spoletina, after Spoleto, the town located on a hill at its southern end. In ancient times the valley was covered by a lake; the deposits carried by the streams flowing into the lake from the Apennines gradually filled it and eventually the Etruscans opened a canal at the northern end of the lake to allow the remaining water to flow into the Tiber. 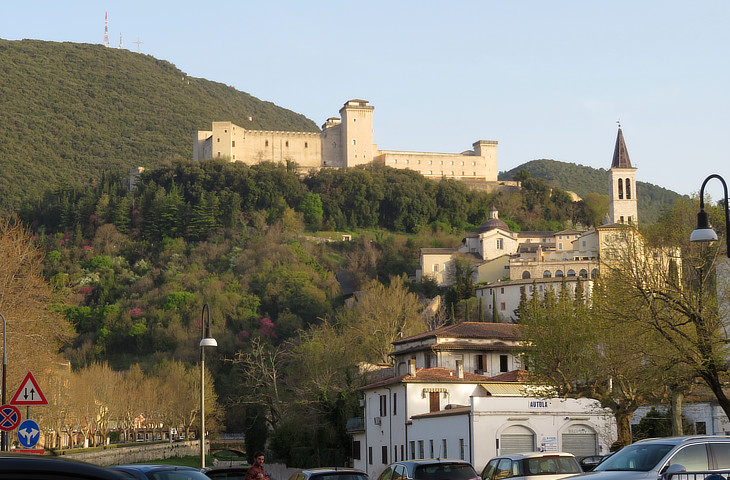 View of Spoleto at sunset showing the Cathedral, the fortress and Monteluco

After being buried in the recesses of the mountains for so many hours, Spoleto presented many fine and striking aspects. It seemed to me I had never beheld so picturesque an object as that dark old fortress crowning it, with its towers, its crenellated walls and low battlements. As the golden rays of the setting sun struck full upon it, it looked like an ideal city arranged in the grand historical style. (..) The streets of Spoleto slope gently upwards to pleasant squares, wonderfully picturesque and thoroughly Italian in character. Portions of the town are uninhabited and falling into ruin, yet one easily perceives that it has been the centre from which a minor monarch has ruled over a rich district, though it now barely possesses 9000 inhabitants within its walls.
Ferdinand Gregorovius - An excursion through Sabina and Umbria in 1861 - Transl. by Dorothea Roberts 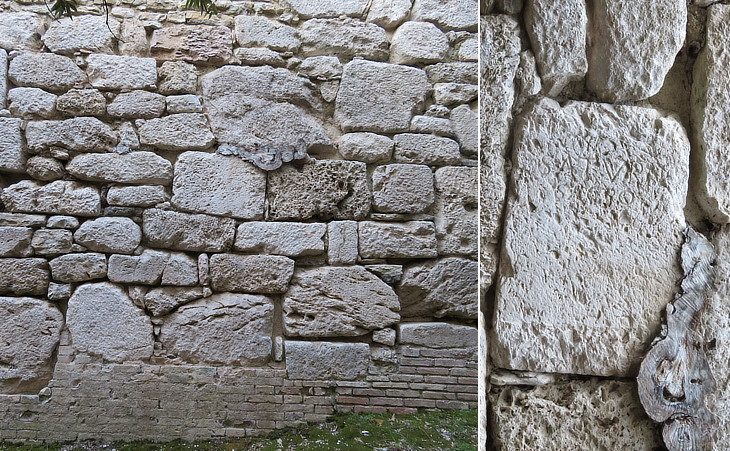 (left) Ancient stones of an area sacred to Saturn at the top of the hill which were used to build a wall supporting the fortress; (right) stone with the inscription "Saturno Sacro"

The valley was always at risk of becoming a marshland until the Romans in the Ist century BC assigned its territory to a large number of veterans. They dug canals, planted willow trees and poplars to absorb the excessive water, introduced a farming mix which included grains, orchards, olive trees and vineyards. They dedicated an area to Saturn, the god who, according to them, taught agriculture to men.

The local Nymphs and Fauns once lived in these groves,
and a race of men born of trees with tough timber,
who had no laws or culture, and didn't know how
to yoke oxen or gather wealth, or lay aside a store,
but the branches fed them, and the hunter's wild fare.
Saturn was the first to come down from heavenly Olympus,
fleeing Jove's weapons, and exiled from his lost realm.
He gathered together the untaught race, scattered among
the hills, and gave them laws, and chose to call it Latium,
from latere, 'to hide', since he had hidden in safety on these shores.
Under his reign was the Golden Age men speak of.

Virgil - The Aeneid - Book VII - Translation by A. S. Kline 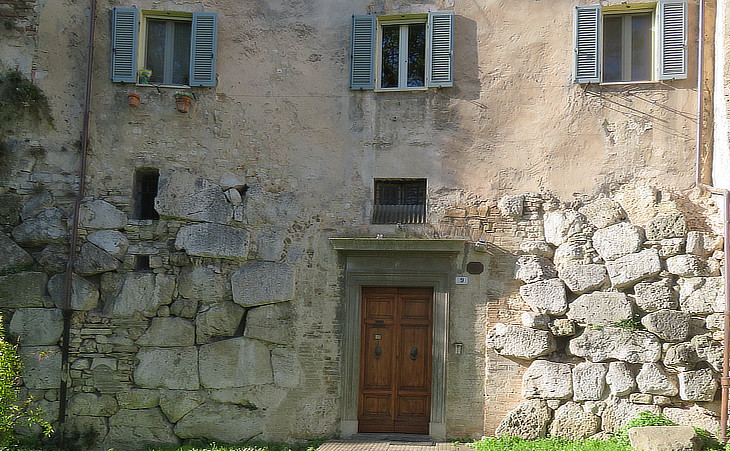 From Terni we had mountainous way and thence we descended to Spoleto, the chief town of Umbria thence called Ducato Spoletano. The walls of this City are of a large extent, and the houses indifferently fair, and there are to be seen many ruines of ancient buildings in it.
John Ray - Observations (..) made in a journey through part of (..) Italy in 1663
Spoleto was built by the Romans on an existing settlement of the local Umbrian tribes: the lower part of the Roman walls shows sections which made by these early inhabitants of the site (see similar walls at Amelia). The Latin Inscription on one of the Gates is thus in English. "Hannibal having routed the Romans at the Lake Trasymenus, and marching to Rome with his Victorious Army, was repuls'd at Spoleto with great Slaughter of his Men, and by bis Flight gave an Honourable Name to this Gate".
The Travels of the Learned Father Montfaucon from Paris thro' Italy in 1698-1701
The ancient town of Spoletum is situated on the side and summit of a hill. It is well-known that Hannibal attacked this town, immediately after the defeat of the Romans at Thrasimenus, and the inhabitants still glory in having repulsed the Carthaginian general, flushed as he was with conquest, and certain of success. An ancient gate commemorates this event, so honorable to the people of Spoleto, in an inscription on the great arch. I have observed with great satisfaction, not only in Spoleto, but in many Italian towns, particularly such as were founded by Roman colonies, a vivid recollection of the glory of their ancestors. Notwithstanding the lapse of so many ages, notwithstanding so many crude and destructive invasions; though insulted and plundered, and almost enslaved, the Italians remember with generous pride, that the Romans were their ancestors, and cherish the records of their glorious achievements as an inheritance of honor, a birth-right to Fame.
John Chetwode Eustace - A Classical Tour through Italy in 1802
Spoleto played an important role during the Second Punic War by stopping Hannibal, who after the victory at Lake Trasimeno, wanted to rapidly reach Rome, but was forced to make a detour because of the resistance of the town: Porta della Fuga (Gate of the Flight), the name given to the northern Roman gate of the town recalls that episode. Spoleto is situated on the side of a hill near a dangerous brook.
Thomas Nugent - The Grand Tour - 1749
In 1816 excavations made to build a modern bridge on the brook at the northern end of the town unearthed the arches of a Roman one. It was called Sanguinario (bloodthirsty) on the assumption that the Romans threw the bodies of the Christian martyrs into the brook from it. Because the level of the ground and of the bed of the brook were much higher in 1816 than in antiquity it was felt more prudent to bury it again. Two arches can be seen on fixed days by going down a sort of pit. It was most likely built or restored at the time of Emperor Augustus who made great improvements to Via Flaminia. The Renaissance prevails to the exclusion of older styles of architecture, yet there are many fragments of the Roman period still to be seen. Gregorovius
Arco di Monterone is dated IIIrd century BC and it was built by properly placing large cut stones. It is partially buried inside the adjoining medieval buildings.
Felici (happy ones) is perhaps a reference to nuns who lived near the arch. (left) Arco di Druso (town side); (centre/right) column and pilaster in the wall of S. Ansano, an adjoining church on the site of a Roman temple

The arch was incorporated into later buildings and it was not noticed by XVIIIth century travellers. In 1955-1957 medieval additions were demolished and the street around one of the pillars was excavated to reach its original level and make more visible some elements of a Roman temple which had a portico of six columns. The arch stood on cardo maximus, the main north-south street of the Roman town. 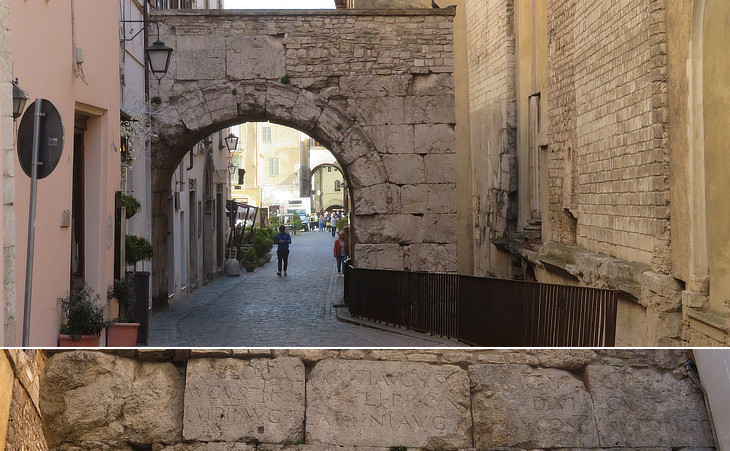 (above) Arco di Druso (external side) with Piazza Mercato, the site of the Roman Forum, at the end of the street: (below) inscription on the town side

Fragments of a long inscription indicated that the arch was dedicated to Germanicus, nephew of Tiberius, and Drusus Minor, son of Tiberius by the Senate of Spoleto. The former died in 19 AD in mysterious circumstances and the same occurred to the latter in 23 AD. The inscription makes reference also to Tiberius, Augustus and Julius Caesar. Site of the amphitheatre seen from the fortress between Via dell'Anfiteatro and the medieval walls along the brook which surrounds the north-eastern part of the town; at its centre S. Maria della Stella

27 October 1786. I walked up to Spoleto and stood on the aqueduct, which also serves as a bridge. (..) A sense of the civic good, which is the basis of their architecture was second nature to the ancients. Hence the amphitheatre, the temple and the aqueduct.
J. W. Goethe - Italian Journey - translation by W. H. Auden and Elizabeth Mayer
Roman Spoleto had an amphitheatre at the northern foot of the hill (and a theatre on its southern slope). It was turned into a fortification by the Ostrogoths in 545. Its walls were eventually dismantled to utilize their stones as construction material for the fortress at the top of the hill and for the new walls of the town. Two nunneries were built in its site. 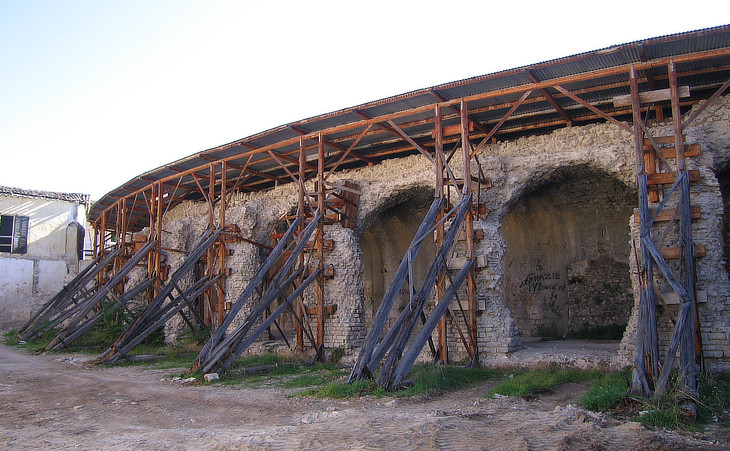 External arches of the amphitheatre

In 1860 the nunneries were confiscated and their facilities were turned into a very large barracks. In 2000 the Army discontinued the use of the barracks and the whole complex was acquired by the City of Spoleto. Work is undergoing to free the remaining evidence of the amphitheatre from later additions. You may wish to see a model of Colosseo and a list of other Roman amphitheatres which are covered in this website. 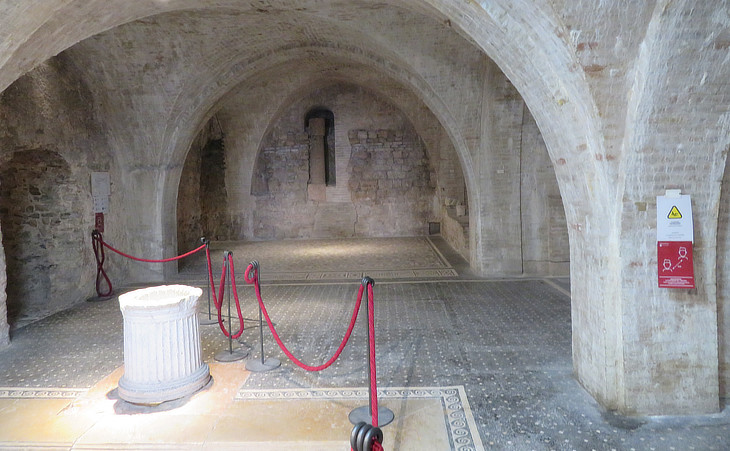 Roman house beneath Palazzo Comunale: "atrium" and behind it the "tablinum"; in the foreground a well and the marble border of the "impluvium", a sunken basin for collecting rainwater (see a page on the Roman houses of Pompeii with examples of their traditional layout)

Excavations being made at S. Pietro in Vincula, among the ruins and remains of the Palace of Titus, in the hope of finding figures, certain rooms were discovered, completely buried under the ground, ....
A passage from Giorgio Vasari which describes the discovery of Nero's Domus Aurea applies also to the discovery of a Roman house at Spoleto.
In the late XIXth century excavations for the enlargement of the Town Hall led to the partial collapse of the vaults of underground halls which eventually turned out to be those of a Roman house. In 1912 they were completely emptied and a direct access to them was opened in a side street. 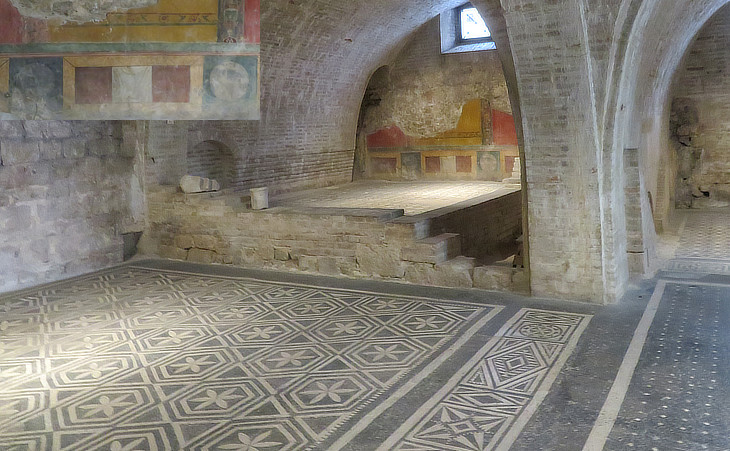 Roman house beneath Palazzo Comunale; "tablinum" and "triclinium" (dining room); (inset) frescoes in the "triclinium"; another image of floor mosaic (a coloured Solomon's knot) is used as background for this page

Because of a fragmentary inscription the house is associated with the mother of Emperor Vespasian and is dated early Ist century AD. At that time the Romans had a predilection for black and white floor mosaics and those at Spoleto recall those of Villa dei Volusii, a villa of the Augustan age in the environs of Rome. The floor mosaics were still in relative good conditions when they were discovered. 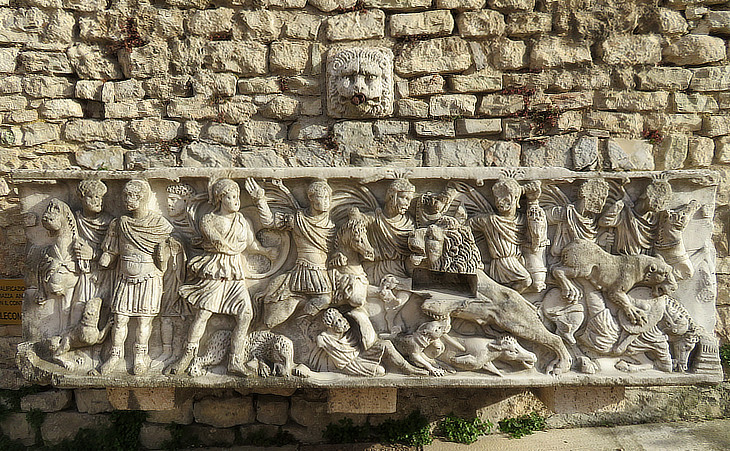 Roman sarcophagus near the Cathedral

In 1954 a sarcophagus from Palazzo Campello was used as the basin for a fountain. It is dated IIIrd century AD and it depicts a lion being hunted by a Roman commander. The subject was rather popular at the time and it can be seen in sarcophagi at Rome, Palermo, Vienna, Barcelona and Reims.

Other pages on Spoleto:
Roman Theatre and Archaeological Museum
Medieval Spoleto
Churches without the Walls
The Cathedral
Renaissance and Baroque Spoleto
or visit Rocca di Spoleto or move to Tempio del Clitunno and Trevi.