You may wish to read a short introduction to this topic.
S. Pietro in Montorio is a XVth century church with very small chapels, not much larger than a niche in the wall. The right side of the church is adjoining the cloister of the monastery so it is not possible to modify the chapels on that side. On the left side there were no other buildings, so in the early XVIIth century Carlo Maderno expanded one of the chapels and in 1642-1646 Gian Lorenzo Bernini did the same to build a chapel for the Raimondi family.
Since his early works for Cardinal Scipione Borghese, Bernini had been interested in the effects of light over a sculpture and had given clear indications on how his sculptures ought to be positioned to obtain the effect he had planned for them. His sculptures are often referred to as pictorial sculptures for the use of light (and sometimes colour). 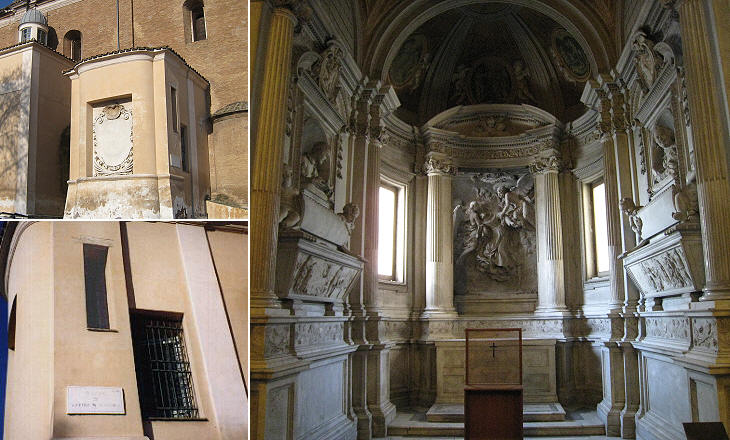 Bernini solved the problem (of using light to produce effects) first in the Raimondi Chapel. (..) Standing in the dim light of the chapel, the spectator looks into the altar-recess and sees, brighdy lit as if by magic, the Ecstasy of St. Francis.
Rudolf Wittkower - Art and Architecture in Italy 1600-1750 Penguin Books 1958
Usually a chapel was conceived like a little church and thus received light from the lantern of the chapel dome. Bernini was unhappy about this central light and for Cappella Raimondi he designed four lateral windows and making use of the thickness of the walls he directed the light of two of them towards the very end of the chapel. 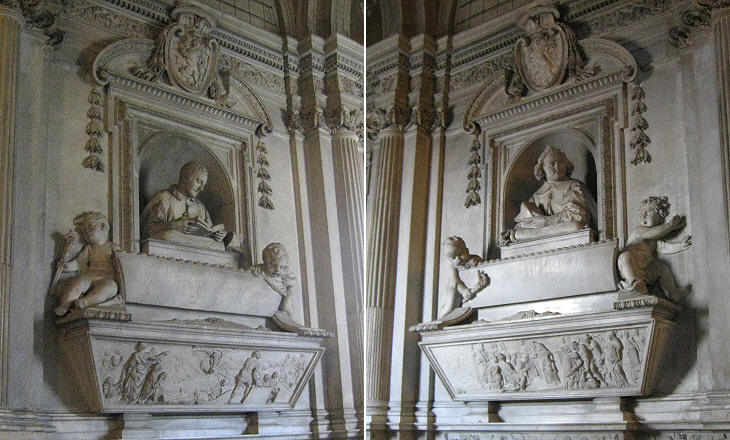 The monuments to Francesco (left) and Girolamo (right) Raimondi by Andrea Bolgi, a scholar of Bernini

Bernini designed funerary monuments which did not require a lot of space and marble. Only the upper part of the body of the dead is visible as if he were behind a kneeling-stool (see a page on this type of monuments). The bust of Girolamo is very interesting because it looks towards the entrance of the chapel, as if he was inviting you to enter. Another interesting feature of these monuments is the space for a small relief: in this case the reliefs are not related to the lives of the dead, but this design will be adopted in many other funerary monuments, in particular in those at S. Pietro to celebrate a particular episode of the lives of the Popes. 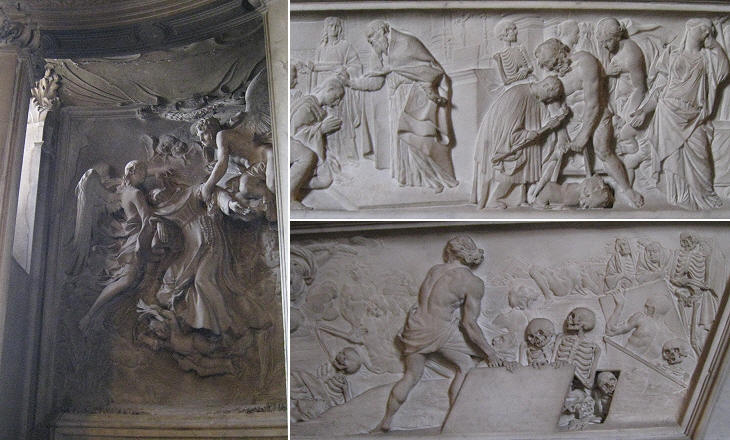 (left) Altarpiece depicting the Ecstasy of St. Francis by Francesco Baratta, a scholar of Bernini; (right) details of the reliefs of the monuments to the Raimondi

Reliefs were very popular as altarpieces in the XVIIth century as they were seen as a perfect combination of picture and sculpture: Bernini himself was not very celebrated for his reliefs, but his rival Alessandro Algardi excelled in this technique (you may wish to see a page on this topic). The details of the reliefs shown above announce the great number of skeletons which for more than a century will jump out of most of the funerary monuments in Rome and elsewhere.

Other chapels by Gian Lorenzo Bernini:
Cappella Cornaro in S. Maria della Vittoria
Cappella Paluzzi Albertoni in S. Francesco a Ripa (the image used as background for this page shows a detail of this chapel)

Other pages dealing with Baroque sculpture:
Statues in the act of praying
Baroque Angels
Monuments showing the dead in a medallion
Representation of Death in Baroque sculptures
Three busts by Alessandro Algardi
Baroque Monuments to the Popes
Bernini's Exiled Statue
Baroque High Reliefs
Statues Close to Heaven
Embittered Andrew (the statues in the Octagon of S. Pietro)
Playing with Colours
The Last Baroque Tomb
Laughing Masks
A Directory of Baroque Sculpture