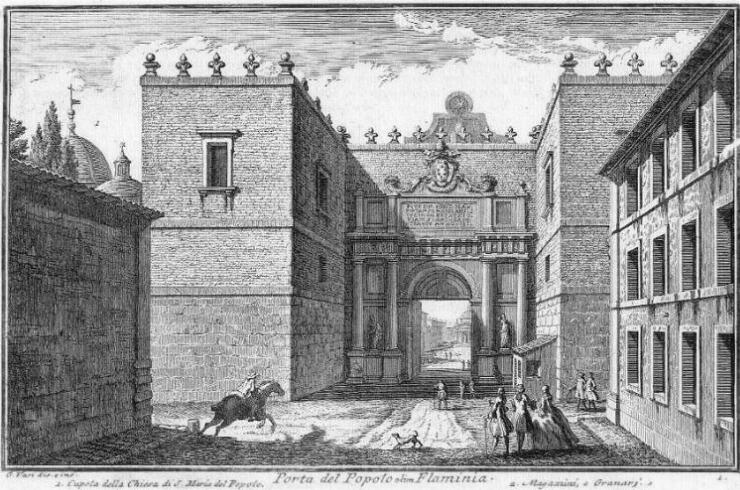 In the opening etching of Book I of Delle Magnificenze di Roma Antica e Moderna, which was published in 1747, Giuseppe Vasi showed that he had studied architecture and not painting before becoming an engraver. He properly represented the solid masses of the buildings and he accurately depicted all their details, but he did not make the image more lively by showing the most important gate of Rome as a busy place, as if he feared to divert the attention of the viewer from the monuments. This etching is more of a technical drawing, than of a life drawing, not only because the few figures are portrayed in a very academic manner, but also because the source of light does not correspond to reality as Porta del Popolo faces north and even in summer it does not receive sunlight at the angle shown in the etching. Besides Vasi showed light coming from the east and it is unlikely that ladies and gentlemen promenaded themselves in the very early morning.
The view is taken from the green dot in the small 1748 map here below. In the description below the plate Vasi made reference to: 1) Dome of S. Maria del Popolo; 2) warehouses and granaries. 1) is shown in another page. The small map shows also: 3) Porta del Popolo; 4) warehouses for storing building timber; 5) site of the Neoclassic entrance to Villa Borghese; 6) Muro Torto; 7) Studiolo del Cardinale at Villa Medici. 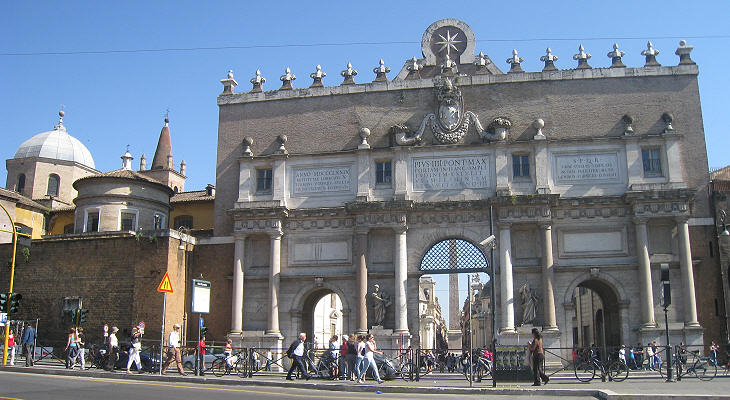 The towers protecting the gate were demolished in 1879 to make room for two additional openings. The decorative frame was enlarged in order to include them; as a result the overall proportion of the gate was modified. In the late 1990s the passage through the openings was reserved to pedestrians. The area in front of the gate is now a large open space (Piazzale Flaminio) and the granaries and warehouses shown in the etching do not exist any longer. 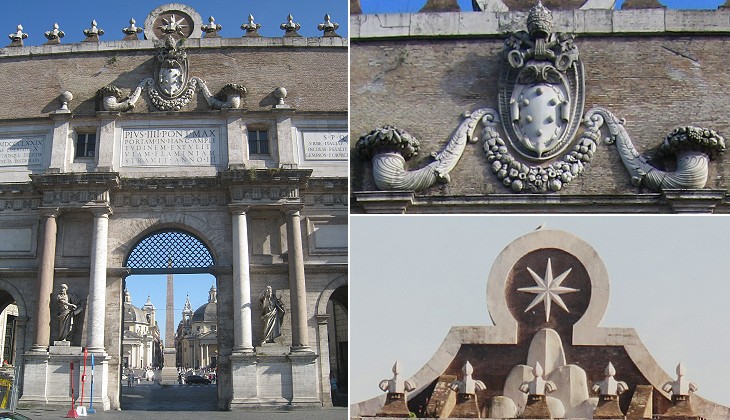 (left) The gate and beyond it Piazza del Popolo with the "Tridente"; (right-above) coat of arms of Pope Pius IV, a detail of its decoration can be seen in the image used as background for this page; (right-below) heraldic symbols of Pope Alexander VII by Gian Lorenzo Bernini

The Porta del Popolo (formerly, Flaminia,) by which we entered Rome, is an elegant piece of architecture, adorned with marble columns and statues, executed after the design of Buonaroti. Within-side you find yourself in a noble piazza, from whence three of the principal streets of Rome are detached. It is adorned with the famous Aegyptian obelisk, brought hither from the Circus Maximus, and set up by the architect Dominico Fontana in the pontificate of Sixtus V. Here is likewise a beautiful fountain designed by the same artist; and at the beginning of the two principal streets, are two very elegant churches fronting each other. Such an august entrance cannot fail to impress a stranger with a sublime idea of this venerable city.
Tobias Smollett - Travels through France and Italy in 1765
Porta del Popolo was built by Pope Sixtus IV for the Jubilee Year 1475 on the site of an ancient Roman gate which at that time was partially buried because the level of the ground had risen owing to floods (the gate is not far from the river).
The external decoration of the gate was designed by Nanni di Baccio Bigio, perhaps with the advice of Michelangelo and il Vignola, during the pontificate of Pope Pius IV; the decoration of the side towards Rome was modified in 1655 by Bernini to celebrate the arrival in Rome of Queen Christina of Sweden.

The statues of St. Peter and St. Paul by Francesco Mochi were added in 1658. They were initially commissioned by the monks of S. Paolo fuori le Mura and they should have been positioned at the sides of the canopy by Arnolfo di Cambio (it opens in another window), but they were never placed there, because of a litigation between Mochi's widow and the monks. They were eventually bought by Pope Alexander VII for the decoration of Porta del Popolo. Similar to other statues by Mochi which also were rejected (it opens in another window) they are characterized by the height of the subjects and by the academic treatment of their clothes. In a previous work, St. Veronica at S. Pietro, Mochi was more in line with Bernini's predilection for "flying" clothes. (left) Cappella Chigi and behind it dome and bell tower of S. Maria del Popolo; (right) 1780 inscription by Pope Pius VI celebrating the enlargement of the warehouses for building timber

The heraldic symbols of Pope Alexander VII can also be seen on the dome of Cappella Chigi in S. Maria del Popolo; the chapel gained a wide fame in recent years because novelist Dan Brown set episodes of his novel Angels and Demons there (see a page on the accuracy of this novel).
A very large inscription on the wall to the right of Porta del Popolo celebrates a 1780 improvement to the facilities where building timber was stored; they were located near the river and they were demolished in 1906 (the inscription was then moved to where it is now); the first reason mentioned for the new facilities was ne quid lignis periculi sit a latronibus (in order that timber would be not at risk of being stolen).

When the towers built by Pope Sixtus IV at the sides of Porta del Popolo were demolished, the remains of a very peculiar funerary monument were found (a similar discovery was made at Porta Salaria): it was built by a famous charioteer who amassed a fortune by winning more than 2,000 races in Circus Maximus. Hoc monumentum vivus feci - I built this monument while I was alive - is a statement of a (now lost) inscription which provided interesting details on the Roman racing world and its factions (Red, Blues, Greens and Whites); because of his nickname (Gutta - drop) Aelius Calpurnianus was most likely a short man of light weight, similar to today's jockeys. You may wish to see another funerary monument depicting a chariot race which was found at Lyon. 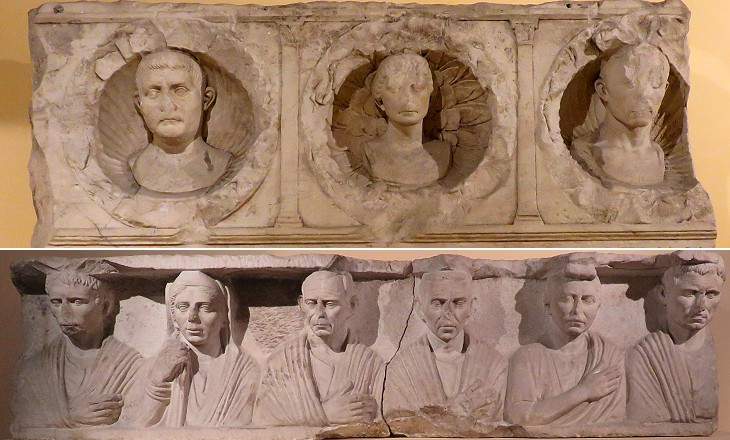 Centrale Montemartini: other funerary reliefs found in the towers flanking Porta del Popolo: (above) relief of the Bennii family (Ist century AD); (below) relief of the late Ist century BC. Its dating is based on the hairstyle of one of the women which resembles that of Livia, Emperor Augustus' third wife (you may wish to see a head of Livia at the Museum of Ephesus) 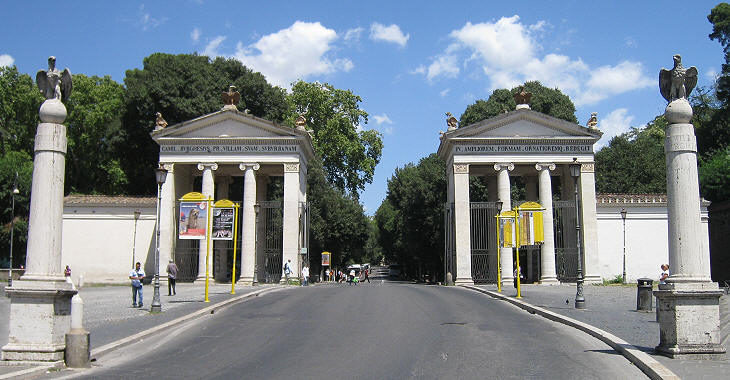 Prince Camillo Borghese, husband of Paolina Buonaparte, Napoleon's sister, enlarged his family villa by acquiring estates from Giustiniani and Odescalchi; prior to this expansion the villa could be reached only by remote Porta Pinciana, whereas the new acquisitions allowed the construction of a new grand entrance very near Porta del Popolo in 1827; architect and archaeologist Luigi Canina designed two propylaea (before the gate) similar in purpose to those which flanked the access to Athens' Acropolis. 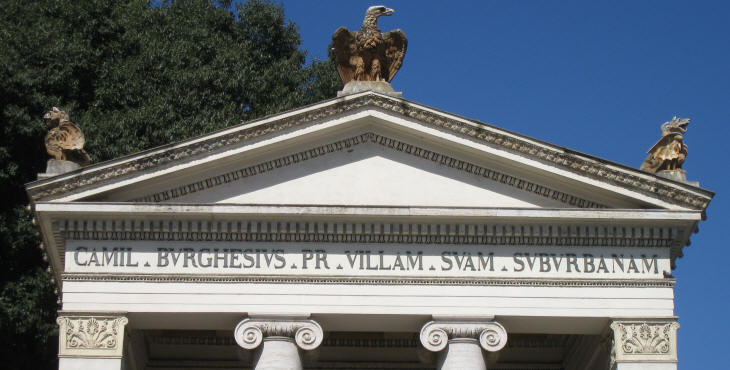 Detail of the left propylaeum showing the Borghese heraldic symbols

The entrance to the Villa Borghese is just outside the Porta del Popolo. Passing beneath that not very impressive specimen of Michael Angelo's architecture, a minute's walk will transport the visitor from the small uneasy lava stones of the Roman pavement, into broad, gravelled carriage drives, whence a little further stroll brings him to the soft turf of a beautiful seclusion. A seclusion, but seldom a solitude; for priest, noble, and populace, stranger and native, all who breathe the Roman air, find free admission, and come hither to taste the languid enjoyment of the day-dream which they call life.
Nathaniel Hawthorne - The Marble Faun - 1860
You may wish to spend a Sunny Day at Villa Borghese. 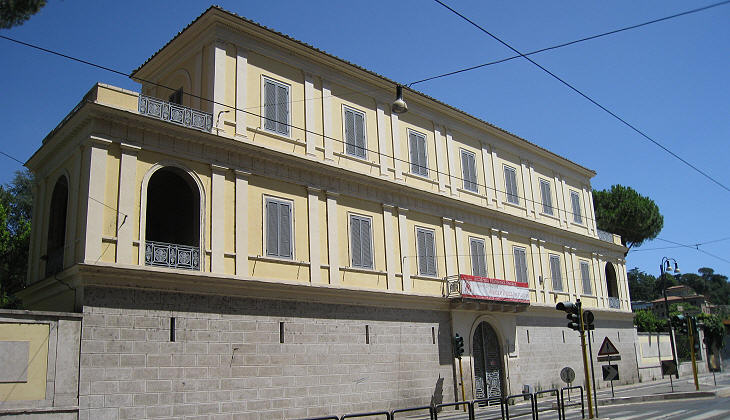 Porta del Popolo is also known as Porta Flaminia because it is the starting point of Via Flaminia which links Rome with Rimini; its initial section flanked a large villa belonging to the Cesi family. This villa was partitioned at the beginning of the XIXth century and a small Renaissance casino along Via Flaminia was modified first by Giuseppe Valadier and then by Luigi Canina, who gave it a Neoclassical aspect.
Today it houses Accademia Filarmonica Romana, a musical institution founded in 1821 (you may wish to see their website - it opens in another window).

The Walls between Porta del Popolo and Porta Pinciana The walls between Porta del Popolo and Porta Pinciana are called Muro Torto (Bent Wall) because at one point they seem on the verge of collapsing; this section of the walls supports the pressure of the Pincio hill; according to a legendary tale in 537 the Ostrogoths saw St. Peter at the top of the walls and were so scared that they desisted from sieging Rome. 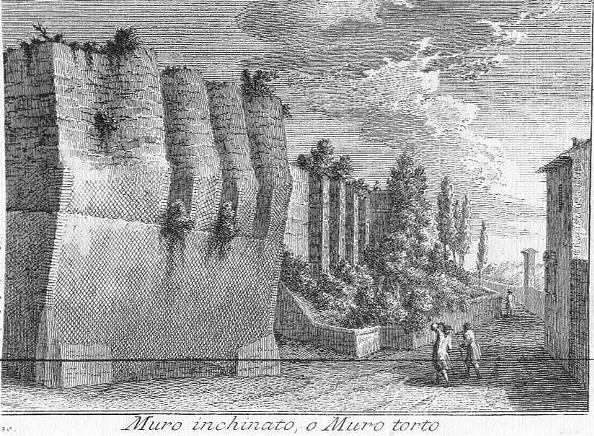 Vasi added a small etching showing Muro Torto which the popes did not strengthen because they relied on St. Peter's protection. 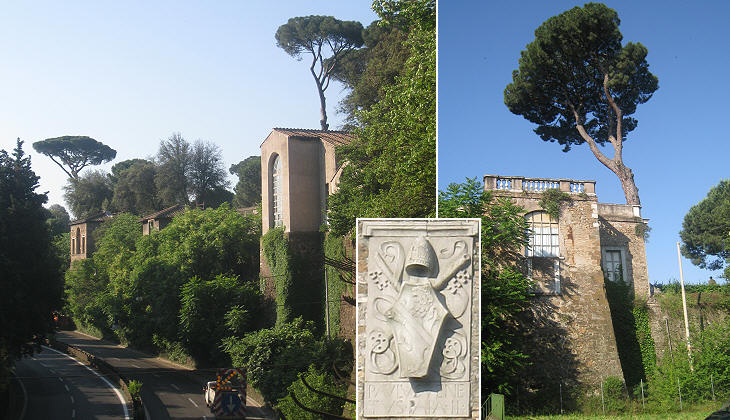 Towers along the walls surrounding Villa Medici which have been modified to house the loggia of Studiolo del Cardinal Ferdinando and the workshops of the French artists who live in the villa since the early XIXth century; (inset) coat of arms of Pope Paul II

With the exception of Muro Torto, the rest of the walls were repaired by Pope Paul II, but many towers have lost the aspect of a fortification because they were modified by the owners of Villa Medici.

Next plate in Book 1: Porta Pinciana.
Next step in Day 1 itinerary: Piazza del Popolo.
With the visit to Muro Torto you have completed Day 2 itinerary! Move to Day 3: Via del Babuino.
Next step in your tour of Rione Campo Marzio: Villa Medici.