SS. Vincenzo e Anastasio a Trevi
(Vasi at work in the Grand View of Rome) 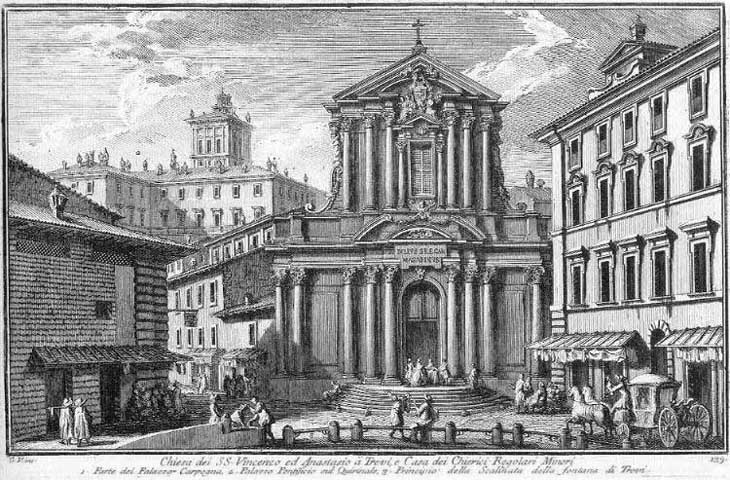 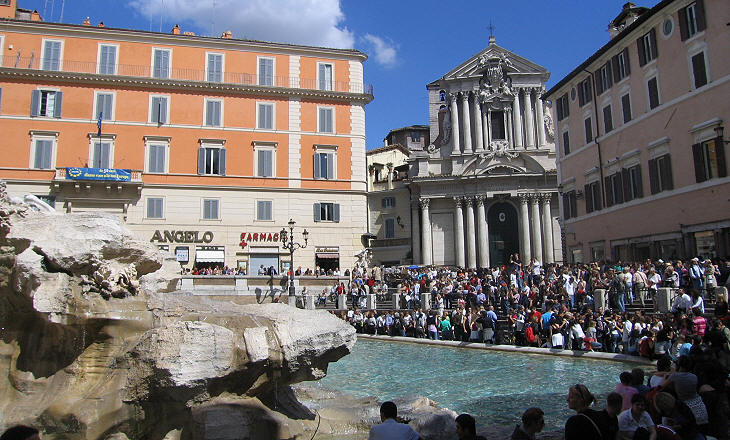 Very few tourists leave Rome without having tossed a coin in Fontana di Trevi, so on a sunny day there is always a jolly crowd around the fountain. The construction of Palazzo Castellani in 1868-1869 (the large white and pink building to the left of the church) hides the view of Palazzo del Quirinale. 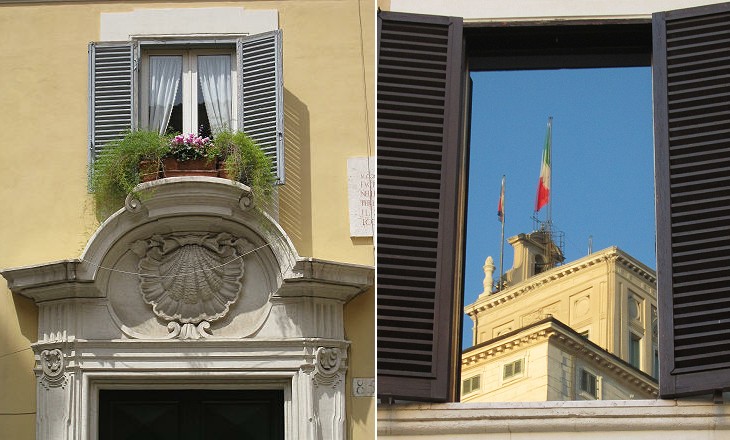 In order to see Palazzo del Quirinale it is necessary to reach a small square behind SS. Vincenzo e Anastasio. It is surrounded by low buildings among which Palazzo Celani attracts the attention of the viewer for its fine XVIIIth century decoration. You may wish to see a corner of this neighbourhood in a 1909 watercolour by Yoshio Markino. 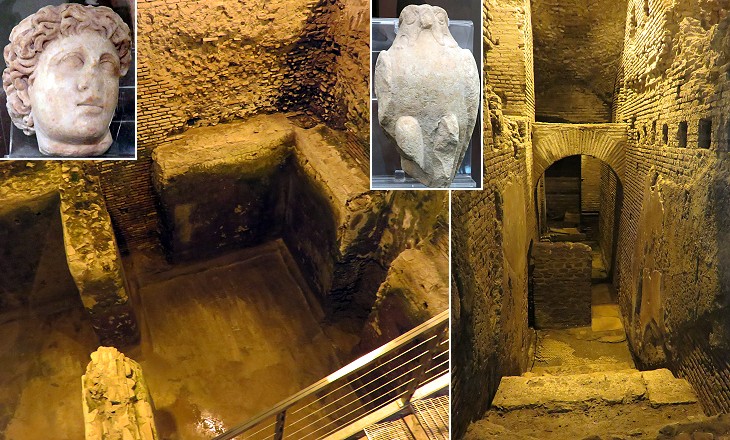 Excavations near Palazzo Celani: (left) "Castellum" dell'Acqua Vergine; (right) part of an "insula"; (insets) head of Alexander the Great and statue of a hawk

In 1999 evidence of ancient walls was found during the internal redesign of a building near Palazzo Celani. Careful excavations led to the identification of a cistern (castellum aquae) for the distribution of Acqua Vergine, an ancient Roman aqueduct which was built by Marcus Vipsanius Agrippa (Emperor Augustus' son-in-law) to supply water to the baths named after him (and eventually to Fontana di Trevi). The cistern is dated ca 123 AD, during the reign of Emperor Hadrian. Other walls showed that an insula (apartment block) stood near the cistern before being turned into a luxury house. A number of objects belonging to different periods were found and are on display in a small exhibition hall. This private archaeological area is open to the public (Vicolo del Puttarello 25). A minor church dedicated to St. Anastasius was recorded on this site as early as the Xth century; in 1570 a revised edition of the Roman Missal, the liturgical book of the Catholic Church, fixed the feasts of St. Anastasius and St. Vincent on the same day (January 22). The two were both martyrs, but of different countries and historical periods: St. Vincent lived in Spain and was put to death during the persecution ordered by Emperor Diocletian; St. Anastasius of Persia, was a soldier who became a convert (hence his Greek name which means reborn) and was executed in 628 by Chosroes II, King of Persia. The church was therefore dedicated also to St. Vincent.
The reputation of Martino Longhi the Younger (..) is mainly based on one work of outstanding merit, the facade of SS. Vincenzo cd Anastasio in the Piazza di Trevi, built for Cardinal Mazarin between 1646 and 1650. The front, thickly set with columns, is superficially similar to that of S. Maria in Campitelli, but the similarity consists in High Baroque massiveness rather than in any actual interdependence. (..) The principal feature of the facade is three free-standing columns at each side of the central bay, forming a closely connected triad which is repeated in both tiers. This repetition, together with the slight stepping forward of the columns towards the centre, gives the motif its brio and power.
Rudolf Wittkower - Art and Architecture in Italy 1600-1750 - Penguin Books 1958 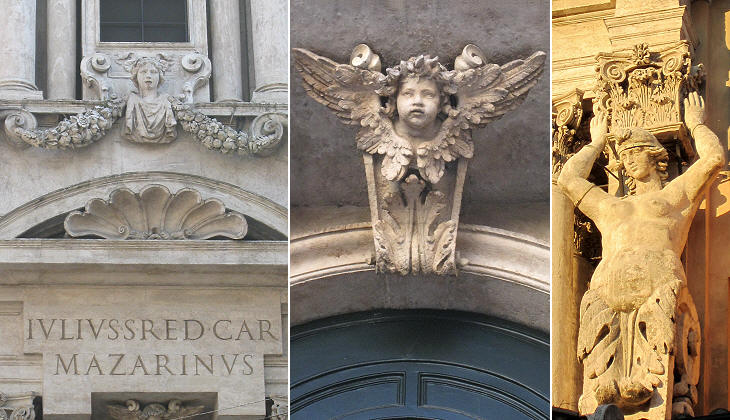 Other details of the façade. SREDCAR means "Sanctae Romanae Ecclesiae Diaconi Cardinalis". According to a traditional account the caryatid was believed to be a portrait of Ortensia Mancini, a beautiful niece of Cardinal Mazzarino, but she was only four years old when the church was built

The choice by Cardinal Mazzarino to rebuild the church was due to the fact that it was near the palace he had bought near Palazzo del Quirinale. The façade was designed by Martino Longhi il Giovane and its complex decoration indicates that the Cardinal wanted to show his might and his wealth. At that time he was at the peak of his power as Prime Minister of France, because King Louis XIV was still a boy and he enjoyed the trust of Anne of Austria, the Queen Regent (actually he was rumoured to be her lover). 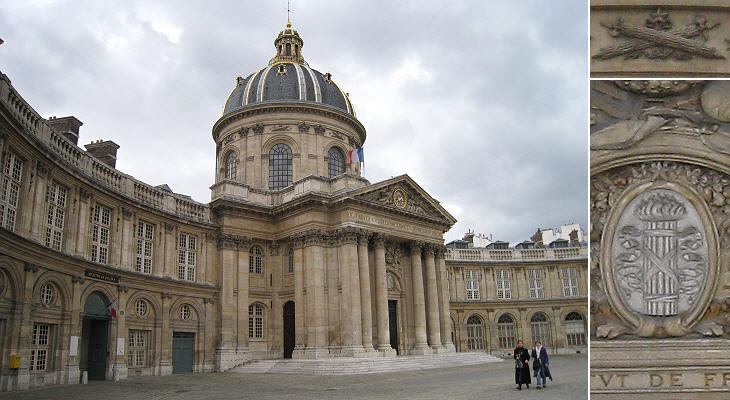 Cardinal Mazzarino did not promote only the construction of SS. Vincenzo e Anastasio in Rome; he also bequeathed a very large amount of money for the foundation of a college in Paris for students from the four territories he had added to the Kingdom of France. The college was designed by Louis Le Vau and it shows the influence of Gian Lorenzo Bernini on his French colleague; Bernini visited Paris in 1665 (see a page on his journey). 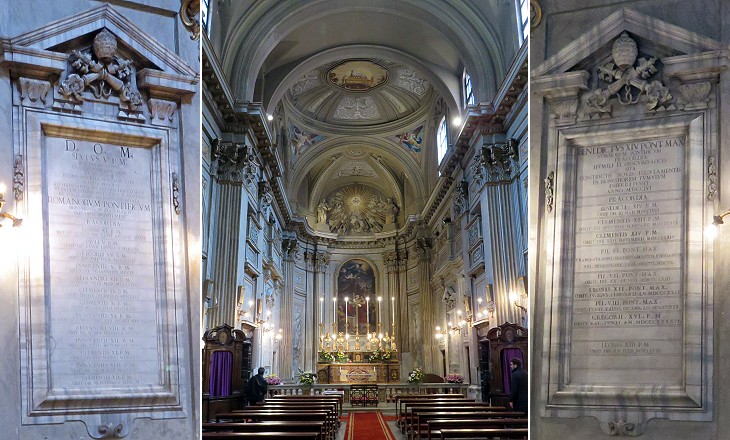 (left) Inscription with the list of the first popes (from Sixtus V to Clement XII) whose "praecordia" are housed in a chapel behind the main altar; (centre) interior of the church; (right) second list of papal "praecordia" (from Benedict XIV to Leo XIII who died in 1903)

Cardinal Mazzarino wanted to build two grand funerary monuments inside SS. Vincenzo e Anastasio, but the plan was not implemented. We know that the interior was finely decorated and that it contained many works of art. Eventually many paintings and statues were moved to other churches and a XIXth century refurbishment cancelled the original decoration.
Today the church is mainly known because it was chosen to house the praecordia (hearts and some inner parts of the human body) of the Popes, because it was close to their palace. This practice was discontinued by Pope Pius X. 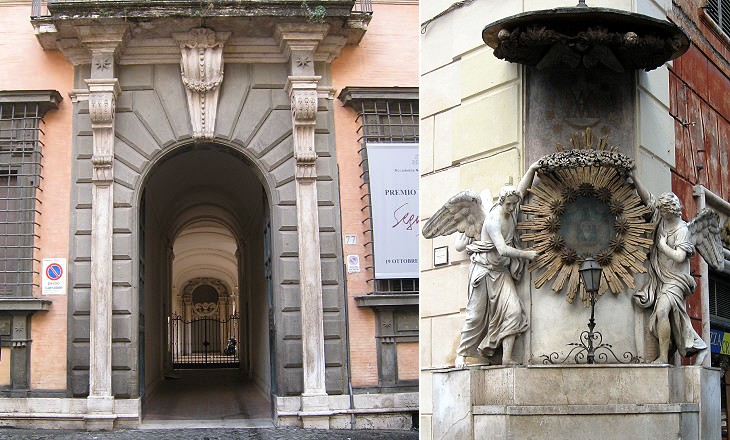 Ambrogio Carpegna, lord of a small fiefdom near Mount Carpegna and a relative of two cardinals, wanted the palace he bought in the early 1630s to be among the largest and richest ones of Rome. Francesco Borromini designed for him several very innovative projects, but in the end the improvements actually made were rather minor; the façade of the building retains its late XVIth century appearance, but the design of the portal was modified by Borromini. The Carpegna had another palace near Palazzo Madama and a villa outside Porta Pertusa. 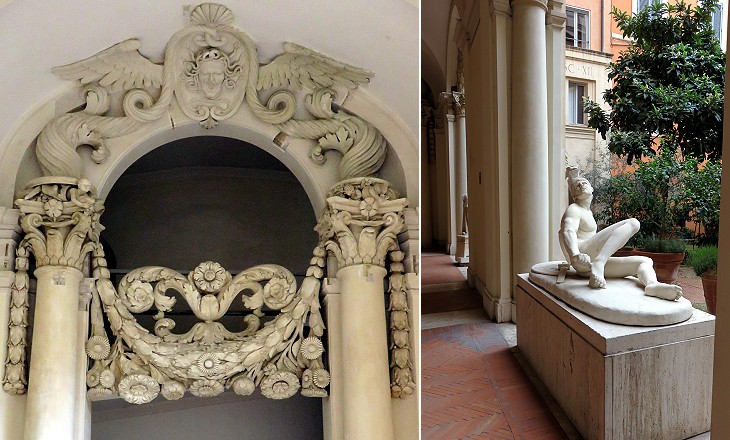 (left) Arch designed by Francesco Borromini; (right) Wounded Achilles by Filippo Albacini (1854), a duplicate of his best known statue (now at Chatsworth House) that the sculptor made for Accademia di S. Luca

Only the long entrance closed by an arch was completed according to Borromini's plans. The elaborate design of the arch is thought to symbolize the harmony which existed between two branches of the Carpegna family.
In 1934 Palazzo Carpegna was assigned to Accademia di S. Luca, in origin the guild of the Roman artists and today a national institution for the promotion of fine arts; previously the guild was housed in a building near SS. Luca e Martina which was pulled down in the 1930s. 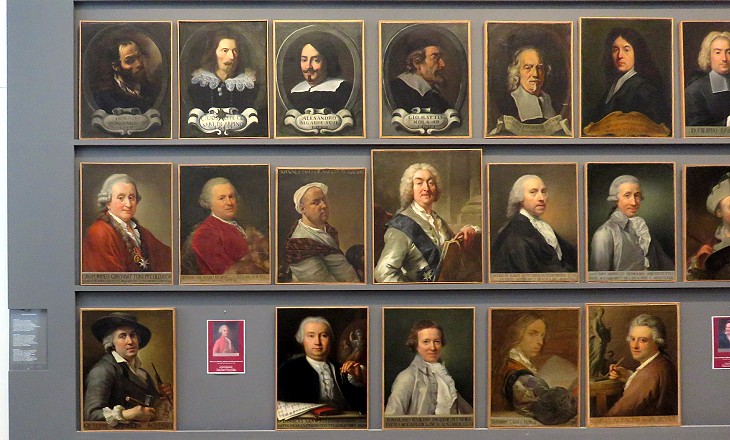 Portraits of members of Accademia di S. Luca, including many Princes of the guild. Gian Lorenzo Bernini is the fifth in the upper row in a 1692 posthumous portrait by Giuseppe Ghezzi

Accademia di S. Luca (St. Luke the Evangelist was the patron saint of painters because according to tradition he painted many images of the Virgin Mary) was the guild of the Roman artists. Its foundation was endorsed by Pope Gregory XIII in 1577. It was chaired by a Prince, usually, but not always, one of the leading artists, who was elected by the members for one year. In 1633 Pope Urban VIII levied a tax on all artists and art dealers in order to support the activities of the guild. In 1714 it was formally forbidden to those who were not members of the guild to work other than for the interior decoration of private buildings. 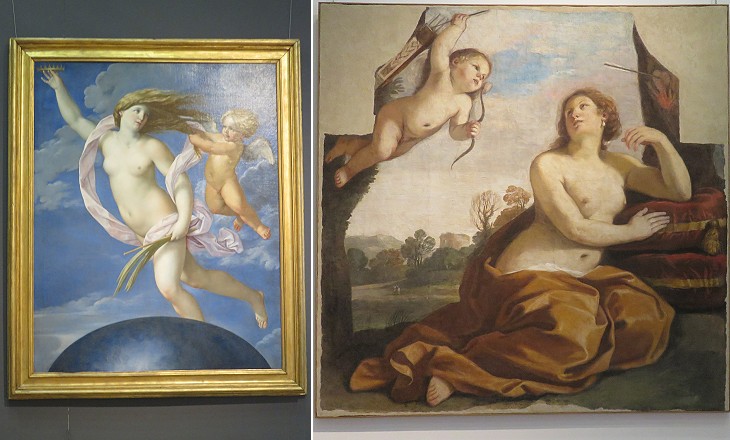 Gaining admittance to Accademia di S. Luca was not easy because the application had to be endorsed by influential members. In the early days of the guild some applicants who came from other towns donated one of their works to the guild in order to show their talent. Eventually this became a rule and Palazzo Carpegna houses a small art gallery where some of the gifts by the most famous members are on display.

Initially Accademia di S. Luca was chiefly a guild of painters where sculptors and architects were rather snubbed. By the end of the XVIIth century sculptors and architects gained the same status as painters. In 1702 Pope Clement XI announced a competition (Concorso Clementino) to promote the recognition of new talents. It had separate sections for painting, sculpture and architecture and Accademia di S. Luca was asked to select the winners. Filippo Juvarra won the 1705 contest for architects and in addition to the reward he became a member of the guild. His admittance gift was a project for a church having a central dome. He was not able to build it in Rome, but with some changes it now stands on a hill near Turin. 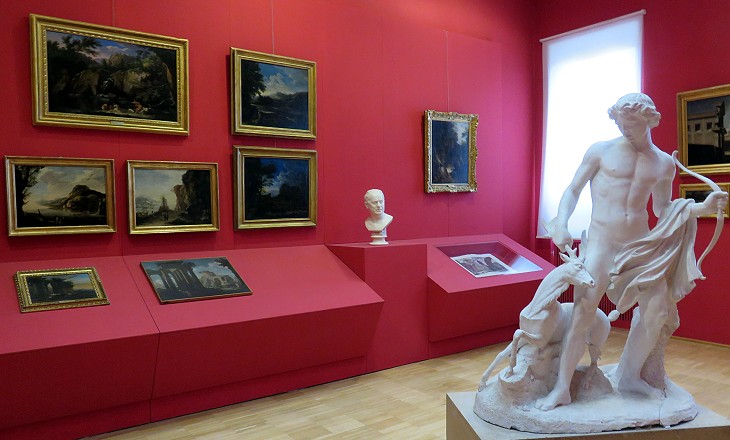 Accademia di S. Luca: a hall of the gallery and in the foreground Meleager and the Deer by John Gibson (the image used as background for this page shows Ganymede and the Eagle, i.e. Jupiter, by Bertel Thorvaldsen)

Many non-Italian artists who lived in Rome worked for customers in their home country and did not need to join Accademia di S. Luca, e.g. the Bentvueghels, Flemish painters known for their meetings at S. Costanza. Being a member of the guild however was a sign of certified talent and many of them applied for membership. Simon Vouet was elected Prince in 1624-1627 and he was the first of many foreigners who held that position (including Bertel Thorvaldsen in 1827-1828). 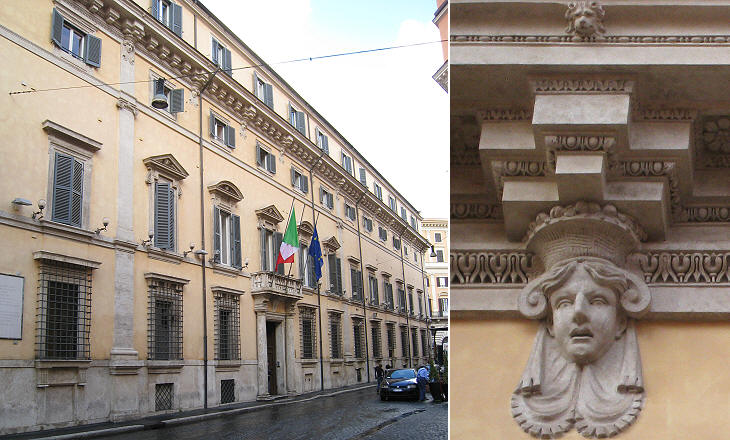 Palazzo della Stamperia was built for the Venetian Cardinal Luigi Cornaro by Giacomo del Duca in 1582-1584. In 1647 it was bought by Donna Olimpia Maidalchini Pamphilj, sister-in-law of Pope Innocent X. It is therefore also called Palazzo Cornaro Pamphilj. Its current name is due to the fact that the papal printing house (stamperia) was relocated to this building in 1777. In 1647 Federico Cornaro, another cardinal of this family, commissioned Bernini a chapel at S. Maria della Vittoria, one of the artist's masterpieces. 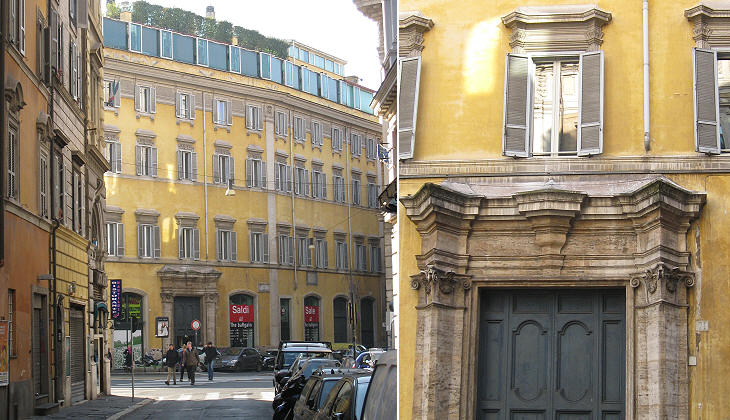 (left) Palazzo Gentili Del Drago; (right) detail of the portal and of the windows

Palazzo Gentili Del Drago was built in the first half of the XVIIIth century by Cardinal Antonio Saverio Gentili. Its design is characterized by the projecting shape of the frames of its windows and main door; the architect is unknown, although some believe Domenico Raguzzini who designed Villa Gentili was involved in the construction of this palace.
The left side of the building was pulled down in 1900 to make room for the street leading to il Traforo, a tunnel under the Quirinale Hill. 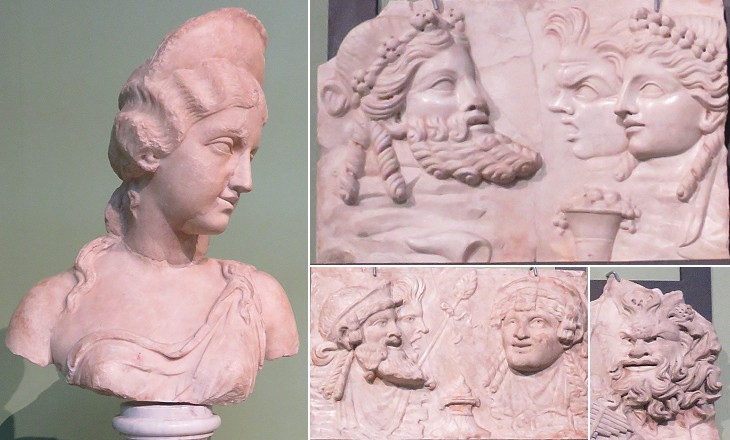 Gaius Fulvius Plautianus was a friend of Emperor Septimius Severus and he managed to marry his daughter Plautilla to Caracalla, Severus' son. His influence over the Emperor aroused the envy of Caracalla who accused him of plotting against Severus and had him executed in 205. In 212 Caracalla exiled Plautilla to Lipari, an island near Sicily, and shortly after ordered her death. In Rome Plautianus lived in a domus (a typical Roman house of the upper classes) which perhaps had belonged to Annia Aurelia Galeria Lucilla or to a friend/relative of hers. She was the daughter of Emperor Marcus Aurelius and the wife of Emperor Lucius Verus. After the death of her husband in 169 and of her father in 180 she attempted to retain a political role, but her brother Emperor Commodus exiled her to Capri in 182 and in that same year he sent a centurion to kill her.
One understands why theatrical masks were often employed in the decoration of Roman houses to cheer up the mood of the landlords and their guests.