- Part One: the Saints
(Symbol of the Dominican Order in SS. Domenico e Sisto)

Since early Christianity, the issue whether sacred images should be worshipped in churches was highly debated. It surfaced again in the IVth century (Arians), in the VIIIth-IXth century (Iconoclasts) and in the XVIth century (Protestants). In all these crises the Popes maintained a position which considered the portrayal of saints a tool to promote religious feelings. To respond to the criticism of those who saw in these images a relic of Paganism, the Roman Church issued some rules which artists had to comply with when decorating a church with painting or sculptures. This page offers a few notes on the iconography of saints in Rome, another page shows how these rules focussed on the depiction of tortures and deaths.

In the late XVIth century the Counter-Reformation put a lot of emphasis on the representation of the martyrs, so the saints who had endured martyrdom, were always represented with a symbol of their martyrdom. In some cases these symbols helped the artists, in other cases they hindered them.
The heavy cross of the crucifixion endured by St. Andrew attracted many artists who portrayed the saint as a very muscular mature man and who applied to this subject some classical models (e.g. the statue of Laocoon). St. Simon was cut to pieces using a saw and he is always portrayed carrying a saw: this attribute however did not lend aid to the creativity of artists and in general statues and paintings showing St. Simon are rather dull if not grotesque (see an example). The martyrdom of St. Sebastian offered Renaissance and Baroque artists the opportunity for portraying a fine young man, in the same way that Apollo provided this opportunity to ancient Greek and Roman artists. In the case of St. Peter the recommended iconography made an exception and he is almost always carrying the two keys of Heaven. St. Paul holds the heavy sword of his decollation, but his attitude brings to mind a severe judge (see his statue in Ponte degli Angeli). 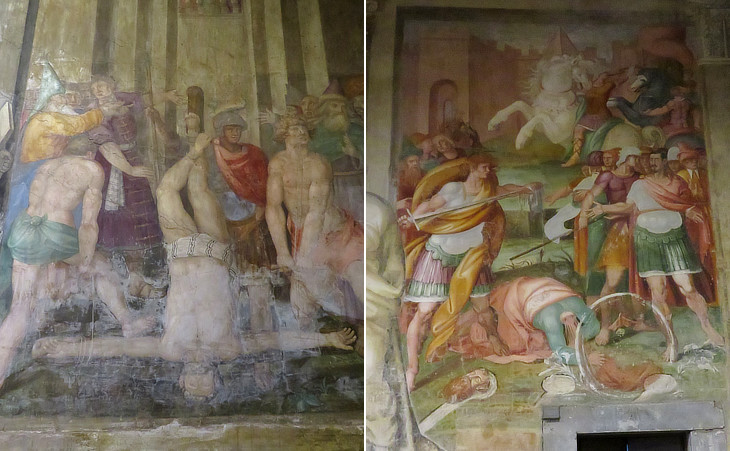 For the 1600 Jubilee, Cardinal Cesare Baronio, a leading theologian and historian commissioned thirteen large frescoes depicting the martyrdoms of the Twelve Apostles and St. Paul. Artists were asked to consider them as the official and faithful accounts of the martyrdoms and to base their works on them. The martyrdom of St. Peter had been depicted by Il Filarete in a bronze door of S. Pietro Vecchio in ca 1440. Caravaggio is one of the few artists who painted the martyrdom of St. Peter, but he found a way to add some drama to the scene. The painting portraying St. Paul shows the miracle of the three fountains, but it also shows the conversion of the saint on his way to Damascus, a scene which can be seen in many other paintings, e.g. at S. Marcello.

Mosaic showing St. Lawrence in S. Clemente (left) and an episode of his life in S. Giovanni dei Fiorentini by Antonio Tempesta (right)

St. Lawrence is perhaps the most popular saint in Rome. No doubt this is in part due to the atrocity of his martyrdom. St. Lawrence was roasted on a gridiron and he has been always portrayed carrying or next to a gridiron. Occasionally the way the artist portrayed the saint looks bizarre to a modern viewer. In the mosaic in S. Clemente the low fire and the gridiron under the feet of the saint are scarcely a reminder of his martyrdom, but they rather lead us to think that St. Lawrence was the clever inventor of a foot-warmer. 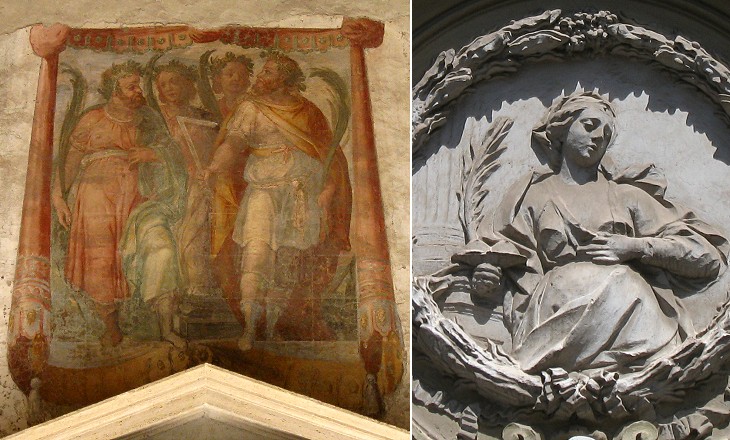 A saint carrying a palm frond means that the saint was a martyr. In many cases the palm frond is carried together with the specific attribute of the martyrdom (in the case of St. Agatha her detached breasts). The palm frond meant resistance to pressure, because it stood the strong winds of the desert, in the same way the martyrs did not give up their faith. The image used as a background for this page shows Sts. John and Paul holding palm fronds (a detail of the ceiling of SS. Giovanni e Paolo).

In the late XVIth century Counter-Reformation theologians recommended a very realistic depiction of the sufferings endured by the first martyrs. One of the best known examples of the effects of these recommendations is the cycle painted by il Pomarancio and Antonio Tempesta in S. Stefano Rotondo; Charles Dickens was horrified by the unpleasantness of some details. Even in the XVIIIth and XIXth century, as shown by the reliefs in the image above, artists did not spare gruesome details.

The Glory of St. Clement by Giuseppe Chiari in S. Clemente

However there are also examples where the reference to martyrdom are shown in a very gentle and indirect way. The large painting in the ceiling of S. Clemente shows an angel carrying the anchor which had been used for drowning the saint. Next to the angel the painter portrayed a cherub with the palm frond and the aureole (the light encircling the head of saints). A smaller lateral painting explains the link between the saint and the anchor.

A second, but perhaps more important reason for linking a saint to a specific aspect of his martyrdom was to make him immediately identifiable. For this reason also saints who had not endured martyrdom were associated with a detail which helps in the comprehension of who they were. St. Joseph was usually portrayed with the Virgin and the Infant Jesus, but occasionally he appeared alone or with other saints: in these cases he was portrayed holding some lilies, a reference to his chastity. Following a Byzantine practice, in many pre-Renaissance Roman mosaics and paintings (e.g. in S. Maria Antiqua), saints had their names written next to them. However only a small part of the population could read and therefore the majority relied on a self explaining iconography. St. Biagius was known for curing sore throats and thus he was portrayed laying his hand on a child's throat. The iconography of the four Evangelists was pretty uniform: they were portrayed in an inspired attitude in the act of writing and with a thick volume in their left hand. Since the first centuries of Christianity, each Evangelist was associated with a specific symbol (angel/Matthew, lion/Mark, eagle/John and bull/Luke). 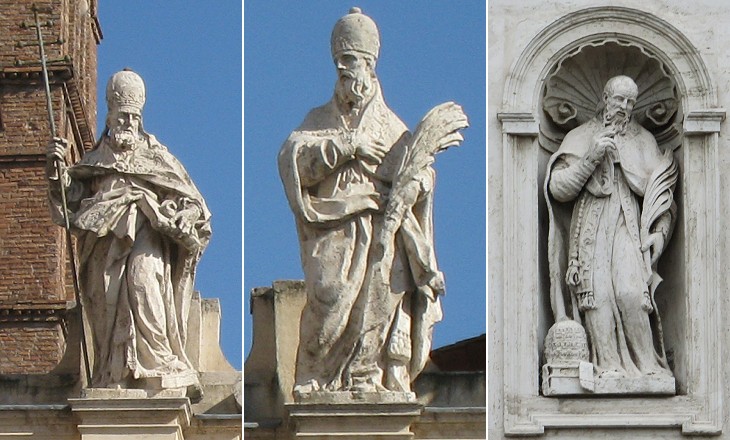 The triple crown of the popes dates to the early XIVth century, but, with the exception of St. Peter, usually all popes were portrayed wearing the triple crown or having it next to them. There was no attempt to portray the popes with the cloth they likely wore and even popes of the IIIrd century AD were portrayed wearing luxury XVIIth century robes.

St. Hilary was a French bishop who fought the heresy of Arius (IVth century AD). The little scene to the left of the saint is a metaphor of the saint's activity as it shows St. Hilary hitting a snake. St. Charles Borromeo was a very influential cardinal in the second half of the XVIth century: he is portrayed in a humble position because his motto "HUMILITAS" meant humility.

Move to page two: The Virtues.